Operetta “live” in Austria? Bühne Baden is one of the few places where you can actually experience the genre on stage this summer. In their semi-open-air historic “Sommerarena” the company offers Franz Lehár’s Die blaue Mazur in a new version without chorus and ballet, due to Corona restrictions. It’s also a performance without an interval. 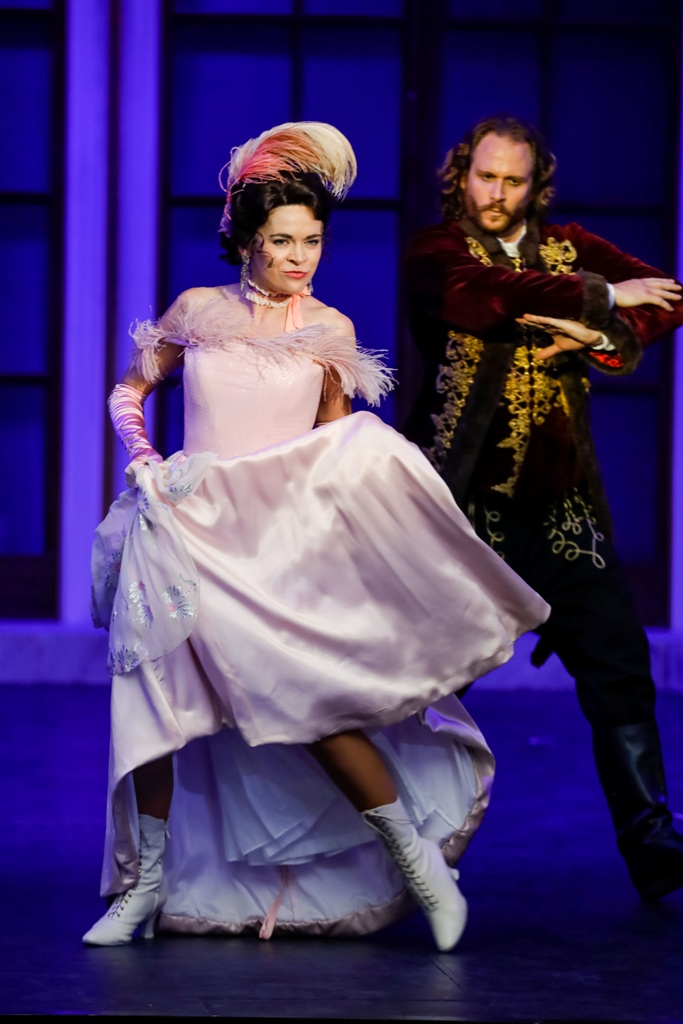 Because of Corona restrictions Baden is not able to put actors onto the stage for all the parts. Which is why comedian and emcee Oliver Baier will guide audiences through the story – and slip into the missing roles himself. 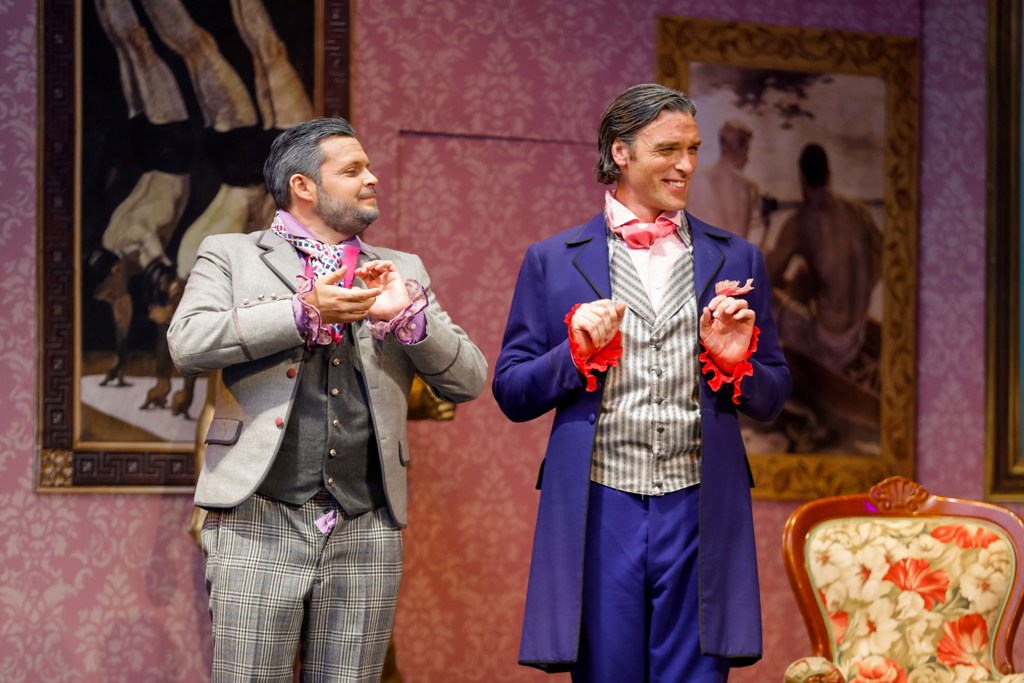 The story he presents is this: In a castle near Vienna a Jewish wedding is being celebrated. When the bride, Blanka von Lossin, unexpectedly hears about the wild previous life of her fiancée, a Polish count called David Szpilmanski, she leaves him, deeply hurt by the revelations. She finds solace with Baron von Reiger whose adopted son Benjamin leads a double life: at home he’s a model of propriety while his alter ego “Baruch” throws any such propriety over board together with his friend David. During a party at the Baron’s country estate, given in honor of Blanka, Szpilmanski appears unexpectedly, which leads to a showdown. On the one hand, Benjamin’s Jekyll and Hyde existence is revealed, on the other Szpilmanski manages to win back his ex-fiancee with a “Blue Mazur.” This is the plot summery supplied by Bühne Baden. 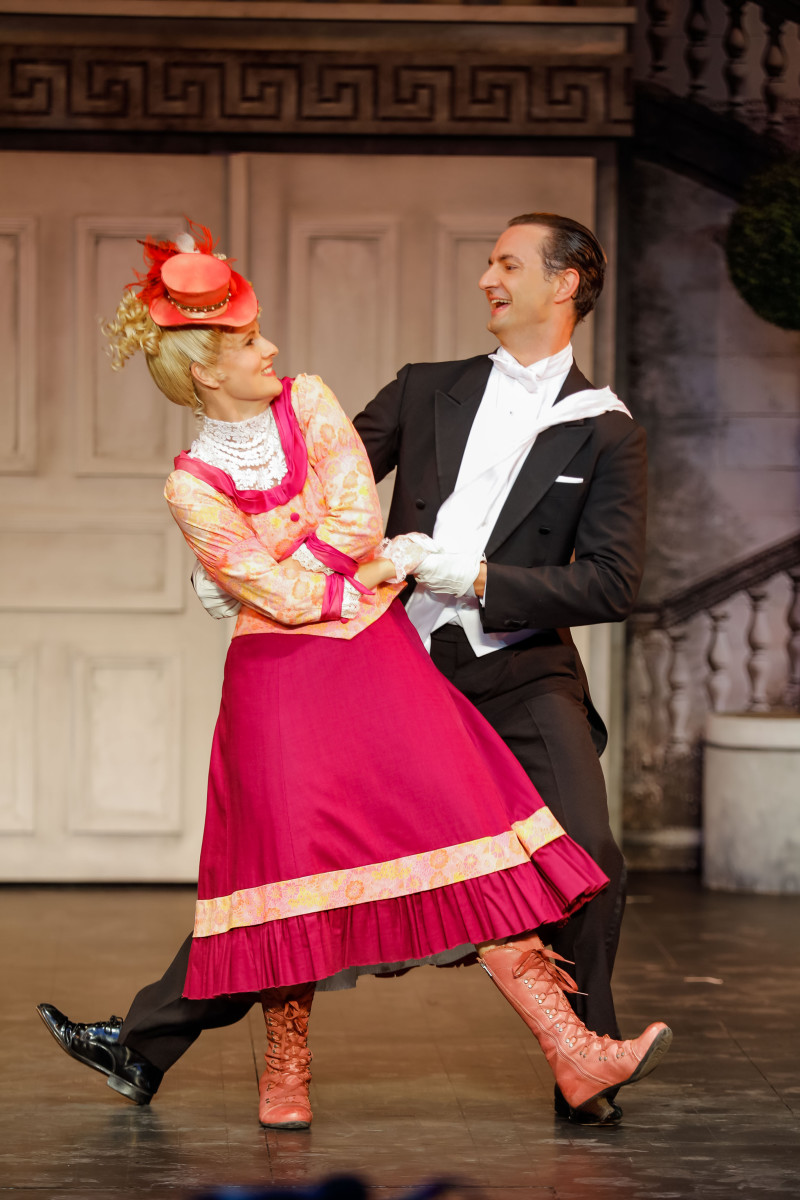 If you wonder what a “Mazur” is and why it is “blue” then you’re in good company. Audiences back at the world premiere at Theater an der Wien in 1920 also wondered. The answer is: “Mazur” is short for marzurka, a quick three quarter time Polish dance. The color blue, as explained in the libretto by Leo Stein and Bela Jenbach, refers to the last mazurka a Polish man dances with the woman he wants to conquer before getting married, it’s danced in the early morning when the skies are already blue and a new day is dawning. One of the reviewers in 1920 joked that the color might also refer to the last blue tram that can take you home before night is over in Vienna. The “tradition” of dancing a “Blaue Mazur” before the wedding is an invention of the authors and not an actual Polish custom, just like the presentation of the rose in Rosenkavalier is an invention by Hugo von Hofmannsthal.

Talking of inventions: that the story is turned into a Jewish wedding is one of the “exclusive” novelties Baden’s artistic director Michael Lakner has in store as stage director of this production. In the original the husband-to-be with the scandalous past is called Juljan Graf Olinski instead of David Szpilmanski. And the Jekyll and Hyde nephew is originally called Engelbert (“Engel” meaning “angel” in German), not Benjamin. The fact that Baden also presents this story of “boys being boys” as a very gay affair is another Lakner addition and personal touch. You’ll notice the homoerotic paintings on the walls in Christof Lerchenmüller’s sets. 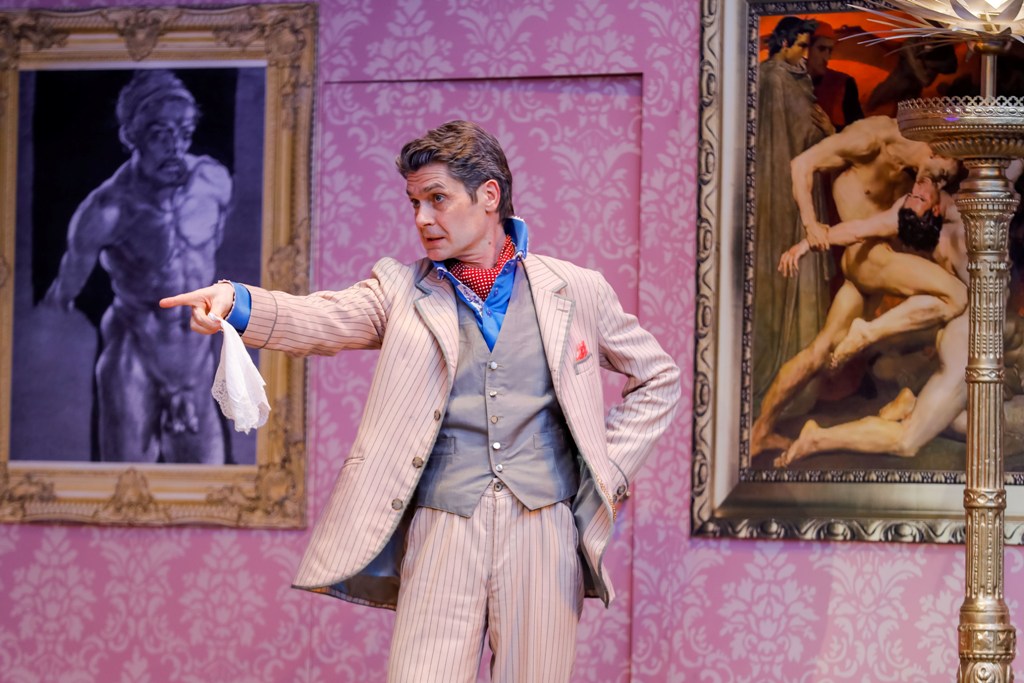 In his new Lehár biography, Stefan Frey links the act 2 dream sequence in Blaue Mazur (in which Blanka pictures a happier life for herself in glorious waltz time) to Korngold’s Die tote Stadt which premiered in the same year in Vienna. Frey also links the show to Arabella, the Strauss/Hofmannthal collaboration that didn’t quite turn out to be an operetta, as originally intended by the librettist. As with Arabella, Lehár offers his audience in the immediate post-war years, characterized by many changes and problems, a world of yesteryear in which no shimmies and foxtrots disturb the nostalgic idyll. Instead, Lehár wants to “ennoble light music” which he “never took lightly,” as critic Ludwig Hirschfeld remarked back in 1920. Or, as Stefan Frey puts it: this is a “k.u.k.” swansong to the lost world of pre-war aristocracy but also to a late romanticism that has passed its sell by date.

According to Bühne Baden this show is “a true treasure of the silver operetta era” and “homage to the Polish dance form” which inspired Lehár to write a “brilliant musical firework.”

The staging celebrates Lehár’s 150th birthday and commemorates the 100th anniversary of the show itself.

Among the soloists there is the wonderful young tenor Ricardo Frenzel Baudisch as Baruch/Benjamin von Blumenstiyn, while David Graf Szpilmanski  is played by Clemens Kerschbaumer. His fiancée is Sieglinde Feldhofer as Blanka. Franz Josef Breznik conducts.

For performance dates and more information, click here. And to read more on Michael Lakner and his Lehár enterprises, click here.