Today I got led (via my blonde burlesque ladies) into the world of the ‘spectacular theatre’. You know, those shows where the main elements were – and are – the tricky and glamorous scenery and scene-changes, the billion costume changes, and the nubile ladies, roughly described as ‘ballet’ (can you hold third position dear?), who filled the evening’s entertainment when there wasn’t a smidgin of story or dialogue and an incidental pop song going on. And in English and French terms that means the ‘opéra bouffe à grand spectacle’, in German the ‘grosse Feerie Spektakel’ and in American … well, let’s not quibble about precedence here, it’s that kind of show that was epitomised by the infamous The Black Crook.

So that’s where we are going. Did the dancers in shows of the grand spectacle genre actually dance as we would understand it? Or were they just glamorous girlies, lightly dressed, making movements that would cause their male audience to purr? Hmmm. Well, to start with, there don’t seem to have been any ballerinos. So the aim was clearly signified. But the principal dancing ladies were all from Europe. Well, they all had European names. Weren’t there any dancers in America? Morlacchi, Bonfanti, Palladino …

And even in the lower reaches … which is where I went today. Don’t ask me why. Ah, yes. I was scrubbing up the featured girls for one of Lydia Thompson’s shows and there was ‘Miss Schrötter’. Too weird not to be a real name. So I put away my singers, for a day, and went in search of the lowly Miss S. 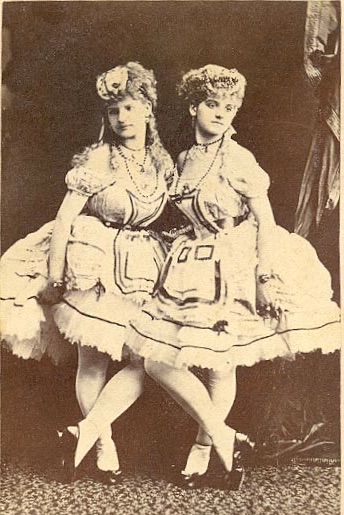 Well, I got more than I bargained for. There were three Fräuleins Schrotter. With or without umlaut. Carolina, Gabrielle and Henrietta, by any other spelling. Allegedly, they were imported to dance, with the multitude of others, in The Black Crook, like so many alleged others. And they may very well have been. They actually seem to have been trained-ish dancers.

Carolina turns up first to my gaze as a momentarily featured chorine in the production of The Forty Thieves at Niblo’s Garden in 1869: ‘A German Fay’. Then the ‘Misses Schrotter’, Carolina and Gabrielle, appear on the bills at the Theatre Comique, alongside Hattie Kelsey (sister of the better-known Lizzie and also, allegedly, a Crook rescapee), Lizzie Dark and, later, star dancer Annetta Galetti and a Blonde, Emma Grattan. 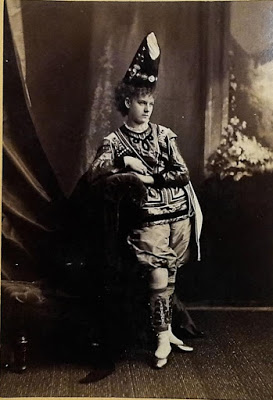 Third sister Henrietta joined them in the Edith Challis extravaganza Lalla Rookh at the Grand Opera House, I see them (two or sometimes three) at Pittsburgh, at the Olympic Theatre supporting Pauline Markham, dancing a ‘Sailors’ Festival’ at the Metropolitan variety house with Lizzie Kelsey, then a Can-Can, a Spanish Dance and a Flower Dance … Carolina seems to have got solo billing in Ahmed at the Grand Opera House, then they can be seen at the Tivoli and the Parisian Varieties …

Nearly a decade as second danseuses on the New York variety and occasionally theatre stages. I suppose it was worth leaving Vienna for?

I tried to find out what became of them, and I partially succeeded.

The others, I’m not wholly sure of, but there are very few Schrotters around in those years in New York, and when two of those few just happen to be a Carolina and a Henrietta …

The Carolina married an Austrian ex-army man by name Victor [von] Helly, of allegedly knightly extraction, had two children and lost him in 1891. She was still alive in the 1930 census ..

The Henrietta? Well there seem to have been two. One who married an Arnold Reifenstuhl and went off to Chicago to people the county with little Reifenstuhls; the other who became a Mrs Grunwald …

Carolina’s daughter became a lady in a shop. I imagine her mother and her aunts had had rather more fun dancing their way through life as young women.