Listening to Kander & Ebb’s The Visit – their adaptation of Durrenmatt’s Besuch der alten Dame – with an operetta ear, makes you notice one number in particular. Because the haunting ballad “You, You, You”, the main love song of the show, is so staggeringly reminiscent of Robert Stolz’s “Du sollst der Kaiser meiner Seele sein”. 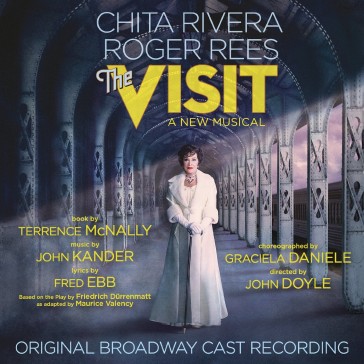 The cast album of “The Visit” with Chita Rivera.

The sentiment expressed, in both songs, is basically the same. Yet this is no mere copy-and-paste job in the Lloyd Webber tradition. Kander & Ebb give such new life to the famous melody and opening lyrics (“You, you, you, everywhere you, you, you, in every dream I dream there’s a spectre of you, you, you”) that I almost heard the whole number in stereo – mentally speaking. On the one hand, the various famous recordings of the Robert Stolz song ran through my mind, on the other Chita Rivera effortlessly brushed all of these memories aside. Because unlike Schramm, Popp & Co. she never just ‘sings’, she overwhelms you with character and a unique character voice. Here’s an older stage version of this song with Rivera:

Maybe it’s an age thing? But as time goes by, I find myself returning only to recordings that have the stamp of unique personality, while recordings of beautiful voices alone –no matter how beautiful they are – leave me bored even on first-hearing. By contrast, a Max Hansen or Fritzi Massary or Bouvril never fail to work their magic on me. And Chita Rivera is in that league.

The elements don’t fit together there. I’m sure the show could work much better in a different (nastier) and more radically orchestrated version. But the one-and-only Miss Rivera is such a stand-out presence – in the theater and on disc – that you’ll want to have the CD anyway.

The operetta world used to be full of ladies like her, and maybe it will be full of them one day again. If ever Chita Rivera decides to record a Robert Stolz album, my name would be the first on the pre-order list.

Since that’s unlikely to happen, though, even if you believe in miracles, the “You, You, You” is the closest you’ll ever get. It’s pure magic, up there with Marta Eggerth singing “Wien, Wien nur du allein” or Licia Albanese singing “One More Kiss”. The only difference: Rivera is in much better voice, or knows how to camouflage her vocal weaknesses better.