John Ellis (with permission of the author)

Gypsy Rose Lee has climbed the laddered stocking of the stripper world, tassel by tassel, and mounted a new summit in the field. The burlesque barker barks, “And now, Miss Gypsy Rose Lee, in a special salute to Christmas …” The curtain opens on a tableau a hung-over Ziegfeld might have dreamed up after an eggnog binge: the Gypsy stripper Christmas tree, 15 showgirls decked out in tinsel G-strings, faux burning-candle and bell hats, ornaments for boobs and a swag boa gracefully arcing from one crotch to the next, lush, hilarious — and unforgettable if you saw it. But you only saw it live if you saw the original 1959 production of Jule Styne and Stephen Sondheim’s Gypsy featuring Ethel Merman. Fortunately a photographer with a Technicolor touch snapped it. 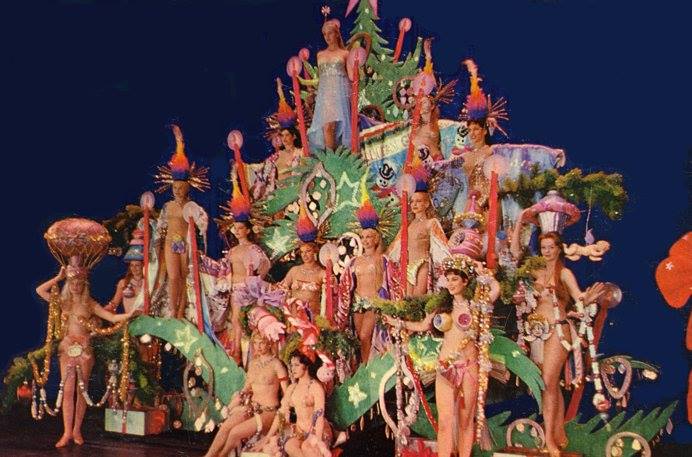 Willa Kim, personal assistant to Gypsy’s Tony-nominated costume designer Raoul Pène du Bois — and eventually a major designer in her own right, twice winning her own Tonys — recalls, “The tree was Jerry Robbins’ idea, and he had to fight for it. Arthur Laurents did not want a Christmas number in the show. They had terrible conflicts on this and other things. But of course Robbins did end up getting that box around his name on the theatre poster.” Book writer Laurents has cut the tree in all subsequent productions, several of which he has directed. 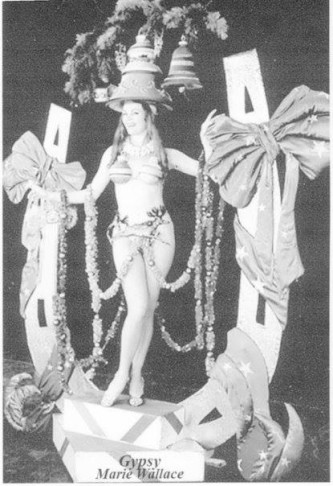 Marie Wallace, still vivacious and working 50 years later, remembers it vividly. “The Broadway minimum salary for chorus was $103.25 a week, but we got $125 — we all had agents. That was a big deal at the time, very prestigious. For that scene, I stood on a large horseshoe truck offstage. The big tree of strippers was revealed, and then I came scooting in on one side and someone else came out on the other. I held on for dear life. They told me to smile and look unconcerned, but with that huge bell on my head it was hard.” Another showgirl from the original production, Barbara London, says, “I walked out to the middle, with the swags swaying from my front. When we exited, I turned around and ‘Merry Christmas’ was written across my backside, surrounded by holly leaves.”

The tableau, designed by Jo Mielziner, was such a powerful image that it stood alone as the climax of the montage with no sung lyrics. It took the full “Adam and Eve/Ecdysiast’ sequence to replace it in subsequent productions.

According to Faith Dane, who originated the role of Mazeppa, Ethel Merman would watch it from the wings most nights, a rare thing for a star to do. Wallace recalls, “They hired seven showgirls just for the tree. The only other place they used us was as extra bodies in the hotel scene with the animals. The other girls on the tree were the chorus — the Toreadorables, you know — and Faith. We sang as an angelic chorus as we came on. That’s still in the score. Gypsy [Sandra Church ] wasn’t really in it. We did our thing, and she came back on with ‘And if you’re real good … .’ I didn’t know whose idea it was. The way musicals were rehearsed then was they kept you separate: the dancers, the singers, the showgirls, you had separate calls. They didn’t want us around when they rehearsed the singers and, of course, we were young. We didn’t want to be sitting there listening to what would become the greatest musical in the history of the theatre. I wanted to get out, study Shakespeare and modeling, when they didn’t need me at rehearsal.”

London adds, “I asked if I could watch the musical rehearsals, and I just sat there quietly, but I made Ethel nervous. ‘Who is that girl?’ So they told me I couldn’t come any more.” 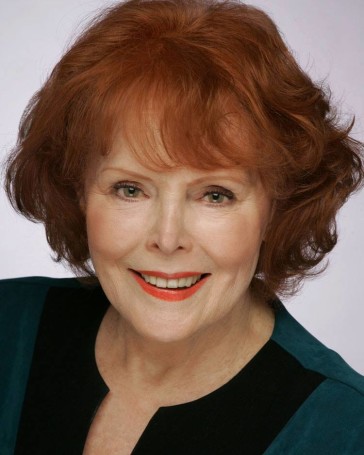 “Because shows previewed out of town then,” Wallace says, “we were in Philadelphia for five weeks, extended to six. Before leaving for New York we did a gypsy run-through. This was a standard, one-time, complete performance without costumes for invited industry friends, fellow dancers and singers and theatre big wigs, always on the Sunday afternoon before departing. Theatres were dark on Sunday then. At that time any business conducted on Sunday was considered sacrilegious, even in New York.

“Well, the Gypsy gypsy run-through was incredible,” Wallace continues. “We did it at the Winter Garden. When Merman entered from the back of the house, with ‘Sing out, Louise!’ they weren’t expecting that. The standing ovation went on for at least five minutes. We all had tears in our eyes. Merman stood frozen, absorbing this as it went on and on until she finally said, “Thanks!” so they’d stop and she could get on with it. It was an amazing evening. During the stripper tree, we threw Christmas balls into the audience, just that one night, and people collected them. Never again. Maybe the legal people figured out we might hit someone in the eye and they’d sue us.”

London remembers when the showgirls were nearly let go during the Philadelphia previews. “We were told that we weren’t on call for two days, which were two performance days. David Merrick [Gypsy‘s producer] heard that they were doing the tree without us. ‘Not without my showgirls, they’re aren’t!’ We were back in the next night.” One of the showgirls was the late Carroll Jo Towers, who stood 6-foot-2-inches and wore a huge headdress. London recalls that “Carroll was not well coordinated. She was so tall, and Robbins would get very angry and shout at her. ‘You’re like a giraffe!’ Then he’d turn to me. ‘Teach her how to walk!’”

London knew Sondheim from West Side Story. “I was engaged to Michael Calin then, who was featured in it [Mickey Calin played Riff], and I knew Steve’s father, who was a big manufacturer in the garment district. His dad would actually give me jobs modeling his clothing when I wasn’t in a show.” When Gypsy reopened after the summer hiatus, the showgirls were let go, running with a trimmed-down tree of strippers during the fall of 1959 at The Imperial Theatre through the spring of 1960 and the national tour.

Notable among Gypsy’s chorus girls was a young Marilyn Cooper. She later won a Tony for Woman of the Year, a minor sensation as the frumpy housewife who shared the eleven o’clock number “The Grass is Always Greener” with Lauren Bacall and later Raquel Welch, performing it on the Tony Awards telecast. “Coopie,” as she is warmly known, retired after a long career. “Oh, honey,” she observes today, “I don’t remember anything about Gypsy.”

The other chorus girls and dancers included Joan Petlak, now a California health practitioner, and Merle Letowt, who became Merle Louise in her next production, Sondheim and Furth’s Company, when she originated the role of Susan. (Her other Sondheim credits include originating the roles of the Beggar Woman in Sweeney Todd and Cinderella’s Mother in Into the Woods.) 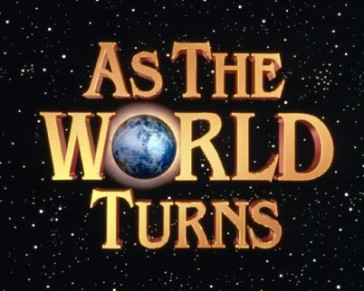 Logo for the TV show “As The World Turns.”

Imelda De Martin appeared in several major shows before and after, including My Fair Lady. Marilyn D’Honau’s long career includes Applause. Patsy Bruder starred for 35 years on the soap opera As the World Turns. Among the showgirls, besides Wallace and London, Theda Nelson is now a successful textile designer in Australia, and Gloria Krist, who appeared in Forum, is retired in Florida. Wallace’s career includes The Beauty Part with Bert Lahr and the movie star in Sweet Charity with Gwen Verdon; she also starred in several seasons of the gothic TV soap opera Dark Shadows. London’s long career includes appearing in Forum and Funny Girl with Barbra Streisand.

Merman was every inch the star with the showgirls. The entire cast was summoned to her dressing room at Christmas, and her assistant bellowed out their names from a checklist as they entered one by one. Merman said, “Merry Christmas, Marie!” and held out a package. “It was a bottle of perfume,” Wallace remembers. “Her then husband owned a perfume factory.” A lot of stars then and now had very warm relations with the company members, “but Ethel was aloof; she wouldn’t have remembered my name was Marie. That’s why they used the list.” London recalls, “That perfume smelled awful!”

The younger members of the chorus, bored when not onstage, took to dropping water balloons from the windows of their fifth floor dressing rooms on people below — until the stage manager threatened to fire them. 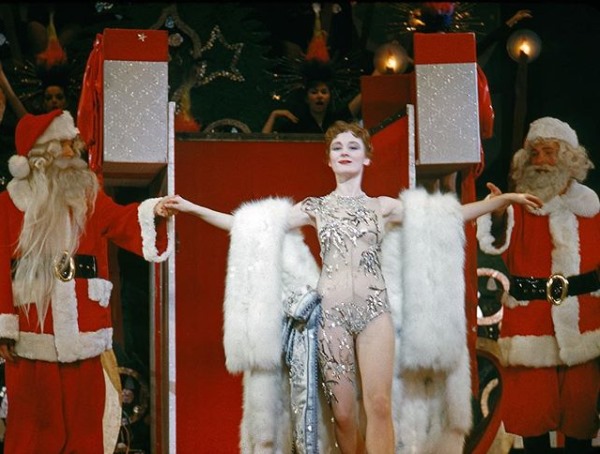 Wallace got in trouble one day when she decided to do a clown painting during the first act. She made her face up clown white and was working from her reflection. The stage manager walked in and erupted. “I’m not on till the second act!” she protested. But she never attempted whiteface again.

Faith Dane had been using her trumpet act, capped by blowing the instrument with her head between her legs, for years. When she used it in her audition for Gypsy with John Wallowitch on piano, he recalls, “It was one of the most spectacular auditions ever in the history of Broadway theatre. It was hysterical. Gypsy Rose Lee laughed so hard her eyelashes fell off. Even Sondheim cracked a smile.” Sondheim told a theatre discussion panel years later, “That went right into the show.”

Though Dane and her act grew into the featured role of Mazeppa, she was also planted squarely on the stripper tree, disguised in part under a huge candle headdress. A gifted portrait painter, Dane set up with her brushes in the chorus dressing room during Gypsy’s first act. Soon Wallace, London and others began painting too, propping up their canvasses against the mirrors. Dane executed a startlingly accurate portrait of Merman, detailing her exaggerated eyelashes and makeup. Merman blew up when she saw it. “How could you paint me like this!” Eventually there were so many paintings that a charity sale was held in the garden of an adjacent hangout, as well as a later exhibit at Macy’s. Merman bought two of Wallace’s paintings. (It appears in her memoir, On Stage and In Shadows.) 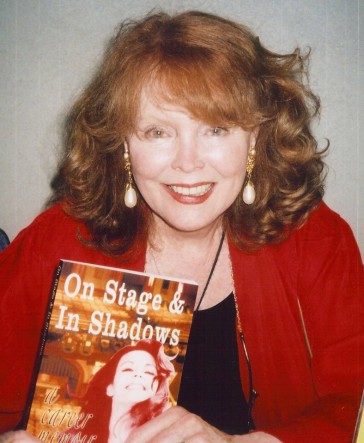 Marie Wallace holding her book “On Stage and In Shadows.” (Photo: Private)

Dane’s incorporated trumpet act in “You Gotta Get a Gimmick” stopped the show nightly. She later sued David Merrick for royalties and choreographic credit — and lost. To this day there is a Faith Dane-inspired clause in actors’ contracts preventing any lawsuit for business created in rehearsal. Dane recreated the role of Mazeppa in the movie version of Gypsy.

Hiring enough showgirls to fill a stage with a human Christmas tree is the kind of grand producing gesture of a less cost-conscious era of Broadway. To do it now would be much more expensive. But given the remarkable talents displayed on that 1959 stage, it’s a pity the Gypsy stripper Christmas tree has never been re-erected. The crass consumerism of the holiday was never more deftly skewered.