The popularity of Candide in Germany can be attributed to several factors: the continuing high profile of Leonard Bernstein, the piece’s affinities with operetta, and the sheer memorability of many of its numbers. A classic musical that blurs the lines between Broadway and opera, Candide was tackled this season by Matthias Davids at the Staatsoper Hannover, a theatre at which he has directed several impressive re-conceptions of musicals (most notably, Lady in the Dark).

His Candide, like his previous work, is rigorously conceived, cleverly designed (by Mathias Fischer-Dieskau), and deeply musical (the musical direction is by Karen Kamensek). With the orchestra seated onstage, the production uses projections; extravagant costuming that nods to the eighteenth century; and upstage, a giant, movable rope construction that transforms from house to ship to palace. The latter is echoed ingeniously at the beginning and end of the piece by a game of cat’s cradle played by Candide and Cunegunde. But Candide is far more than a children’s game and the production revels in sexual by-play and comic-book style, farcical escapades.

Under Kamensek’s baton, the Hannover orchestra plays spiritly, although their seating on stage sometimes overemphasizes the brass and woodwinds. On the other hand, the placement of the orchestra front and center allows the piece’s rich textures to shine forth. Most important, Davids’s staging is finely calibrated to highlight and complement the score. In fact, the staging—paradoxically—made me listen to the music more closely than I ever had before and marvel anew at Bernstein’s musical dramaturgy.

Given the need in the German state-supported opera houses to feature members of the permanent ensemble, the cast was more variable.

Although a choreographer was credited in the program (Simon Eichenberger), several numbers, especially “I Am Easily Assimilated,” would have been greatly enhanced by actual dancing. The stand-out performance was unquestionably Ania Vegry as Cunegunde, whose “Glitter and Be Gay” was beautifully shaped and excitingly dramatized. Never have I heard the opening Valse Lente more caressingly phrased. Yet Vegry also has the gleaming top notes and the comic ingenuity to exploit fully the fiery fioritura that forms the aria’s climax. Also notable were Frank Schneiders as Voltaire/Pangloss, Diane Pilcher as the Old Lady, and tenor Patrick Jones in various comprimario roles. More problematic was the performance of Sung-Keun Park in the title role. A passable tenorino, Park has the requisite range but was unable to produce the sweet pianissimi required for “It Must Be So” and “Candide’s Lament.” Park, moreover, is not a natural actor and his German and English (the book was translated into German while the songs were sung in the original) sounded as if they had been memorized syllable by syllable. This deficiency produced the curious effect of making the title character seem almost as if he had been transported to earth from another planet, a not altogether wrong choice for Broadway’s most famously incurable optimist. 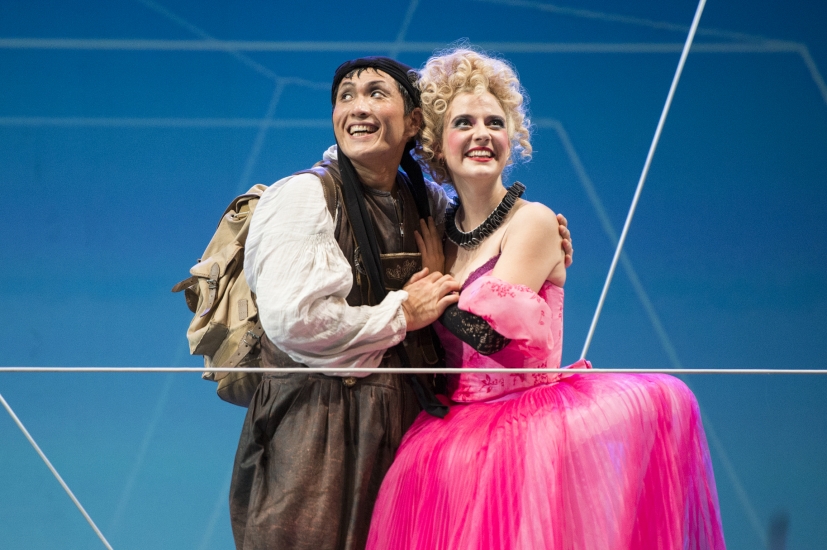 Despite the variability of the performances and lack of real dancing, Candide yet again proves Matthias Davids’s skill as one of the most thoughtful and musically literate directors of German-language musical theatre. He knows when musical gestures need to be illustrated dramatically and when to let the music speak for itself. “Make Our Garden Grow,” one of the most radiant finales ever penned, was so effective because it was so still. The audience’s cheers of approval were a sign that despite the imperfect casting, the Staatsoper Hannover continues to produce musicals on a conceptual and musical scale that Broadway itself can no longer match.