Perhaps it was only a matter of time before someone hired choreographer Otto Pichler to stage an operetta all by himself. Pichler, you will recall, is Barrie Kosky’s partner-in-crime in Berlin and elsewhere, the man who creates the dazzling and dizzyingly erotic choreographies with his team, half-nude dancers doing half-nude steps that have become the trade mark of nearly all of Kosky’s operetta spectacles. Pichler also choreographed Csardasfürstin in Cologne some years ago, which had a cross-dressed Sylva Varescu and showed how difficult it was in the 1950s for the ‘good’ son of the family to bring home a transvestite as his bride. In Cologne, stage director Bernd Mottl kept this interesting re-interpretation of who is an “outcast” and why on the conventional Marika Rökk side, happy with some marvelous song-and-dance scenes with Christoph Marti in the title role. Now Mr. Pichler himself, in full control of the evening, opts for an even more radical approach, turning the “thousand singing angels” of the finale into “angels of death.” 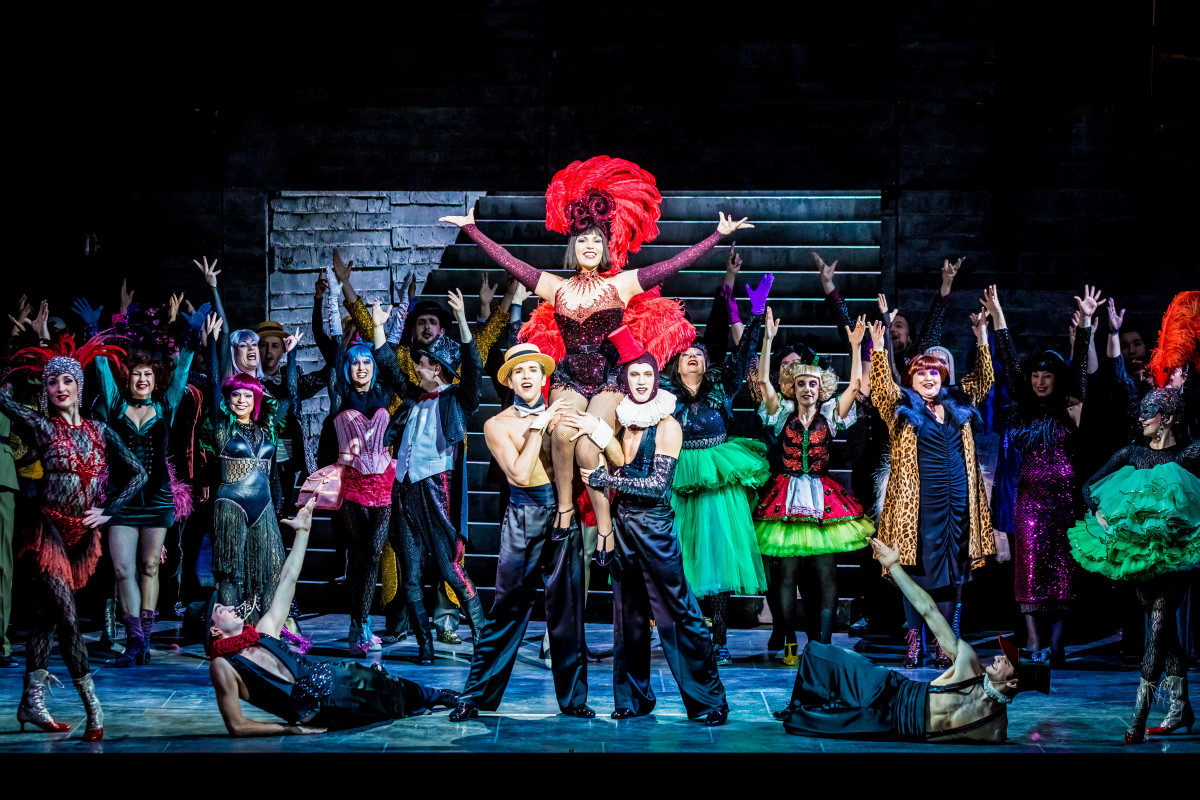 In the new Pichler staging, the Budapest Orpheum where Sylva and her troupe of dancing girls appear is set in a dingy underground location, reminiscent of Berlin’s famed techno paradises where the queer avant-garde celebrates with hard beats and even harder drugs. In contrast, the world of the Lippert-Weylersheim home looks like a left-over from some DDR museum – pompous socialist architecture. A clash of cultures is inevitable, even without transvestites or other cross-dressers. 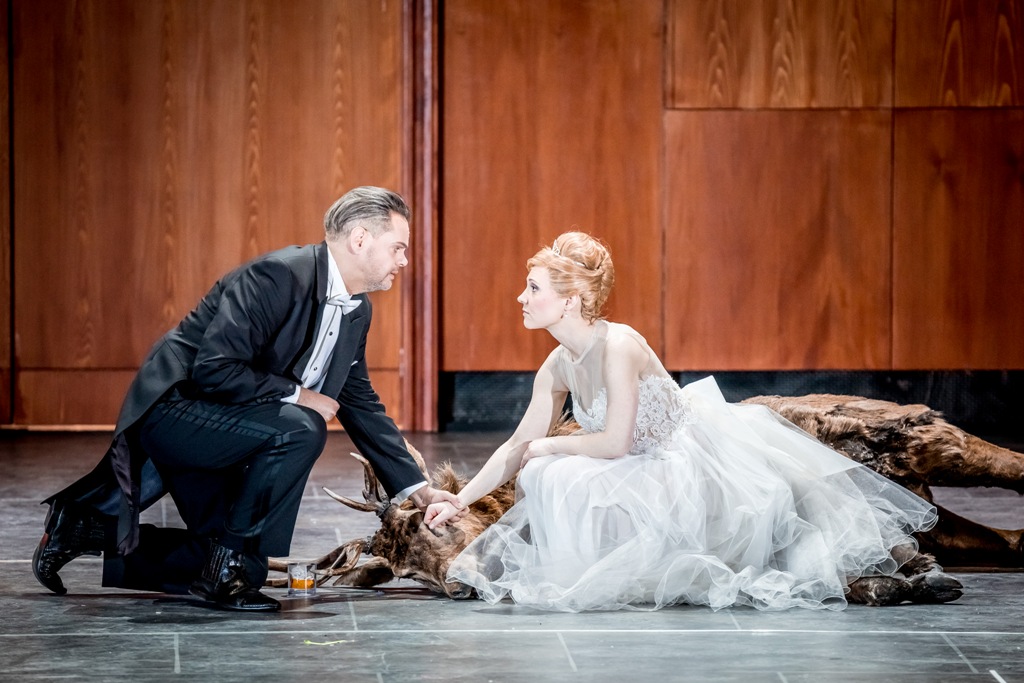 Edwin and Stasi in the Madeburg production of “Csardasfürstin” by Otto Pichler. (Photo: Andreas Lander)

In the original libretto it’s a comic final relief that Edwin’s mother Anhilte – so ultra-conservative and insisting on social status by birth alone – turns out to have been an Orpheum dancing girls herself, before she married upwards and erased all traces of her prior existence. When she admits to her past, it’s a shock for her second husband, Count Lippert-Weylersheim, who had no idea whom he had brought into his respectable family.

Pichler turns this comic ending into a tragedy, to remind modern-day viewers that “Die Csardasfürstin” is about very real social issues and very real discrimination.

In Magdeburg, Fürst Lippert-Weylersheim (Peter Wittig) uses the pistol the comedians had used in act 3′s famous telephone scene to actually shoot Edwin (Johannes Wollrab) and Sylva (Judith Kuhn/Raffaela Lintl) after he finds out about Anhilte. The shame seems to be too great to have “beschmirched” the family reputation once, and to see it “beschmirched” once more by Edwin and Sylva. 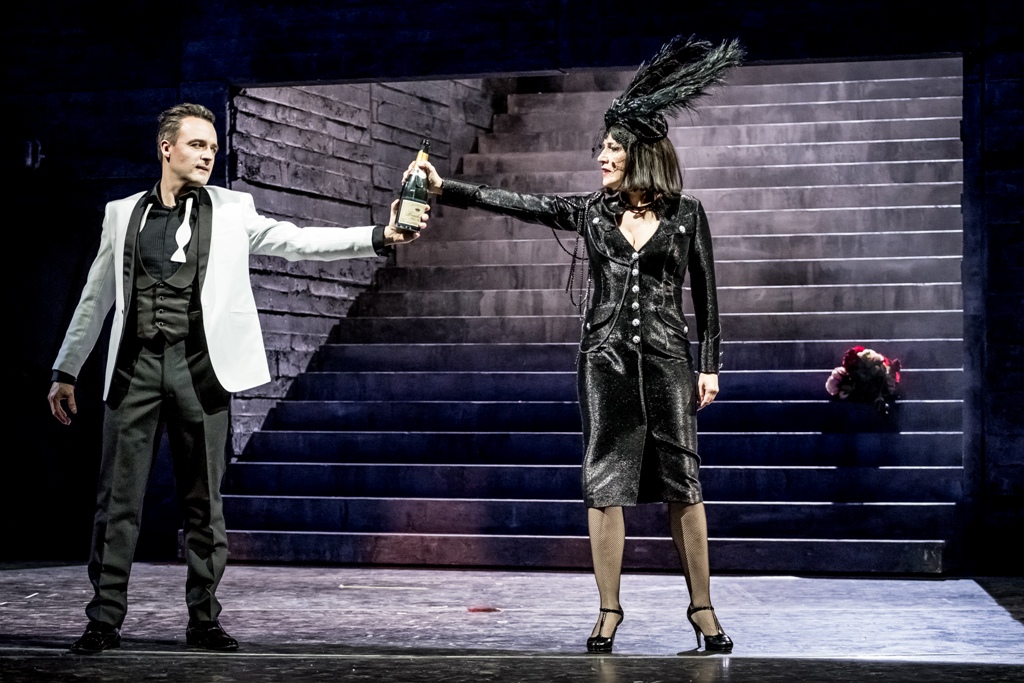 The underground world of the Orpheum in “Csardasfürstin” in Magdeburg. (Photo: Andreas Lander)

Such “honor killings” are not something typically associated with the DDR, post-socialist societies, not even the right-wing AfD particularly strong in Eastern Germany. But the “killer ending” reminds us – in an abstract way – that there is more to the story of the society boy and the underground party girl than a never-ending string of well-know operetta hits in ¾-time. Even if the finale is still “Tausend kleine Engel singen.”

According to the local newspaper Volksstimme, the opening night was a success. Critic Rolf-Dietmar Schmidt concludes: “The unexpectedly changed ending turns this operetta into a moral portrait of the time [Sittengemälde] and in consequence lifts it to a new quality level. Doing so is only consequent, since Emmerich Kalman saw his show as a farewell to an era that came to a close with World War 1. This production is something very special. It polarizes. Which is why noone should miss seeing it.“ 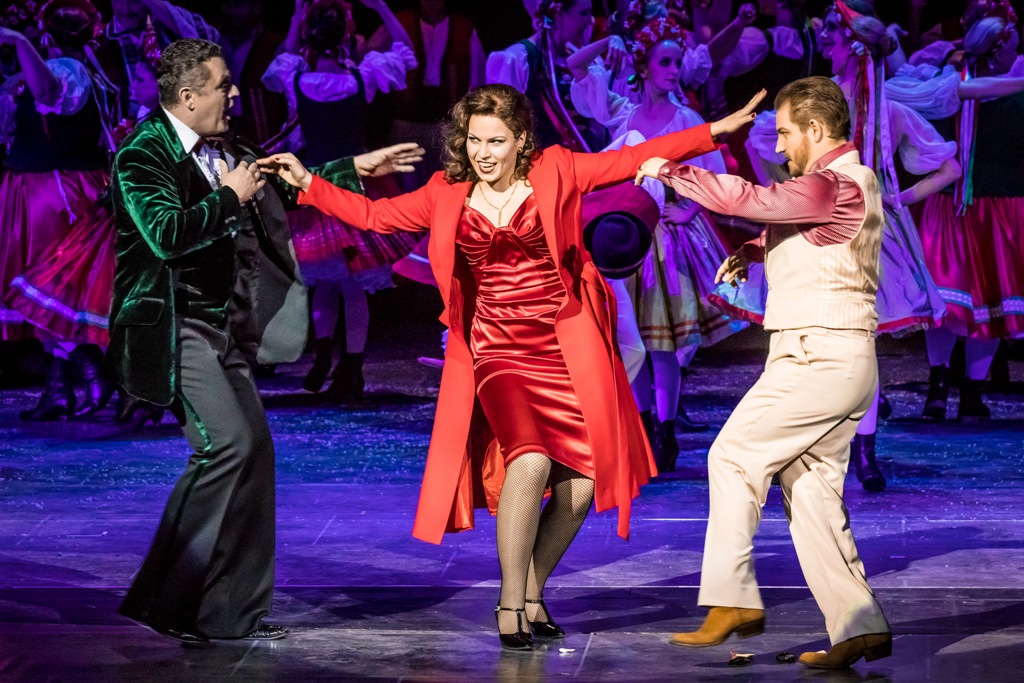 Mr. Schmidt does not say which time period is being “portrayed” here, the pre-WW1 world Csardasfürstin is originally set in, some 1950s or 60s stuffy East German world, or the 1990s when techno was “hot” – or the present with its “family values” and anti-gender-maintreaming conservative back-lash? If you want to find out for yourself you need to catch one of the upcoming performances in Magdeburg. There are six more coming up until June 2017. 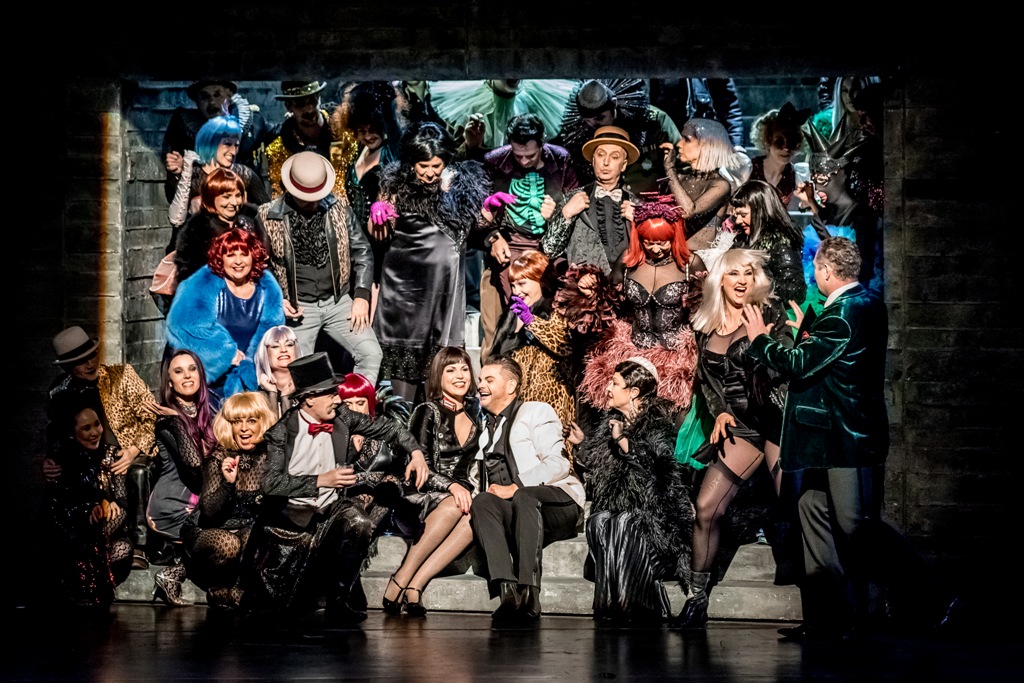