Die gelbe Jacke, written to a libretto by the partner of Lehár’s earliest success, Der Rastelbinder (1902), and of his greatest triumph, Die lustige Witwe (1905), and produced by Karczag at the Theater an der Wien in 1923 (9 February), was another version of the East-has-difficulty-meeting-West theme so popular in such turn-of-the-century works as The Geisha. Hubert Marischka appeared as the Chinese Prince Sou-Chong Chwang whose marriage to the Viennese Lea von Limburger (Betty Fischer) threatens to founder when she cannot cope with oriental customs. Louise Kartousch as his sister, Mi, was paired with Josef König (Claudius von Wimpach) in a parallel soubret story. 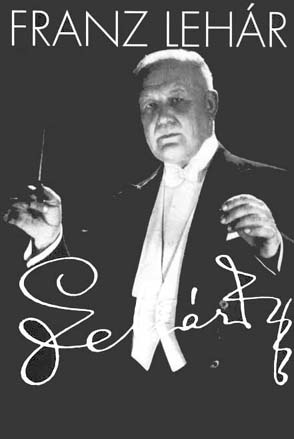 Franz Lehár as an old man, conducting his own music.

Die gelbe Jacke won some appreciative comments for its attractive mixture of Chinese and Viennese tones (one critic apparently nicknamed it Monsieur Butterfly) and it proved a tidy, unspectacular success, running for three months and 98 performances at the Theater an der Wien. Just before its closure there, it was produced at Budapest’s Király Színház (A sárga kabát, 5 May 1923) with Tivadar Uray, Erszi Péchy, Árpád Latabár, Márton Rátkai and Hanna Honthy starred. It was not a success, however, to compare with the previous year’s Frasquita or with the Theater an der Wien’s other recent Operetten, Der letzte Walzer, Die Frau im Hermelin or Lehár’s own Die blaue Mazur and Wo die Lerche singt, and it was positively overshadowed in the two following seasons by the huge successes of Gräfin Mariza and Der Orlow, all of which may help to explain why the myth has developed that Die gelbe Jacke was a thorough failure. It wasn’t. It just wasn’t a big hit.

When Lehár moved soon after into his tenor-dominated Tauber era of writing, Die gelbe Jacke was given a second chance. Tauber’s greatest successes of the 1920s had been in Berlin, and the Rotter brothers of the Berlin Metropoltheater, who had hosted the tenor’s successes in Paganini and Friederike, asked the composer for another Tauber vehicle. Never loath to re-use the scores of his less enduring shows, Lehár had already produced a second version of Wiener Frauen and third versions of Der Göttergatte and Der Sterngucker, and now, to follow his successes with the lushly sentimental Paganini, Der Zarewitsch and Friederike, he decided on a romantic tenor remake of the tale of either Endlich allein‘s mountaineering prince or of Die gelbe Jacke‘s Chinese one.

It was the Chinaman who ultimately got the nod, but instead of returning the original libretto to Léon to be Tauberized, Lehár instead handed the seven-year-old work to Ludwig Herzer and Fritz Löhner, the librettists of Friederike, for a rewrite.

He himself revamped part of his score, principally to turn the rôle of the Prince into the kind of all-singing, all-emoting Tauber-Rolle which the success of the singer’s previous Operetten had made a sine qua non.

The most obvious alteration to the Die gelbe Jacke book was the exchange of Léon’s original reconciliatory ending for the now obligatory and fashionably unhappy one, in line with the bruised-to-brokenhearted final curtains featured in the three last Operetten. The most obvious change in the score was a large new number for the star, written in the ringing style of Paganini‘s `Gern hab’ ich die Frau’n geküsst’ or Friederike‘s `O Mädchen, mein Mädchen’. `Dein ist mein ganzes Herz’ was to turn out to be the most successful of all Lehár’s throbbingly romantic songs for Tauber.

In Das Land des Lächelns (the title was already an improvement), the impassive Prince Sou Chong (Tauber) weds Viennese Lisa (Vera Schwarz) and takes her back to his homeland. There she discovers that the Prince is expected by custom to take Chinese brides as well. He is unable to defy the traditions of his country and she, in spite of her love for him, cannot bend to them. Aided by Sou Chong’s sister, Mi (Hella Kürty), a trapped little soubrette who longs for a taste of the freedom that she sees Western women have, and by her Viennese friend Graf Gustl von Pottenstein (Willi Stettner), she plans an escape. When the Prince catches the fleeing foreigners he realizes that it is better to let Lisa go. Broken-hearted but impassive, he remains to rule his country. 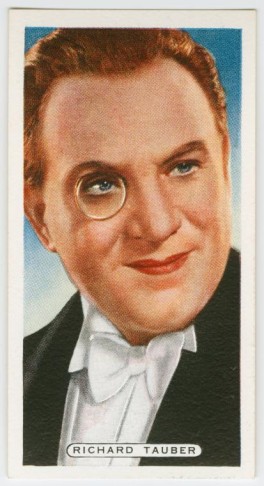 Although the applause-tugger of Tauber’s rôle was the new song, the part of Sou Chong contained some less obvious but more beautiful pieces, notably his two first-act songs, the philosophical `Immer nur lächeln’ and the gentle love song `Von Apfelblüten einen Kranz’, as well as some ringingly dramatic moments in the long and two-handed second-act finale which the tenor shares with the soprano. The prima donna, too, had many fine moments, ranging from her light-hearted first-act entry song and the tiptoeing duet `Bei einem Tee à deux’ to the romantic duet `Wer hat die Liebe’, but it was the powerful light-operatic `Ich möcht wieder einmal die Heimat seh’n’, in which Lisa pours out her longing for her homeland in tones which have nothing to do with the usual Do-you-remember-Vienna type of song, which was her great moment and is, in spite of all the tenorizing propaganda to the contrary, arguably the musical highlight of the score. The soubrette rôle of Mi was equally well parted, the little princess’s shy longing for Western freedom, expressed trippingly in the song `Im Salon zur blau’n Pagoda’, and her gently comical duos with Gustl (`Meine Liebe, deine Liebe’, `Zig, zig, zig’) contrasting breath-catchingly with the powerful emotions and big singing of the other two principals.

The Berlin première of Das Land des Lächelns was an outstanding success, the hit song quickly became a mega-favourite, and productions of the show flourished throughout Germany in the years that followed, with Tauber guesting as the star in several of the main centres. Hungary, as usual, was first off the mark with a foreign production, opening A mosoly országa at Budapest Operaház with Ferenc Székeleyhidy (Szu Csong), Margit Nagy (Liza), Júlia Orosz (Mi) and Lajos Laurisin (Feri Hatfaludy), just a few days before the Theater an der Wien premièred their Viennese production, with Tauber again starring opposite Vera Schwarz and Hella Kürty again as Mi. The two original stars did not stay long with this production, and Margit Suchy and Otto Maran soon succeeded to their rôles, whilst Luise Kartousch, the original Mi of Die gelbe Jacke, took up the new version of her old part during the 101 performances that Vienna’s version played. The production was reprised for a fortnight the following year, but, in spite of this limited first Viennese run, Das Land des Lächelns established itself as a repertoire favourite in Austria just as it did in Hungary.

Paris was once again beaten to the nod by the Belgians who produced the first Le Pays du sourire (ad André Mauprey, Jean Marietti) at Ghent (Théâtre Royale, 1 April 1932) with Louis Izar and Germaine Roumans in the leading rôles, but the French production, mounted six months later, with Willy Theunis and Georgette Simon starred, was a prodigious success, securing Le Pays du sourire a prominent place in the permanent repertoire of the French musical theatre where it has remained, through regular revivals, ever since.

In spite of its success in Europe, however, the Operette did not catch on in Britain or in America. Tauber himself introduced his show to London’s Theatre Royal, Drury Lane, with Renée Bullard as his Lisa and Hella Kürty again as Mi, but The Land of Smiles (ad Harry Graham) failed to appeal. It was not simply Tauber’s well-publicized absences from the cast that deterred British audiences of the dawning 1930s from patronizing the show, it was rather that their pleasure was found in the then-popular dance-and-laughter musicals and their taste at the time did not run to a Very Big Romantic Operette. The show closed after 71 underfilled performances. Tauber repeated his Sou Chong in London in 1932 (Dominion Theatre 31 May) and again ten years later (Lyric Theatre 18 June 1942), each time paired with Josie Fearon and Miss Kürty, but the show never won a London run. In 1959 it was produced by the Sadlers Wells Opera Company (w Charles Craig, Elizabeth Fretwell, June Bronhill, ad Christopher Hassall) but it did not remain in their repertoire.

In America, Graham’s version was further adapted (ad Harry B Smith, Edgar Smith, Harry Clarke) and the resultant piece produced as Prince Chu Chang with Clifford Newdahl and Gladys Baxter starring in a hideously bowdlerized tale in which the Prince and Lisa did not actually get married in Act I at all, and she ended up finding consolation in the arms of Gustl. It folded on the road.

It was only after a St Louis Muny production and a second prematurely folding stab at a Broadway version (26 December 1932, w Charles Hackett, Nancy McCord) that the Shuberts finally got yet another adaptation (ad Ira Cobb, Karl Farkas, Felix Günther) of the show to Broadway in 1946 under the title Yours is My Heart. 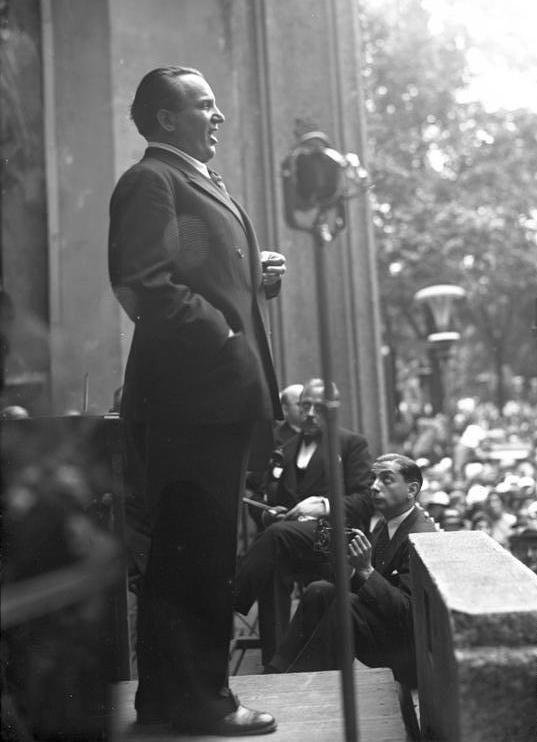 Richard Tauber singing at a charity concert in Berlin in 1932.

Tauber put his Das Land des Lächelns on film soon after the show had been produced, and in 1952 another version (scr: Axel Eggebrecht, Hubert Marischka), with the music adapted by Alois Melichar, was produced with Jan Kiepura and Marta Eggerth starring.Prince Sou became a singer (!) who falls in love with his Lissy over a duet and the pair produce a little Chrysanthemum on their way to their unhappy ending. Ludwig Schmitz featured as Chief Eunuch Kato. A third film, with René Kollo and Birgit Pitsch-Sarata featured was issued in 1973.

Das Land des Lächelns remains a prominent fixture in the repertoire in Germany and in Austria, where it was played at the Staatsoper in 1938 (again with Tauber) and from 1985 at the Volksoper where Siegfried Jerusalem and Nicolai Gedda have both appeared at various times as Sou Chong. The newest production, in 1996 (28 September) featured Johan Botha and Silvana Dussmann. It also holds a continuing place both in France and in Hungary (ad Zsolt Harsányi), where it was remounted a recently as 1998 at the Budapesti Operett Színház (26 June). However, in spite of regular exposure through recordings and broadcasting, and the wide popularity of its tenor bon-bon, The Land of Smiles remains generally unplayed in English-language countries.