Millöcker’s most successful Operette and, indeed, one of the very few 19th-century Viennese pieces which do not have the fashionable name of `Strauss’ attached to them which have survived on to the modern stage, Der Bettelstudent was one of the triumphs of the European musical theatre of its era, and was played regularly throughout the Continent for many years. Part of the show’s attraction was that it was based on a particularly strong main plotline, one which borrowed elements from both Sardou’s Fernande and Edward Bulwer-Lytton’s celebrated The Lady of Lyons in its construction — and also had airs of Scribe and Halévy’s 1841 opera La Guitarréro — but which has lasted longer than either of its neverthless celebrated and once hugely popular models. The operetta with a libretto by by F Zell and Richard Genée premiered at the Theater an der Wien on 6 December, 1882. 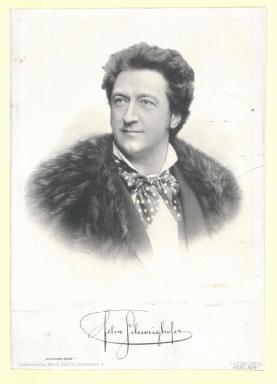 Colonel Ollendorf (Felix Schweighofer) of the ruling Saxon army has been rebuffed. He kissed the Polish Countess Laura Nowalska (Karoline Finaly) on the shoulder at last night’s ball, and was slapped in the face for his pains. Now he is out for revenge. He has a handsome pair of beggar-students, Symon Rymanowicz (Alexander Girardi) and Jan Janicki (Josef Joseffy), released from jail, disguises them as the Count Wybicki and his secretary and lets them loose on the proud but poor Laura. She is soon captivated, and agrees to wed the apparently rich and powerful nobleman. Symon, too, has fallen genuinely in love and wants to expose the trickery rather than wed under false pretences, but Jan, who is an important official in the exiled Polish court’s designs, begs him not to undo their incognitos until he has had time to bring his plots to fruition. Eventually, Laura goes to the altar unknowing, and Ollendorf has his revenge when he looses the inmates of the prison at the couple’s wedding as the bridegroom’s friends. Symon, however, has another rôle to play. Ollendorf, now aware that the rebel Poles are hiding the King’s son somewhere, has bribed Jan to deliver him up. Jan encourages Symon to pretend to be the royal fugitive, and Symon’s impersonation holds up events long enough for the rebels to storm Ollendorf’s fortress and win the day. Symon and Laura are reunited, whilst Jan finds happiness with Laura’s soubrette sister, Bronislawa (Frln Jona).

The hit of the score, unusually, turned out to be neither in the soprano nor the tenor numbers, nor in the soubrette’s supply of lively moments. It came from the rôle of Ollendorf, lugubriously describing to an unforgettable waltz melody the story of the fateful kiss (`Ach ich hab’ sie ja nur auf die Schulter geküsst’). There were plenty of other outstanding moments for the other lead players, however — Symon’s light tenor praise of Polish women (`Ich knüpfte manche zarte Bande’) and his patriotic `Ich hab’ kein Geld, bin vogelfrei’, the jolly masquerade of the two men (`Das ist der Fürst Wybicki mit seinem Sekretär’) and two superb trios for Laura, Bronislawa and their mother, the exuberantly and indomitably aristocratic Countess Palmatica (Therese Schäfer, in one of the best older character rôles of the repertoire), out shopping (`Einkäufe machen’) or gluttonously preparing for the wedding (`Einen Mann hat sie gefunden’). 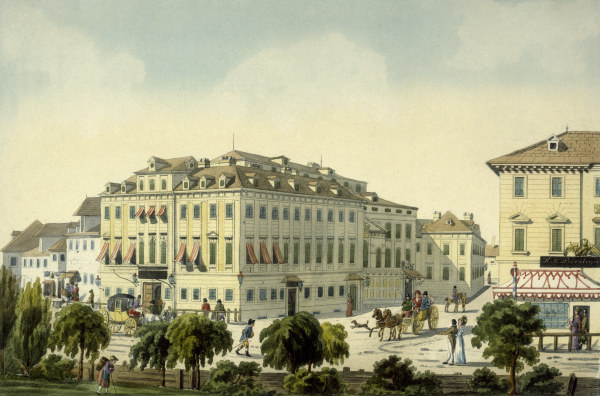 The historic Theater an der Wien.

Der Bettelstudent was produced by Franz Steiner at the Theater an der Wien and proved an immense success. By the time the 100th performance was passed on 3 September 1883, the company had visited the Carltheater to play their hit show, and the Theater an der Wien had hosted a performance by the Hungarian company from the Népszinház of their version of A koldusdiák. The 150th performance (5 September 1884) boasted a `new overture’ and by 1887 Siegmund Stelzer had taken possession of the rôle of Ollendorf alongside Ottilie Collin (Laura), Therese Biedermann (Bronislawa), Carl Streitmann (a rather more heroic Symon than the original) and Joseffy, as the piece continued as a fixed part of the theatre’s repertoire through its 200th (March 1895) performance.

In Berlin, the Friedrich-Wilhelmstädtisches Theater’s production proved a sensation, racing past its 200th performance in seven months (13 August 1883) and in Hungary (ad Lajos Evva, Béla J Fái) the reception won by A koldusdiák was equally as violent. The Népszinház’s number one star, Lujza Blaha, was a travesti Symon with Aranka Hegyi as her Laura, János Kápolnai and Ilka Pálmay were the second pair, and Elek Solymossy (Ollendorf) and Anna Jenei (Palmatica) completed a star line-up with the biggest names Hungary had to offer. The production was played 93 times in repertoire, putting itself into the top ten musical pieces up to then played in the history of Budapest’s most important musical theatre. 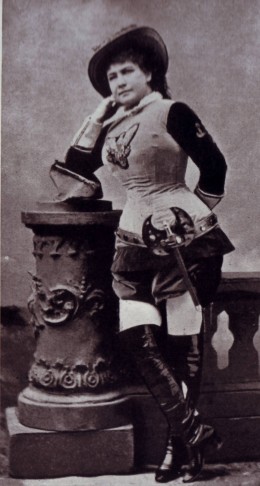 America heard its first Bettelstudent in German, but also with its star tenor rôle played in travesty. That star was one no less important than Hungary’s, Marie Geistinger herself, playing alongside the Ollendorf of Carl Adolf Friese and the Laura of Emma Seebold. Ten days later, the first English version (ad Emil Schwab) opened in direct competition. W T Carleton was a male Symon to the Laura of Bertha Ricci and the Ollendorf of the English comic Fred Leslie, with ex-German soubrette Mathilde Cottrelly as Bronislawa and Rose Leighton as Palmatica. The competition did no harm, for the English version racked up 110 performances whilst the original-language one popped in and out of the German houses’ repertoires. The Beggar Student returned later in the year (6 October 1884) with Mark Smith (Symon), Digby Bell (Ollendorf), Lilly Post (Laura) and Cottrelly for a second season and it came back to Broadway again in 1913 (Casino Theater 22 March) in a Shubert-Brady production with De Wolf Hopper playing Ollendorf, and yet again in 1930 (Heckscher Theater 17 November). A new version by James Stuart was mounted at the Ohio Light Opera in 1996, and the piece still gets occasional mountings in the English language.

London’s The Beggar Student (ad W Beatty-Kingston) was mounted on the splendid stage of the Alhambra with a grand military ballet by Jacobi and a pastorale by Boccherini added to up the spectacle quotient but also with not the very best London cast. Fannie Leslie was a principal-boy style Symon, Savoy star Marion Hood was Laura, a capable comic in the person of Fred Mervin played Ollendorf, and Violet Melnotte, soon to be celebrated as a producer, took the small but featured rôle of Ensign von Richthofen. Fred Leslie took over his Broadway rôle during the show’s run. In 1884 the piece was given in the repertoire of the Carl Rosa Opera Company, with Ben Davies and Georgina Burns starred, and in 1886 it turned up back in London again for a nine weeks’ season at the Comedy Theatre (13 December). This time Henry Bracy was a more suitable Symon with Mervin repeating his Ollendorf and Ada Lincoln as Laura. The Beggar Student was seen in London again in 1895 (Royalty Theatre 12 January), played by a German company with Emil Katzorke as Ollendorf and it most recently reappeared in 1990 played by the semi-professional John Lewis group.

Although Brussels soon had the show on its stages (ad Albin Valabrègue, Alfred Hennequin), and that French-language version was allegedly given soon after at Lille, Paris , which had not welcomed much Viennese musical theatre with any enthusiasm, did not deign to a production until 1889 (ad E Hermil [ie Ange Milher], A J Numès) when Bartel as the burlesquily renamed Puffendorff, Gellio (Simon), Marcellin (Jan), Clara Lardinois (Laure) and Mdlle Duroche (La Comtesse) featured in an undercast production at the little Menus-Plaisirs. Paris, happy in the wisdom that it was producing much of the best musical theatre the world had to offer at the time, sniffed at Millöcker’s work as a pot-pourri of dance music and closed the show in 22 performances.

In Central Europe, after the first very fine flush, Der Bettelstudent held its place at the forefront of the repertoire and when the Theater an der Wien finally let the show loose from its repertoire after some 13 years, it soon began to appear in other Viennese houses.

It was played at the Raimundtheater (8 May 1901) where it was reprised by Karczag in 1908 with Franz Glawatsch as Ollendorf, Marthe Winternitz-Dorda (Laura) and the evergreen Streitmann (Symon) featured, again in 1916, in 1920 and in 1938 (ad Carl Hagemann) with Mizzi Günther as Palmatica, Fritz Imhoff (Ollendorf) and Hans Heinz Bollmann as Symon. It was introduced to the Jantschtheater in 1902 (17 October), the Johann Strauss-Theater in 1911, the Bürgertheater in 1917, and the Kaiser-Jubiläums Stadttheater (Volksoper) in 1909.

If there were one libretto of the Viennese Operette stage which ought — a travesty or so apart — to have remained safe from the `improvers’ of later ages, it would have seemed to be Der Bettelstudent. However, the lure for a publisher of a renewed copyright, the lure for a re-writer of royalties on the back of an out-of-copyright work, inevitably prove too much in Central Europe and, in consequence, in 1949 Herr Eugen Otto had a go at putting an old-fashioned Operette cliche or two into Der Bettelstudent‘s text. In his tidily conventionalized version, amongst other alterations, Jan Janicki turns out to be — wait for it — the very Duke Adam Casimir that he has asked Symon to impersonate. Like so many similarly unfortunate (and similarly `re-copyrighted’) remakes, it is this truly feeble one that holds the stage to this day in such venues as the Vienna Volksoper, who last remounted the work in 1983.

The original production of Der Bettelstudent was successful enough to provoke a number of spinoffs. On 25 March 1884 a humorous prologue to the piece, written by Wilhelm Henzen, illustrating the incident of the famous Der Kuss auf die Schulter, was mounted in Leipzig, whilst at Lübeck Franz Odemar’s Der Komponists Traum (6 December) also used Der Bettelstudent as its subject matter.

Der Bettelstudent made its way to the (silent) screen for the first time in 1922, and further versions came in 1927 starring a still silent Harry Liedtke, and in 1931 with the very un-silent Hans Heinz Bollmann, Jarmila Novotna and Hans Jaray.

In 1936 Georg Jacoby put out a version featuring Johannes Heesters, Marika Rökk and Fritz Kampers and the highlights of Millöcker’s score complemented by two pastiches of his music done by Alois Melichar set to words by Franz Baumann. When it was re-released, the music of this version was credited to Peter Kreuder.

Another film, dating from 1956, credited its text to Fritz Bottger and its musical reorganization to Bruno Uher. Gerhard Riedmann (Symon), Waltraut Haas (Laura) and Gustav Knuth (Ollendorf) featured and the Kessler twins somehow got into the film, if not the plot, as a pair of wandering dancers. An English-language film was broughtout in 1932 with Lance Fairfax and Shirley Dale featured alongside comics Jerry Verno and Mark Daly, Frederick Lloyd and Jill Hands, and a 1957 East German Mazurka der Liebe also credited Zell and Genée’s text as its source. The most recent Bettelstudent to come to the screen did so in Hungary in 1977. Local operetta star Marika Németh played Palmatica.

Several other musical pieces had been produced under the title Der Bettelstudent prior to this Operette, notably a 1781 Munich comic opera by Winter, and another by Buchweiser, mounted for the first time in 1793.