The excellent (and beautifully illustrated) programme calls Der Bettelstudent “one of the best-loved of all the Golden Age Viennese operettas.” This is certainly true, but it is seems to be rarely staged by provincial German theatres today. This could be because it has fifteen important roles, all of which have to be more than adequately cast. Luckily, this was the case with this season’s operetta production at Theater Pforzheim; in fact I am going to find it very difficult not to overuse the adjective ‘superb,’ as this was one of the best traditional productions I have seen for a long time.

The director, Wolfgang Lachnitt, can be credited with much of this success. Firstly, he decided to use the original Zell/Genée libretto, rather than rewriting it (as happened last season with Eine Nacht in Venedig). The dialogue proved to be very witty, especially as rendered by the highly talented cast. It had been subtly and imaginatively directed with an eye for comedy, but also pulling back the pace when pathos was required. All roles were fully developed and believable – even the more comic ones! When one comes across someone who understands how to direct operetta in order to make it relevant and enjoyable to a 21st century audience, it gives one new hope for the genre. At least it gives me hope.

I hope that the pictures which accompany  this review will give an indication of the success of the set design by Jörg Brombacher: simple, yet so effective, using large portraits which slid or flew in/out so that the acting area was always appropriate for what was going one: intimate for a small dialogue scene – whole stage for ensemble numbers. This designer, like the director, clearly understood what was required. There was always something interesting to look at, even if it was ‘only’ the silhouette backdrop of Krakow. 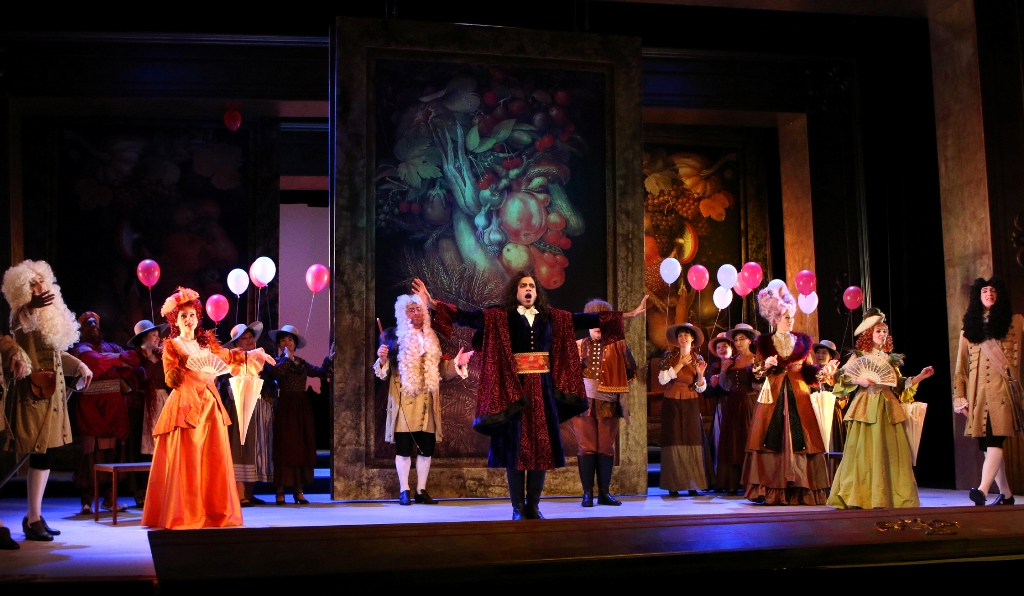 Likewise the costumes (Christian Albert) which were suitably lavish and inventive with some hilariously funny wigs. In no way did this resemble a ‘provincial’ production!

As I have already indicated, all casting was from a position of strength, everyone looking the right age and being able to convince in role as well as sing stylishly.

This applies especially to Dorothee Boehnisch as the countess, and her daughters Stamatia Gerothanasi and Natasha Salles, all of whom gave very amusing portrayals.

Count Ollendorf was a suitably imposing Thomas Möwes, even if he looked a little young! And the officers under his command (Lothar Helm, Aleksandar Stefanoski, Paul Jadach and Danielle Rohr: a breeches role) succeeded in differentiating their characters, even if they were always together on stage.

The two students, Jan (Philipp Werner) and Symon (Dennis Marr: superb high notes) were given the sort of costumes that helped them look dashing when required, and both were easily the equal of Douglas Fairbanks in swashbuckling mode.

Finally, a few words about the secondary role of Onuphrie, the countess’ servant (in American parlance: ‘a morgue worker’). This was played with great humour by Brian Garner, who, although having little to do on paper, in practice ‘stole the show’ whenever he was onstage. Perfect!

The chorus seemed on the small side, even with the use of the extra chorus, but was used expertly by the director, so that each was an individual. There was no dance company as such, but the director cleverly staged the musical numbers with simple but effective choreography that all were able to achieve.

As always at Pforzheim, the orchestra, under the direction of Philipp Haag, impressed, playing very stylishly as if they had been playing Viennese waltzes and nothing else all their lives.

Yes, this was a superb production in every way, and Theater Pforzheim has every reason to be proud of its success. The theatre was full and it was clear that the audience’s appreciation was as great as mine.

Next season, the operetta is Der Zigeunerbaron.

There have been several recordings of Der Bettelstudent over the years, the most recent being the 2013 Mörbisch recording on Oehms Classics, but my favourite, of excerpts only, is of course the 1930 one with Richard Tauber and Vera Schwarz.