The Theater Basel has presented us with a brand new production of Paul Abraham’s 1931 Die Blume von Hawaii. Recently, the original score was reconstructed by Henning Hagedorn and Matthias Grimminger, to allow us to experience once again the distinct ‘Weimar Republic’ sound. The opera house in Dortmund were the first to perform the show in this reconstructed version. Basel opted for a different approach: instead of letting the opera department handle the show, they decided to give it to the drama department, i.e. actors instead of opera singers perform all roles. The large Abraham orchestra is reduced to a smaller band, playing a slimmed down arrangement on the basis of H&G. Frank Hilbrich is the stage director whom you might remember from his Vetter aus Dingsda in Bremen. (With a similar stage arrangement, including an on stage orchestra.)

One of our Swiss colleagues, researcher Thomas Krebs, went to the premiere with high expectations. What he saw, however, infuriated him so much that he sent the Operetta Research Center a candid email, voicing his frustration. It’s not an official review, but it touches upon many aspects that we find worth discussing. Which is why we have decided to post Mr. Krebs’ email, with his consent. And to avoid any confusion: he bought his own ticket, so did not attend as an official critic on a press ticket. We include press photos supplied by the Theater Basel to give you a visual idea of the evening. 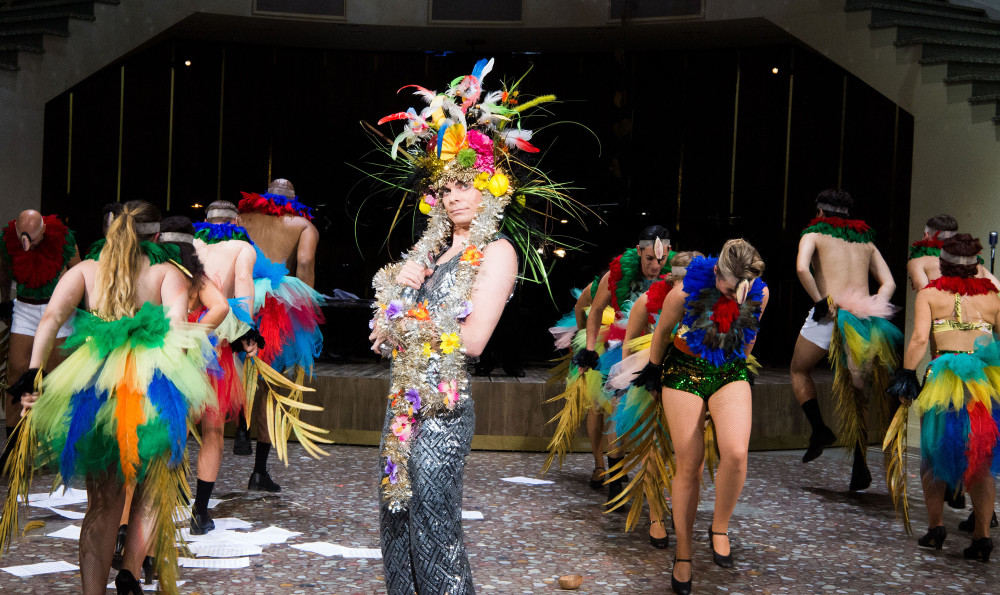 So I went to Basel after all to see the new Blume von Hawaii production last week-end. Because of throat problems of various performers, the original opening night had to be moved from Thursday to Sunday. But I actually only saw half of the performance, because I left during the interval.

I had expected something cheeky, sparkling, light hearted, something with verve that’s unafraid of kitsch elements. Maybe even something slightly edgy. (The one doesn’t have to exclude the other.) Instead, what I saw was to me mostly crude and silly, in a rather laboured way. On top of everything else, although I enjoyed the inspired playing of Henneberger and the Ensemble Phoenix, when it came to the treatment of the songs the whole thing was strangely stale, musically speaking. The sets and costumes didn’t do anything to redress the balance… Dreadful! 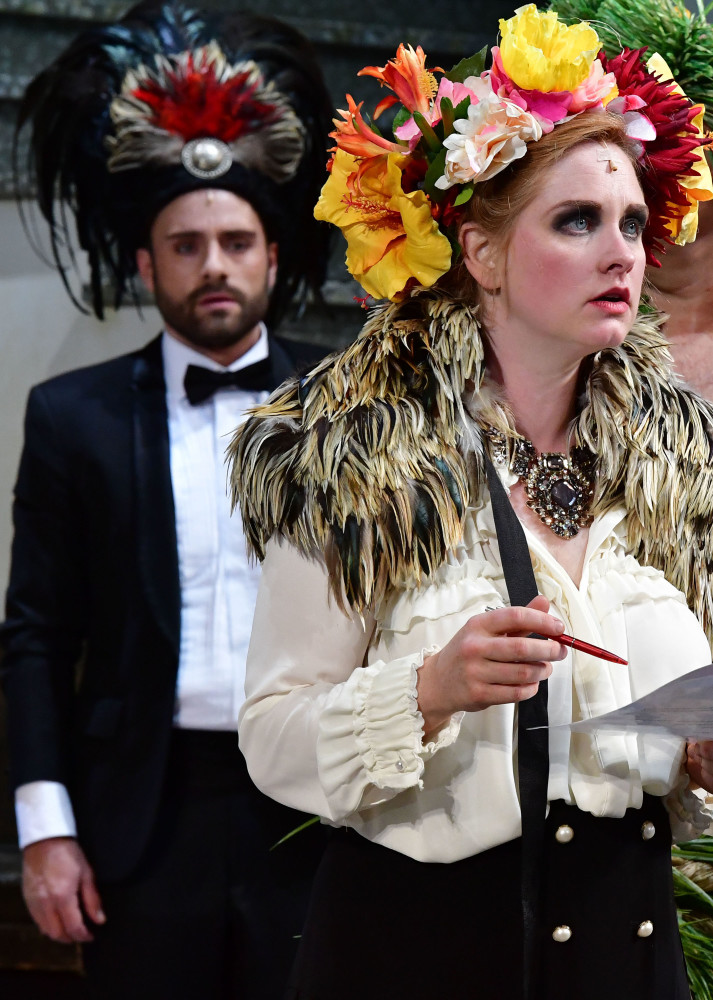 If any of this was intended to be ironic, I just didn’t get it. There certainly was not much entertainment value. And what’s Abraham without entertainment? I had the feeling that this operetta was being dumbed down in a rather disrespectful way. Making the show a tad boring and leaving this spectator quite cold.

The only thing I really liked was the decision to use actors rather than opera people. Their way of singing Abraham – when the stage gimmicks didn’t get in the way too much – made the first part before the interval quite bearable. 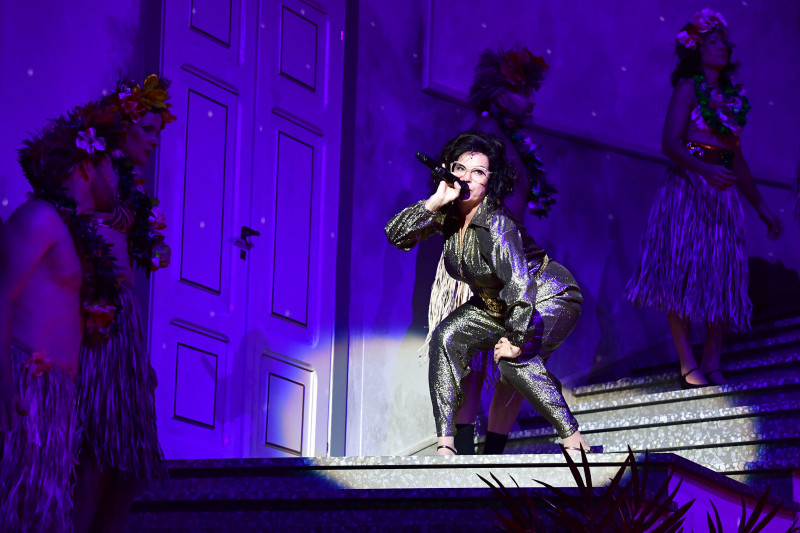 One week earlier, there had been a matinée preview with some of the people involved in the production. Frankly, I was surprised by how unprofessional some of this was with respect to the information given. The director of the acting department of Basel , Almut Wagner, who is also the dramaturg for Blume von Hawaii, did not mention once that Abraham was forced into exile because he was Jewish. She also claimed that he died in 1956. When she referred to Viktoria und ihr Husar she spoke of “Veronika und der Husar” (twice) until stage director Frank Hilbrich and conductor Jürg Henneberger corrected her. 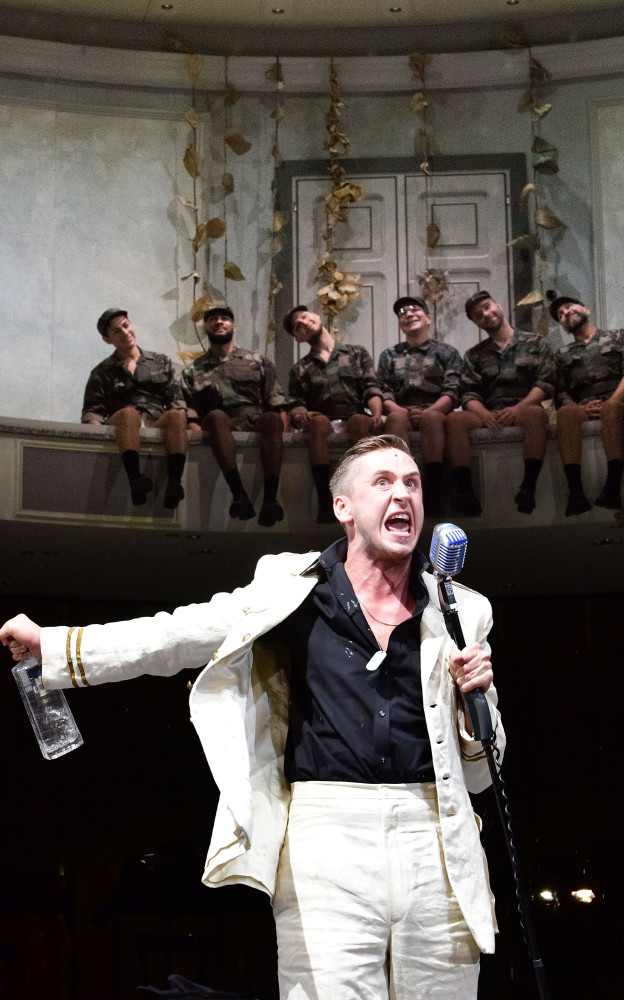 What the show’s director Frank Hilbrich had to say was actually quite interesting, but I wondered why, when he mentioned that Abraham represents the final blossoming of operetta in the early 1930s, together with composers such as Kalman and Stolz, he referred to the latter as “the young [sic] Robert Stolz” [who was twelve years Abraham’s senior…].

To tell the truth, I had been looking forward to a good Abraham production, not stuffy and old-fashioned, but young and energetic, one I did not have to travel all the way to Berlin for. As I did two years ago for Ball im Savoy at the Komische Oper. That was so good, I went twice in a row.

Instead, the Basel production seemed to me infantile without ever being really funny. But maybe the rest of the Basel audience sees this differently?

At least the reviewer from TagesWoche speaks of the “great joy” this production gave him, and he calls Henneberger’s conducting “refreshing,” even thought some of the songs are “Schnulzen,” according to Dominique Spirgi. To read his review, click here. Alexander Dick from the Badische Zeitung also wrote a mostly positive review (“Aloha – o weh?”). His verdict: “[Frank] Hilbrich works – as is typical in drama – with many pauses and experimental dialogue. But the piece needs tempo, otherwise it dies immediately. The production also shows that it’s not easy to turn a large scale revue operetta into a chamber piece. Simply because it’s missing the proper substance for that. Still, the evening managed to fullfill its goal of presenting a contemporary Blume von Hawaii. Why? Because the clichés and prejudices are still the same [as in 1931]. One phrase of a ‘young Hawaiian’ girl called Raka is turned into the cheeky leitmotiv of the evening: ‘This here has absolutely nothing to do with Hawaii.’” (To read the full review in German, click here.)

For more information and performance dates, click here. If you visit the theater’s homepage you can see a video in which the actors talk about the production; it gives you some idea of the “infantile” humor Thomas Krebs refers to.