Yes, the magic carpet does really fly! Just how those Disney wizards manage it without visible wires, we’ll never know. The rest of Aladdin, Disney’s live-on-stage adaptation of its animated cartoon musical of 1992, is fast-paced family entertainment. Is there anyone left on earth who doesn’t know the story of poor, scruffy street urchin Aladdin who falls in love at first sight with the unattainable Princess Jasmine? Can there be any doubt where this story is going? Is there anyone who didn’t see the Disney film which grossed more than $500 million worldwide? 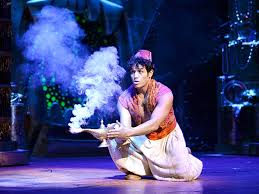 When you rub too hard…. you get this. A scene from the Broadway version of “Aladdin”, 2014.

The challenge Disney, bookwriter Chad Beguelin, composer Alan Menken, director/choreographer Casey Nicholaw face is how to match audience expectations for a story we all know, yet offer some unexpected surprises.

The undisputed star of the original film was Robin Williams’ irrepressible genie. James Monroe Iglehart substitutes Williams’ mischief with his own insistent cheerfulness, a larger-than-life over-caffeinated physical presence, and an endless barrage of jokes and schtick. His self-aware quips detract from the charm of the story, such as “Even our poor people look faaaabulous!”

When this genie finds a miniature Statue of Liberty in his pocket, he confesses to “a little pre-show shopping.” Inglehart is so confident of his own appeal that he becomes tiresome, although many in the audience adored him unequivocally. The boy-hero Aladdin (Adam Jacobs) is a determined, talented, hard-working lad whose integrity, charisma and warmth propel the story forward. Courtney Reed’s Jasmine typifies all those Disney heroines, with the requisite girlish independence, spunk and sweetness, even if her belly-dancer costume is somewhat cheesy for middle-eastern aristocracy. Rounding out the principals is Jonathan Freeman’s Jafar, reprising the role he created on-screen; he does best of all with the snarly evil gags and wicked plots he’s been given.

The greatest joys to be found in Aladdin are its much beloved songs, ‘A Whole New World,’ ‘Friend Like Me,’ and ‘Prince Ali.’ But the opener ‘Arabian Nights’ swamps the stage with excess rather than seduces the audience with middle eastern exoticism. Aladdin’s character-defining ‘One Jump Ahead’ is a dizzying dash from one moving set piece to another. ‘Proud of Your Boy,’ a Howard Ashman song cut from the film, establishes Aladdin’s integrity and strength of character. But the new songs, ‘Diamond in the Rough’ (for Jafar, Iago and Aladdin), ‘A Million Miles Away’ (first romance for Aladdin and Jasmine) and ‘Somebody’s Got Your Back’ (comic relief from the Genie Aladdin and his three sidekicks) are adequate if seldom equal to those songs you know. The showstopper ‘Friend Like Me’ substitues busy spectacle for imagination, but few in the audience notice the difference. And ‘A Whole New World’ is upstaged by the flying carpet, when the audience wonders “how did they do that” rather than listen to the lyrics. 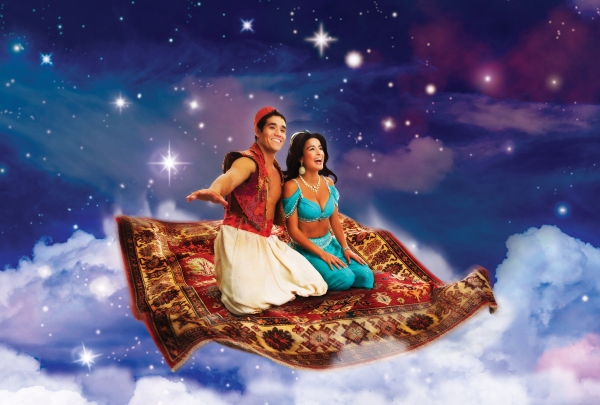 The flying carpet scene from the stage version of “Aladdin”, 2014.

Let us note changes necessary in the switch from screen to stage. Animated cartoon animals have necessarily morphed into human equivalents. Abu, Aladdin’s companion monkey in the film, has been re-invented as a trio of teenage slackers, Omar (Jonathan Schwartz), Bakak (Brian Gonzales) and Kassim (Brandon O’Neill). These idiots are saddled with obvious slapstick humor from kiddie Saturday morning television. Example: One says, “I feel awful.” Another replies, “Falafel? Did somebody say falafel?” Or “It’s not right to bully.” Reply, “Did someone say tabouleh?” In lieu of evil Jafar’s sidekick parrot, stage counterpart Iago is the pint-sized Don Darryl Rivera, whose idea of fun is to mimick or repeat his master’s every word. This recurring gag, a literal parrot, plays to diminishing comic returns.

I wish I could say that I liked Aladdin more. It’s a perfectly anonymous, paint-by-numbers musical comedy that tries so very hard to be likable. It is very big, very noisy, very silly and hardly if ever surprising or genuinely imaginative. It’s like a cardboard Kismet without that show’s great music, but with $15 million worth of Las Vegas ‘bling’ to blind the audience.

While every Broadway show offers souvenir merchandise, I expected the genie to hawk magic carpet beach towels, Aladdin and Jasmine dolls, tassel key chains, even a magic lamp for $24.95. Given the resources of Disney, it is doubly disappointing to see Aladdin settle for the familiar and formulaic, when they could have reached for the wit and imagination of The Lion King. When the creative team wish to expand a musical number, must we be content with the same chorus people returning 60 seconds later in new and flashy costumes, and then again, and then again? It is exhausting but seldom memorable, except for the magic carpet which is the real thing.