The industrial town of Pforzheim boasts a population of under 121,000, yet has an intimate 507 seat modern theatre which presents plays, musical theater and dance which deservedly attract full houses. At least that was the case for the most enjoyable performance of Eine Nacht in Vendig on May 2, which I was lucky enough to experience. 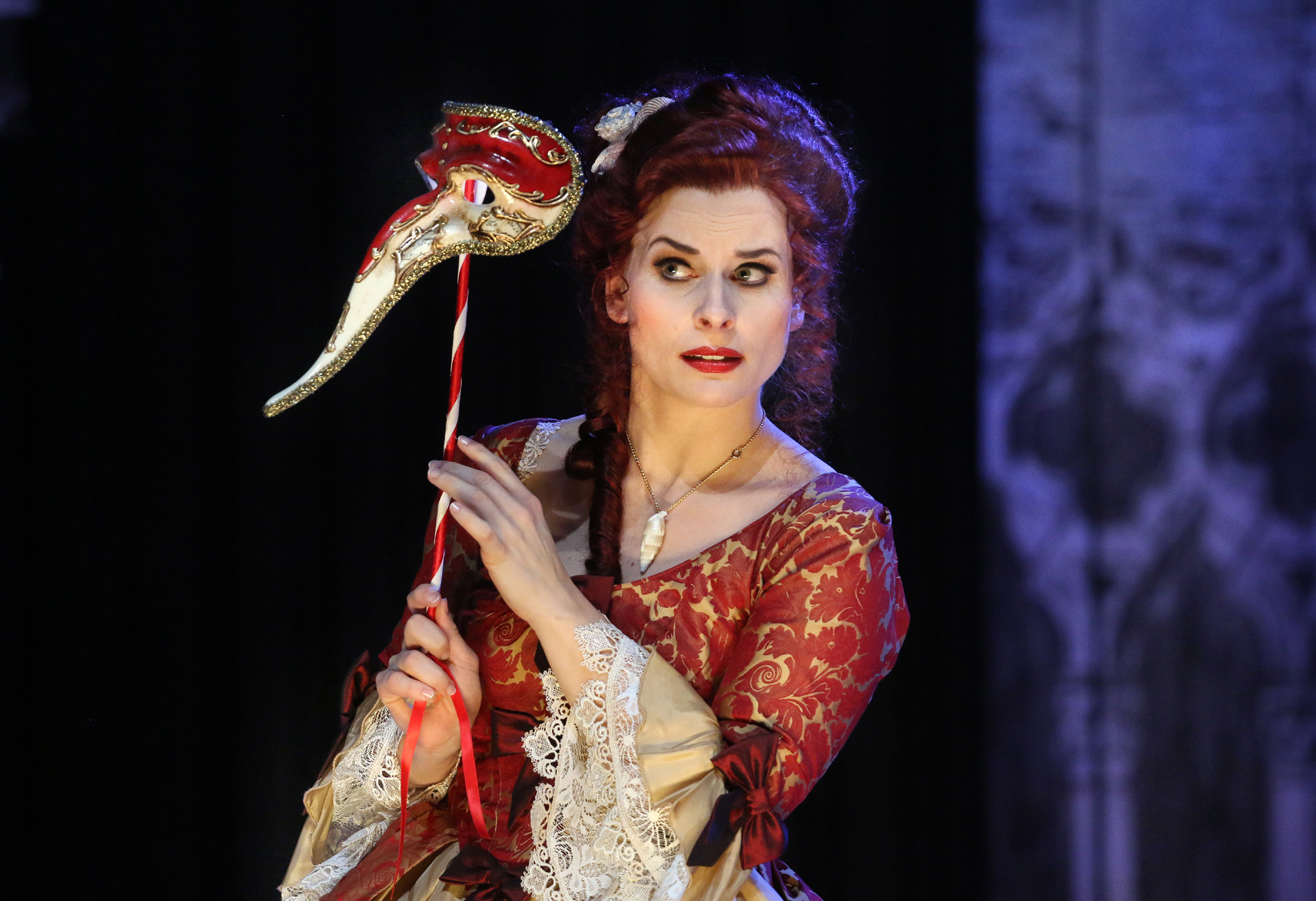 Kurt Gänzl labels the Berlin world-premiere (3 October 1883) of this operetta a ‘failure’, and in fact even when the libretto was heavily revised for its subsequent Vienna premiere (9 October 1883) it never really caught the public’s imagination, yet still remains one of the most well-known Strauss operetta titles of them all. Strangely enough, the show’s longest run by far was in London in the 1940s where it achieved 433 performances. Erik Korngold and Anton Paulik re-orchestrated the show at different times, adding and subtracting music. In 1976, English National Opera staged a version in which the book had been rewritten by Murray Dickie, the director. 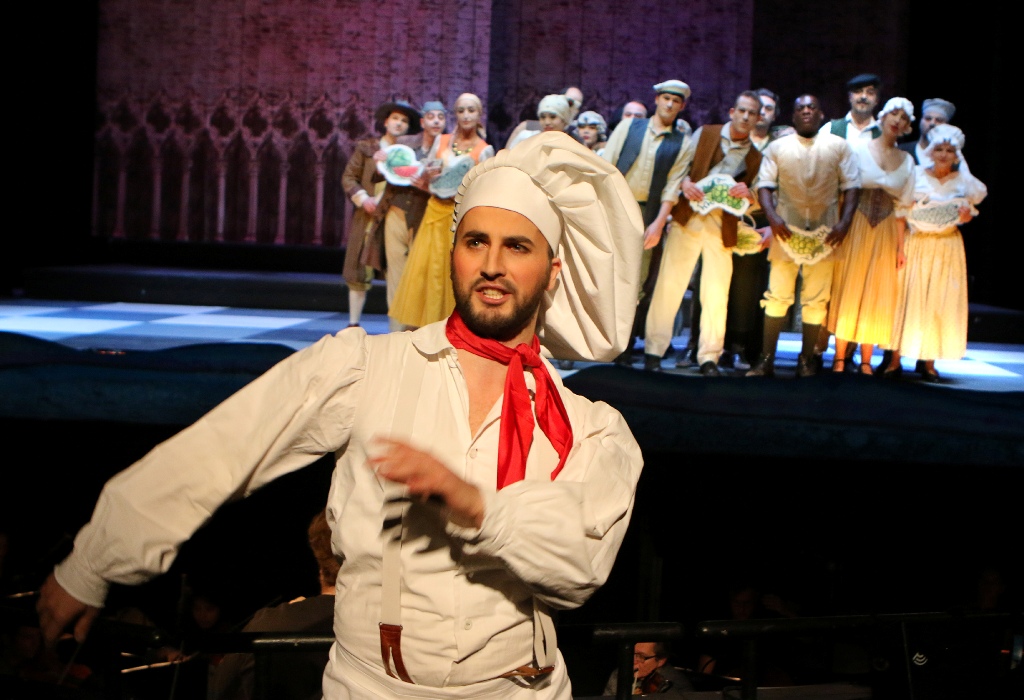 Musically, Pforzheim’s production, using the 1883 Vienna score, was very successful. As with Blume von Hawaii in 2016, conductor Mino Marani succeeded in securing very stylish playing from the orchestra and the strong ensemble cast could all sing and act, as well as looking the right ages for their respective roles! 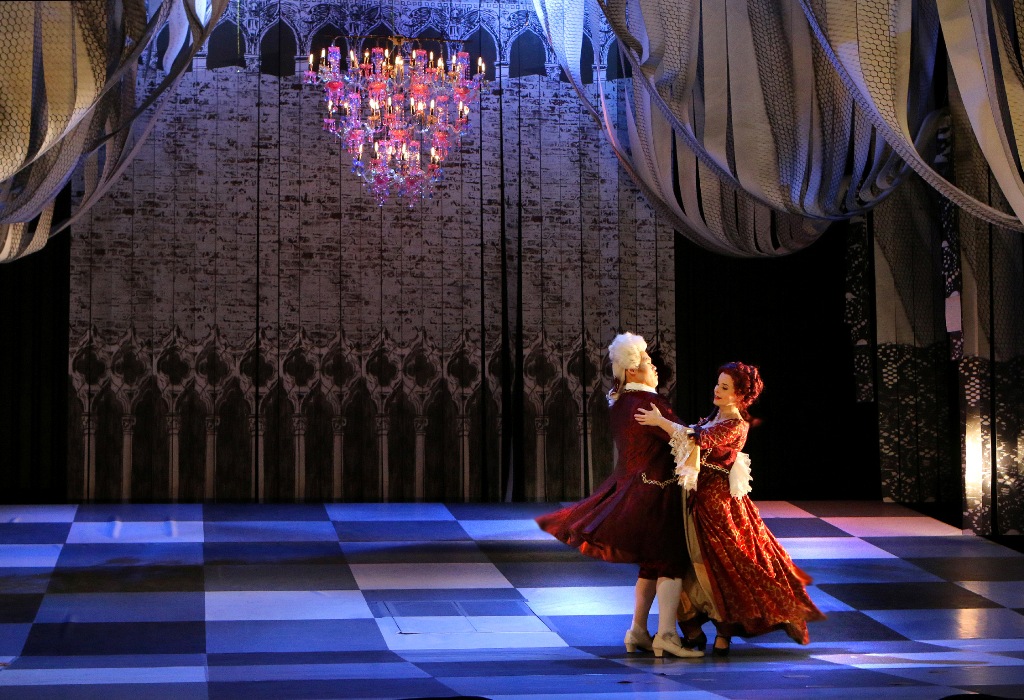 Johann Strauss II and his librettists were particularly successful in creating the role of the barber, Caramello, as was Franziska Tiedtke with Caramello’s side-kick Annina. I was particularly impressed by those cast in secondary roles, such as Brian Garner, the Senator in Black, and by the men’s chorus who had been treated as individuals by the inventive director, Tobias Materna.  All the cast, principals and chorus, gave the operetta tremendous drive and energy throughout. 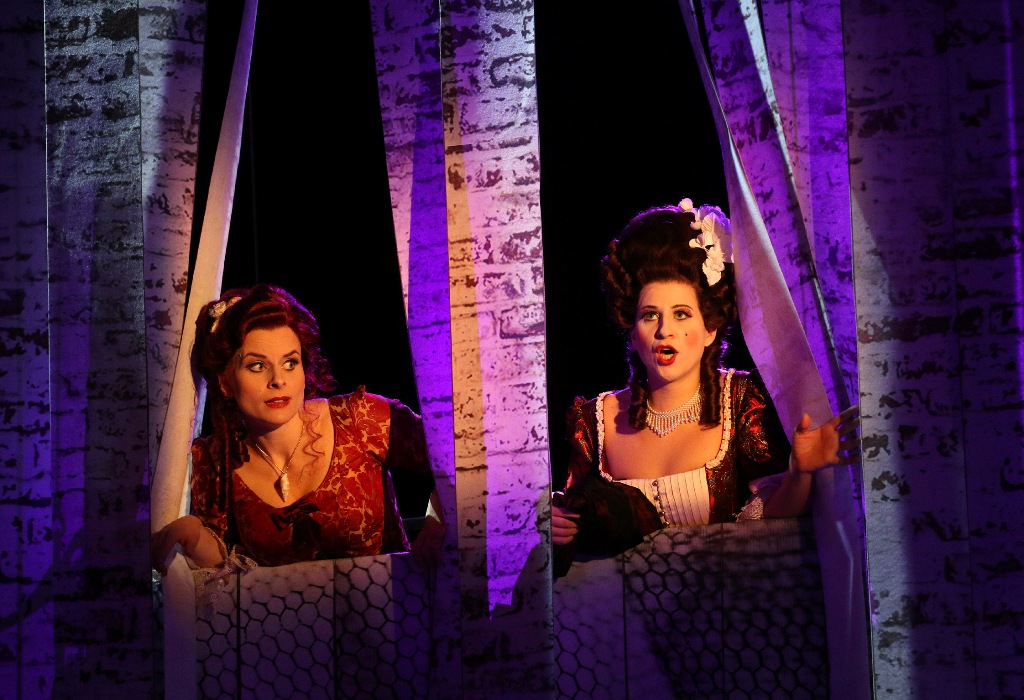 Mythology has it that Strauss did not read the libretto (Zell/Genee) before he set it and that the lack of success of the operetta is due to its dramatic weaknesses, but, as Gänzl has pointed out, the libretto is no better and no worse than most of the others from the same team, and a good deal better than some! 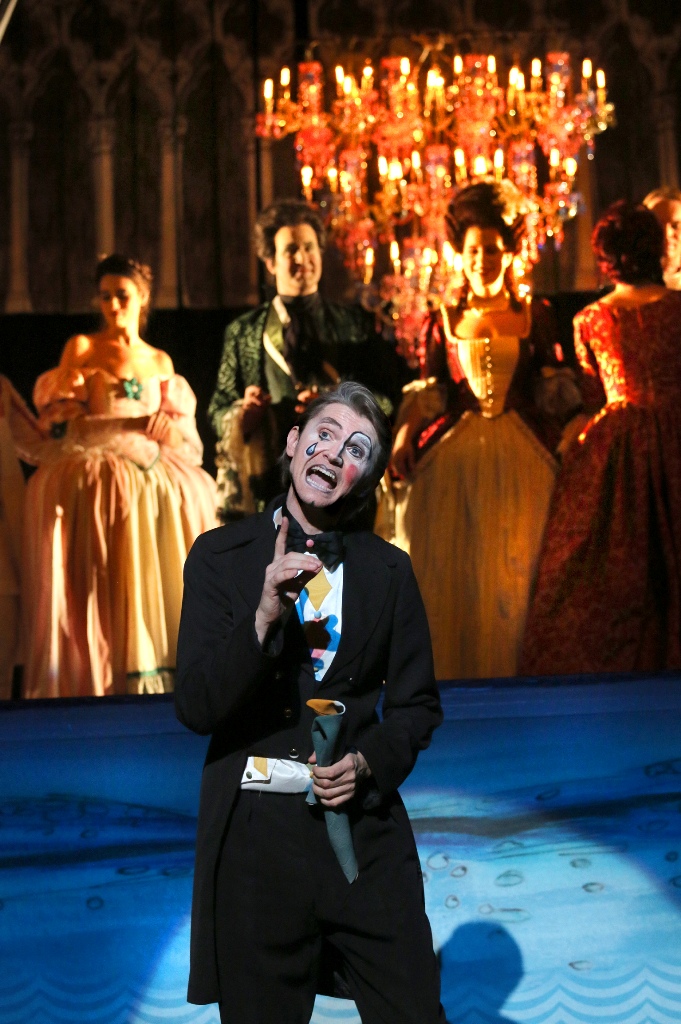 Thomas Peters as the Narrator in “Eine Nacht in Venedig” in Pforzheim. (Photo: Sabine Haymann)

Pforzheim’s solution was to completely rewrite and/or omit the dialogue, instead using a narrator (Thomas Peters) and minimal spoken interaction between the characters. Although at times amusing, this did get rather tedious as there was too much narration, often holding up the action, and some of it was not as amusing as the authors (Tobias Materna, Thomas Peters and Thorsten Klein) clearly thought it should be. It also succeeded in making the ridiculous plot more rather than less difficult to follow! The director also decided that the interval was better placed in the middle of Act Two, rather than after Act One, which adversely affected the structure of the piece. 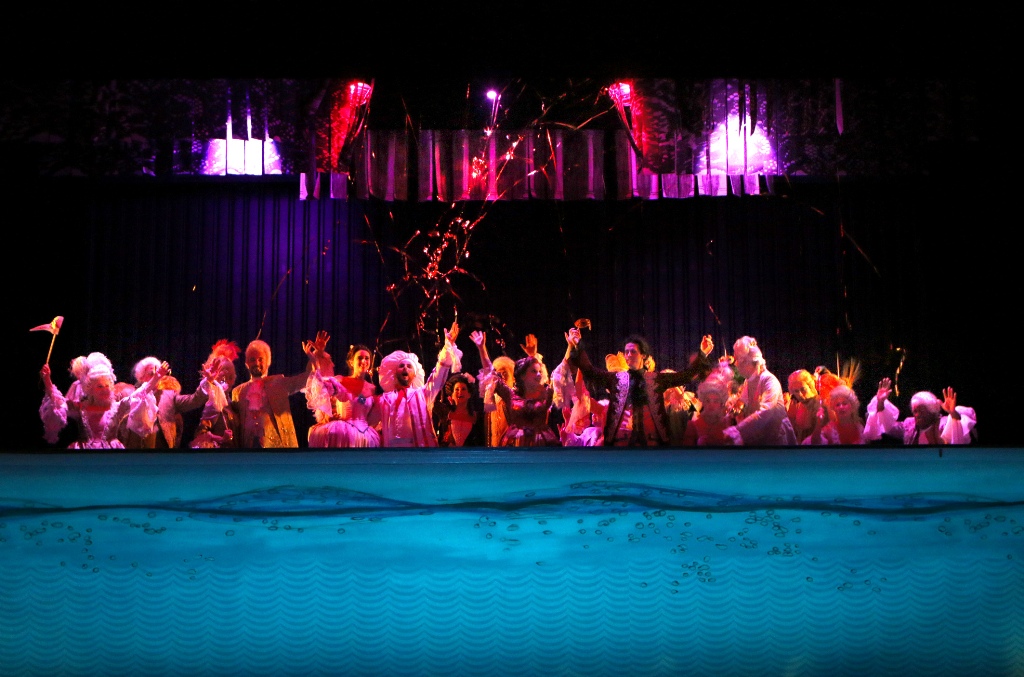 The ensemble of the Theater Pforzheim in “Eine Nacht in Venedig.” (Photo: Sabine Haymann)

I have nothing but praise for the set designer (Martina Staian): clearly on a tight budget, she had decided that simplest was most effective and just used painted cloths to suggest the Doge’s Palace and the moveable stage floor to create visually interesting pictures that the cast found easy to use. 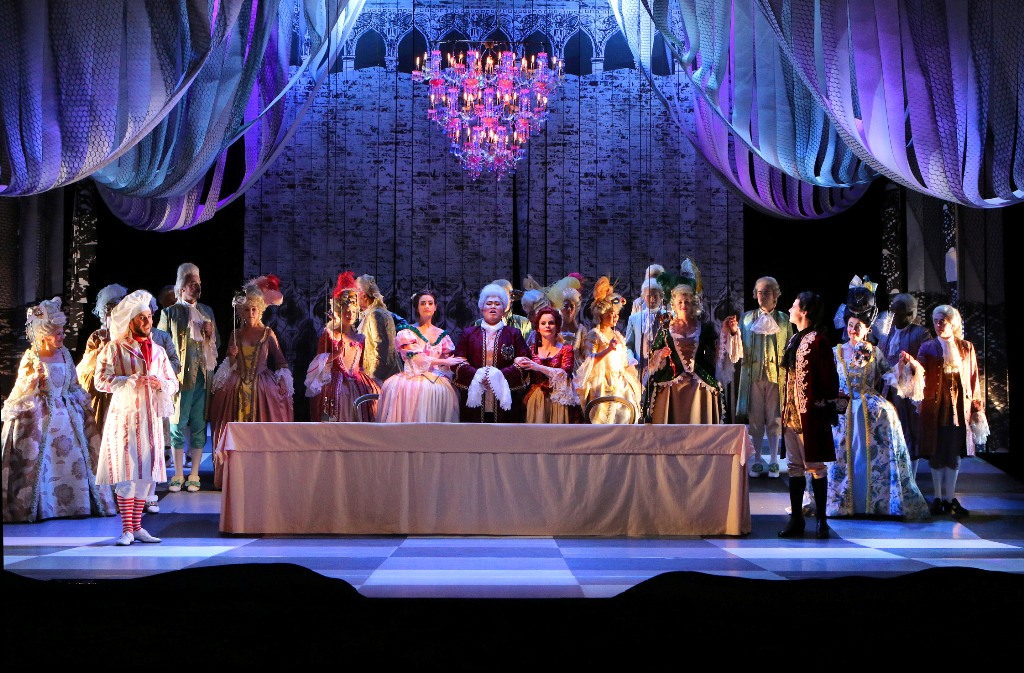 The masked ball in “Eine Nacht in Venedig” in Pforzheim. (Photo: Sabine Haymann)

Costumes (Dirk Steffan Goepfert) were sumptuous, especially at the ball in Act Two: each related well to the role being played and provided  effective splashes of color. In fact musically and visually this show was a real treat, and I look forward to next season’s operetta, Der Bettelstudent, interesting if only because when Zell and Genée were asked by Strauss for a new operetta, they could have offered him Der Bettelstudent instead of Eine Nacht in Venedig, but thought that, as he was the stronger composer, he would make a better job of what they knew was the weaker libretto!