Yes, it’s always a treat to hear Offenbach live, especially those works that are not part of the over-familiar group of eternal favorites. One of the Offenbach titles recently rediscovered on a grander scale is his Opéra Comique Fantasio, started before the French-German War in 1870/71 with a tenor title role, but only premiered later in a different version for mezzo-soprano. Add to this a third Vienna version for soprano. The Komische Oper Berlin offered a chance to hear the reconstructed “original” tenor version of 1869, reconstructed by Jean-Christophe Keck. Who came to Berlin to attend the first of two concert performances. There will be a radio broadcast on March 12 on Deutschlandradio Kultur at 19.05h. 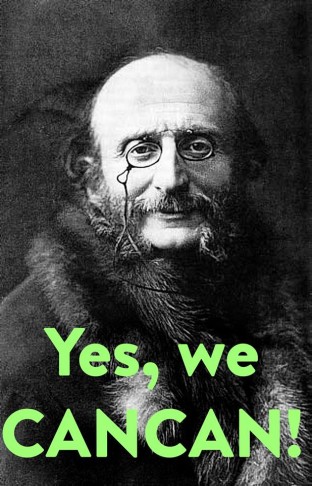 “Yes, we Cancan”: Poster for the Offenbach Festival at the Komische Oper Berlin.

Of course you could ask: why Fantasio? Is it just because Opera Rara released a new recording recently? Is it because Karlsruhe brought the work back to the stage after that? Is it because there is a certain “buzz” surrounding the work right now? Is it because the show is set in Bavaria and offers some rather amusing moments in which a witty stage director can spoof “traditional” South-German culture? Is it because we live in a mad world right now, and a gently mocking Opéra Comique about a fake court-jester seems topical? Whatever the answer is, I personally find Offenbach’s attempts to conquer the family-friendly Opéra Comique nowhere near as interesting and original as his opéras bouffes; and there are many of those that were once notorious and very famous that are now forgotten and would deserve a grand revival – much more than the sweet Fantasio. There’s the hilarious “chastity operetta” Geneviève de Brabant from 1867, which is also being given a new production based on the Edition Keck in Montpellier in March. In content and style, it would have fitted Barrie Kosky’s operetta approach much better; as would have La diva, a kind of autobiographical work about (and written for) Hortense Schneider, with some La Traviata references thrown in to make the demi-monde aspects more interesting.

But instead, we got Fantasio in a full concert version, so the show wasn’t cut down to 1.5 hours, like Kosky’s Christmas Kalman operettas. That’s a great plus! Like the Christmas operettas, this concert performance had a well-known Master of Ceremonies guiding the audience through the French libretto and action: Dominique Horwitz. Unfortunately, there were no subtitles, which made it difficult to follow what was going on in all the arias and ensembles. And if you were a non-German speaking visitor – who couldn’t understand Horwitz’s narration – you were basically lost. Which is a pity, since the lyrics are important to understand what Offenbach is doing musically. Which is a lot!

The line-up of soloists was impressive. For me, the stand-out performance was Adela Zaharia as Princess Elsbeth, daughter of the King of Bavaria (Carsten Sabrowski).

Zaharia was a tall and slender stage presence, and commanded an ideally focused soprano voice that was dazzling to listen to. Maybe it dazzled me so much because I sat right in front of her in row 3. But I assume she sounded equally impressive from elsewhere in the auditorium. Her lovely phrasing in the arias, her absolutely electrifying top notes in the duets and ensembles, kind of left the rest of the cast way behind. This was a superstar performance, and Zaharia was understandably cheered by the audience. Her partner, Tansel Akzeybek as the tenor Fantasio, seemed scared, judging by the look on his face. He offered a sweet and innocent rendition of the student-turned-jester, but lacked stage presence and vocal character to be the center of attention in this performance. The center was Zaharia and, by her side, Zoe Kissa as her page boy. The two together were magnetic. 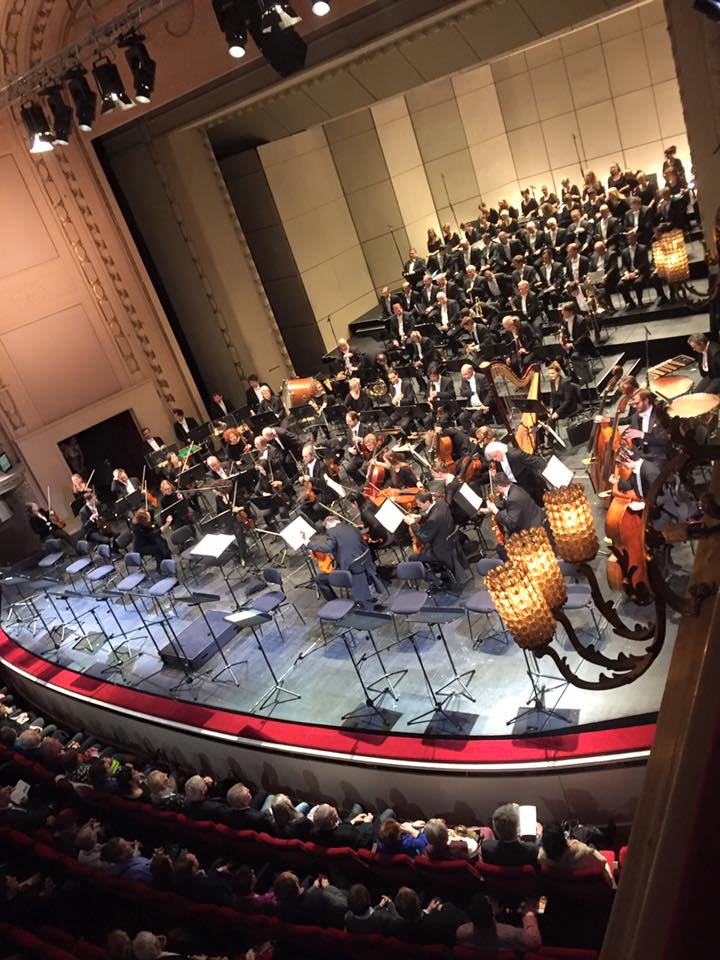 The orchestra and chorus taking their seats for “Fantasio” at the Komische Oper Berlin. (Photo: Private)

The other great pair of the evening was Dominik Köninger as the Prince of Mantua with his side-kick Adrian Strooper as his servant. Their fast-paced duets were a riot, and when Köninger opened up his voice for the more dramatic parts of the score towards the end of act 3, some of his singing was orgiastic. Again, the effect for me was double intense because I sat right in front of him. His baritone had such ring and power that is was arousing to listen to.

The small parts were excellently cast from the house ensemble. Most noteworthy was Bulgarian baritone Nikola Ivanov as Sparck, delivering his various short solos with panache.

(It took me a while to realize that this was the same singer who looked so different in Salon Pitzelberger a few nights before; vocally he was much better suited for Sparck, a young revolutionary, than the father-role in the one-acter.)

Special mention should go to Johannes Dunz in the mini-role of Facio. It really was a vaste to cast him in such a bit-part. Since his voice, focus and style is reminiscent of Adela Zaharia, I wondered for streches of the evening what this Fantasio might have sounded like if Dunz had been cast in the title role. (It would probably have been very impressive.)

In any case, it was a grand evening that the audience seemed to enjoy very much, if the applause at the end (and after many musical numbers) is any indication. Yesterday, Boris Kehrmann gave a pre-performance lecture that was full of novel ideas and interpretations of Offenbach and Fantasio. On Tuesday, Jean-Christophe Keck will deliver a pre-performance talk too, in French and with live translations from Frank Harders, the head of Boosey & Hawkes, i.e. the publisher of the Offenbach Edition Keck. Since Mr. Harders is a great MC himself, this should be a double treat. And I wouldn’t want to miss the chance to hear the Keck/Harders team, nor to hear Fantasio again. Let’s hope the other Offenbach goodies – more in line with the mad-cap operetta approach the Komische Oper is famous for – will follow soon. I overheard, in the interval, how two dramaturgs talked with Desiree Nick about both La diva and Geneviève. She would, indeed, be interesting casting for the demi-monde diva and the naughty “unchaste” Geneviève. So let’s see what happens next – and let’s see when Adela Zaharia returns to Behrenstraße again. I’d like to reserve a front seat for that, right now.