Producer Harvey Weinstein is determined that his new musical about J M Barrie, the playwright who wrote Peter Pan, will deliver family-friendly fun. In order to do just that, he dismissed the first team of bookwriter, composer, lyricist, director and choreographer after its tryout in Leicester, England, three years ago. He hired genius director Diane Paulus (Pippin) instead. British pop songwriters Gary Barlow and Eliot Kennedy (of Take That fame) have written an altogether sunnier, cheerier musical than their predecessors. But Finding Neverland begs the question how much fun can be had from a man suffering writer’s block? 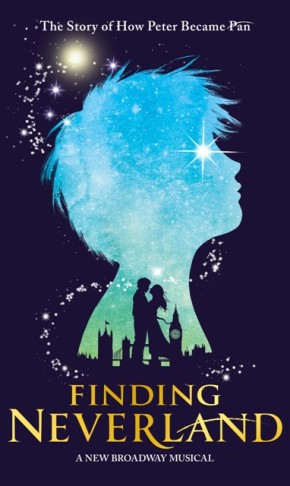 The poster for the 2015 Broadway version of “Finding Neverland.”

When the show begins, playwright J M Barrie (an appealing Matthew Morrison) has just come off another stage failure, and is not certain where his next inspiration will come from (‘If the World Turned Upside Down’). Producer Charles Frohman (Kelsey Grammer) and his troupe of jolly theatricals are no help, nor is there any love or support from his distant wife Mary (Teal Wicks). A chance encounter in St. James’ Park with the four Llewelyn Davies children, George, Peter, Jack and Michael, gives Barrie the unlikely inspiration for what would become Barrie’s greatest masterpiece, Peter Pan. Their mother, the widow Sylvia Llewelyn Davies (Laura Michelle Kelly), is initially cautious and embarrassed, then grateful for Barrie’s interest, which turns increasingly romantic for both by Act 2. What follows is a series of incidents and tableaux which inspire Barrie to write recognizable moments or quotes in Peter Pan. The inevitability of Peter Pan’s success is never in doubt, despite Barrie’s many doubts and Frohman’s protests of its absurdity and foolishness. The widow Davies dies and Barrie vows to look after the boys with the aid of their grandmother. This is a clumsy, old-fashioned and sentimental story for a musical, which is cluttered with too many generic songs, contrived production numbers, and the usual assortment of special effects, silly costumes and gimmicks Broadway audiences have come to expect.

James Graham’s workmanlike book follows the basic outline of its predecessor film, but settles too often for clichés. Matthew Morrison’s J M Barrie is an appealing cipher, but he’s an unwilling protagonist, too often a passive observer of the four boys’ shenanigans. Director Paulus and Morrison have struggled against the text to make him more compelling, but he’s saddled with trying to “man up” in a phony Act 1 finale called ‘Stronger’ in which a stagefull of pirates and ship sails turn up the volume in a vain bid for his transformation. Barlow and Kennedy’s tunes have a familiar toe-tapping cheerfulness which are easy on the ears, like some Beatles’ songs you once knew, but the lyrics are trite and forgettable. The up-tempo songs are more fun than the ordinary, often maudlin ballads (‘Believe,’ ‘All That Matters,’ and ‘What You Mean to Me’) which could fit into dozens of other musicals.

The ensemble numbers for Frohman’s company of actors, Londoners in the park, denizens of a pub or else domestic servants are vacant exercises in the obvious cheer (‘All of London Is Here Tonight,’ ‘The World Is Upside Down,’ ‘Something About This Night’). To the credit of director Paulus, playwright Graham and the young actors, each of the four Llewelyn Davies’ boys emerges as distinctive personalities, especially Peter (Aidan Gemme) who is the most thoughtful and lonely after his father’s death. Barrie and Peter inspire each other, which is the show’s only honest emotion.

All the other relationships are shallow, silly or under-dramatized, whether between Barrie and his wife, the four boys and their grandmother (a wasted Carolee Carmello), or Barrie and his producer Frohman.

Least plausible of all is Barrie’s and Sylvia’s affection for each other which they publicly deny, but express in tedious song. Here is yet another show in which children speak with candor and honesty, while all adults lie, obfuscate or condescend; an entire evening of this becomes tiresome.

Given their assignment to bring this lumpen mish-mash to stage life, director Diane Paulus and choreographer Mia Michaels attack the stage with over-kill. For example, when Barrie implausibly invites the four Llewelyn Davies’ boys to an adult dinner party at his home, the comic mayhem that ensues (‘The Dinner Party,’ ‘We Own the Night’) is pure Marx Brothers farce, extraneous, but why? When Barrie and Sylvia join the Frohman company of actors for a night at the local pub, the song ‘Play’ is yet another generic, “knees-up” jolly song you’ve seen and heard in dozens of British musicals. Worst of all is the tortured ‘Circus of Your Mind,’ a mindless production number meant to evoke Barrie’s psychlogical torment. The audience are asked to believe that after the opening night performance of Peter Pan, its entire cast act return to act out the play for the dying Sylvia Llewelyn Davies in her bedroom. At the end of this false apotheosis, the dying Sylvia flies away from her deathbed with Peter Pan.

It’s a handsome visual trick, but by this time we’ve been manipulated too often and too much to care.

Apart from the four boys who act and sing well, Morrison does his level best to make us care for a man who doesn’t know what he wants to do from moment to moment. Laura Michelle Kelly’s Sylvia does not permit her to do anything she did not do better as Mary Poppins, that is, sing sweetly and look quaint. Kelsey Grammer is mostly tiresome as Frohman, and the only fun we and he have occurs when he plays Peter Pan’s nemesis Captain Hook in the song ‘Live by the Hook.’ Grammer is unable to resist an anachronistic pun/quip about his long-running tv series ‘Cheers.” The gifted Carolee Carmello plays the stern Davies’ grandmother as a dour cliché, only to melt predictably by final curtain. Scott Pask’s clever set morphs gracefully from St. James Park, the Barrie or Davies’ households, Frohman’s theatres, a pub or wherever with seamless skill. The stage is breathlessly cleared for Barrie’s introductory solo “If the World Turned Upside Down,’ the ‘Stronger’ Act 1 finale, or Barrie & Sylvia’s treacly duet ‘We’re All Made of Stars.’ Job well done, and much the same can be said for the handsome period costumes by Suttirat Anne Larlarb.

In conclusion, Finding Neverland is far from painful to sit through, occasionally even a bit of fun, but rather exhausting as its creators and tireless cast demand that you share their endless jollities. I prefer musical theatre to be spontaneous, generous and creative. Finding Neverland is instead overwrought, over-carpentered, and frankly, just not a very good idea for a musical in the first place.