With High School Musical star Vanessa Hudgens the unlikely-on-paper lead, and advance word that Colette’s story about a young girl being trained as a courtesan had been thoroughly sanitized, I feared the latest stage version of Lerner and Loewe’s 1958 multiple Oscar winner would be bowdlerized beyond recognition. And yet, though flawed in a great many respects and with alterations duly acknowledged, the show has much to commend. 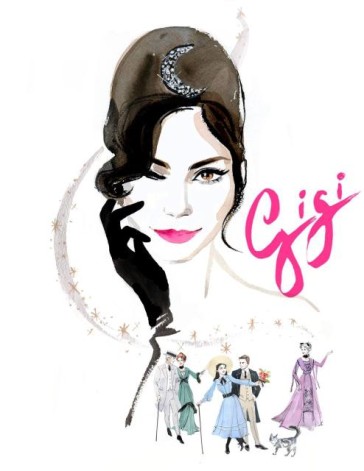 Poster for the 2015 Broadway production of “Gigi.”

It is true that you don’t, for most of the first act, have much inkling that young Gigi is being trained by her grandmother Mamita (Victoria Clark) and Aunt Alicia (Dee Hoty) in anything beyond grooming and good manners in fin de siècle Paris. Gigi seems to be enjoying a relatively wholesome upbringing, with occasional chaste and playful visits from notorious playboy Gaston (Corey Cott), a longtime friend of Mamita, who treats her simply as a fun kid sister.

But once Gigi matures, and Gaston’s interest in her becomes more than fraternal, the pragmatic Aunt Alicia springs into action and insists that a contract be drawn up for Gigi’s material comforts as a kept woman, and for her financial future when inevitably Gaston moves on to another woman. So from this point onwards, the essential story is back on track.

It is a pity that aging man-about-town Honore (the film’s Maurice Chevalier role – not a Colette creation, by the way – here taken by Howard McGillin) has been deprived of “Thank Heaven for Little Girls” in the name of ludicrous political correctness but, in truth, the song works remarkably well in the hands of Clark and Hoty. (Honestly, though, did you ever, for even a moment, mistake Chevalier’s character in the film for a pedophile? Isn’t the lyric “they grow up in the most delightful way”? But I digress. )

Honore’s other big number “I’m Glad I’m Not Young Anymore,” in which he expresses gratitude for the romantic complications of youth now being behind him, is similarly diluted by becoming a duet for him and Clark, but that too works surprisingly well.

All the famous songs from the movie are here, although Gigi’s “Say a Prayer for Me Tonight” (originally written for My Fair Lady) is sung by Mamita, and Clark does it quite magnificently turning it into the vocal highlight of the whole show.

The additional songs penned by Lerner and Loewe for the unsuccessful 1973 Broadway version are utilized, too, though sometimes in new context. Gigi’s “In This Wide, Wide World,” for instance, becomes a duet for Gigi and Gaston near the end of the show. That stage version, incidentally, went on to have a measure of success in the German-speaking countries, but a more intimate mounting in London in 1985 (with Jean-Pierre Aumont as Honore) was no great shakes either. (I recall Alan Jay Lerner anxiously pacing up the side aisle during an early performance there.)

The current production trumps that one, but there is a palpable sense of the source material being dumbed down for modern sensibilities. Are today’s young people not supposed to know that the world described by Colette once existed?

Hudgens acquits herself well, albeit in a strictly All-American way, and I warmed to her in the latter part of the show where her studied perkiness mellows into a more interesting maturity. It’s good to see McGillin in anything, and he’s an ingratiating presence, but also not in the least Continental. Nor is Corey Cott’s Gaston, the most egregious and damaging bit of casting. Gaston must be older than Gigi, or the references to his string of love affairs, sound pretty silly.

He needs to be mature, suave and debonair. And for all Mr. Cott’s youthful likeability, those qualities elude him.

And though he tries hard, his delivery of the title song falls flat where it should soar. (Listen to Daniel Massey’s version from 1973, or Louis Jourdan on the soundtrack, of course, to hear how it should sound.)

By far, the standouts in the show are Victoria Clark, wonderfully warm and real as Mamita, and Dee Hoty, starchy and imperious as Aunt Alicia. There’s real poignancy in the latter scenes of Gigi, Gaston, and Mamita, proving that adapter Heidi Thomas has done her adaptation chores with some sensitivity. And director Eric Schaeffer handles those intimate scenes well.

Joshua Bergasse’s choreography is often overly busy and frenetic. And Kai Harada’s sound design is tinny and shrill, putting the show on more on the knock-em-dead level of Aladdin. Perhaps that was the intent. Similarly, August Eriksmoen’s orchestrations sound like a poor cousin of Irwin Kostel’s for the 1973 version. And apart from the aforementioned “Say a Prayer,” none of the songs are paced to linger in sentimentality.

Derek McLane’s sets – an Eifel Tower/Maxim’s amalgam – are a colorful Art Nouveau eyeful, if a little on the provincial side. Catherine Zuber‘s costumes also please the eye.

The show is still enjoyable, flaws and all, and it’s wonderful to have Lerner and Loewe back on the boards in the same season that gave us the exhilarating Paint Your Wagon revival at Encores. But it should have been so much better.