Showboats gave the theatre-starved people along the Mississippi from the 1880s into the 1920s what they most wanted: melodrama and vaudeville. It was a different world: Groucho Marx remembered the two most reliable laugh-getters in vaudeville being, first, in response to the line “The garbage man is here”, “Tell him I don’t want any”, and to the line “I’d like to say good-bye to your wife”, the response: “Who wouldn’t?” 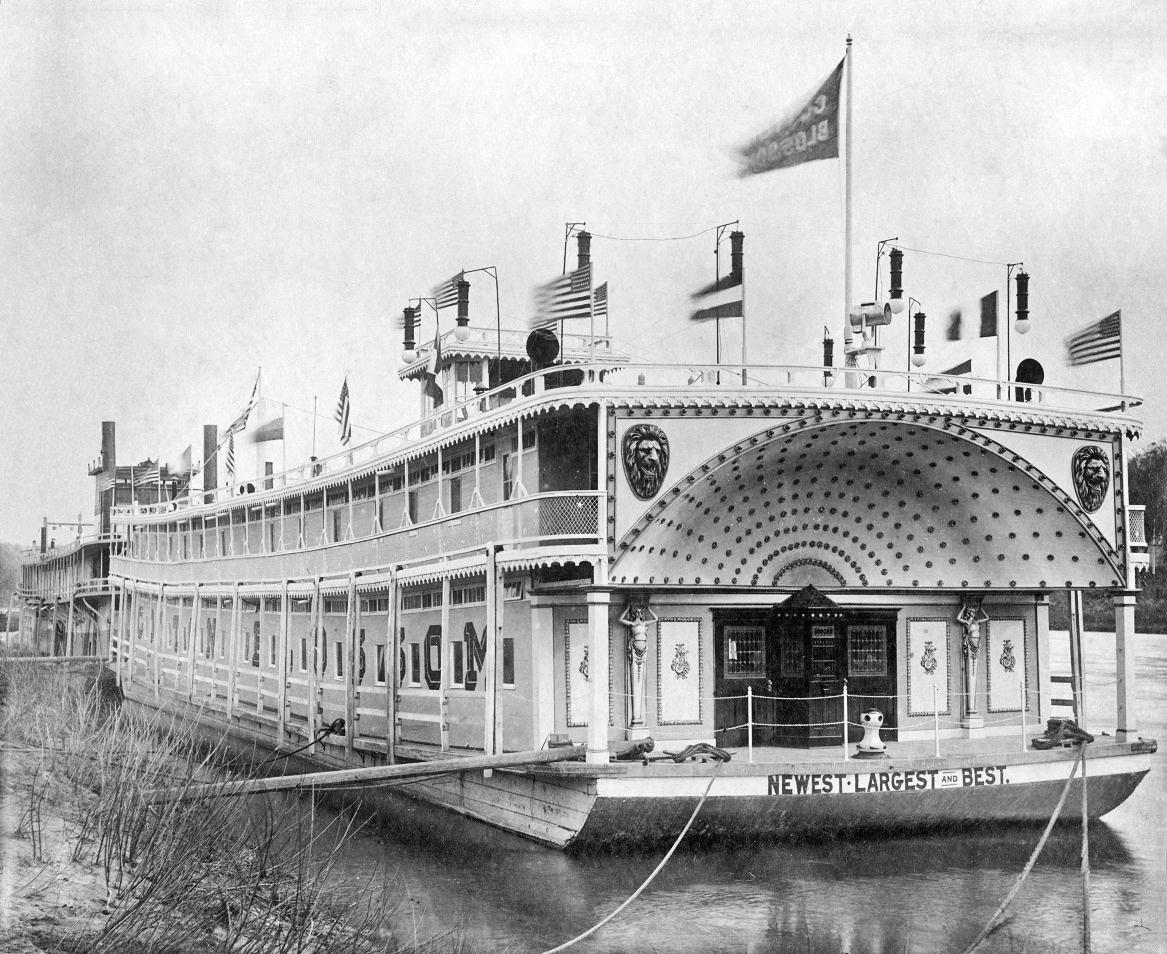 Today, both of those would get either fake laughs or outrage. But in the days before movie theatres brought high quality entertainment to your neighborhood, if you lived along America’s great rivers, you lived for the days when the showboats would show you flickerings of a wider world of music, comedy and fantasy.

When Edna Ferber published her book in 1926, this world was already passing away. She wanted to capture – before it was lost for good – something of that era. The last showboat, and the one which Ferber researched for her novel, burned just two years ago. 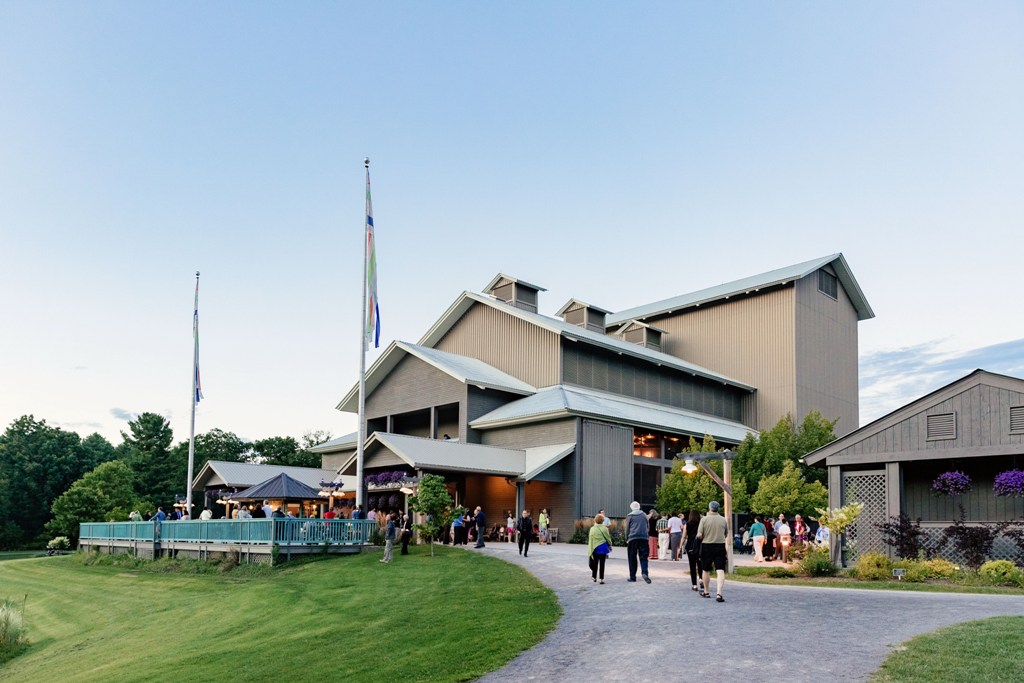 So this rich period in US history has passed away, most likely for good. The only tie is now the Jerome Kern/Oscar Hammerstein Showboat. It was given a no-expense-spared production at The Glimmerglass Festival. I caught the August 11 performance.

Both Kern and Hammerstein tried hard to convince Edna Ferber that her novel would make a great musical. In 1927 musicals were rarely taken from best-selling books, and never had racism, gambling addiction, families abandoned by fathers, and alcoholism not played for humor take center place in a “musical comedy”. 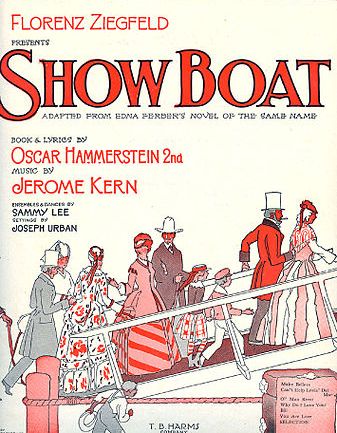 Showboat‘s problem is that Americans almost never get to see it in first class treatments. In central Europe, opera houses are completely oblivious to it, as it’s not a work that has entered the repertoire there. Performances are sparse to non-existent; I narrowly missed a production last April at the exquisite historic theatre in Baden bei Wien, a spa town near Vienna where Beethoven wrote his 9th Symphony. The Baden staging did not cause any major ripples, it came and went almost unnoticed by the press and audience, who prefer their Lehár and Strauss operettas in those regions of the world.

Is Showboat an operetta? A musical? Or an American opera? The lines blur; and that’s the greatness of the piece. 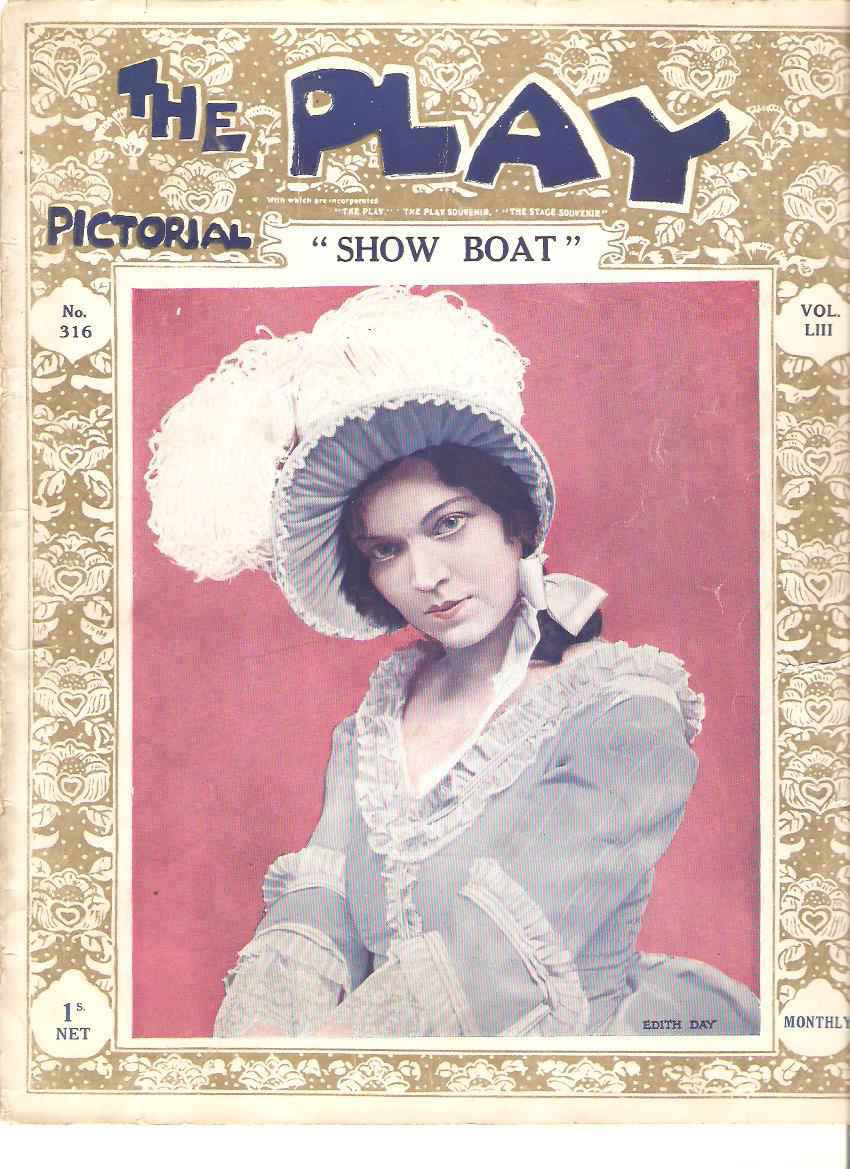 I’ve never understood why Donizetti’s Daughter of the Regiment is played at the Met and opera houses all over, but has less great music than Showboat. (And I yield to no one in my admiration for Donizetti.) Franz von Suppe’s Boccaccio was performed at New York’s Met in 1931 (just a few months before the Saturday broadcasts began, so we don’t know how it was). But Showboat never got near those portals: it was thought of as pure Broadway. 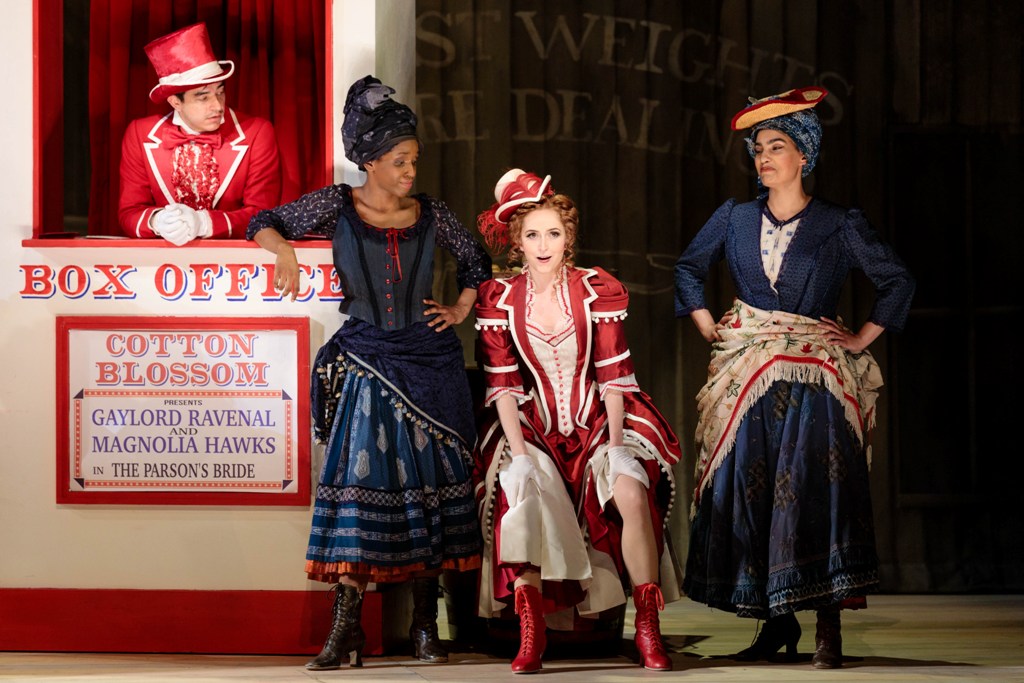 The number of Showboat opera productions in the USA are as rare as hen’s teeth. And to have this show staged at the 920 seat Busch Theatre at The Glimmerglass Festival, without the amplification that bedevils Broadway these days, and with a full orchestra, is a treat. A real treat!

So even if what happened after conductor James Lowefirst lifted his baton was awful, for me at least, I am nonetheless full of admiration that Showboat was being given such a lavish treatment at all.

Director Francesca Zambello already staged Showboat at San Francisco Opera in 2014, there is a DVD available from there, and it looks like Glimmerglas got the exact same production with sets by Peter J. Davison and costumes by Paul Tazewell. It’s all very lavish and colorful. Very far removed from typical European opera and operetta productions which are usually far more “dirty” and “sexualized”. You might say, they also feel more “real” or at least strive for “realness”.

The much debated race question in Showboat was addressed by Zambello by turning the “white” characters into overacting puppets and by trying to give the “black” characters as much to sing as the “white folk” in this Showboat universe. Considering the huge amount of music written by Jerome Kern that was not too difficult to arrange. 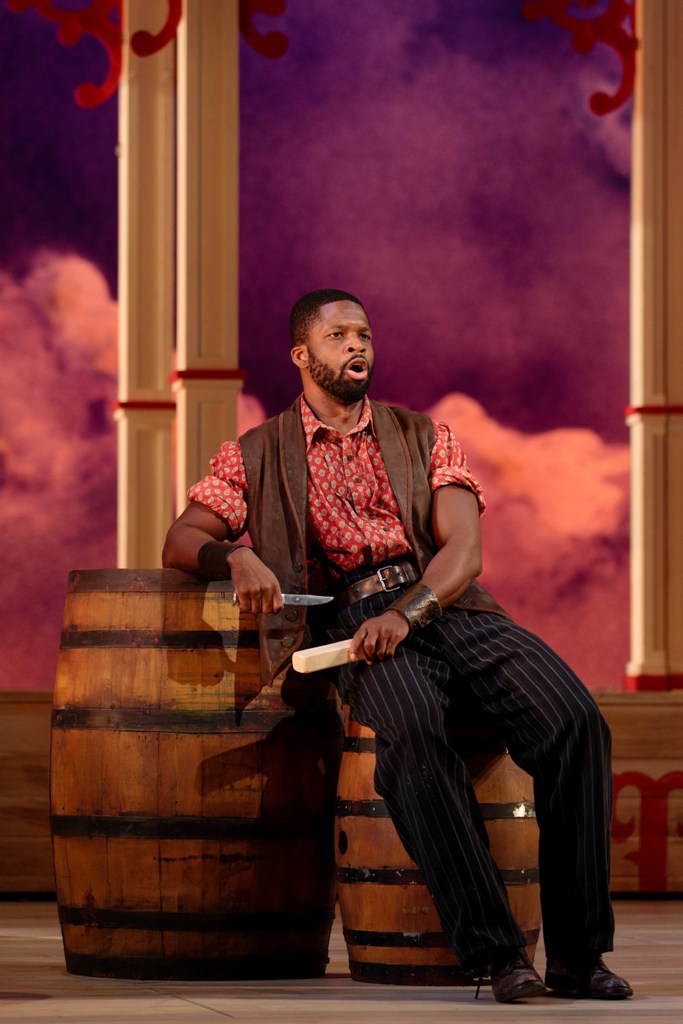 The plus of this production was that no money was spared. Both Queenie (Judith Skinner) and “Old Man River”-Joe (Justin Hopkins) were good, and I have to say better than all the other singers combined.

Gaylord Ravenal (Michael Adams) was a baritone, not the tenor of the 1927 version and the 1992 recording with Jerry Hadley (which tries to put in as much music as possible). He’s not supposed to be a great singer in the story, but an attractive gambler. So this Ravenal wasn’t really special, vocally. But he has one of Kern’s most haunting love duets, “You Are Love”, to sing, which is a clear nod at the older Broadway operetta tradition. Sadly, not only the Ravenal was not special, neither was Magnolia (Lauren Snouffer). And she really has a lot to sing beyond “You Are Love”. 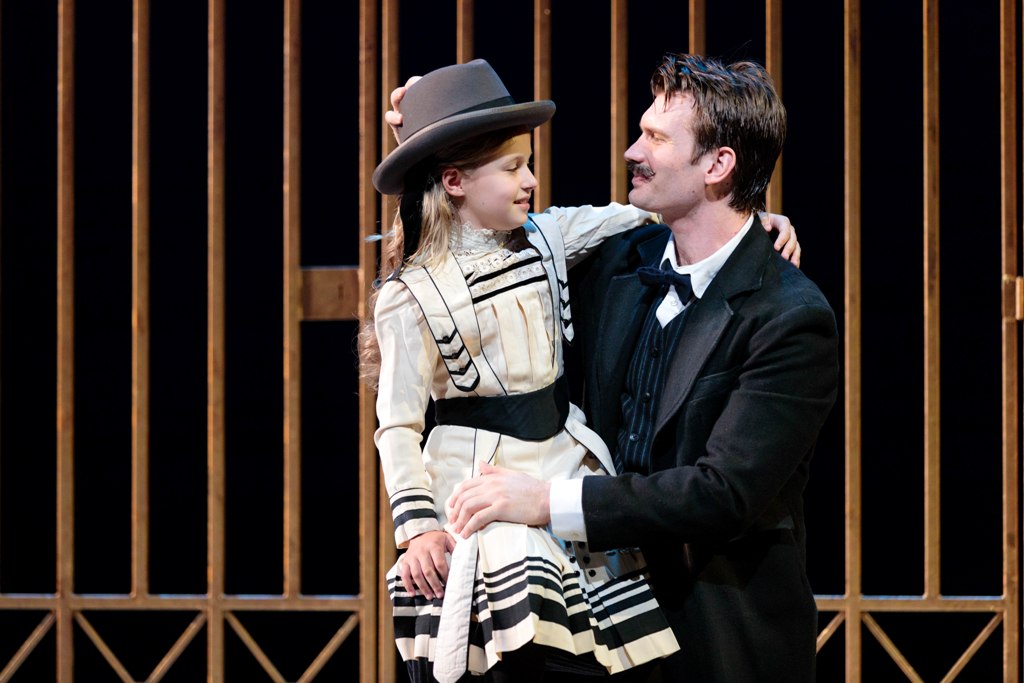 The father-daugher scene with Bella Crowe as Kim and Michael Adams as Gaylord Ravenal in “Showboat” at the Glimmerglass, 2019. (Photo: Karli Cadel/The Glimmerglass Festival)

One problem was the young daughter (Bella Rose Crowe). She didn’t age much from 1900 to the 1920s. If the touchstone of this show is the 1936 movie, as it is for me, this is a disappointment.

I hate to give any show a bad review. I know full well how much effort goes into every aspect of it. Each show represents a minor miracle of everything coming together. But from the first notes of the overture I could tell that something was lacking. Still the audience applauded at everything, it seemed to like the performance very much.

They didn’t seem to mind that diction of most singers was extremely poor. Without the supertitles, it would have been hard to understand what most of the singers were saying. Is the assumption that American audiences know all the lyrics by heart? 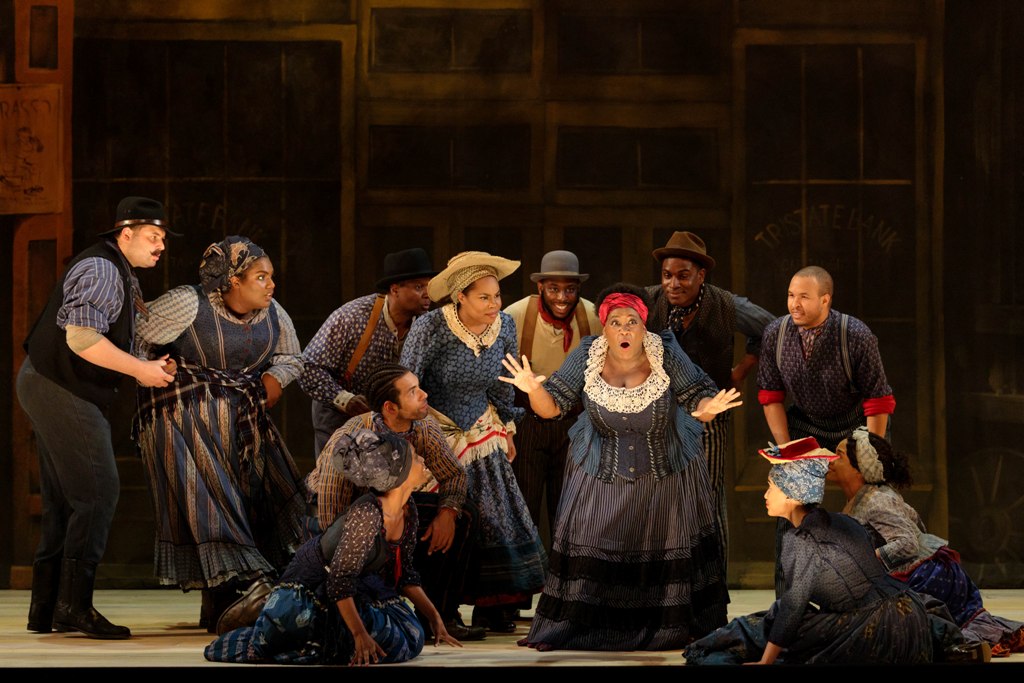 Judith Skinner as Queenie and members of the ensemble in “Showboat” at Glimmerglass, 2019. (Photo: Karli Cadel / The Glimmerglass Festival)

I hate talking about race, or even thinking about it. I’ve just seen so many different types of people that I know that what connects us is so much more important than what divides us. 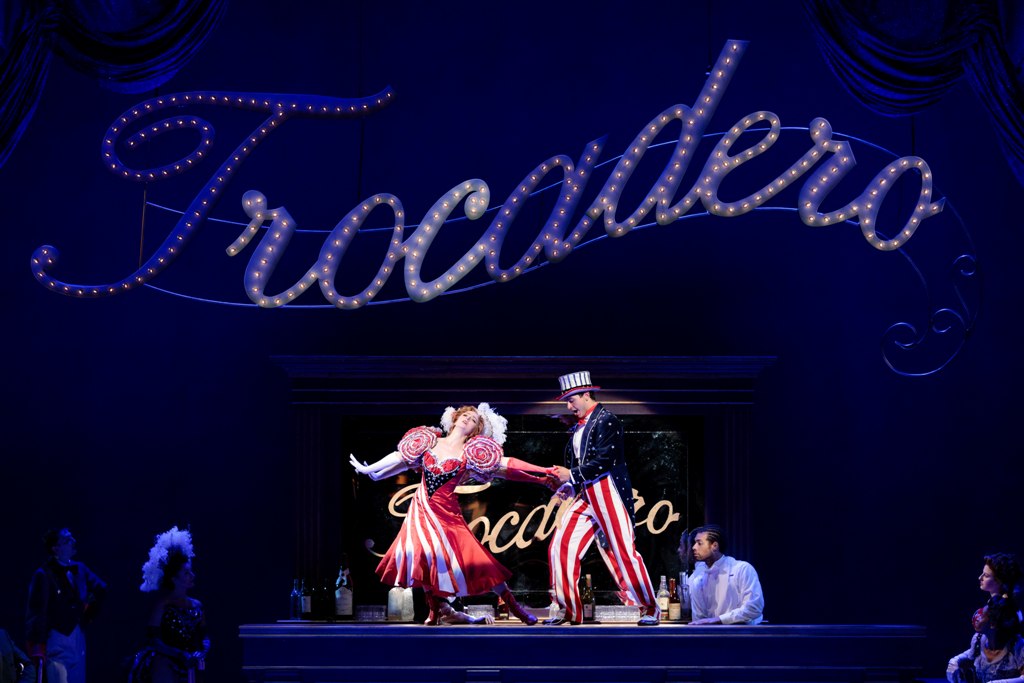 Showboat is an American story, with the plot ripped out our past. The 1900 section never fails to move me, since we know now that this was the beginning of the happiest time in American history. It certainly was the most optimistic one. It is the story of a young, gangly giant taking its place on the world stage. The arguments of what America has become since it became an Empire are still going on. To me, and perhaps only to me, that story is far more interesting than the racial aspect.

The sentimental songs so popular in 1900, and so unpopular today, were well done at Glimmerglas: “After the Ball Is Over” and “Goodbye My Lady Love”. But for those who care about racial things, the original show had the curtain go up on a group of blacks, and the first words heard were “Niggers all work on the Mississippi, Niggers all work while the white folks play”. That was meant to shock the audience, and shock the audience it did.

In the years since there have been all kinds of substitutes. The most common, and the one used here, was “Colored folks work…” But I have heard it as “Lots of folks work…” which really makes no sense, and “Here we all work….” which does. 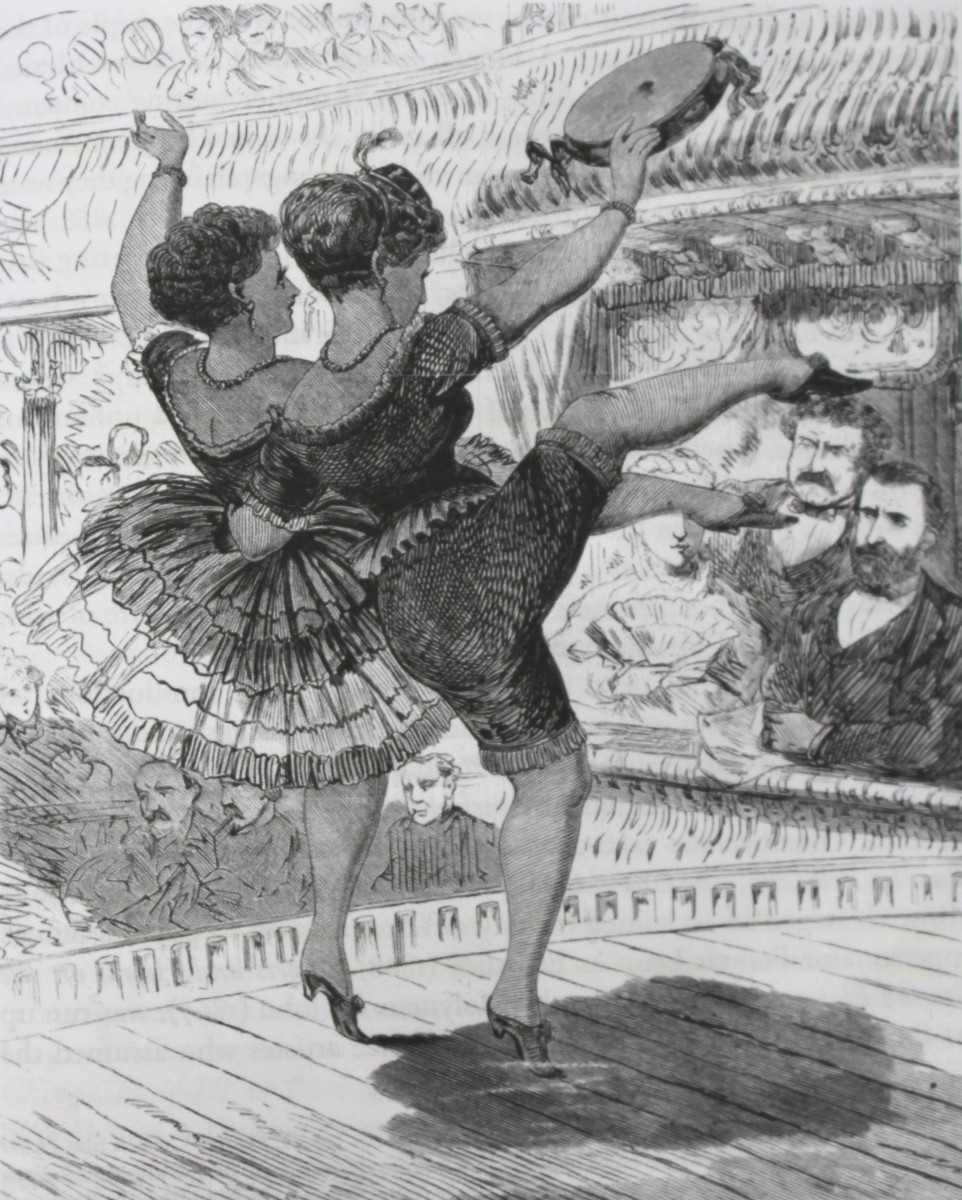 President-elect Grant and Jim Fisk watch “La Périchole” at the Fifth Avenue Theater in New York, 1869. As shown in the “Illustrated Police Gazette.” (From: Laurence Senelick, “Jacques Offenbach and the Making of Modern Culture,” 2018)

The story of the post-Reconstruction South is a sad one. In 1877, when President Grant was no longer in office to protect them, the laws keeping down blacks became cruel, and lasted for generations. In the 1920s era of the show’s birth, the Ku Klux Klan was active again, and lynchings were too common.

We all know this, or should. I hope we can get past it, but maybe I’m just out of step. I know that the African members of my family tell me that today’s world is so much better than it was when they were young. 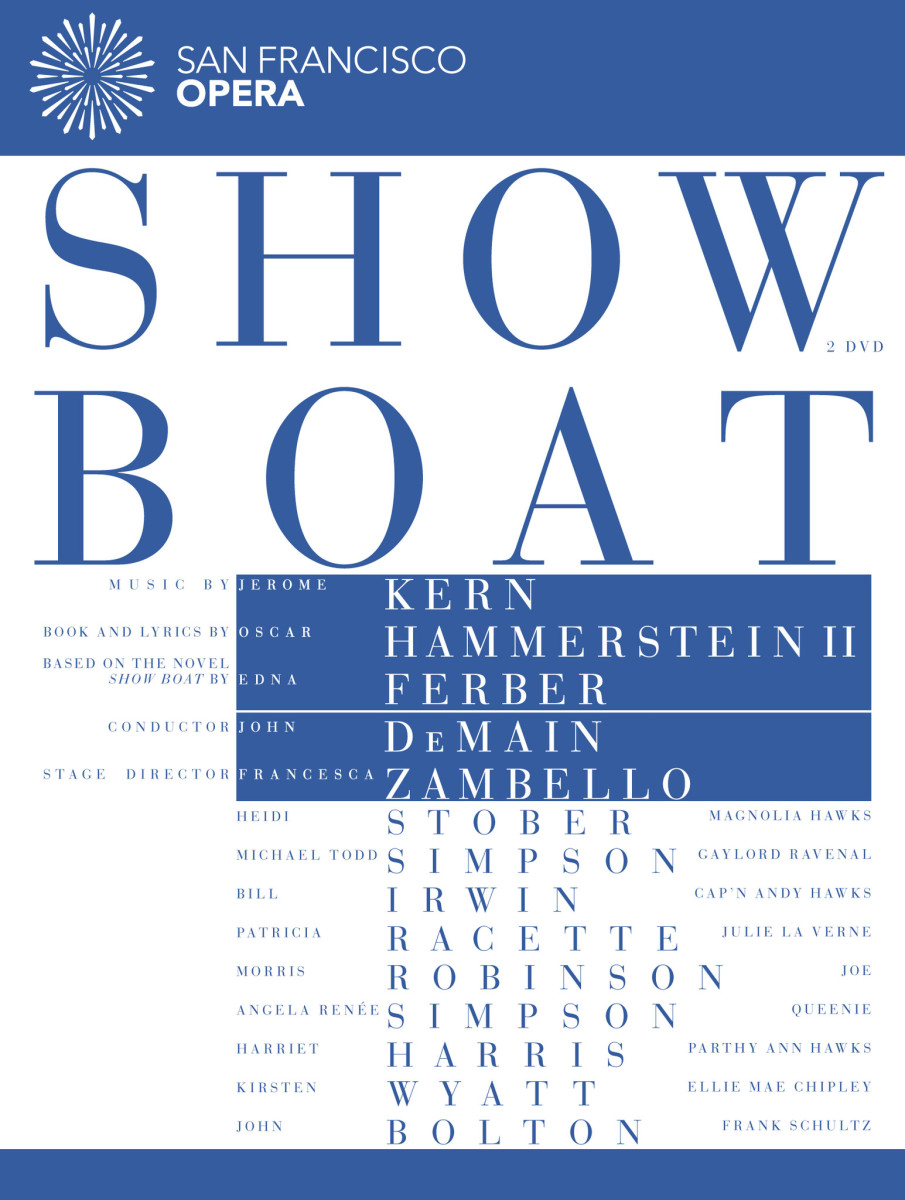 Yes, the plot does turn on interracial marriage. But for me, that is only one aspect. I wish more had been done to show the passing of the generations. In the 1936 movie, it ends with the daughter of Ravenal and Magnolia becoming herself a star. The river flows on, and we all have our parts to play, for a short while. Let’s be kind to each other while we’re here. After all, we’re all in the same boat.

So even if I did not love this Showboat production, you may love it. I hope you do.

For more information on the cast and performance dates, click here.