Conductor Georges Prêtre is generally considered one of the best interpreters of French music, and the list of famous recordings he made is endless. Sadly, there is hardly any operetta in his discography; instead of Prêtre the label EMI used Michel Plasson for their expansive Offenbach series and other French operetta projects. Now, after the death of Prêtre in January 2017, Deutsche Grammophon has released his “last” concert at La Scala on disc – and it offers two outstanding Offenbach interpretations. 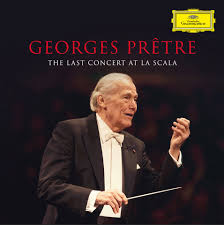 The CD release of Georges Prêtre’s final concert at La Scala in February 2016.

Obviously, La Scala and its Orchestra Filarmonica are not necessarily names you’d associate with French music. But for this live concert in February 2016 – a year before Prêtre’s death – they placed Ravel’s Boléro as the central item, after warming up with Beethoven’s Egmont and Verdi’s La forza del destino overtures. The Boléro, as a piece that’s been played to death over the years, gets an astonishing interpretation here which manages to sound “afresh” in countless details and sucks you right in with its pronounced difference. The 92 year old conductor makes the score climax in such an easy going way that it can knock you off your socks, without ever seeming labored. Plus, he does so at a surprisingly swift pace.

Before and after the Boléro you get Offenbach: first an instrumental version of his famous Barcarole, and then as an encore the Can-can from Orphée aux enfers. And I have to confess, both performances are magical.

The Barcarole is pretty swift too at 4’54 minutes, compared to earlier Prêtre versions which clock in at around 6 minutes. But it doesn’t feel hurried; rather the music unfolds – bit by bit – with the utmost delicacy, almost improvised. The way the celli soar up in the intro, and the way the tune is “sung” by the strings is hautingly beautiful, observant of never ending details, that it feels like hearing this equally over-familiar number for the first time. The orchestration shimmers in so many colors you almost drown. And, what’s more, Prêtre understands the importance of rubato.

At the end of the disc, after that eruption of the massive Boléro orchestral forces, you get the “Galop infernal” as a “Remembrance of Things Past,” reminding us of an older dance craze from France that conquered the world. Prêtre starts the music in the midst of the applause with a drum roll, and shifts to the intro with the utmost lightness of touch. He then bundles the brass for the main tune and blows you away with an almost ecstatic way of putting the accents in all the right places, and not being afraid to create a big bang by creating maximum contrast.

The Scala audience reacts with loud cheering and bravos. It makes me regret that Prêtre never recorded the complete Orphée aux enfers, or La belle Hélène, or the Grand Duchess of Gerolstein. (Not to mention Tales of Hoffmann, which is only available as a live performance on DVD from Covent Garden 1981, with Placido Domingo and Ileana Cotrubas, Agnes Baltsa and Luciana Serra in a John Schlesinger production. Sadly, Prêtre never went to the studio to preserve this opera.) He is an ideal Offenbach interpreter, with a keen ear for detail, and with drastic effects that never lose an overall elegant touch. 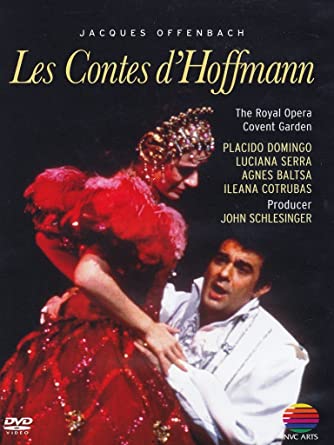 The DVD of Prêtre’s 1981 performance of “Tales of Hoffmann” at Covent Garden, with Placido Domingo in the title role.

It’s a memorable final concert at La Scala, signing off with Offenbach, after Prêtre already gave a French touch to two Viennese New Year’s concerts in 2008 and 2010.