You might be as baffled by this new release as I am: the recent production of Jaromir Weinberger’s “last Weimar operetta” Frühlingsstürme (1933) from Komische Oper Berlin is now available internationally on DVD, distributed by Naxos. It’s the same production of the spy thriller that had been streamed before on OperaVision, for a limited time; and the DVD arrives at the exact moment in which the company announced that it will not revive the show this season as planned, because of the ongoing Corona situation.

If you ask yourself why this DVD release baffles me, the answer is this: compared with the truly sensational revivals of forgotten operettas from the Weimar era that Barrie Kosky has presented at Komische Oper over the years, with “his” superstars Dagmar Manzel, Katharine Mehrling, Max Hopp et al, and with conductor Adam Benzwi re-creating that special sound universe in his own unique way, the Frühlingsstürme production offered Jordan de Souza, who is a very interesting young conductor, but without any noticeable special feeling for a late-Weimar “tone”.

He also has to work with “regular” opera singers in the lead roles which were originally created by Richard Tauber and Jarmila Novotna. It’s extremely tricky to find present day interpreters for any Tauber role. But instead of repeating what the company did when they cast Manzel in a Gitta Alpar role – the female equivalent to Tauber – and having someone with a totally different type of voice re-imagine something in her own convincing way, you now get young “house tenor” Tansel Akzeybek singing the Tauber numbers without any Tauber magic. And without any stage presence that could carry you through the production.

It’s not his fault, to be clear, but the casting director should have known that this was not a good idea; after all, Mr. Akzeybek already sang Prince Paris in Belle Hélène and Tony in West Side Story, demonstrating what he can and what he can’t do so well. Hyper-sensuous singing that hypnotizes the audience with flashy falsetto top notes and a darkly brooding legato are not among his stand-out qualities. And he’s not a newly interesting James-Bond-of-operetta either as Japanese Mayor Ito who is lured into betraying his allies by the Russian widow Lydia Pawlowska (sung here by Vera-Lotte Boecker as the dangerous “blonde poison”). The thriller-type action is set during the Japanese-Russian War of 1904/5.

The only “outsider” here is star actor Stefan Kurt as General Wladimir Katschalow who brings those extra elements to the production that the others lack in terms of stage presence and playing with the material. But the General is only a side-character; he cannot single handedly breath real life into proceedings here. Not in the way that Miss Manzel rocks the show in Oscar Straus’ Die Perlen der Cleopatra (1923) or Eine Frau, die weiß, was sie will (1932) where everything revolves around her, not the mention Abraham’s Ball im Savoy (1932).

So I do wonder why this moderately successful Weinberger production gets the DVD treatment, and the other shows don’t? Is it because it’s a “classic” approach to operetta that Naxos considers more “digestible” for international audiences? Are they worried that the “musical comedy” attitude that informs the other productions doesn’t fit easily with typical opera aficionados? 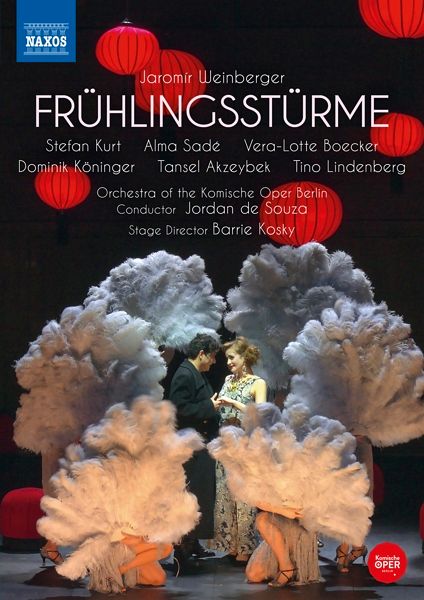 I don’t know the answer. All I can say is: both Perlen der Cleopatra and Ball im Savoy have been streamed, so there are filmed versions that could be put on DVD. And surely Oscar Straus and Paul Abraham are not more or less easily “sellable” than Jaromir Weinberger, right? As for Eine Frau, die weiß, was sie will: I’m not aware of any stream, but the production is a treasure – and so genial – that it should definitely be put on DVD, asap. It’s currently in the repertoire, even Corona can’t stop it, so you could film it now, if you really wanted to.

If you had planned to see Frühlingsstürme in Berlin – maybe in combination with the originally scheduled Schwanda, der Dudelsackpfeifer (1927), also by Weinberger – then this DVD is great news. You can watch the show and make up your own mind about the production, but also about the score itself.

Yes, it is fascinating to hear the reconstructed “last” Weimar operetta that premiered just days before the Nazis came to power in January 1933. Yes, some moments are haunting with that knowledge at the back of your head. But if you want Tauber/Novotna in full glory stick to Lehár’s Giuditta, written for them a year later. Or stick to Savoy written for Gitta Alpar a month earlier. And if you want a minimalistic Kosky production, then nothing beats Eine Frau, die weiß, was sie will.

Sorry for being so prissy here. But as someone who has seen all of the above productions multiple times, I am simply spoiled. I’m aware of that. (Stefan Kurt was also great in the divine production of Dostal’s 1933 hit Clivia, which would also benefit from a DVD release.)

Perhaps Naxos will dare to turn this Frühlingsstürme into a bigger Weimar Republic DVD series, since Babylon Berlin has created so much new buzz for this era. And while Naxos is at it: there’s another superb operetta production at Berlin’s Gorki Theater of Mischa Spoliansky’s Alles Schwindel (1931), with a knock-out cast. That music is on a different level to Weinberger’s somewhat stilted attempt to write a hit without any prior experience in the field of musical entertainment.

But with all that said: what great news that finally one of these Komische Oper operettas is being released on DVD and internationally. You have to start somewhere, better late than never…