Never heard of Louis Hirsch (1881–1924) and his Broadway operettas? Well, we can change that easily. Because our friends at the Operetta Archives in Los Angeles have just started releasing modern-day recordings of some catchy Hirsch titles that make you want to re-visit these turn-of-the-century shows again. And again. 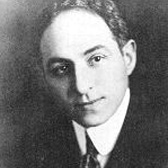 The New York-born composer reigned with Jerome Kern as a leading driver in transitioning American musical theater, in the second decade of the 20th century, from the operetta and music hall stylings of the past to a new “modern” brand of musical comedy—with witty, intimate, believable plotlines and a ceaselessly melodic musical score.

In his senior year at the City College of New York, Hirsch traveled to Europe to study piano at Berlin’s Stern Conservatory. He returned to the U.S. in 1906 and began working as a staff pianist in the Tin Pan Alley. He also began to write some of his own music.

Hirsch’s first assignment was writing music for the Lew Dockstader’s Minstrels. Soon, some of his melodies were interpolated into Broadway shows, including The Gay White Way, Miss Innocence, starring Anna Held, and The Girl and the Wizard.

In 1910, He Came From Milwaukee was Hirsch’s first full score. His Revue of Revues (1911) introduced French star Gaby Deslys to America. He subsequently wrote the music to many songs that Deslys made popular, including “The Gaby Glide”, “Come Dance With Me”, and “When You Hear Love’s Hello”.

One of his best jazz tunes is “It’s Getting Very Dark on Old Broadway”.

His first major success was Vera Violetta (1911), which made Al Jolson a star. For the Schuberts in 1912 and 1913, he contributed music to The Whirl of Society and The Passing Show. 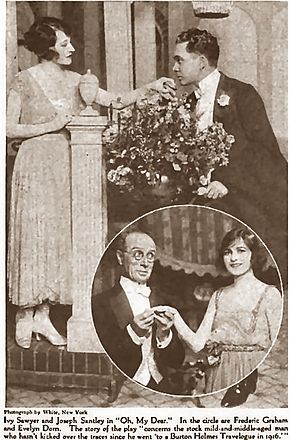 Scene from Hirsch’s “Oh My Dear”, in the typical operetta style of the early 20th century.

In 1915 his My Home Town Girl came out, the tale of a society rounder on attempted good behavior to qualify for a $1,000,000 inheritance. On the new CD Jesse Merlin is that society rounder, called Tony Darling. You might remember Mr. Merlin from the production of The Beastly Bombing, the modern-day Gilbert & Sullvianish operetta by Nitzberg/Neill, also produced in LA. Merlin was the President of the USA there, a role he successfully repeated in Amsterdam when Opera aan het Ij brought BB to Europe.

The My Home Town Girl recording of the full score with two pianos was the first in the new series that revisits rare musical theater gems of a bygone era. As a recording, I found it lacks charm. None of the singers seems to be having much fun with this music, which is sad. Because it’s a fun show, and should sound like that. (And Mr. Merlin is certainly a fun artist to watch on stage.) 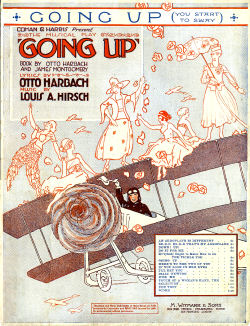 Sheet music cover for “Going Up!”

In 1917 Hirsch collaborated with Otto Harbach as lyricist on the musical Going Up (1917). This operetta is also out on CD now. The show was one Hirsch’s biggest hits, which exploited the then current fascination with airplanes. The new studio recording, with four-hand piano accompaniment, showcases Hirsch’s bottomless melodic well and the rhythmic and harmonic stylings that kept him apace with Jerome Kern.

Unlike the recording of My Home Town Girl, the quality of singing here is superb throughout, and everyone involved seems to be really enjoying themselves—Kristin Mellian as Miss Zonne (a telephone girl), Brian Maples as Jules Galliard, the French aviator and the many others in the cast. Also, the two pianists (Adam Aceto and Patrick Jonson) are having a ball playing this music, which is infectious. 23 tracks of pure joy that make you wish someone would put this show on – with as much aviation in it as possible – and start a new discussion of this early Broadway type of operetta/musical. 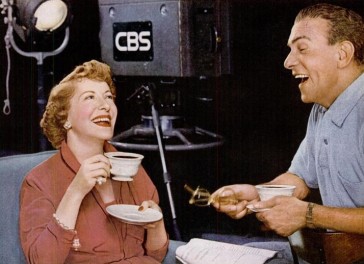 After Going Up!, Hirsch wrote Mary (1920), which includs “Love Nest”, his most successful song, which later became the Burns and Allen radio show theme. He also wrote music for The Rainbow Girl and See Saw, among others.

Other popular Hirsch songs include “Neath the Southern Moon” (also titled “‘Neath the South Sea Moon”), “The Tickle Toe”, “Always Together”, “Garden of Your Dreams”, “Hold Me in Your Loving Arms”, “Going Up”, “My Sumurum Girl”, “Mary”, “Love Is Like a Red Red Rose”, “When I Found You”, “Beautiful Island of Girls”, “My Rambler Rose”, “The Love Nest”, “I Am Thinking of You”, and “Annabel Lee”.

Hirsch was one of the nine founders of ASCAP in 1914 and an ASCAP director between 1917 and 1924. During WW1 he contributed songs to four editions of The Ziegfeld Follies, including “Sweet Kentucky Lady” and “Hello Frisco!”

The composer died in New York City of pneumonia at the age of 36. 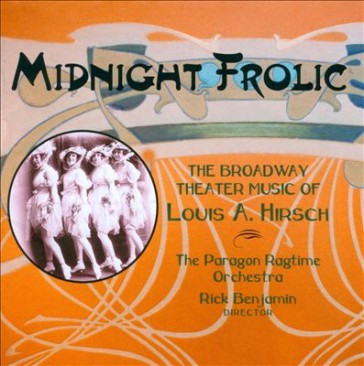 The All World Records CD with Louis Hirsch music.

It remains to be seen how many more Hirsch titles will come out on CD via the Operetta Archives. (And possibly, one day, on stage at the Ohio Light Opera which is associated with the directors of the OA.)

If you want to give Hirsch a try, listen to Going Up! You might also want to try Midnight Frolic: The Broadway Theater Music of Louis A. Hirsch on All World Records. (Listen to the track by pressing the “play” button at the bottom of the page.)