Applause now, please, for PS Classics and Lyric Stage of Irving, Texas, whose combined resources bring us the first complete recording of the 1954 masterpiece The Golden Apple with music by Jerome Moross and libretto by John Latouche. Long a holy grail for musical theatre buffs, the glories of this richly textured musical score appears complete on two discs for 135 minutes of pure listening pleasure. 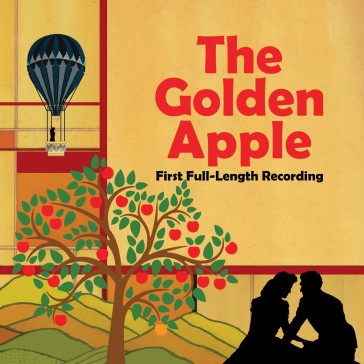 Cover of the new cast album of “The Golden Apple.”

When first produced by the Phoenix Theatre off-Broadway in 1954, critical acclaim propelled The Golden Apple to a Broadway transfer and a 125-performance run. Perhaps its through-sung structure denied it a longer run, The Golden Apple nonetheless won the New York Times’ Drama Critics Circle Award over its rivals Kismet and The Pajama Game.

And what caviar to the ear is Moross’ score! John Latouche’s lyrics are every bit his equal in wit, charm and narrative skill. Moross is perhaps better known as composer of film scores to The Big Country, The Cardinal and musical arranger for many more; his stage credits also include Parade (1935) and Gentlemen, Be Seated! (1963). Latouche died young in 1956 before he could complete lyrics to Leonard Bernstein’s Candide, but he is best remembered for Cabin In The Sky (1940), Duke Ellington’s Beggar’s Holiday (1946), Ballad Ballads (1948), The Ballad Of Baby Doe (1958), less so for Polonaise (1945) and The Vamp (1955). Latouche penned the lyrics to Earl Robinson’s “Ballad for Americans” made famous by Paul Robeson.

The ambitious story of The Golden Apple transposes the plot outlines of Homer’s The Iliad and The Odyssey, resetting the story in America’s northwest state of Washington, a small town called Angel’s Roost, in 1900. Ulysses (Christopher Deaton) returns home a hero from the Spanish-American War to his wife Penelope (Kristen Lassiter). When the town siren Helen (Danielle Estes) is seduced by a travelling salesman Paris (Hayden Clifton), Ulysses leads the men of Angel’s Roost on an expedition to the big city of Rhododendron to recover her. Act 2 finds Helen chastened in the big city. Once Ulysses defeats Paris in a boxing match, she reurns home to her mouse of a husband Memelaus (Andy Baldwin). But Ulysses and the men of Angel’s Roost are wowed by the bright lights and evil temptations of Rhododendron. Fleeced by Mayor Hector (James Williams) and his cronies, the men of Angel’s Roost are decimated, and a humbled Ulysses returns home alone to the arms of his long-suffering wife Penelope. 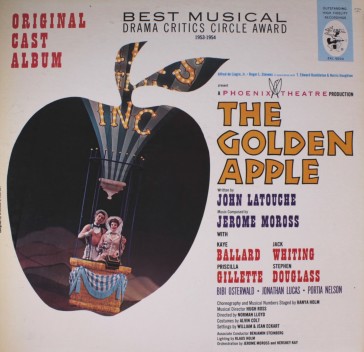 The 1954 RCA Victor recording of The Golden Apple did a great injustice to the score, its 48-minutes truncated the musical numbers and framed it with clumsy narration. But the 48 tracks on PS Classics’ new recording, abetted by the complete libretto, reveals the complete score in all its glories, with a 38-piece orchestra and 43-member cast. The show’s most famous song, “Lazy Afternoon,” gets a sultry rendering from Danelle Estes’ Helen. But who can resist the jaunty “Store-Bought Suit” for Ulysses and his men and “My Picture in the Papers” for Helen, the seductive charms of “Nothing Ever Happens in Angel’s Roost” and “A Good Girl,” the music hall bounce of “Hector’s Song” and “Scylla and Charybdis”? The sheer melodic beauty and grace of its ballads “My Love Is on the Way,” “Windflowers,” “It’s the Going Home Toegther” and “We’ve Just Begun.” And the rousing male choruses of “It Was a Glad Adventure,” “Come Along Boys,” and “The Departure for Rhododendron.” This is musical comedy in a rich and varied palette of styles, accessible yet distinctively melodic, a true smorgasbord of musical theatre desserts that demands repeated hearings.

Let us credit conductor Jay Dias for eliciting musical perfection from his orchestra, and finding nuances of character and emotion from the singing cast. It is therefore no surprise that The Golden Apple is not more often done, because it demands so much of its cast. Let us hope that PS Classics recording will inspire more full scale stagings, with Hershy Kay and Jerome Moross’ elegant orchestrations. Rather than an on-line download, I would urge you to purchase the actual 2-cd set with its 60-page booklet with its libretto, history of the show, production photographs, an excellent value for the listed retail price of $14.99. Having first heard and seen The Golden Apple with full orchestra in a superlative staging by Word Baker in Boston some 45 years ago, this recording is for me truly a dream come true.