In case you missed it during the last week, the topic of “boylesque” is not off the menu here. On the contrary, right now you can see two very charming representatives of modern and intelligent boylesque in Berlin at the Bar jeder Vernunft performing a program entitled Ass-Dur: 3. Satz: Scherzo Spirituoso. 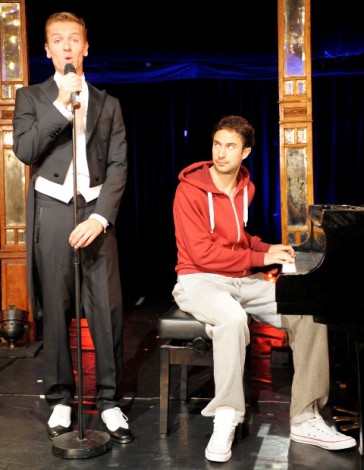 The two boys behind the duo “Ass-Dur” – a brilliant musical comedy act – are blond Benedikt Zeitner and dark haired Dominik Wagner. One of them looks like a re-born Max Raabe, stiff tuxedo, stiff upper lip, stiff everything. Zeitner plays an uptight “music historian” who loves to lecture his low-comedy friend in a track suit outfit. Together, these two create cabaret magic that will delight fans of classical music, too. Because they show how much fan can be had with classical music when you shake it up a little.

Their latest show 3. Satz: Scherzo Spirituoso is the third installment of a successful series. It’s not as dazzling as the first two parts, which had more acrobatic and viruoso moments. But if you stick it out to the end, at the Bar jeder Vernunft, you will be rewarded with some funky encores. And you will be treated to a real live strip – in which both men undress while playing Mozart’s C major sonata while they swap outfits. It’s a stunt they already pulled off in earlier shows, but since the last show Benedikt Zeitner has noticeably spent time at the gym. He now impresses his audience with a hyper-ripped body that can make you forget about Mozart for a split sec. 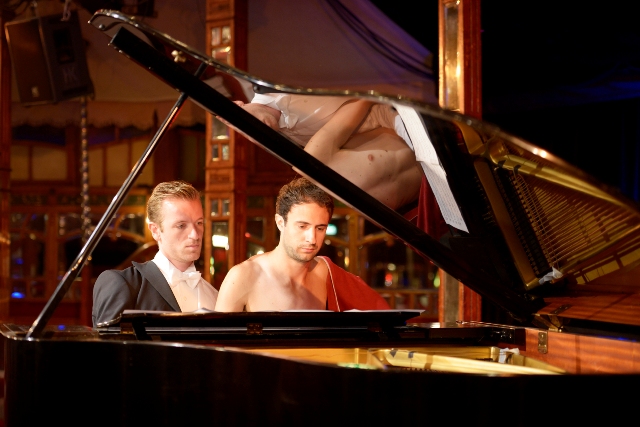 Their singing and dancing – in a hilarious boy band parody, for example – is highly amusing. It’s a shame they haven’t included more “operetta” in their third show. Maybe that’s something for the next installment of their cabaret series? It would certainly give a new twist to their program which, of late, has become slightly repetitive. A fresh breeze of operetta craziness could do the trick for 4. Satz: Furioso fantastico.