Here it is, a first look at the new La belle Hélène in Hamburg. The large-scale production by Renaud Doucet and André Barbe opened last night at the Hamburgische Staatsoper. American mezzo-soprano Jennifer Larmore took on the title role. 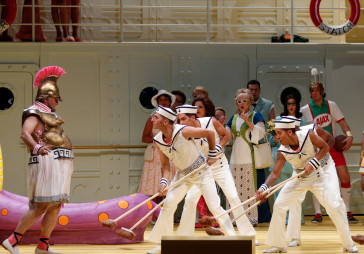 In this little video, however, the most striking feature is not the diva but the flower power costumes byMr. Barbe, and the dancing Greek presidential guards, the “Evzoni” (Εύζωνοι), in “traditional” white outfits with red hats.

The video seems to be heavily inspired by similar clips the Komische Oper has issued for PR purposes. Strangely, the wild choreography doesn’t works as effectively with Offenbach’s different style music – different to Nico Dostal, Paul Abraham or Cole Porter. But you get the idea, which spells out: f u n !

And the “Trio patriotique” sung by a swimming pool is not without its charm either. Let’s see what the press has to say about this staging on Monday.

The fact that the Hamburgische Staatsoper opted for a French sung and spoken version, which is highly unusual for Offenbach performances in Germany, may indicate that there are plans to film this production and release it in DVD internationally, where the language choice would work to its advantage. Stay tuned for more information to come.