The folk who created the musical works of Meilhac, Halévy, Crémieux, Hervé and their colleagues, and of the parallel composers, headed of course, by Jacques Offenbach, who musicalised their works in the 1850s and 1860s, have always fascinated me. The little biographies of those actors and actresses, even the most buzzwordy and 21st-century ‘famous’ of them, which you see all over the place, are most often thirty-third-hand, not to say skimpy, so I thought I would have an in-depth go at one of the less buzzwordy ones … we really don’t need another, even bony, Life of Désiré, Dupuis, Léonce, Pradeau, Schneider or Bouffar … so I turned to the gentleman known as Potel. 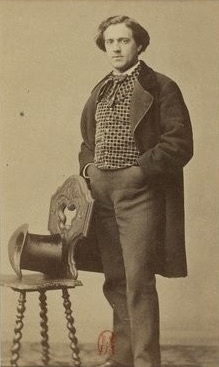 If you were going to summarise the career of ‘Potel’ in a few lines, I suppose you would just note that he created leading rôles in Le Pont de Soupirs, Monsieur Choufleuri, Les Bavards, Le Roman comique, the strangely underrated M Dunanan père et fils, Vert-Vert and Fantasio for Offenbach, and supporting ones in Bizet’s Djamileh and Carmen, and in Guiraud’s Piccolino, during a period of nearly twenty years almost unbroken performance on the Parisian musical stage (1858-1877).

But there are another eight years or so, back to 1850, to tack on to the beginning of that career. And many, many, many other shows, many of them ephemeral, many of them reprises featuring our man in roles first playes by others.

So, if you just wanted the bony biog, stop here. I’m going for the whole pig.

‘Potel’ was the stage name of Pierre Armand Piau. When he died, it was reported that he was 45 years old. He was actually 48, and had been born in Paris 3 July 1830. His father, Thomas Piau, was a wine merchant, his mother Marie Anne Legros (m 25 September 1822), and there was at least one elder sister, Anne Antoinette Piau (b 8 October 1826).

I say ‘at least’ because the Parisian press reported that ‘Mlle Anna Potel’, 1st prize for acting at the Conservatoire, who debuted at the Odéon in 1844, was the sister of Mlle [Pauline] Potel of the Théâtre Beaumarchais, who was also said to be our man’s sister. I seem to see Anna at the Théâtre Montmartre in 1847 and the Ambigu in 1849-50, while Pauline is at the Variétés … so I guess they are not the same person. Oh. A theatrical Mlle or is it Madame Potel died in 1852 aged 30. Possibly Anna? The fine site www.artlyrique.fr says Pauline died in 1888. And what’s this? A brother ‘inspector of the Port of Le Havre’ died July 1869 aged 31. He had lost an arm at the siege of Sebastapol…  And who is Mme Potel, in 1868, playing at Antwerp, surely it’s Pauline … More investigation needed.

Back to Armand. Who seems to have inherited, rather than chosen, the name of ‘Potel’. A slightly unfortunate choice, in all, for the fruiterers and caterers ‘Potel and Chabot’ were to become a byword in Parisian life. It was rather like calling yourself ‘Miss Fortnum’.

Although his sisters were into the mainstream theatre from their teens, Armand apparently started his ‘career’ in the goguettes, those Parisian singing-rooms, the equivalent of the London pre music-hall joints, where men gathered to gossip, drink and those who could sing ‘added to the harmony of the meeting’. As in London, the Paris goguettes produced a few favourite singers of songs of the sentimental or comic genre who would go on to the professional halls or cafés-concerts, with their male/female audiences, and one of these was handsome young ‘Potel’. 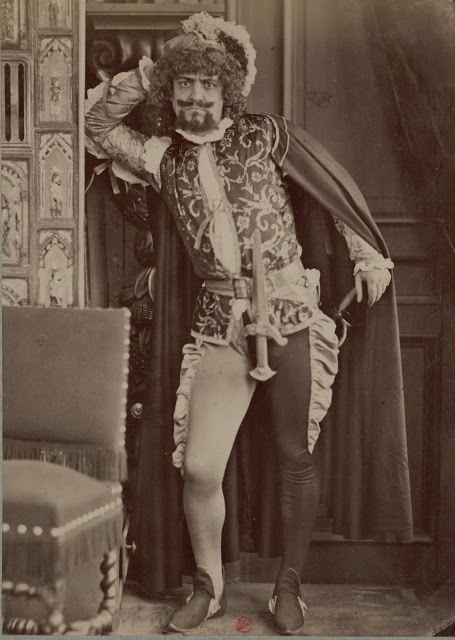 Armand, naturally, went for the sentimental ditty. The little sketch of his early career written as an obituary by Jules Prevel is more charming than precise, and doesn’t give us any dates, merely the approximation that, at his debuts, he was ‘twenty years old’ and the ladies called him ‘Le bel Armand’. And that he went on to appear at Charles Mourier’s Folies-Dramatiques in the Boulevard du Temple.

The obituary in La Chanson mentions Chez Montié in the Place de la Corderie du Temple. Well, I imagine the goguettes didn’t make the press, but I pick him up at at the Salle de la Redoute, Rue Grenelle St Honoré, in 1850, giving Mme Renard Tissot’s ‘N’effeuillez pas les marguérites’, ‘Ma voisine’, ‘Les Souvenirs’ and a Duo des mousquétaires with one M Cazot. 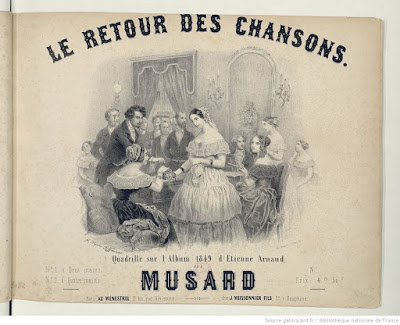 (Aside: I notice that one of the ladies on the books of the Folies at this time was Mlle Legros. Not Mama?)

His next engagement seems to have been at the Théâtre and Concert de Belleville (1853, Jocko, Guillaume in Stella, Delaroche in L’Honneur de la Maison, Victor in Les Lilas de Romainville, Jean de Beauvais in Les Deux voleurs) before, in June 1854, he joined the company at the Théâtre du Luxembourg. Another current member of the company was a young Belgian comedian-singer, Jules Dupuis. His employment was still the same: songs between the pieces – ‘Ce que femme veut’, ‘Pauvre homme’, duo ‘Marquis et Marquise’, ‘La plainte du mousse’, ‘Nous n’irons pas au bois’ – but an increasing amount of roles in the vaudevilles of all kinds which made up the entertainment. 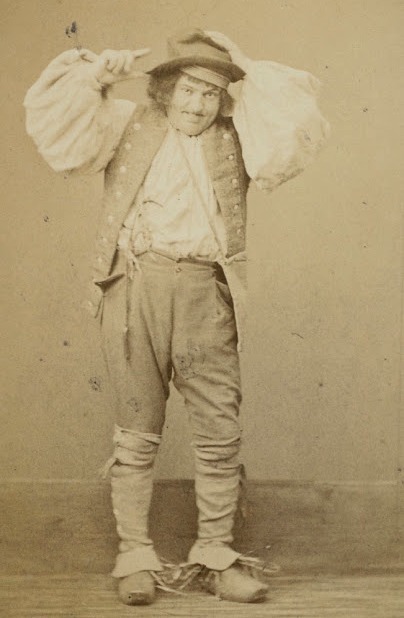 At the Théâtre des Variétés

Sister Pauline had been for a decade a much-liked member of the company at the Théâtre des Variétés, now Armand joined her for the little while left before her departure. 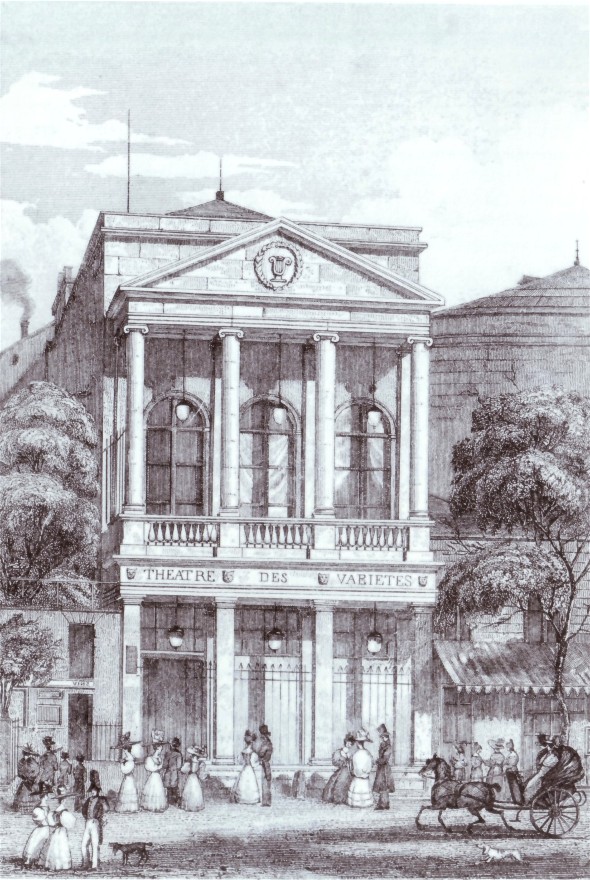 The Theatre des Varietes in Paris.

The Company of the Théâtre Lyrique

His next ‘shop’, however, was, and it was now in February 1858 that began the career for which Potel (potted version) in known. He joined the company at the aptly-named Théâtre Lyrique, and started from the bottom again.

His first part was as ‘a seigneur’ in Semet’s La Demoiselle d’honneur, but in March he took over from Fromont as the juvenile man, Léandre in Gounod’s two-months old Le Medecin malgré lui. He was in the original cast of the 1-act Don Almanzor (16 April 1858,  Don Felix ‘bien gauche et ben empêché’), succeeded to the parts of Mathéo in Maillart’s Gastilbelza (‘Sonnez, cloches de mon village’), Preciosa (Lorenzo) and Le Perle du Brésil (un chef Brésilien, Wartel was another) and, before the end of the season created two little operettas in concert: Henri Salomon’s Au printemps and Hocmelle’s La Mort de Socrate. During the relâche, he went with Delphine Ugalde to Spain the play a selection of little operas.  In 1859, he was seen in Lajarte’s 1-act Mam’zelle Penelope (Landry, with a bourrée danced with Mlle Faivre), in Semet’s vastly overblown Gil Blas (Nunez), the 1-act Les Valets de Gascogne and a piece named Maître Palma, as well as appearing with Mme Ugalde in the durable Les Voitures versées, before his time came again to an end and he moved on. This time to the Bouffes-Parisiens. 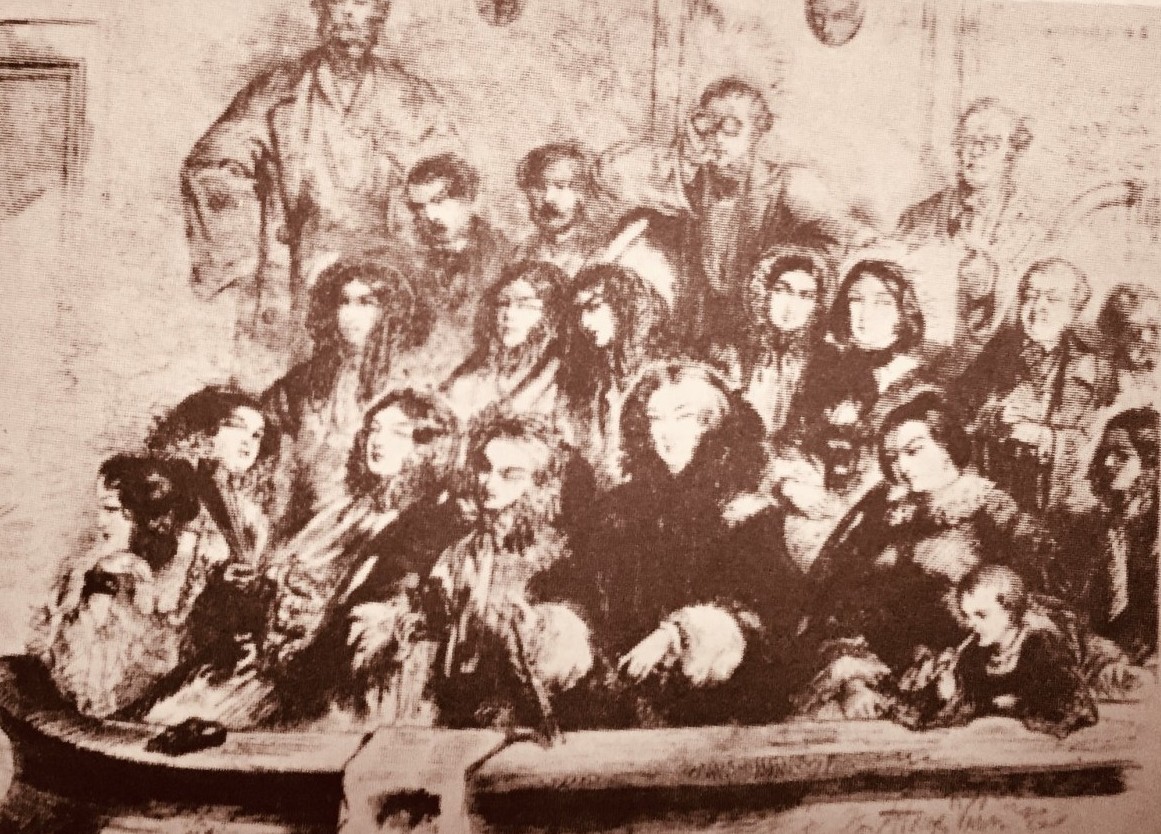 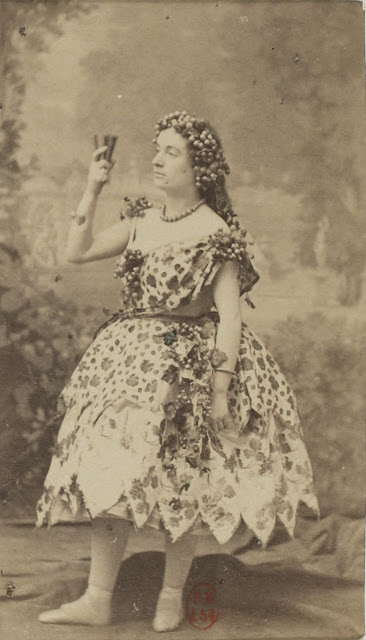 In the off-season, he travelled to Vienna, Pesth, Berlin and Brussels with the Bouffes troupe playing his original roles in L’Hotel de la Poste and Le Pont des soupirs, as well as Tayau’s part of Guido in La Chatte metamorphosée en femme, Bel Oeillet in Le Polka des Sabots and the role of Babylas in the new Monsieur Choufleuri. When the Bouffes reopened he introduced Parisians to Monsieur Choufleuri as well. 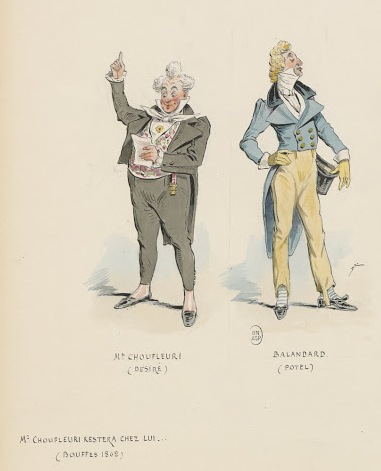 Costume designs for Offenbach’s “Monsieur Choufleuri” with Potel on the right side. (Photo: Collection of Kurt Gänzl)

The season was a slightly disappointing one for Offenbach. If the little Monsieur et Madame Denis (Bellerose, ‘un artiste distingué, intelligent et naturellement comique’) did well, the full-length Le Roman comique (L’Aubespin, ‘Potel est magnifique: costume, diction et gestes lui ont valu une véritable ovation’) was a failure, and the delightful tale of M Dunanan père et fils in which Potel had a grand role as the charlatan Lespingot did not take off as it ought to have. Some performances of Apothicaire et perruqier and a ‘superbe’ performance as Ramasse-ta-tête in a revival of Croquefer, teamed with Pradeau, Léonce and Géraldine, could not compensate.

The off-season at Ems included performances of Le Rendez-vous bourgeois, Le Café du roi, Les Bourguinonnes and the first version of Les Bavards. The original cast of this piece included Mlle Girard (Inès), Mlle Baudier (Béatrix), Wartel (Sarmiento) and Potel, the latter playing the part of Roland which (in spite of what Wikipedia claims) would later become a travesti role, played in Paris by his frequent colleague, Delphine Ugalde.

Potel would not, however, be around the Bouffes by the time Les Bavards got its Paris version. Laget had left the Opéra-Comique, and his replacement was to be Armand Potel. With one break of a year, in 1873, when he returned for a fairly unremarkable season at the Bouffes (where the ‘bouffe’ tradition had wittered away into opérette), creating La Petite Reine, La Rosière d’ici and Les Pattes blanches, he would remain at the Opéra-Comique from 1862, and his debut in Mocker’s role of the miller in the little Gevaert piece Le Diable au moulin, until his retirement in 1877.

It has to be said that those fourteen years years were not the most fruitful in memorable new works of the theatre’s existence. Apart from his role as Dancairo in Carmen, Potel did not, truthfully, create an enduring piece. A few works which are remembered today because of their writers or composers, but nothing to match the pieces from previous years which he played in repertoire — the works of Auber, Hérold, Grétry, Massé et al. So, there’s no use in doing anything but exactly what the artlyrique.fr website does .. list them. Artlyrique has been selective.

I am going to try to be as full as I can, so here goes … worklist under construction!

1867 takes over Laertes in Mignon after Couderc and Ponchard, Ali-Bajou in Le Caid, Le Maître de Chapelle at Etrétat 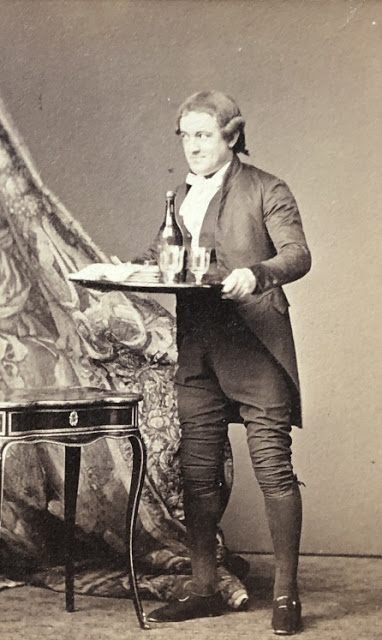 During his years at the Opéra-Comique, Potel was a frequent performer at concerts and Benefits, often with others of his colleagues, and often with a variety of comic scenas.

Not without my daughter?

After the completion of his time at the Opéra-Comique, Potel effectively retired. He died a year or so later (23 January 1879) while in Montpellier (6 rue de l’Observatoire), following the career of his daughter. 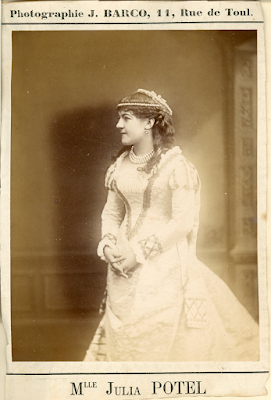 The daughter is another wee problem. She was enrolled at the Conservatoire (the records of which are normally very accurate) as Marie Julie Parizot ka Potel. I don’t know where the Parizot comes in. I also didn’t know that Armand had a wife.

Illegitimate? But ‘Julia Potel’ was reported, from early on, as Armand Potel’s daughter.

In 1887 she married Louis Napoléon Bernard, manager of the Marseille Grand, who died the following year. She later became Mme Aguado. An attempt to return to the Paris stage in 1898 was not successful.