Musical comedy in 2 acts by Owen Hall. Lyrics by Harry Greenbank and Adrian Ross. Music by Sidney Jones. Additional music by Lionel Monckton. Daly’s Theatre, London, 8 June 1898. – The authors of the vastly successful The Geisha swapped that piece’s picturesque Orient setting for a picturesque Ancient Roman one for its successor on the stage of London’s Daly’s Theatre. 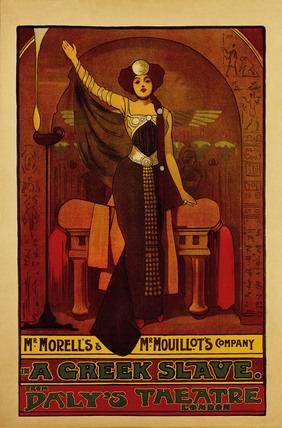 Advertisment for “The Greek Slave” at Daly’s Theatre, London, 1898.

Resident prima donna Marie Tempest was cast as Maia, daughter of the Persian soothsayer Heliodorus (Huntley Wright) to whom all matronly Rome runs for news of her future. The Geisha’s other stars were cast as their slaves: the pert Iris (Letty Lind), the sculptor Archias (H Scott Russell), and the exceedingly well-proportioned Diomed (Hayden Coffin) who has served as a model for his fellow slave’s marble-chipping. One day, the Princess Antonia (Hilda Moody) comes to consult Heliodorus’s oracle and, encouraged by the vengeful prefect Pomponius (Rutland Barrington) whom the princess has spurned, Maia announces to her customer that the God of Love has fallen in love with her. The God of Love is Archias’s statue of Diomed, and the plan is to trick the cold (to Pomponius) Antonia into in her turn wasting her heart’s sentiments on a piece of icy marble.

But Heliodorus, determined to break up the love affair between his daughter and his handsome slave, substitutes the real man for the statue and so Diomed goes home with Antonia. It takes the entire second act – disguises, low comedy and much music and antics set during the festival of the Saturnalia – to unwind the complications thus entwined. 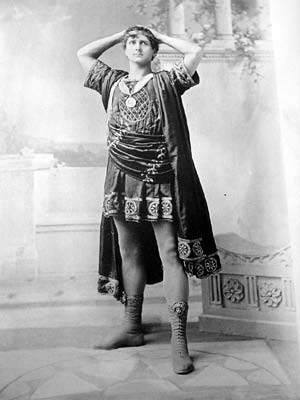 If the text of the piece got a little chaotic in its Saturnalic second half, as it indulged in an extended burlesque of Cyrano de Bergerac and a bevy of other topicalities, the score, on the other hand, never flagged. Miss Tempest had a delightful little piece about ‘The Lost Pleiad’ and a romantic ballad ‘The Golden Isle’, Miss Lind followed her Tomtit and Parrot tales of the two previous Daly’s shows with the Aristophanic fable of ‘A Frog He Lived in a Pond-O’, Wright described himself patteringly as ‘The Wizard’, and Barrington complained, with many a modern-day reference, that ‘I Want to Be Popular’, whilst Coffin heroically longed for ‘Freedom’ in an extremely baritonic drawing-room solo, alongside some particularly attractive ensembles. 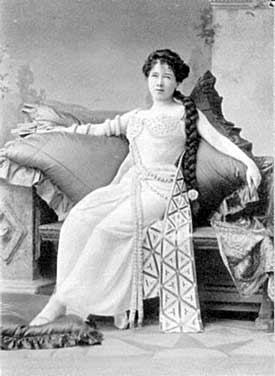 Marie Tempest as Maia, daughter of the Persian soothsayer Heliodorus.

A Greek Slave, for all its attractions, could not equal the popularity of The Geisha. However, on its own terms, it did well enough. It played for a year at Daly’s (349 performances), went into a second edition, with the usual bundle of fresh songs and scenes, toured lengthily, and was eagerly picked up by other countries where The Geisha had become a favourite. 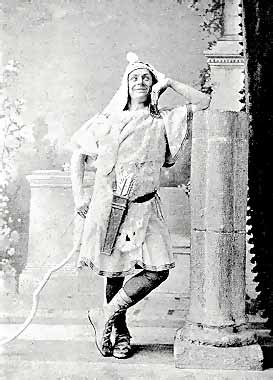 In 1926 the new owner of Daly’s Theatre, Jimmy White, decided to revive A Greek Slave, and mounted a London-bound production with José Collins starred as Maia. Dogged by squabbles and inefficiencies, the production folded without even getting to London.