The small spa town of Baden-bei-Wien, 26 kilometers south-west of Vienna and with a population of 26,000, boasts a 500 seat Jubiläums Theater built in 1909, with a company that produces operetta, musicals and, occasionally, opera. I understand that productions vary in quality, but  Fred Raymond’s operetta Maske in Blau, first seen at Berlin’s Metropol Theatre in 1937, i.e. the 4th year of Nazi rule in Germany, must be one of the very best they have on offer. 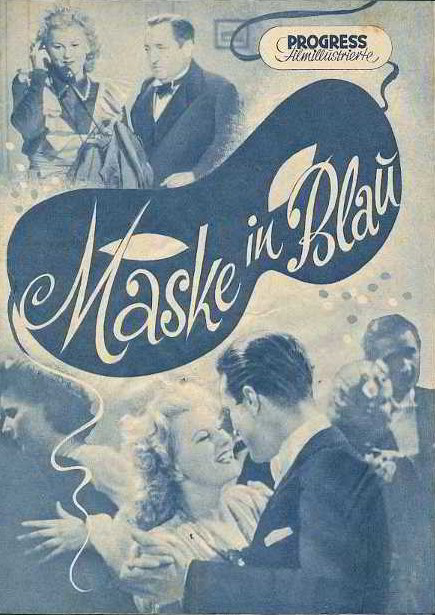 The plot follows the young artist (Armando) from San Remo to Argentina in pursuit of Evelyne, the subject of his painting ‘Maske in Blau.’ He takes along two pals (Franz and Josef) together with a noisy soubrette (Juliska) and together they foil the machinations of the beastly Pedro who claims to love Evelyne. 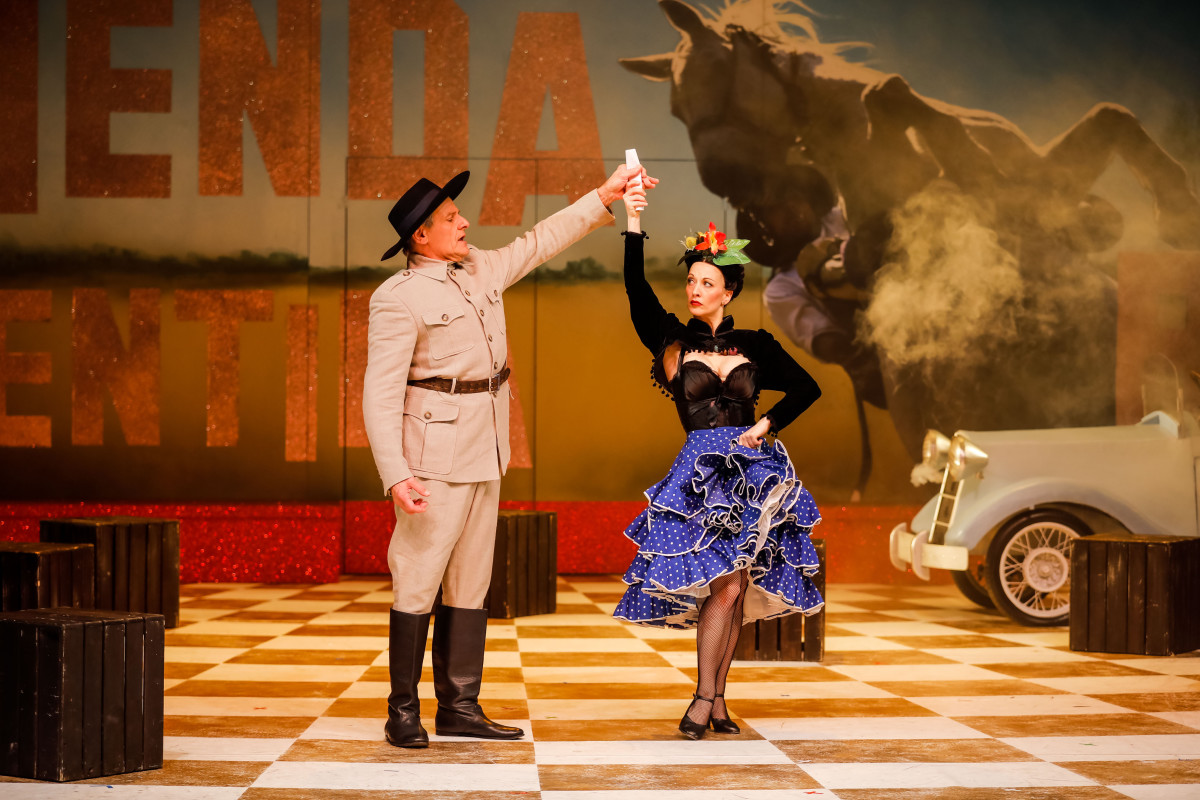 The director of the Baden production (Thomas Enzinger) has ensured that there is never a dull moment: the dialogue is superbly directed with great energy, but above all with attention to detail – every move, however small, has motivation and focus. It has almost been choreographed rather than just directed.  He has been ably assisted by the choreographer, Alexander Grünwald, who has ensured  that not only is every number  a ‘production’ number, but that each song has its own style which is not repeated, whether it is a romantic waltz or an up-tempo Charleston or Foxtrot.

He is lucky to have a superb (I shall run out of superlatives soon!) ballet company of twelve which is used as much as possible: just giving its members time to change costumes! But everyone, principals and chorus, is called upon to dance frequently and well (except for one male member of the chorus who should not have been asked – he is by far the tallest and therefore stands out, even in the back row!) 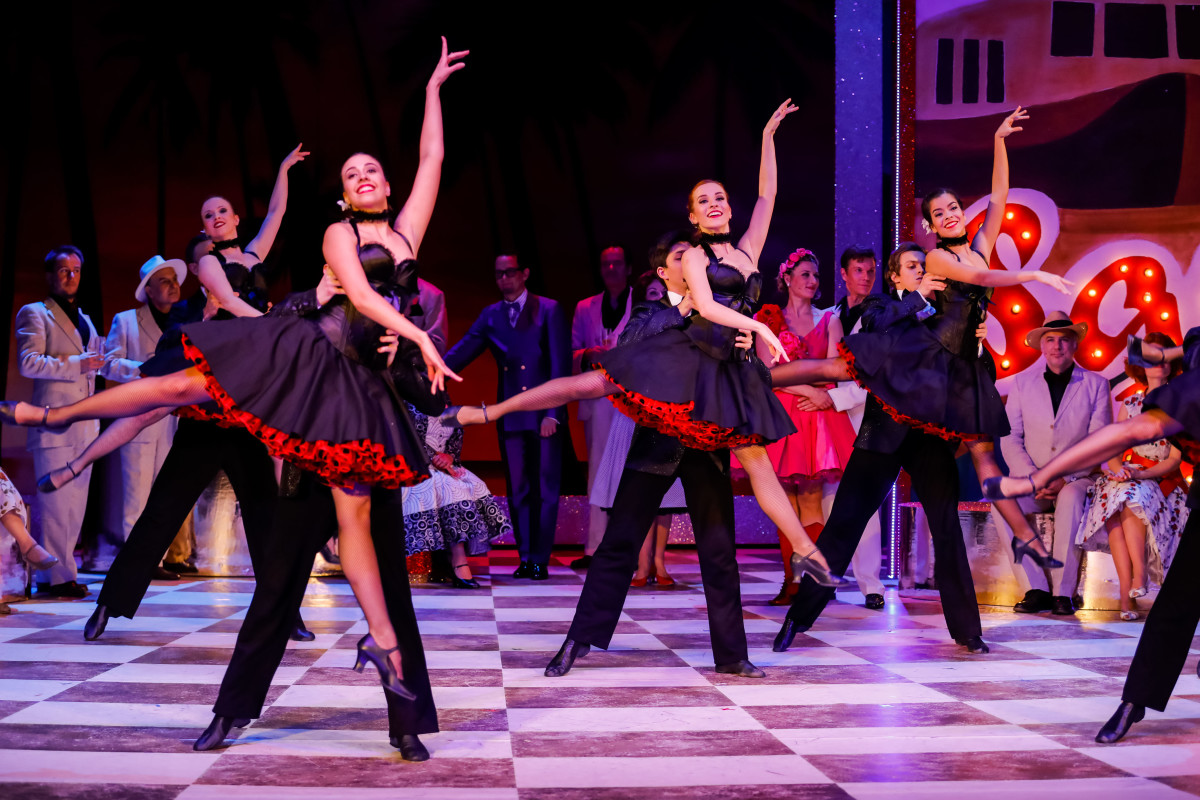 The operetta is at times so frenetic, in Kosky Komische Oper Berlin style, and there is so much to look at and take in, that one wishes that some (all?) of the numbers could be encored! Fear not – two are, deservedly!

Design is by the Magdeburg born Toto. He has wisely designed a composite set which leaves most of the raked stage free for the frequent dance numbers, whilst using screens that glide silently onstage to reduce the acting area for the more intimate scenes. In addition his Italian (palm trees?) and Argentinean painted backdrops are very imaginative, their orange/brown tints blending well with the painted stage floor. Costumes are suitably colorful and imaginative and one does not realize that everything has been achieved on a tight budget .

Both direction and choreography benefit greatly from a very talented group of principals. 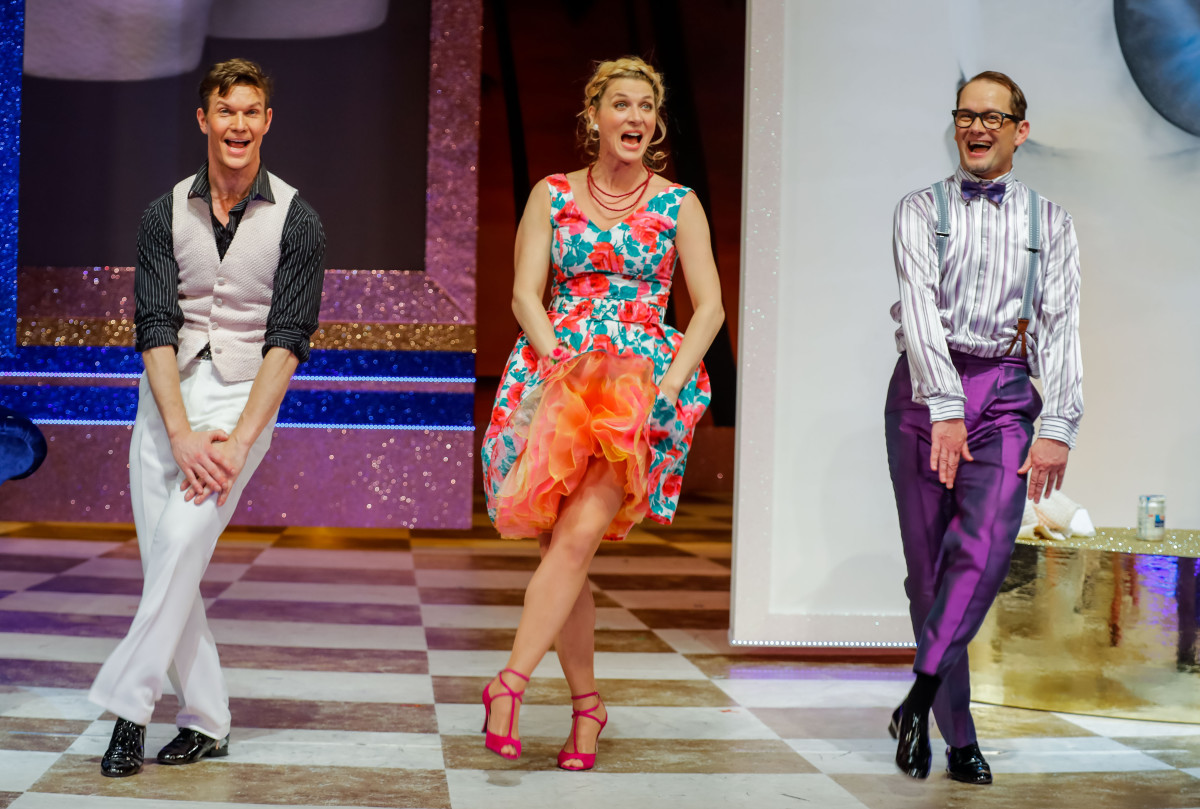 Uli Scherbel, as Josef, reminds one of Fred Astaire. He has the gift of looking relaxed and at ease on stage, as well as appearing to be enjoying his role and those of others. His singing is so ‘casual’ and he makes even the trickiest of tap-dance routines look easy. He is an excellent foil to Caroline Frank as Juliska. Everything she does is full of fun and has pace: like Uli, she knows how to put over her numbers in order to make the most of them. Her vitality  was almost exhausting , especially in ‘Ja das Temp’rament.’

Jevgeni Taruntsov is the painter Armando with an impressive singing voice and Maya Boog a suitably serious Evelyne. Her singing of ‘Frühling in San Remo’ and their singing of ‘Am Rio Negro’ were two of the many highlights in this all too short evening! 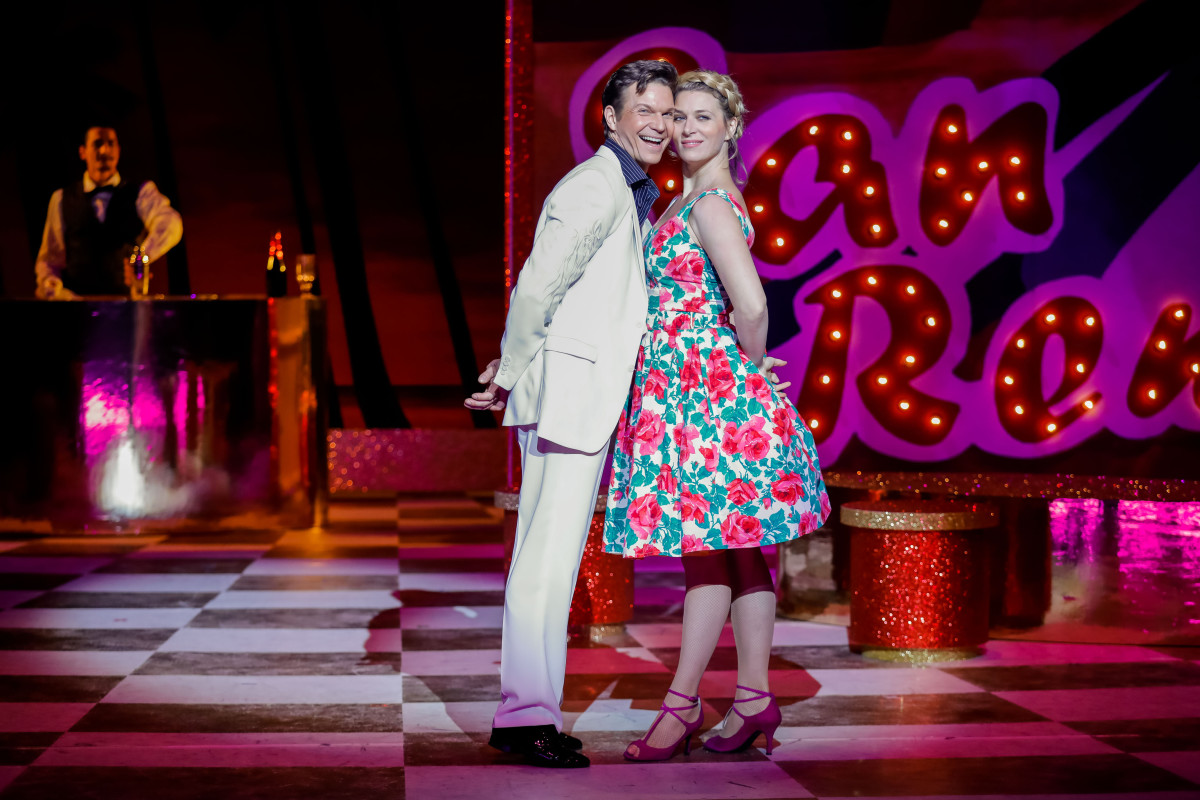 Jens Janke, Franz, in a gorgeous purple suit, was used as a ‘narrator’ to link the scenes – one felt that only in this production could the links be quite as zany, and he was also dragged into most of the dance routines, which he did with great élan.

Books and articles on German operetta of this period are inclined almost to sneer at Maske in Blau and other musical stage works of this period, but this production at Baden proved that Maske in Blau still works its magic. I hope I have conveyed something of my enjoyment of the show: I should love to see it again and thoroughly recommend it for a ‘feel-good’, toe-tapping evening! There are about ten performances left in the run. 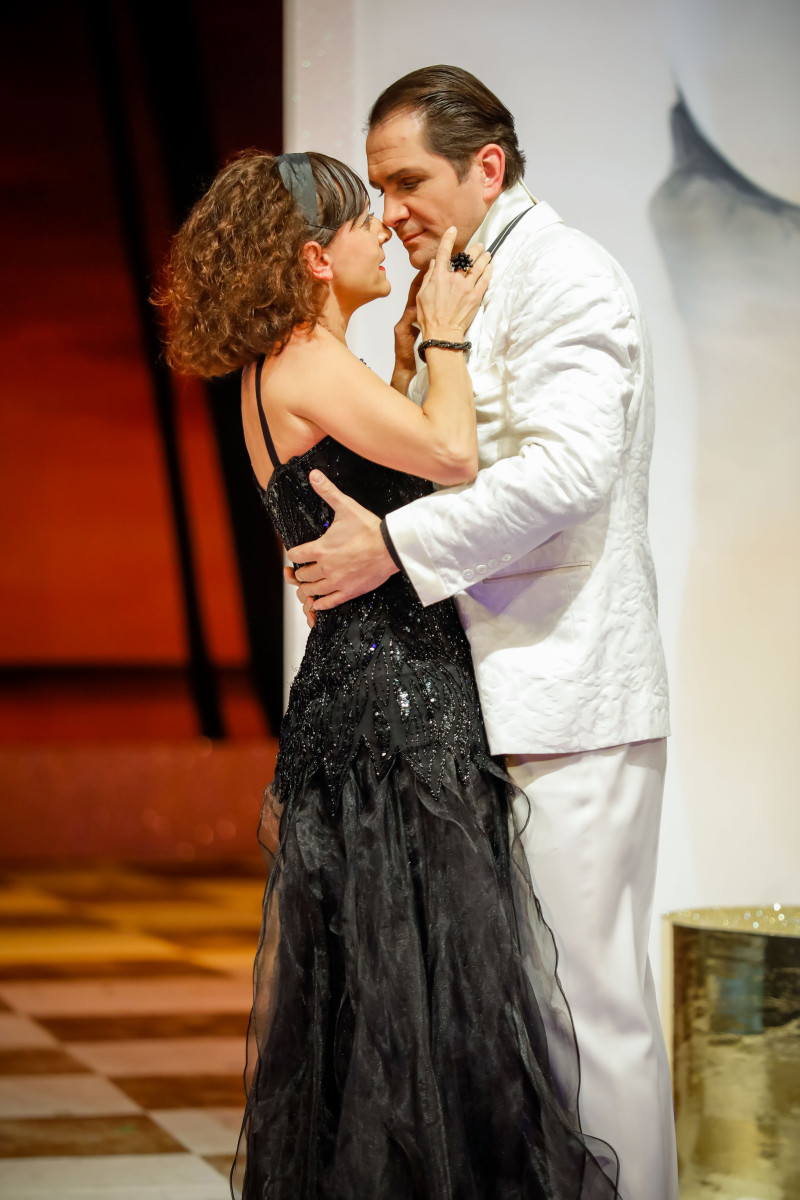 There is no complete recording of Maske in Blau. There is a 38 minute CD of excerpts with Margit Schramm and Rudolf Schock on Eurodisc, as well as a ‘complete’ 1953 Hamburg radio version with Anneliese Rothenberger and Emmy Loose, but neither is really satisfactory, if only because they have been re-orchestrated in the style of the time and sound ‘staid’. Musically neither is anything like complete!