Quadruple threat librettist-composer-lyricist-actor Lin-Manuel Miranda (In the Heights) has conceived an utterly original, ambitious, irresistible new musical inspired by Ron Chernow’s 800-page biography of Alexander Hamilton (1755-1804). While most likely unknown to European readers, Hamilton was a key player in the American revolution alongside George Washington, but also served as our nation’s first Secretary of the Treasury, the architect of the America’s Federal Reserve System, and a key writer of the American Constitution. Hamilton’s face appears on today’s $10 bill. The show’s opening song ‘Alexander Hamilton’ asks “How does a bastard, orphan and son of a whore, and a Scotsman dropped in the middle of a forgotten spot in the Caribbean by providence, impoverished in squalor, grow up to be a hero and a scholar?” This is a review of the original Off-Broadway production. 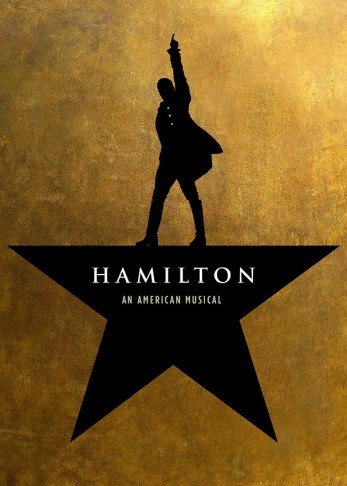 The poster for latter Broadway’s “Hamilton.”

The show’s logo poses the Hamilton’s theme with tabloid style letters superimposed on Alexander Hamilton’s face, “Who lives. Who Dies. Who tells your story.” Hamilton himself proves to be a wondrously complex, fascinating engine for a musical, both headstrong and insecure, outspoken and ambitious. Who better to play this role (“the ten dollar founding father without a father”) than Lin-Manuel Miranda himself? His lifetime friend, rival and ultimate assassin, Aaron Burr (Leslie Odom, Jr.), urges caution and pragmatism, which tension drives the musical from their initial meeting to their famous duel which makes for a thrilling finish. Burr is the consummate strategist, “Don’t let them know what you’re against or what you’re for.” Lest you mistake this musical Hamilton for some tiresome history lesson, author Miranda has re-imagined these young heroes of the American Revolution as impulsive, imperfect, passionate rebels, who speak a youthful 21st century street-smart vernacular, “Hey yo, I’m just like my country, I’m young, scrappy and hungry. And I’m not throwing away my shot.” In a bold, savvy stroke of casting, Miranda and his director Thomas Kail have chosen all actors of color to play Hamilton and Burr, Washington, Thomas Jefferson, John Quincy Adams, James Madison, etc. (usually regarded as ‘old dead white men’). This underscores the notion that these early Americans were in fact immigrants from somewhere else, attempting to create something idealistic, new and democratic. Although Hamilton’s story is necessarily male-dominated, Miranda has etched vibrant roles for his women, the three Schuyler sisters, and Maria Reynolds, Hamilton’s mistress, contributing greatly to the drama.

What is further unexpected about this musical Hamilton is playwright’s Miranda consummate skill as a story-teller, as so much compelling narrative and wit are packed into his dialogue and lyrics. His writing is concise, intelligent fun, never glib. The production races through dozens of historical scenes heady with excitement: early meetings of American Revolutionaries, battles with the British, admonitions from King George III (Brian D’arcy James, succeeded by Jonathan Groff), constitutional quarrels, Hamilton’s courtship with the Schuyler sisters and marriage to Eliza (Phillipa Soo), Washington’s cabinet debates, Hamilton’s scandals with mistress Maria Reynolds, the death of Hamilton’s son, and the final showdown between Hamilton and Burr. Since we know the outcome, its suspense is theatrically remarkable.

In a score where each song flows into the next, it is difficult to single out particular favorites. The most obvious is King George III’s funny reproach of the American rebels, ‘You’ll Be Back,’ with these smug lyrics attached to a Beatles-type tune: “I’ll love you to my dying days, So don’t throw away this thing we had. Cuz when push comes to shove, I will kill your friends and family, to remind you of my love.” Or the hurt and bertrayal felt by Hamilton’s wife Eliza in ‘Burn.’ Or Aaron Burr’s desperate anger to be a part of it all in ‘The Room Where It Happened.’ Or the poignant closing ‘The World Was Wide Enough,’ which questions whether the world was big enough for the egos of both Hamilton and Burr.

Hamilton’s cast is outstanding in their universal ability to evoke credible figures of 240 years ago without the typical starch or historical clichés. As an ensemble of principals they possess a giddy sense of fun, be it Miranda and Odom as Hamilton and Burr, Daveed Diggs as Thomas Jefferson (who rationalizes owning slaves), Christopher Jackson as George Washington (surprisingly human), or Okieriete Onaodowan as a snobbish James Madison. Thomas Kail’s direction maintains a firm grasp and vivid focus throughout, as the turntable and wooden scaffold set permits the story to leap from point to point.

In a perfect evening, it is difficult to spot any weaknesses, which the creators have promised to tighten for Hamilton’s transfer from Off-Broadway to Broadway this summer. I offer these observations: (1) there is perhaps too much choreography from Andy Blankenbuehler which calls too much attention to itself for its own sake. (2) Act 2 does not quite match the thrill of Act 1. (3) I wonder whether Hamilton’s story will have much appeal outside the USA. (4) Miranda’s performance as Hamilton is somewhat self-effacing for the titular figure who drives the narrative. At present it is difficult to separate Miranda the author from Miranda as Alexander Hamilton; a greater dynamism might easily be mistaken for hubris or arrogance. No doubt Hamilton will run long enough to permit other actors in the role. Such are the joys of this singular, memorable musical, which will no doubt endure for the ages.