Before the dawn of the phonographic era and before iTunes came along you had to either go to the theater or concert hall to hear music – or perform it yourself at home, e.g. at your own piano. Sometimes you could also hear popular melodies played at municipal bandstands. Another way hit tunes made the rounds in the 19th and early 20th century were barrel organs or mechanical pianos of all sorts. Many of Offenbach’s pop songs became known to the masses through such devices. Now, Offenbach enthusiast Jérôme Collomb has released a double disc called Hommage Mécanique which contains 46 tracks featuring Offenbach music played on historic 27 note organs, but in new arrangements by him, composed in the style of the Métra / Strauss tradition. But there are also various historic versions from the 1890s, contained on original ‘playing cards.’ The titles range from Orphée aux enfers to La chatte metamorphose en femme (1858) and La Diva (1869), but they also include La Marocaine (1879) and music from other less known shows. 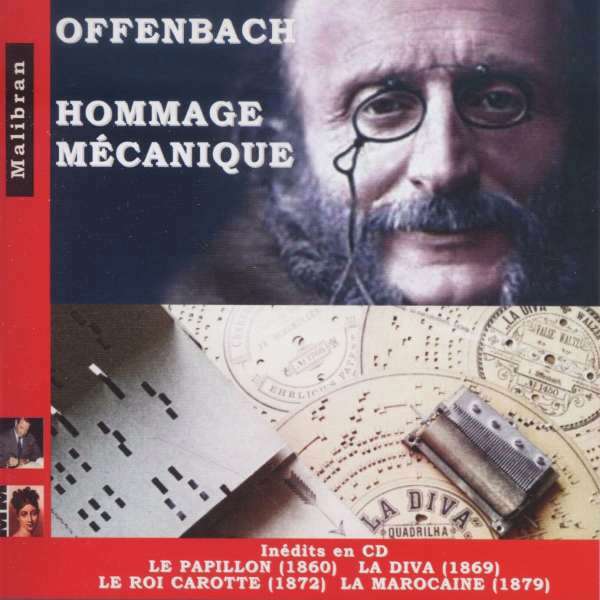 The cover of the CD “Offenbach: Hommage Mécanique” on the Malibran label.

Mr. Collomb has been an Offenbach lover for almost 20 years (he is now 33 years old) and started collecting original prints of vocal scores (including variants of the time such as for Les Contes d’Hoffmann, Les Braconniers and others), illustrated dance scores (quadrilles, polkas, valses), original photos from actors from the time of Offenbach, opera costumes, press articles, and illustrations of the time, libretti, melodies, cello music, and original dance music.

With this material he is preparing an Offenbach exhibition at Dijon, for the Festival de Musique Mécanique d’Europe, which opens today. He also owns various instruments on which he can play these arrangements – one of the instruments is a Polyphon 54 theet, another the 27 notes Street Organ “Pauliphonic,” then there is a 24 keys Ariston, and a 24 keys Organina Odin / Thibouville type. These are the instruments you hear on this disc. Some of the original arrangements, from around 1890, are from La Chanson de Fortunio, La Belle Hélène, La Diva, the waltz and quadrille from La Jolie Parfumeuse, and La Fille du tambour-major. Also from the 1890s are the arrangements from Orphée aux enfers, Barbe-Bleue, La Grande-Duchesse de Gérolstein, plus La Vie parisienne (based on a original Polyphon disc). 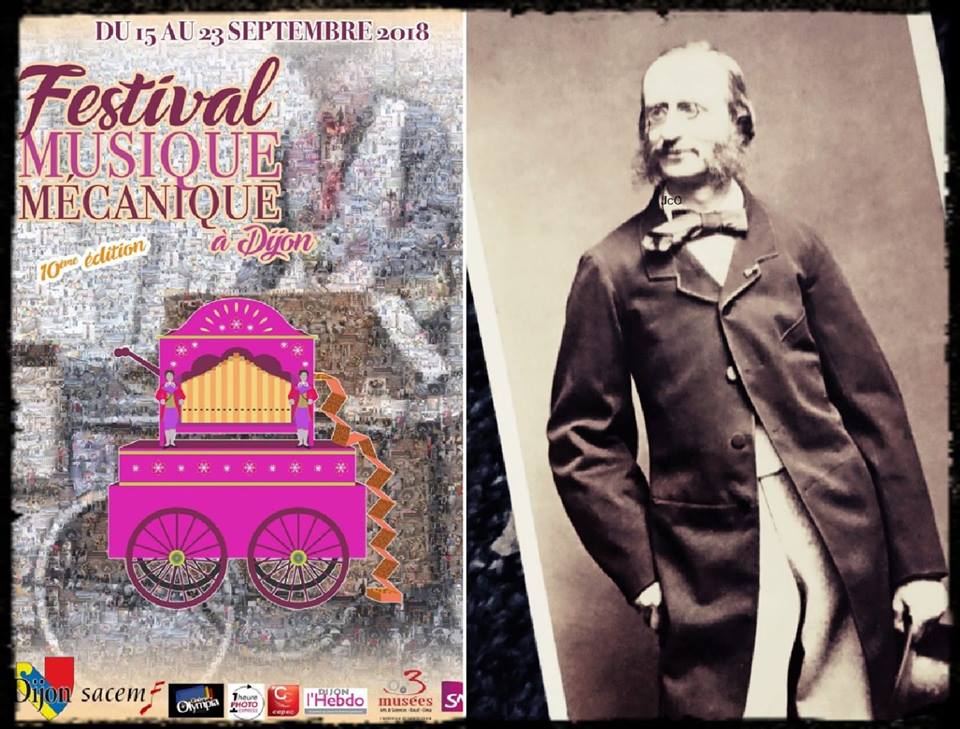 Poster for the 2018 Festival de Musique Mécanique in Dijon.

Truth be told, it’s not the greatest of musical joys and obviously not the same as hearing Offenbach’s music performed by a real orchestra, however large or small. Even if these arrangements are rather ‘orchestral’ on style, certainly the modern arrangements by Mr. Collomb. It’s also a very different effect than hearing a pianist performing this music on a regular piano. But, that said, it is fascinating to listen to the many rare titles such as the polka and ‘Couplets du Canard’ from L’ile de Tulipatan (1868). There are also 13 newly arranged numbers from the ballet Le papillon (1860). And, as my personal favorite, the ‘Marche marocaine’ and ‘Polka des Janissaires’ from the aforementioned La Marocaine. There’s also the ‘Fatime valse’ and ‘Un bal chez Soliman’ from that show. It’s great that Mr. Collomb decided to include so many lesser known titles in his own arrangements, instead of sticking just to the famous hits.

It’s all a very different way of hearing Offenbach, it’s also a very novel way of hearing his music, you might even feel like you are hearing him in a unique historic way for the first time in over a century of recorded Offenbach and/or operetta music. Which is only partly true. Because, in many cases, these are modern versions: a ‘mechanical’ approach to Offenbach that could be seen in the context of our digital age. Especially interesting is the fact that you cannot really hear what’s ‘old’ and what is ‘new,’ the lines are blurry and in a way it all becomes ‘one’ in the end, past and present melting into a single Offenbach experience. 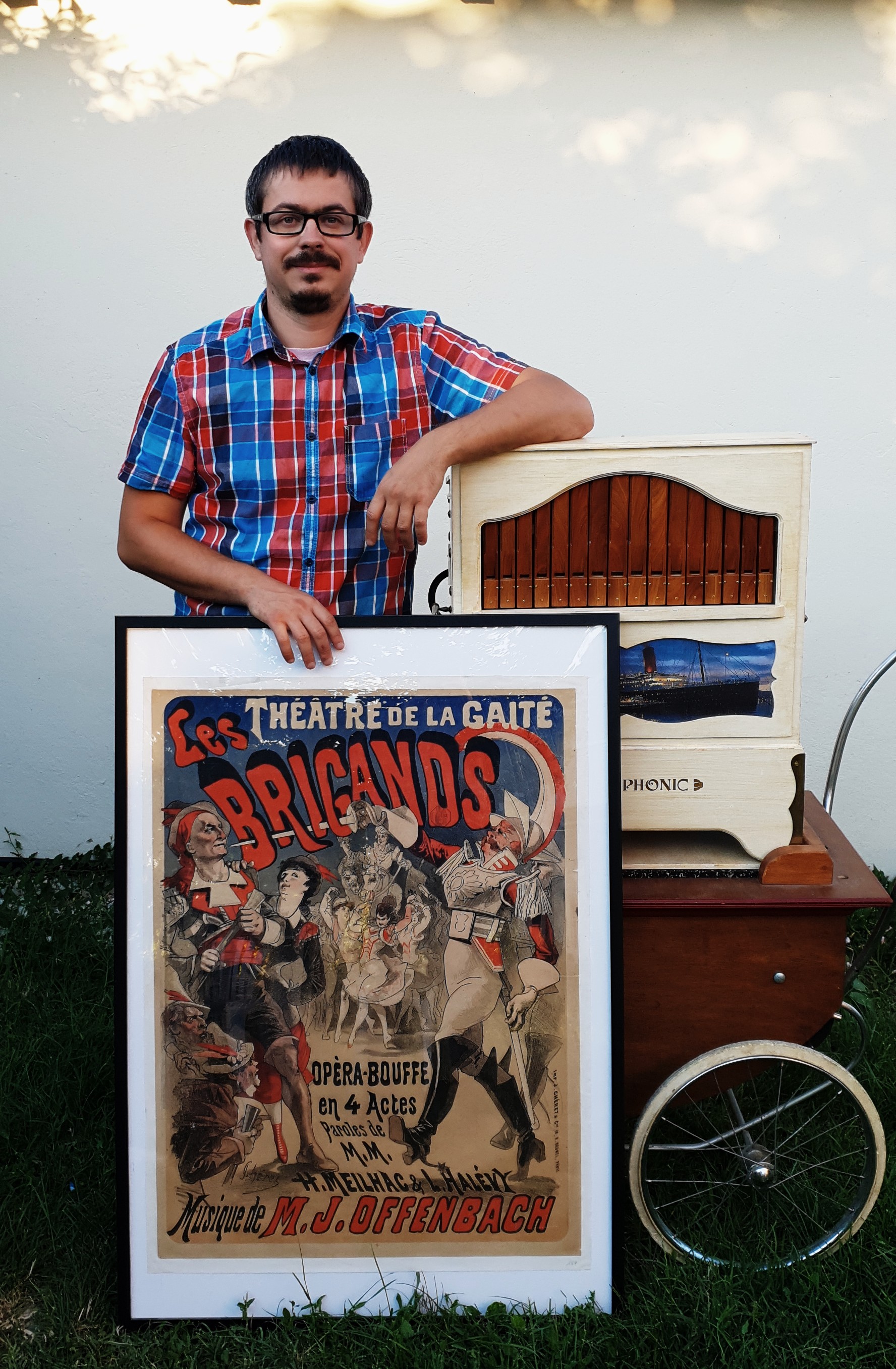 The illustrated booklet is mostly in French when it comes to a detailed description of all the shows the music is taken from. But the general introduction, also by Mr. Collomb, is translated into English, and it is very helpful in understanding what these recordings are all about.

Obviously, there can never be too much Offenbach around, so this latest addition to the discography is more than welcome. And hopefully, there will soon be a bigger exhibition of Offenbach featuring material from Mr. Collomb’s collection and that from other archives. We are still waiting for news of a grand show somewhere in 2019, for the 200th birthday of Jacques Offenbach.