In early 2015, the Komische Oper presented their very first Operetta Symposium, dealing with the “kinky” side of the genre (among other things.) One of the shows referred to in that context, again and again, was Offenbach’s La belle Hélène (1864). In combination with this opéra bouffe, Emil Zola’s novel Nana (1880) was cited over and over again too, especially the chapter in which Zola describes how his heroine appears in the nude. Making male audience members drool with lust. How could such a “drooling” performance sound, today? And: Is there a recording of Hélène that comes close to such ideals? 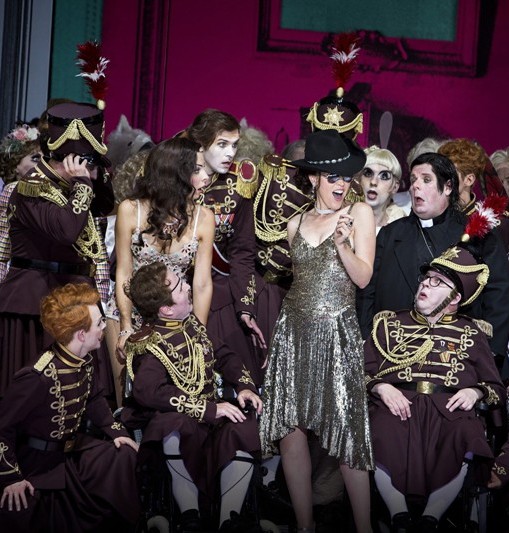 Obviously, there are a great many recordings of Offenbach’s once scandalous sex farce about matrimonial infidelity and desperate housewives. Most of them use opera singers such as Jessye Norman, Felicity Lott and Vesselina Kasarova in modern times, or Linda Felder, Jane Rhodes, Anna Moffo and Anneliese Rothenberger in more ‘vintage’ versions. As gloriously as many of them sing, none of them can be described as a “sex goddess” even remotely reminiscent of that Nana chapter everyone loved to quote from at the symposium. Surely, Offenbach’s original star, the notorious courtesan Hortense Schneider, did not look or sound like that! 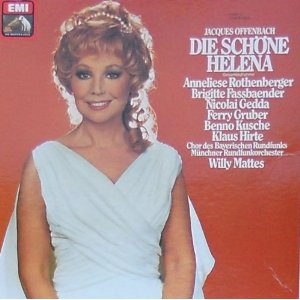 The cover for the EMI recording of “Die schöne Helena” with Anneliese Rothenberger.

In the context of the symposium, Stefan Frey talked about famed opera diva Claire Dux who appeared as Kalman’s Das Hollandweibchen at the Metropol Theater Berlin in 1920. Billed as a big star attraction, Miss Dux disappointed audiences and critics alike with her cross-over adventure into operetta land. One critic noted that no one could sing Kalman’s music with more beautiful tones and more musical accuracy than Miss Dux; but he also mentioned that any soubrette, no matter how sloppy her singing and acting, would have done the role more justice than the opera star, who simply had no idea what performing in an operetta meant. After all, this genre is not just about accurate and beautiful singing. Far from it.

The same argument could be made for Offenbach’s infamous heroine. Sadly, not even the most ardent advocates of a “historically informed performance practice” (John Eliot Gardiner, Nikolaus Harnoncourt, Marc Minkowski) have opted for singers who might remind audiences today of such sloppy, yet gripping operetta singing, with the right amount of sex appeal. 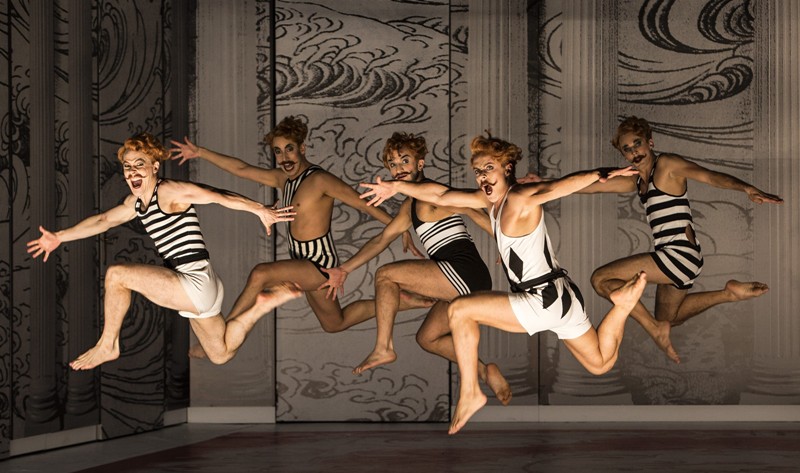 So is there no recording, whatsoever, one can turn to in order to hear a “different” kind of Hélène? Well, there is at least one that stands out from the crowd. And that is the 1948 recording featuring Fanely Revoil (1906-1999). She was an opera singer and a member of the Opéra Comique for many years, but she was obviously brought up with a rather different approach to opéra bouffe. Her interpretation of the lusty Queen of Sparta is not about well-rounded tones, it’s about a juicy and above all funny delivery of the text. Her big solos are a joy to hear because you never have to worry that she is mistaking Helena’s “Amour divine” for Tosca’s “Vissi d’arte” or anything of the sort. She must be the cheekiest Hélène in the Offenbach discography, and she deserves to be remembered.

At her side, there is the equally amazing Marcelle Sansonetti as Oreste. She sounds like she’s stepped straight out of a Toulouse Lautrec painting, singing with the flimsiest of voices, but with the naughtiest of attitudes. In other words, she is the perfect Offenbach interpreter and a great counterpart to Miss Revoil.

As for the rest, you hear real character singers in each and every role, conducted by Jules Gressier. Tenor Louis Arnoult as Paris sings with a light and lilting voice, the crazy Ménélas of Maurice Porterat is as loony as he should be, and the rest is equally mad-cap.

Where necessary, the Orchestre Radio-Lyrique of Paris produces rousing and pompous sounds, but they are not afraid to bounce into some hilarious off-key sequences too, if that serves the plot. (Which it does!)

If I had to choose my desert island version of Belle Hélène, this would be the one. Because every number is presented tongue-in-cheek, and the drive Mr. Gressier produces is ravishing, even is the sound quality is not the best. (Who cares?)

Talking about naughty, loony and desert islands: one of the foreign visitors at the symposium reminded me that much of the Offenbach music for Helena was re-used in 1961 by E. Y. Harburg for the musical The Happiest Girl in the World, an adaptation of Aristophanes’ Lysistrata. (Yes, the other sex romp from Antiquity.) 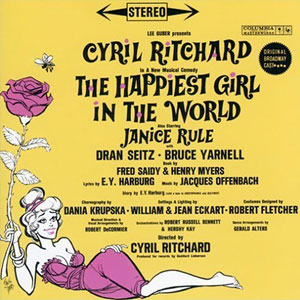 The LP cover of “The Happiest Girl in the World.”

Hearing the Broadway cast recording with Cyril Richards & Co. – to the amazing orchestrations of Robert Russell Bennett and Hershy Kay – is like rediscovering the original potential of Offenbach’s show. The lyrics for the new American version are dazzling, to say the very least, and so frivolous, that it’s hard to believe something like this could have been written and produced in the early 1960s. (Maybe that’s why the show flopped, back then.)

It is a musical absolutely worth rediscovering too. Luckily, there is a stand-out recording that will make you smile for days afterwards (guaranteed!) Together with Fanely Revoil invoking the Greek Gods, this is a double treat that should be obligatory listening material for anyone whose interest was tickled by the talks on bodies and gender, brothels and lust during the symposium at the Komische. And who knows, maybe Barrie Kosky will tackle The Happiest Girl in the World one day too?