Down to my last two days in Berlin. The Komische Oper was hosting a three-day symposium on operetta, the last day of which was held partly in English, which I attended. Subjects were gender and bodies, then form and reference. Speakers came from all over the world, including the USA, UK and Ireland. 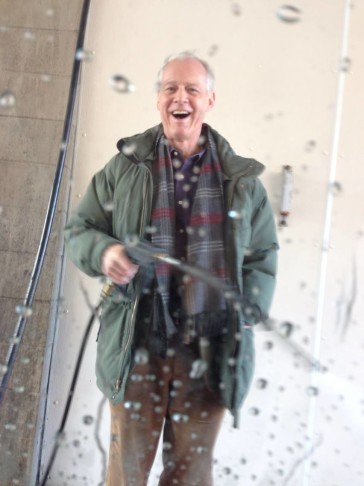 My friend Kevin Clarke had urged wisely that I try to see Clivia again on Monday night, after the last day of the symposium. It was sold out, but he generously gave me his ticket, while he sat upstairs in the second ring. Since my previous visit, Kevin had explained this production’s back story, namely its three stars Christoph Marti (in drag) as movie star Clivia, Tobias Bonn as her Latin lover Juan Damigo, and Andreja Schneider as Juan’s cousin Yola, commander of the Amazons, are a long-established music and comedy trio known as Geschwister Pfister. Check out their website geschwister-pfister.de to view their 21-year repertoire, 12 CDs, 5 DVDs etc., much of which translates easily into English. 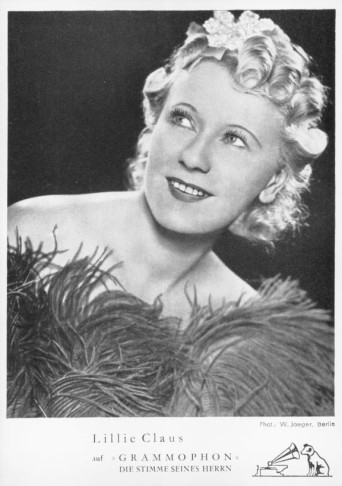 It’s nonetheless an amazing leap to have a Komische Oper production tailored to their talents, since Lillie Claus premiered Clivia as a lyric soprano to great acclaim and would later become composer Nico Dostal’s wife. And the best known recording from the 1950s features well-know soprano Anneliese Rothenberger; Margit Schramm on LP and CD, 1971; Renate Holm, Peter Minich on a 1979 LP. Christoph Marti’s voice is more that of a mezzo soprano, more Zarah Leander or Lauren Bacall, so Clivia’s songs have been moved down a bit.

In real life Christoph/Tobias have also been a couple for 30 years. I was curious to watch their on-stage chemistry. Especially since I’d met Clivia’s leading man Tobias Bonn at the opening night of Eine Frau, die weiß was sie will; he was loads of fun to talk to and spoke great English. Clivia is still a guilty pleasure, and just as much fun on a second viewing and its inane plot made even better sense. And those tunes, much more memorable on a second hearing, have been stuck in my brain ever since.

With Clivia Gray sung as a mezzo instead of a soprano, “Clivia” now plays more as a brash 1940s musical comedy than a 1930s operetta.

Since my Hotel Melia was fully booked for the final night of my stay, I moved over to Kevin Clarke’s apartment, which is great as it’s five minutes’ drive to Tegel Airport. Kevin was on deadline to write several articles, so for my last night alone I chose to attend the revival of that German phenomenon Linie 1 at its home the Grips Theater in Hansaplatz; it first opened 30 April 1986 before the Berlin Wall came down. I’d seen and totally forgotten its English language premiere at Pepsico’s Summerfare Festival at Purchase in 1988. But according to Kevin, nearly every German knows the tunes, loves the eccentric cast of 11 who mostly double and triple in a revue-ish story of the locals who ride Berlin’s famous U1 subway line. If they don’t know the show they know the movie, and the Grips Theater produced a sequel Linie 2 in 2009. I’d bought commercial DVDs to both the stage versions of Linie 1 and 2, and the film DVD to Linie 1.

I’d anticipated no trouble getting a single, but got the last available unreserved seat to a packed house, the youngest crowd I’d seen for any show, many too young to have known West Berlin and the Kurfürstendamm of 1986. It has not been updated with cell phones, costumes etc. So this show now plays as nostalgia, for the scruffy, crummy West Berlin which now looks as quaint as we would look at NYC in the 1970s. Its central figure is simply “Mädchen,” a country girl trying to find her ex-boyfriend Johnny in the big bad city.

Unlike all my other theatre excursions, there was no English language assist for this show which ran an endless 3:20 with one interval.

I had to struggle somewhat to stay interested in the obvious story, and I cared little for the 1980s rock score. I bought the Linie 1 fan book, which details the show’s origins, lyrics, cast changes up to 2009, song lyrics, and its travels around Germany (reset locally when in Hamburg), and the world to Dublin, London, Purchase (NY), Turin, Vienna, Paris, Amsterdam, Jersualem, Brisbane/Melbourne, Scandinavia, Bombay, Seoul, etc. (Libretto available in German and English.)

So I was more than a little curious to re-discover precisely what is this German musical phenomenon.

Famous is the Act 2 opener in which four elderly war widows from Wilmersdorf in black fur coats (played by 4 men in drag) excoriate younger kids for their bad behavior; recognizable archetypes then, they’ve now passed into history. I was amused to see the rock band No Ticket were made up of five old rock&rollers in their 60s and 70s. But I’d have to say I endured the evening as musical theatre education, a curiosity and with little pleasure.

Wednesday morning Kevin’s father Michael picked us up at 8am and dropped me at Tegel Airport for the return flight to Newark via Amsterdam. All in all, it was a great trip, with profound thanks to Kevin for his generous assistance, guidance and good company, to the Komische Oper which offered me five nights of pure musical theatre ecstasy, and the Hotel Melia whose great location afforded comfort and easy access to all Berlin. 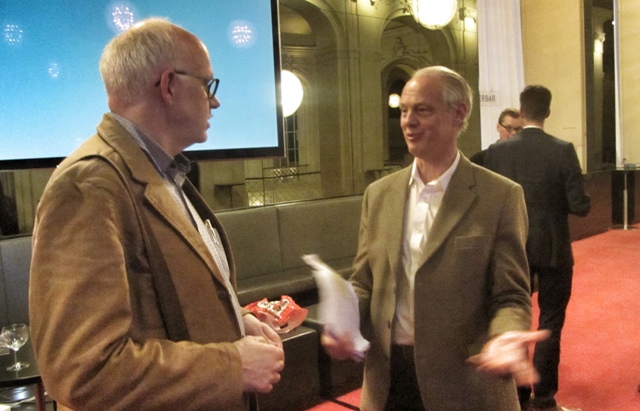 Richard Norton (r) talking to researcher Thomas Krebs from Switzerland at the Operetta Symposium of the Komische Oper.