It’s rare, these days, to encounter such personal enthusiasm for operetta history as is demonstrated in the picturesque town of Neustrelitz with an awe-inspiring Erik Charell exhibition. You’ll recall that Neustrelitz also has a local summer festival devoted to operetta. In its 16th edition, they are showing Im weißen Rössl in the park of the former royal castle. In a very unimaginative production by Wolfgang Lachnitt, that is – stylistically – stuck in the 1970s, but without any feeling for vintage fun. Across the street from the festival is the Schlossgarten Hotel. Its owner, Jürgen Haase, was so enthralled by the story of Erik Charell – after having seen the exhibition Glitter and Be Gay at the Schwules Museum* in Berlin, six years ago – that he decided to put together his own exhibition and show it in the basement of his hotel. As a special treat for his guests, but also as a treat for anyone coming to Neustrelitz for the performances. You can visit the exhibition prior to the show; the entry is free of charge. 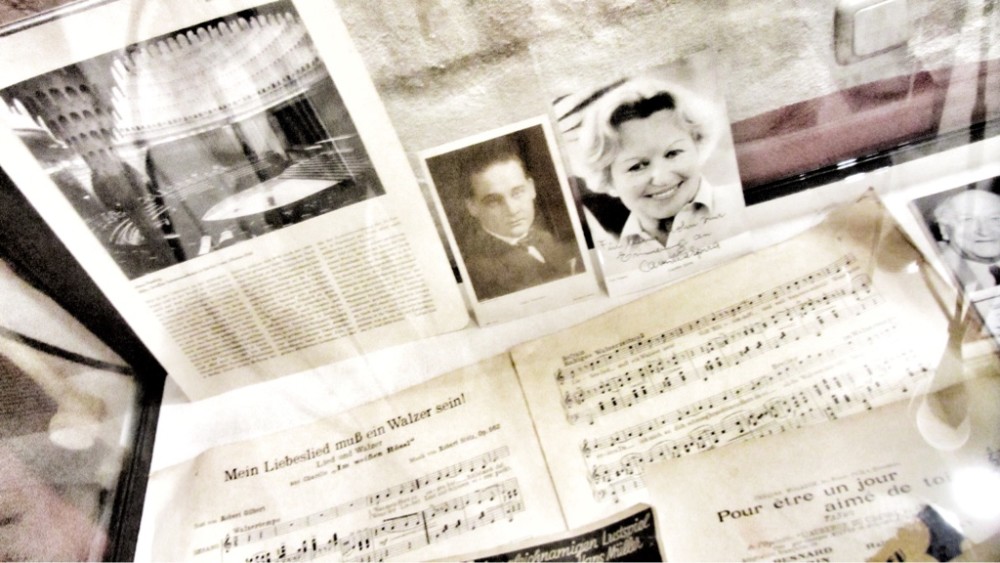 Objects on display at the Erik Charell exhibition in Neustrelitz, Schlossgarten Hotel: showing Max Hansen and Camilla Spira (the latter in old age).

If you are not familiar with the Charell story, the sheer amount of material and the non-chronological way it is presented might confuse you a little, at first. But once you start reading the many little descriptions, and once you start noticing the enormous amounts of so far unexhibited material, you will gasp. Well, I did. And I am the person who curated the Charell exhibition in Berlin. I had given Mr. Haase photos and digital copies of the material I had gathered back in 2010.

But the hotel director wasn’t content to just print that out, and leave it at that. No, he started hunting for material himself.

He went through every eBay offer he found, searched in every second hand online book store, and even dug into archives at the Staatsbibliothek. 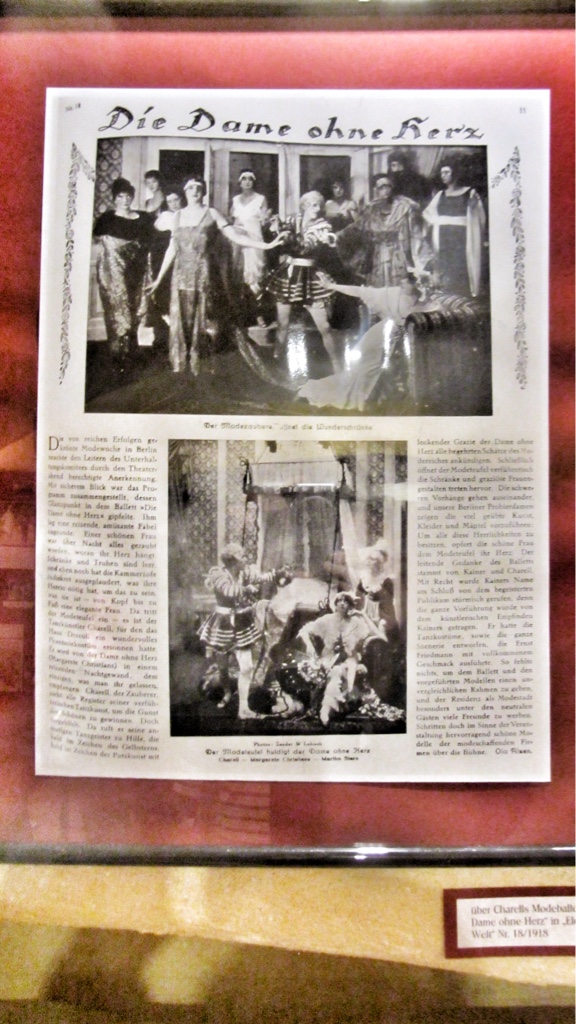 A page from a 1910s fashion magazine, with photos of the Charell Ballet.

What he found is astounding. There are postcards of Rössl restaurants in Belgium and elsewhere, there are original editions of the 1930s “porn” version of Rössl (“Klassiker der erotischen Weltliteratur”), there are images of the Große Schauspielhaus where Rössl was first presented in all stages of its history. And there are documents of the Rössl performance history in East Germany: the famous 1980s production at the Metropoltheater Berlin, staged with the dancers of the Friedrichstadtpalast. But also the 1960s Metropol version. Mr. Haase got the souvenir brochure and production photos from the old Metropol Theater dramaturg and from singers who participated in (both of these) productions. 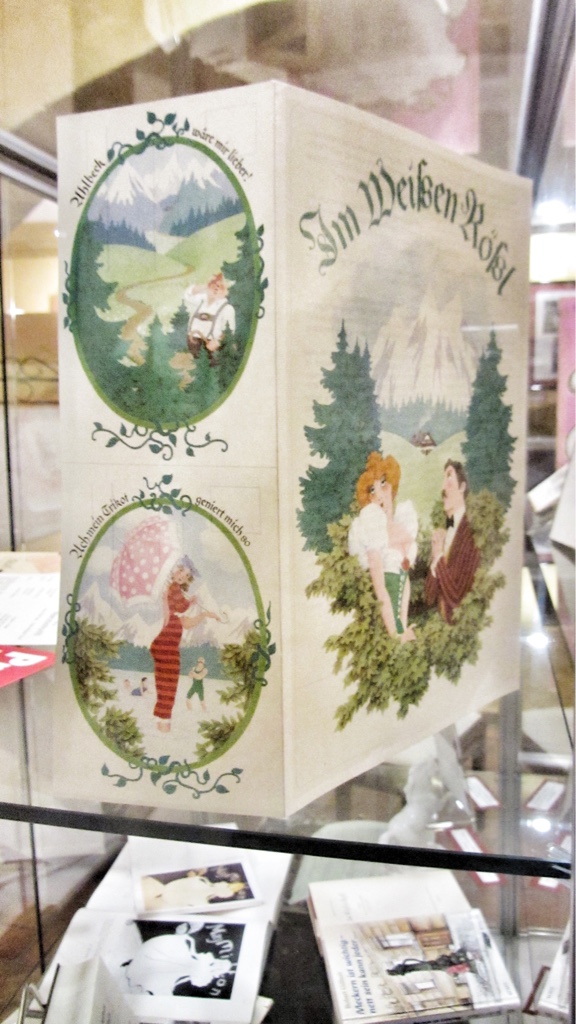 Program for the 1980s “Rössl” production at the Metropol Theater, East-Berlin.

But what really took my breath away were the pages from a fashion magazine in which Erik Charell can be seen as a dancer. When we did our Berlin exhibition, we had a few portraits of the young Charell, and an advertisement for the Charell Ballet. But in this fashion magazine of the 1910s you see full scenes – in costume – with Charell at the center and with his colleagues. Accompanied by expansive articles. This is a real find, and a must-see for anyone interested in Charell’s career.

Copy of Friedrich Zanner’s driver’s license, on display at the Charell exhibition in Neustrelitz. (Photo: Archiv of the Operetta Research Center)

Also exhibited for the first time in Neustrelitz are the various private photos that the widow of Charell’s long-term partner Friedrich Zanner gave me, after she got in touch with me, having seen the Schwule Museum* exhibition. There are images of Charell on the set of the Rössl film in 1952, there are images of him at the Cannes film festival, there are images of his famous Munich apartment in the 1970s, showing all of his art collection saved from Berlin and the Nazis. And there are multiple images of Mr. Zanner, who had been a kind of enigma for a long time. Seeing this strapping young man, one understands why the homosexual Charell offered the auto mechanic a job as private assistant and took him to America in the 1930s. They stayed close till the end, and Zanner was one of the heirs of the Charell estate. 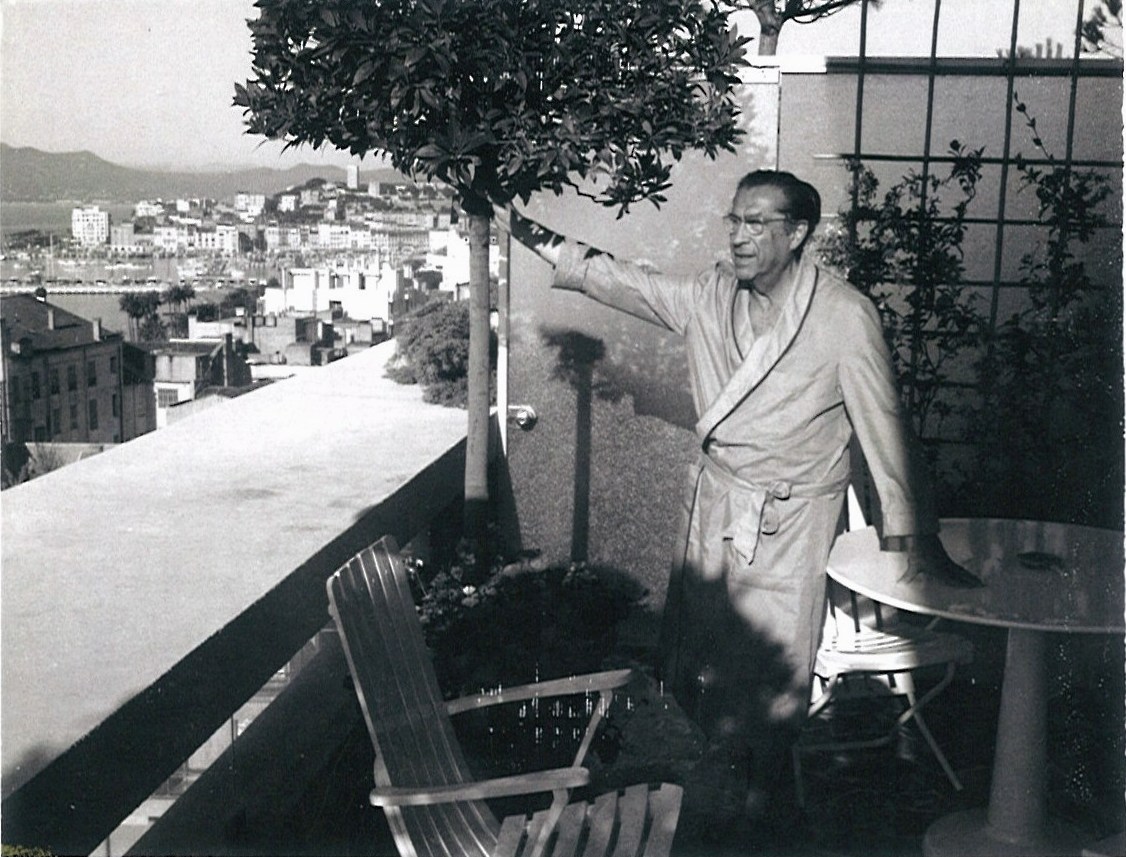 Erik Charell at the Cannes film festival, in the 1950s. (Photo: Archiv of the Operetta Research Center)

You can spend an hour at least looking at all the wonders on display at the Schlossgarten Hotel. And having seen pictures of the various famed Rössl productions of the past, it’s a bit of a let-down to see the 2016 version at the Festspiele in Schlossgarten Neustrelitz. Not because the sets there are unattractive. On the contrary, Bernd Franke has created a highly attractive open-air stage. Most of the colorful costumes by Stephan Stanisic are equally attractive. (As are the dancers, by the way.) But the staging – based on the standard 1950s version of the show – has no feeling for timing and director Lachnitt is (apparently) not interested in interaction between the characters. They kind of walk through their parts, singing in a neutral way, and that’s it.

Only Bernd Könnes as Giesecke brings personal energy to the production, and joy in playing the grumbling Berlin textile producer. And Mario Thomann as the Emperor is believably solemn. And amusing.

Mention should also go to Verena Schuster as Kathi who delivers some fabulous yodeling moments! 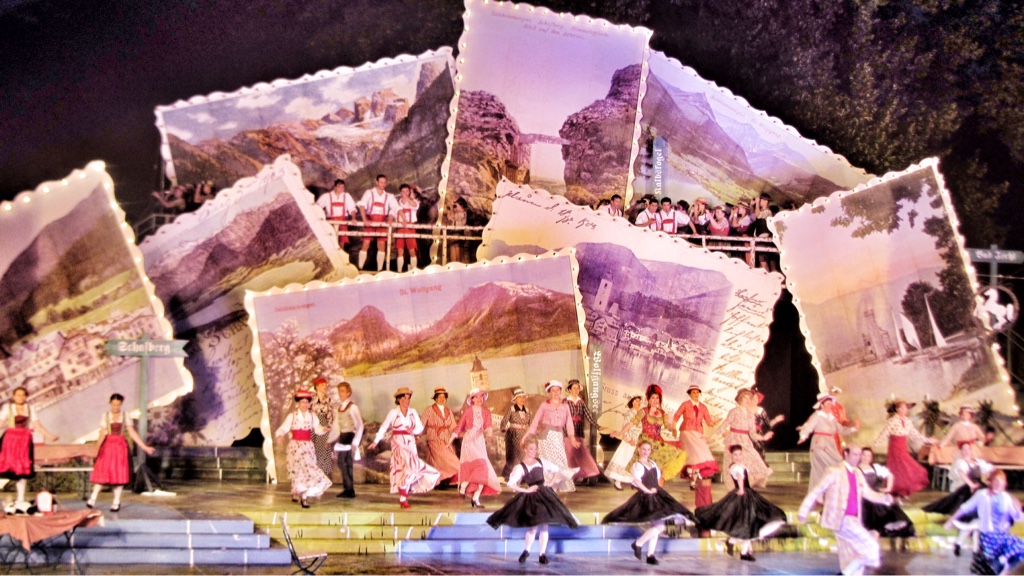 A scene from the 2016 production of “Im weißen Rössl” at the Neustrelitz Schlossgarten festival. (Photo: Kevin Clarke)

Still, the show works. And the audience laughs at all the right places. Which only proves, once more, how brilliant Hans Müller’s original dialogue is and how fool proof Charell constructed the show. Not even a Wolfgang Lachnitt can destroy the Rössl magic in a production that cuts out large chunks of this dialogue, but offers many of the 1950s dance scenes. The inclusion of so many dance numbers (choreographed in a slightly bizarre classical ballet way by Thomas Vollmer) makes the performance last for 3 ½ hours. With better timing, you could have had all this dancing and the full dialogue. But hey, maybe one shouldn’t expect miracles in Neustrelitz. 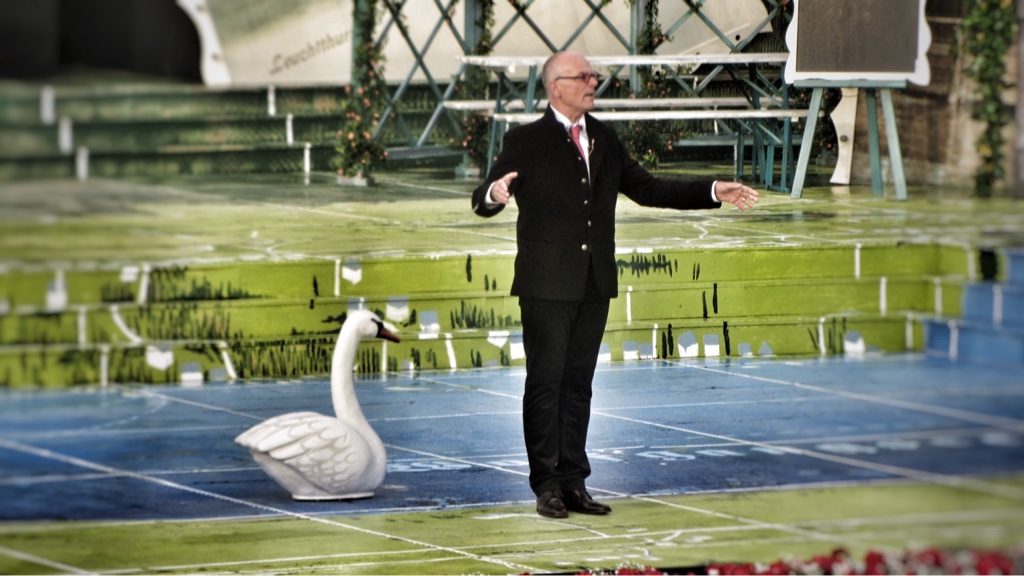 There is a second exhibition up in the festival area, with photos of the big stops of Charell’s Rössl: Berlin, London, New York, the film version (1952 and 1960). It’s material the festival got from the Operetta Research Center, though – strangely enough – there is no credit to be found anywhere; even though all the ORCA texts on Rössl have been recycled too. But I am not complaining; instead I’m happy to see that so much attention to the historical background of the show has been paid. (It might have helped if Mr. Lachnitt had looked at the historic Rössl material too.) 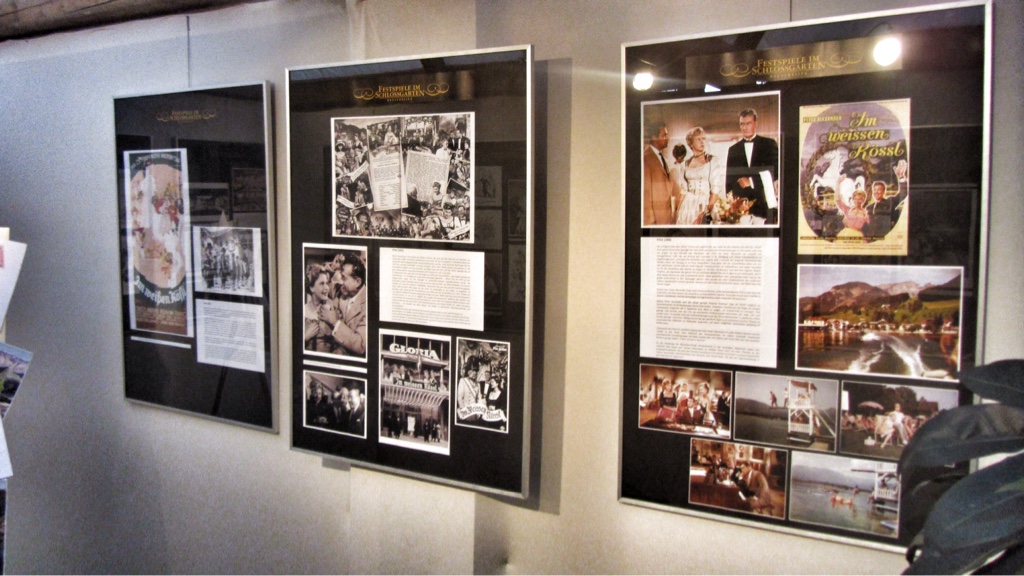 All in all, it’s well worth visiting this White Horse Inn in Neustrelitz. Compared with various total deconstructions I’ve seen lately (Bremen for example, with the incomparable Desiree Nick), this is actually an enjoyable performance. The town of Neustrelitz is a marvel, only 1 hour away from Berlin by train. And the exhibition at the Schlossgarten Hotel is a real eye-opener. Since the whole hotel team is also remarkably friendly, it was a joy spending the entire night and most of the next day talking with them about operetta, the history of Neustrelitz and its festival, and eat Frankfurter Kranz from the local bakery. 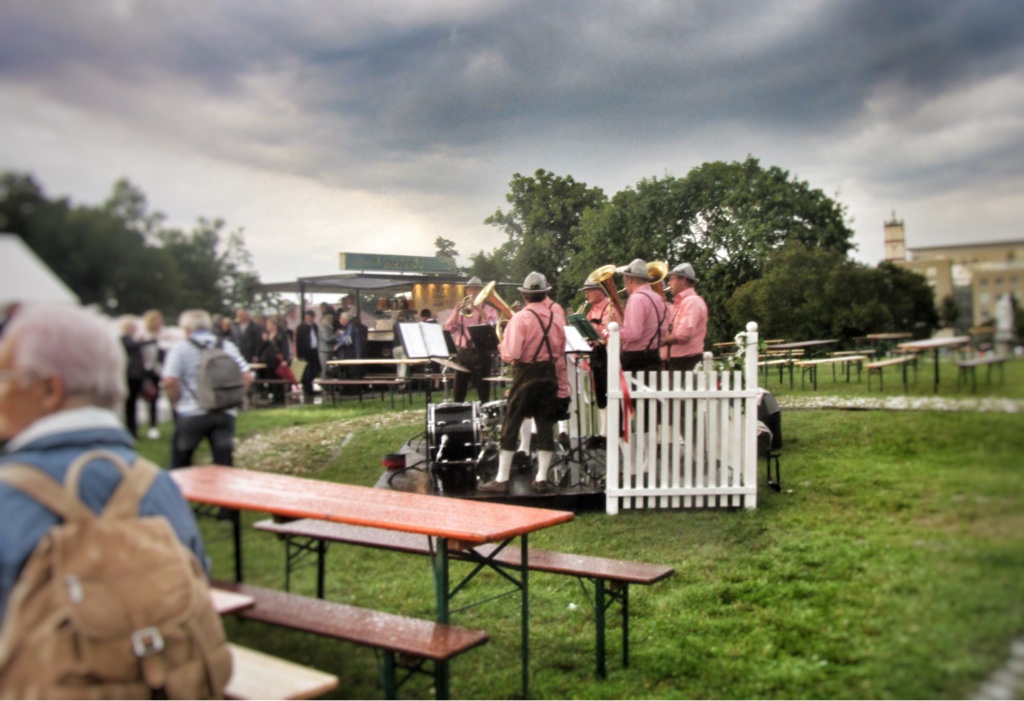 The brass band playing during the interval of “Im weißen Rössl” in Neustrelitz. (Photo: Kevin Clarke)

If you visit the hotel, make sure you get Mr. Haase to take you through the exhibition personally. He’s glad to do it; and then you can ask him where he got all this material from. Some of the “In Search of the authentic Weiße Rössl” stories are too too wonderful! 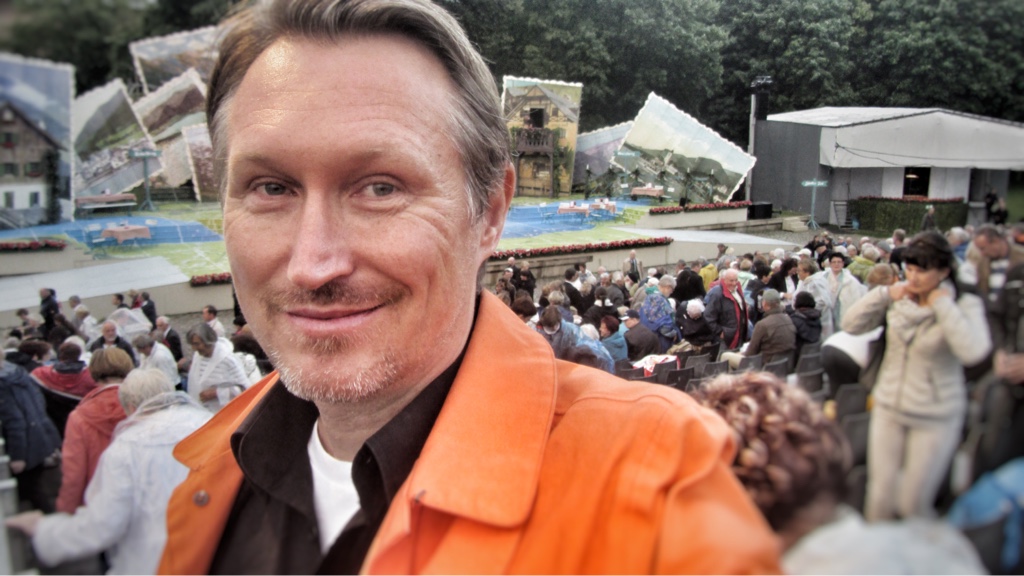 For more information on the performances and cast, click here.