It will come as no surprise when I say that Im weißen Rössl holds an extra-special place in my heart, as well as in my professional life. It’s the show I’ve written the most books, essays and articles about. And it’s a show I love discussing because you can illustrate almost everything that’s gone brilliantly right and terribly wrong in operetta history from the 1920s until today, because the show is so well-known in Germany and Austria that almost everyone can sing along the hit songs; certainly the title melody. Im weißen Rössl is a show particularly connected with Berlin: the play on which it is based, Oskar Blumenthal’s and Gustav Kadelburg’s Im weißen Rössl, premiered at Lessing-Theater in 1898, the operetta version by Erik Charell premiered at the Großes Schauspielhaus in 1930 before it went onto its international success tour that included London, Paris, and New York (all Charell stagings; there were many other stagings elsewhere by other directors, including Vienna which got a Hubert Marischka production). The superlative recordings by Max Hansen and Siegfried Arno were made in Berlin. And after many decades of neglect and re-vamping, the rediscovery of this beloved gem of a show also started in Berlin at Bar jeder Vernunft in 1994, starring Geschwister Pfister and Max Raabe among others. Later, the first full orchestra version of the reconstructed original score took place at Komische Oper in 2010. (Officially, it was Staatsoperette Dresden that premiered the reconstruction by Hagedorn & Grimminger, but Dresden didn’t have the orchestral forces necessary; which makes Berlin the ‘real’ first.) And now there is a new commercial production playing in Berlin at the Renaissance Theater. Is it another mile stone in the history of the show?

The beautiful art deco theater is a small venue, so it’s not surprising that the version on offer is a chamber music version akin to the Bar jeder Vernunft version. Which is fine; I’ve seen that version re-used at Theater in der Josepfstadt in Vienna in 2008, with a fresh new musical arrangement and an outstanding good cast. It was a pleasure to see the show with yodelers wearing bright pink latex-pants in an equally colorful Pop Art production. In Berlin – even though it’s Gay Pride season – there was no latex or pink to be seen, nor anything else that might be labeled Pop Art, instead the production by Torsten Fischer – using one-set-for-the-entire-evening, by Herbert Schäfer and Vasilis Triantafillopoulos – shows us the wooden interior of a hotel lobby. And most singers are dressed in a rather old-fashioned Alpine way. The exception being Dr. Siedler (Tonio Arango) and Ottilie-in-blue-jeans (Annemarie Brüntjen).

I shall not complain about this: Rössl has always been about mixing styles and time periods. But here the mixing almost drowns the show in melancholia – I felt like watching Rössl in slow motion, or as if in a trance. Everyone moved around the attractive stage like they were doped – but not in a speed-up or E way. Which killed a lot of the humor of a basically good cast headed by Boris Aljinović as Gieseke.

The proprietress of the hotel, the usually wonderful Winnie Böwe, was on the quiet side all evening and all the way through, singing elegantly but never demonstrating the deftness of Andreja Schneider (unsurpassed in every way in that role).

Then there’s Andreas Bieber as Leopold, singing and playing the role as if he were Peter Kraus, a 1960s rock’n’role alternative to Peter Alexander. I cannot honestly say that Bieber’s Sixties version of “Aber meine Herrschaften” impressed me, neither as novel, nor as convincing, nor as particularly good. It just rushed past me, but it appealed to an audience that obviously had low expectations. (And that probably loves the Peter Alexander film and music by Peter Kraus.) – I shall refrain from commenting on the love duets sung by Dr. Siedler and Ottilie (in a fold-up tent): for me these were low points in the history of any operetta performance tradition.

The only real treat was having Angelika Milster – herself a big star and potential Josepha – as Kathie, the postal service lady. Miss Milster manages to turn her scenes and musical numbers into stand-out moments; which is astonishing since everyone else gets to sing the big hits, while she’s left with the chorus numbers involving cows. In this case, I wished the cows would have gone on singing forever. (Even though there were no cows and no sexy cowboys…. what would Erik Charell have said to that?)

It amazes me that after the countless productions I’ve seen in recent years – many had memorable scenes and innovative ideas – this latest offering in Berlin, of all places, has absolutely nothing memorable or innovative to say. Instead it recycles old clichés (for example an ultra-camp Ralf Morgenstern as Sigismund) and cut away large chunks of dialogue, making the action highly erratic at times. Because the logical construction of the farce was destroyed, on purpose. Or is it just because the director didn’t know any better?

Talking about not-knowing-better: since everything is updated to present times, the question remains how Emperor Franz Joseph could fit into this plot? Guess what: he appears to Josepha in a dream! I wasn’t sure whether I should smile or weep. (At least Miss Böwe’s rendition of “Es ist einmal im Leben so” was suitably touching, but then again, this number always works it’s magic.)

The small band – lead by Harry Ermer – sounded good, in a small-band-kind-of-way, but there was no special fun; because, as I said, this show preferred staying on the melancholy side, even when the text book and song lyrics demand slap stick humor. The Bar jeder Vernunft and Theater in der Josefstadt have both deomonstrated, in the past, that you can combine the various elements and still have a lot of hillarious fun with this show/score. White Horse Inn should be more than an excercise in nostalgia!

With all this said: the performances this summer were mostly well attended and sold out. And ticket sales for next year’s revival have already begun. It seems that Im weißen Rössl works even in this kind of staging. And maybe the Renaissance Theater audience has no other expectations? Considering what’s on offer elsewhere in Berlin, this is almost shocking. It’s also a reminder that there is this kind and that kind of audience for operetta. The original Erik Charell production, back in 1930, managed to satisfy both kinds. It also bubbled over with ideas and wit. Not to mention sex appeal. All three aspects are severly lacking in this new production. (Don’t forget: the Nazis banned Rössl because of charges of ‘indecency’, and a Jewish creative team headed by Erik Charell.)

Talking of Charell: Berlin has a new wine bar named after Erik Charell, right where the old Großes Schauspielhaus used to stand. It uses his famous signature as a neon light sign. 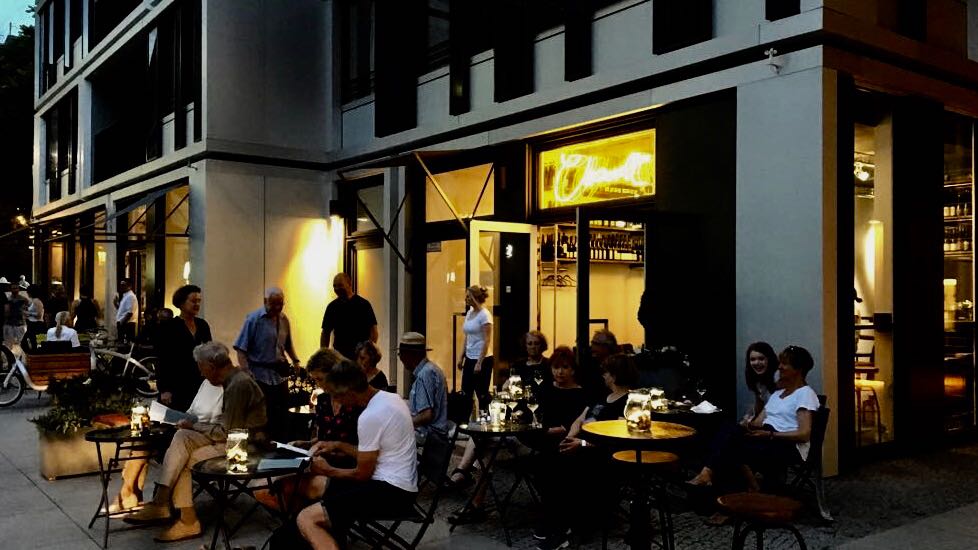 Should you think this reads like a really uninspired article, you’re absolutely right. It reflects my sadness and mood upon leaving the theater. A total bashing might have made for a better read, but strangely it wasn’t a ‘bad’ production, just a very ‘boring’ one. I’m not sure what’s worse.

All images of the Renaissance Theater production are by Barbara Braun and from www.drama-berlin.de (Agentur für Theaterfotos).