Not too long ago, Berlin’s operetta pioneer Barrie Kosky stated in the Österreichische Musikzeitschrift, that he considers the performers of the Budapest Operetta Theater (BOT) the true heirs of the virtuoso style that pre-war stars such as Louis Treumann or Fritzi Massary were famous for: “The Budapest ensemble acts, plays and dances with incredible energy and virtuosity. They understand the special way operetta needs to be presented, and they remind us how the genre was performed before 1933 – but they also make us keenly aware of what has been lost after the Nazis ruined operetta.” Now, the Budapest Operetta Theater is co-organizing a singing competition which is, ironically, dedicated to Hitler’s “favorite composer.” The 10th Year of the International Operetta Singing Competition of Franz Lehár will be held in October 2016 in Komárno. If you don’t know where that is: it’s a town in Slovakia where the Danube and Váh rivers flow together. Komárno was formed from part of a historical town in Hungary, situated on both banks of the Danube. It is the center of the Hungarian community in Slovakia. 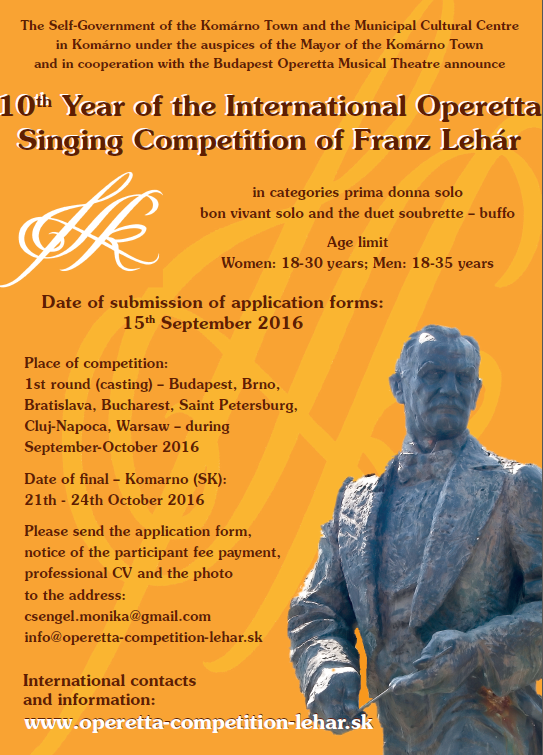 Poster for the 2016 “International Operetta Singing Competition of Franz Lehár.”

The so called “Self-Government of the Komárno Town,” in cooperation with BOT, will hold this competition in the categories “prima donna solo,” “bon vivant solo” and “duet soubrette/buffo.” The 1st round is held “world-wide,” which in this case means: Bucharest, Prague, St. Petersburg, Cluj-Napoca (Hungary), Budapest, Bratislava, and Komárno. The 2nd and 3rd rounds (semi-final and final) will be held at the Municipal Cultural Centre of Komárno. The date for the finals is 21 to 23 October. Whoever wins the competition will be part of a grand gala concert on October 24 in Budapest, for a celebration patriotically entitled The Day of the Hungarian Operetta.

Who can participate? Women between 18 and 30, and men aged 18 to 35. Why there is an age difference has not be specified, sadly. Anyone interested can send a detailed CV, a photo “of a whole figure” and a “perfectly filled application form” to info@operettacompetiton-lehar.sk. The deadline for submissions is 15 September, 2016. 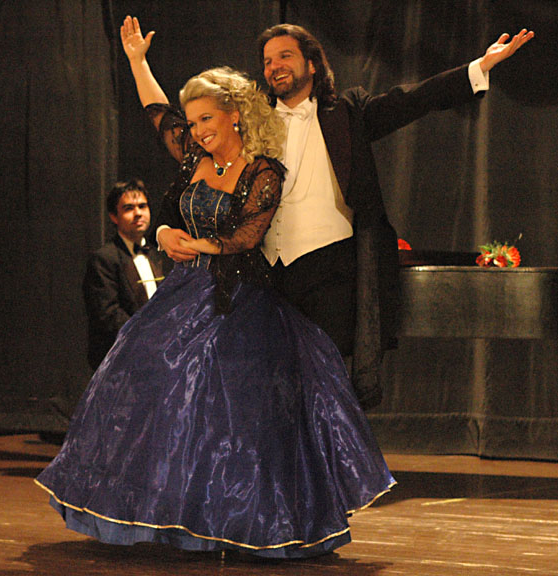 Interested singers can download the application form here. There is a participation fee of 70 Euro, to cover accommodation and food. There is also a list of obligatory songs. Singers should present two titles, one “an arbitrarily chosen aria or duet from Lehár´s oeuvre,” the other “an arbitrarily chosen song from an operetta of a different author.”

For the 2nd round a total of 35 to 40 participants are expected. For them there are “obligatory interpretations” that will be performed with orchestra. Again, there is a list of songs and duets you are expected to present, ranging from Giuditta’s “Meine Lippen küssen so heiss“ to “Dein ist mein ganzes Herz” from Land des Lächelns. Whether these big-sing numbers can highlight the special talents of Hungarian operetta performers mentioned by Barrie Kosky is somewhat questionable. But the opulent evergreens are certainly as popular as ever, and the respective operettas are performed regularly throughout the world. So new singers are needed to perform them, perhaps finding a new style that points to way to a new future for Lehár operettas?

All works are to be sung in an original keys, without use of a microphone, in the original language or in the interpreter’s native language. Duets have to be choreographed. 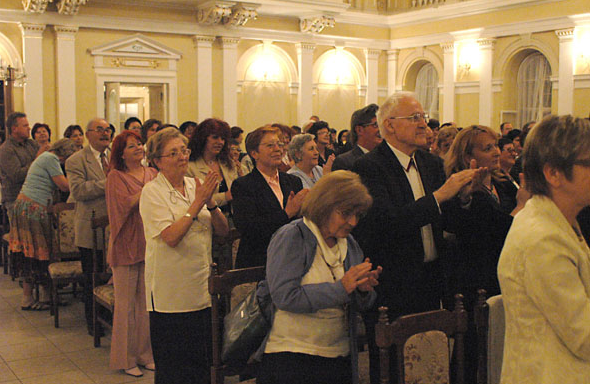 The audience in Komárno, at the International Operetta Singing Competition of Franz Lehár.

The winners of the competition will not only participate in the patriotic operettagala in Budapest, they will also receive money prizes: the Great Prize of the Festival is 3.000 Euro, the 1st prize in each category is 1.000 Euro, 2nd prize is 500 Euro.

The official aim of the competition is “international popularization of operetta genre and discovery of new talents.“ Well, we will see about that.

As Mr. Kosky has demonstrated with his operetta productions in Berlin, new talent can be a life saver for operettas, also the big-sing titles – remember Dagmar Manzel performing the Gitta Alpar part in Paul Abraham’s Ball im Savoy in a unique new way that has nothing to do with opera singing, but is convincing nonetheless.

We are curious to see how open the Komárno jury is to such novel approaches to operetta, and what the winners on October 24 will sound like at the The Day of the Hungarian Operetta.

For more information and details on the participation requirements, click here.