It doesn’t happen too often that a musicological magazine dedicates an entire issue to “operetta”: with eight short essays dealing with highly diverse aspects of the genre. But this is what happened at the Österreichische Musikzeitschrift, the Austrian music history magazine. It’s been around since 1946 and is currently edited by journalist Frieder Reininghaus. It is a publication supported, financially, by the Bundeskanzleramt Österreich, Wien Kultur and the AKM (authors, composers, music publishers). Their issue 3/2016 has Fritzi Massary on the cover and asks: “Operette – hipp oder miefig?” You would think that in a historical context there might be more relevant questions to ask than whether operetta is up-to-date and hip or old-fashioned and smelly. The following pages and essays do not answer this banal question. Instead, they make anyone seriously interested in operetta wonder what went on in that editorial office at ÖMZ. Are they serious about this? 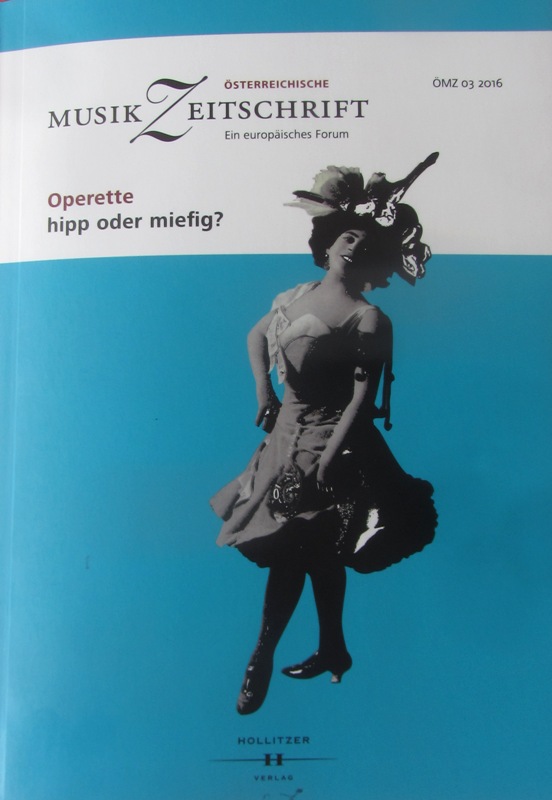 Cover of the 2016 operetta issue of the ÖMZ.

Let’s start with the positive things, the essays that make it worth buying this issue. There is a superb article by Matthias Kaufmann about Heinrich Strecker and his ‘nostalgic’ operettas from Nazi times, Ännchen von Tharau and Küsse im Mai. Mr. Kaufmann describes, in detail, the Nazi activities of composer Strecker, his early party membership and his enthusiasm for the new cause. However, Kaufmann then goes on to claim that the elements that reflect this ideological background in the shows are so ‘harmless’ they allowed post-1945 audiences to ignore them. They ‘denazified’ themselves, as Mr. Kaufmann puts it, and the author choses to also see them as denazified and unproblematic from a present-day perspective. It is an argument I personally find somewhat stunning; it remains to be seen how Kaufmann will explain this in greater details when his PhD on Heinz Hentschke comes out soon. Hentschke was the top operetta Nazi in charge of the Metropoltheater Berlin.

Another interesting and insightful article is by Stefan Frey on the production aspects of operetta, and how important the actors and audiences were in the process of creating great works.

For me, one of the most remarkable aspects here was the fact that Lehár did not compose “Lippen schweigen” as a duet until 100 performances after the premiere of Lustige Witwe. It had originally only been a small dance scene between Mizzi Günther and Louis Treumann, but it was so successful with audiences that it was expanded and eventually given a text by the librettists. In that duet version it became the most famous waltz of Lehár’s entire career and one of the most influential moments in operetta history. Who would have guessed that the audience in Vienna made this possible?

Next to such interesting historical backgrounds, essays by Michael Lackner about the festival in Ischl are problematic. Mr. Lackner doesn’t have anything novel to say, unless you count his argument that ‘traditional’ operetta performances – as offered in Ischl – find new audiences from Asia and Eastern Europe, as substitute for the younger central European audiences. It is Mr. Lackner himself who asks how a young audience, used to cinema and TV shows, could be persuaded to visit operetta performances. His essay, and the type of productions he has offered in Ischl after 2004, give a pretty clear answer …. Stay away! It’s stunning to know that the same man who focuses on Asian and Eastern European audiences as a solution for the ‘operetta problem’ is the designated new director of Baden, near Vienna.

If you look closely at this ÖMZ issue, you’ll notice that all the Austrian summer festivals – Baden, Mörbisch, Ischl etc. – have placed advertisements.

This might explain why Mr. Lackner is given such space. (His essay is far longer than those of Frey or Kaufmann.) Does this also explain why Frieder Reinighaus sings the praises of Herbert Wernicke and Christoph Marthaler without asking if their 1980s and 90s vision of ‘operetta’ might have driven more modern-day audiences away from the genre than the other way round? Reininghaus does not put these controversial productions into relation to the current operetta boom initiated by Barrie Kosky. And Mr. Kosky – our hero! – gets to present his vision in an essay, too. But instead of giving his usual cheeky and thought-provoking ideas about operetta (which he has done in many interviews) he here delivers a rather tame essay that has none of the typical Kosky characteristics. It reads as if someone else might have written it for him, without the glowing enthusiasm that is Kosky’s trademark. Interestingly enough, he praises the performers of the Budapest Operetta Theater (BOT) as modern-day examples of a true and authentic operetta performance style…. even though Kosky is also very critical of the Budapest style of staging operettas.

Other articles, such as Carolin Stahrenberg’s Austrian history of Im weißen Rössl gather facts that are worth knowing, but have nothing new to say about the show itself. We’ll have to wait for the big new Rössl book edited by Nils Grosch, due anytime soon, for real new insights. And if you are interested in “Vienna Operetta as an Austrian memorial space” (Die Wiener Operette als österreichischer Gedächtnisort) you might want to save your time and skip this article by Christian Glanz: go straight to Moritz Csaky!

All in all, this is a very mixed bag of goodies.

You might call it a missed opportunity to give new impulses and start new discussions: about Nazi operettas, for example, about the way the entire production teams for operettas should be considered, and not just the composers, about operetta stagings from the 1990s vs. 2010s etc. While Austrian operetta is given much space in this ÖMZ issue, German language operettas from former East Germany (DDR) are not mentioned and operettas from outside of the German speaking world only get a mention in the case of Wernicke/Marthaler productions of Offenbach. That’s it, and that’s very little.

In the back of the magazine, in the regular part of the issue not devoted to operetta, there is a review of the not-so-new Richard Tauber biography by Martin Sollfrank from 2014. And to finish, there is a final text by Judith Kemp on “Plüsch” and “Plüschzeit”: it describes how over-the-top nostalgic decoration can be a legitimate element in operetta productions. What can we say to such nonesense? Perhaps it is best to have Fritzi Massary – the ÖMZ cover girl – have the last word and set matters straight.