Emmerich Kálmán’s Die Faschingsfee had a very chequered history in its first few years. It was first seen in Budapest in 1915, where it was so successful that an American version Miss Springtime was staged in New York in 1916, adapted by P G Wodehouse and Guy Bolton, with extra songs by Jerome Kern. In 1917 the show came to Vienna with a new libretto by Alfred Maria Willner und Rudolf Österreicher and, gradually, new music by Kálmán. This was the version used by the Gärtnerplatz Theater Munich at carnival 2017. The production recently staged at Mönchengladbach is based on the Metropol Theater version of 1918, which starred Fritzi Massary, who had one of her greatest triumphs with the show. (Following her acclaimed Csardasfürstin at the same venue, just before. Sadly, she did not continue exploring Kálmán repertoire.) This Berlin version is now used with new dialogue by stage director Carsten Süss. He clearly knows how to direct operetta in order to bring out both the humour as well as the pathos. His motto: ‘Operetta ist eine Schokolade; richtig gut wird sie erst, wenn man den Zucker auf ein Minimum reduziert.’ Which translates as ‘operetta is like chocolate, it starts getting really good when you reduce the sugar to a minimum.‘

The one and only Fritzi Massary as Csardasfürstin in Berlin.

The show has been staged with great attention to detail in Mönchengladbach, which does not mean that it lacks energy. Quite the reverse in fact, as Mr Süss knows how to pace each scene of the operetta so that each of the three acts not only involves the audience totally, but builds dramatically to its climax. Act three, especially, often the weakest in modern-day performances of Viennese operetta, is structured so beautifully that by the denouement the whole audience is begging for the happy ending we all thought we knew was going to happen, but nearly didn’t. The director does this apparently simply by having two very fast, lightweight, very amusing, musical numbers succeeded by a movingly tragic scene, thoroughly believable, where we continually think that Mr Süß has changed the ending: thank goodness at the last possible moment as the house tabs are closing a ‘Happy End’ is  contrived. Magical!

(If you are unable to see the entire operetta, just go in for the final twenty minutes!)

However, Carsten Süss is not alone in knowing what operetta is all about. He is greatly aided by the stylish playing of the orchestra under Andreas Fellner and the chorus, each member of whom is treated as an individual with a different role: this is especially apparent in the party scene of Act One where there is always something going on. Each of them can also dance as the inventive choreographer, David Williams, proves.

The production appears lavish: there are three superbly designed (Siegfried E Mayer) full stage sets, each evocative of the 1950s period, including a car which breaks down in Act One, a vast artist’s studio for Act Two and a ‘faded’ hotel for Act Three. Each is evocatively and atmospherically lit. 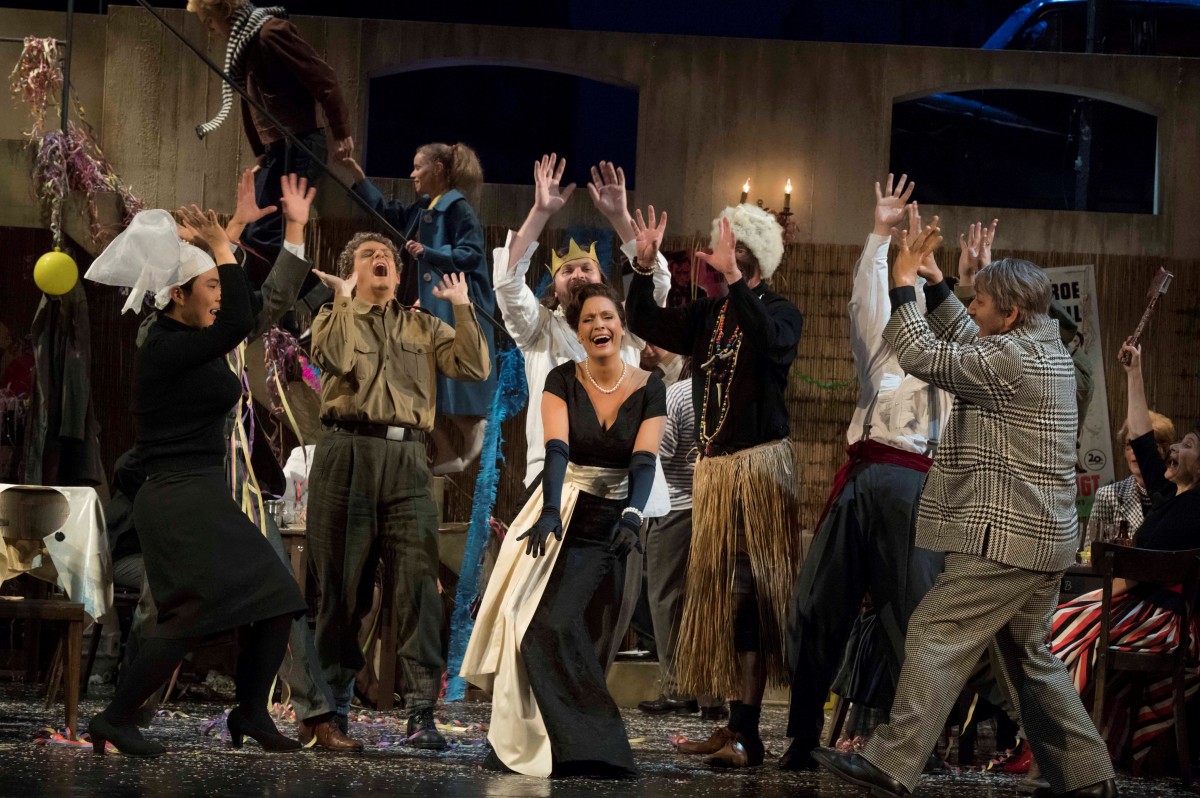 The cast is unusual in that all look the right age, all can sing superbly and all can act (!) with dialogue scenes being beautifully and naturally paced leading seamlessly into and out of musical numbers. All the roles are believable and three-dimensional so that we believe in what is happening to them in the plot and really care what happens to them.

It is perhaps unfair to single anyone out, but the American soprano, Debra Hays just is Alexandra, looking glorious. Michael Siemon as Viktor, the penniless artist is putty in her hands and has the effortless high tessitura this role calls for. 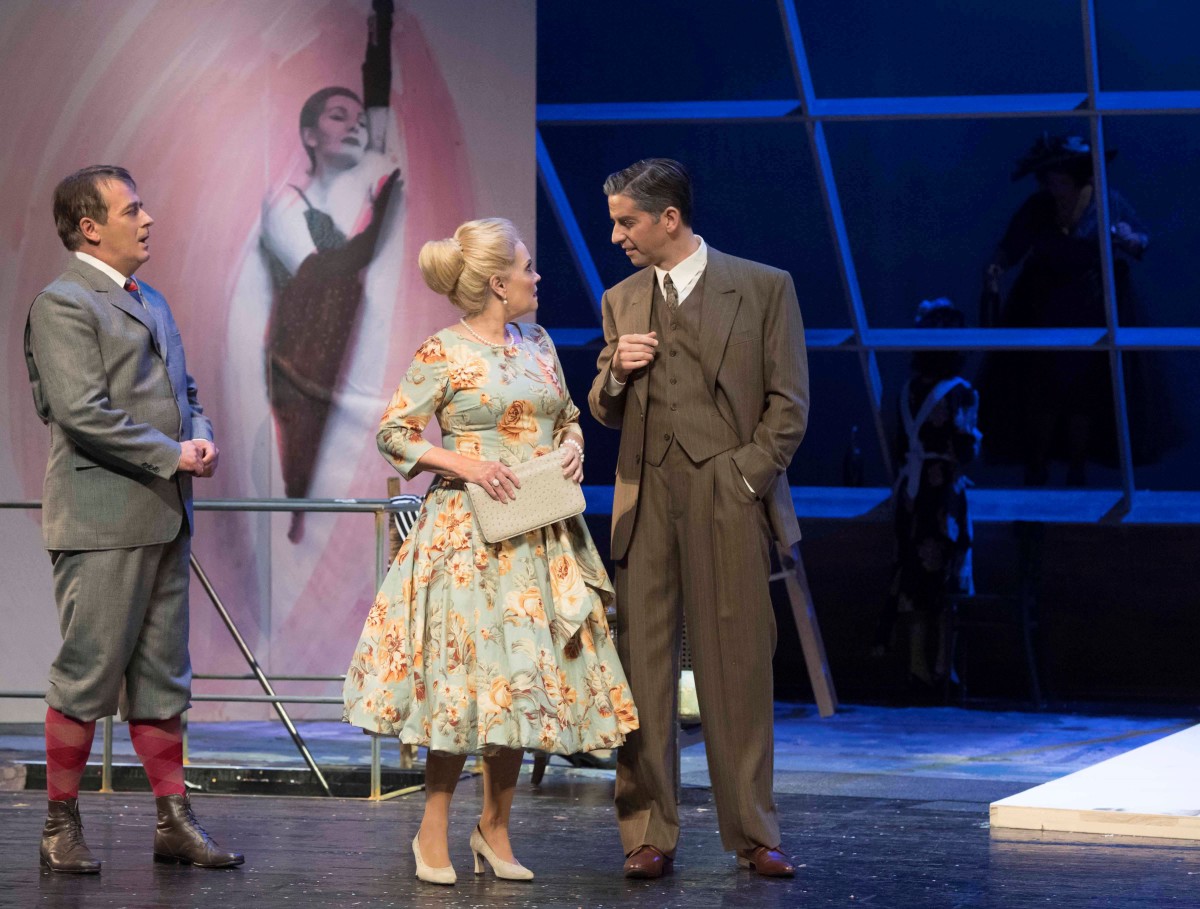 The soubrette couple Hubert (Markus Heinrich) and Lori (Gabriella Kuhn) provide much light relief, being superb dancers and having a great sense of fun. The director exploits to the full the contrasts between these two couples, and Lothar Meredit (Juan Carlos Petruzziello – very tall and thin) is portrayed as a silly ass ultra rightwing fanaticist with whom we have no sympathies, but just laugh at him!  Ottakar (Michael Grosse) to whom widow Alexandra is really engaged, is imagined as a very boring, dull ageing businessman. How on earth can Alexandra even consider marrying him?

As I hope I have succeeded in conveying, this is a superb production in every respect, both looking and sounding lavish on the wide, deep  stage of Theater Mönchengladbach, which is actually in Rheydt! (Two minutes from the railway station past the police station…) 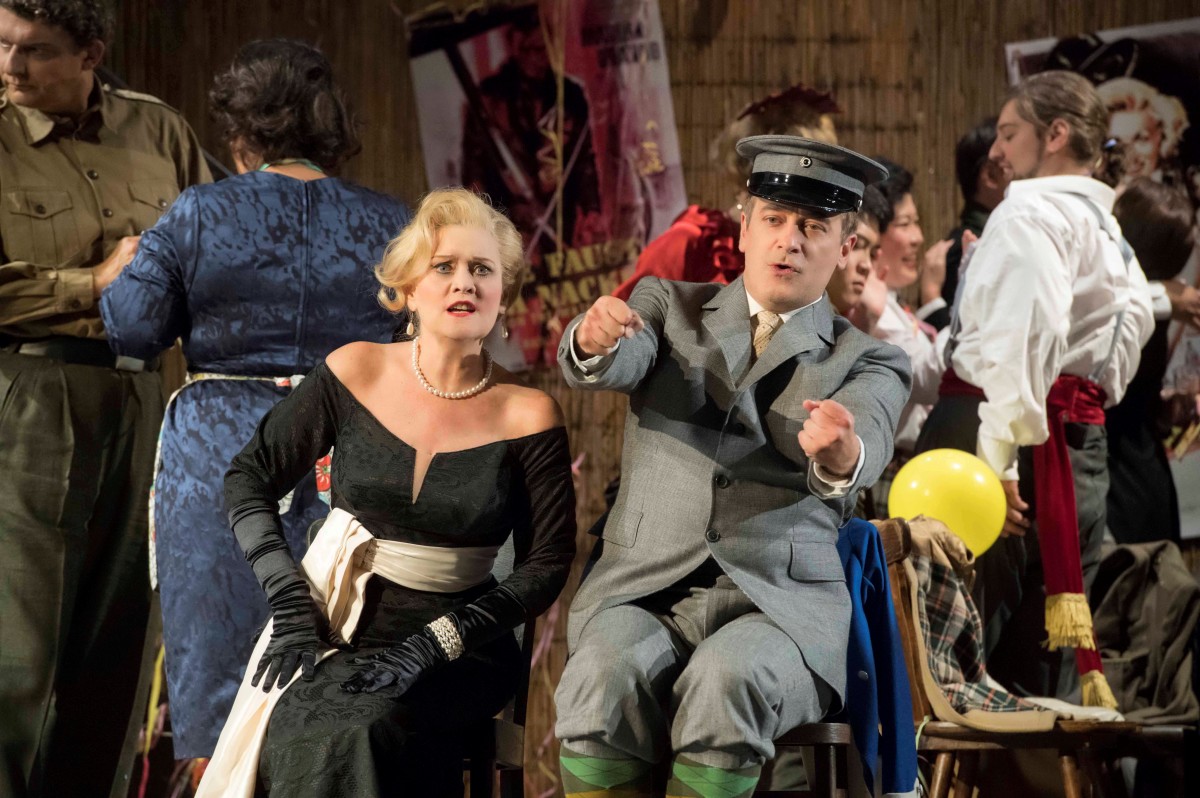 There are a few more performances this season, but if you are not able to get there at present, it is being revived in 2018-9 at the ensemble’s sister theatre at Krefeld.

I strongly recommend this production of Die Faschingsfee to all, especially those who consider operetta ‘old-fashioned’ and irrelevant.

A bouncy recording of much of the score, conducted by Peter Falk and including Melanie Holliday as Alexandra, is available on the Laserlight Classics CD label.