The nomadic company of Staatstheater am Gärtnerplatz has staged a rare, highly successful and most enjoyable revival of Kalman’s 1917 operetta Die Faschingsfee (The Carnival Fairy), which, as it is set in Munich at Carnival time (February – before Lent), is most appropriate. Clearly, the good people of Munich think so too, as the run of performances has completely sold out, with more added. It is to be hoped that when the Gärtnerplatz Theatre eventually reopens, it will be possible to revive it there. 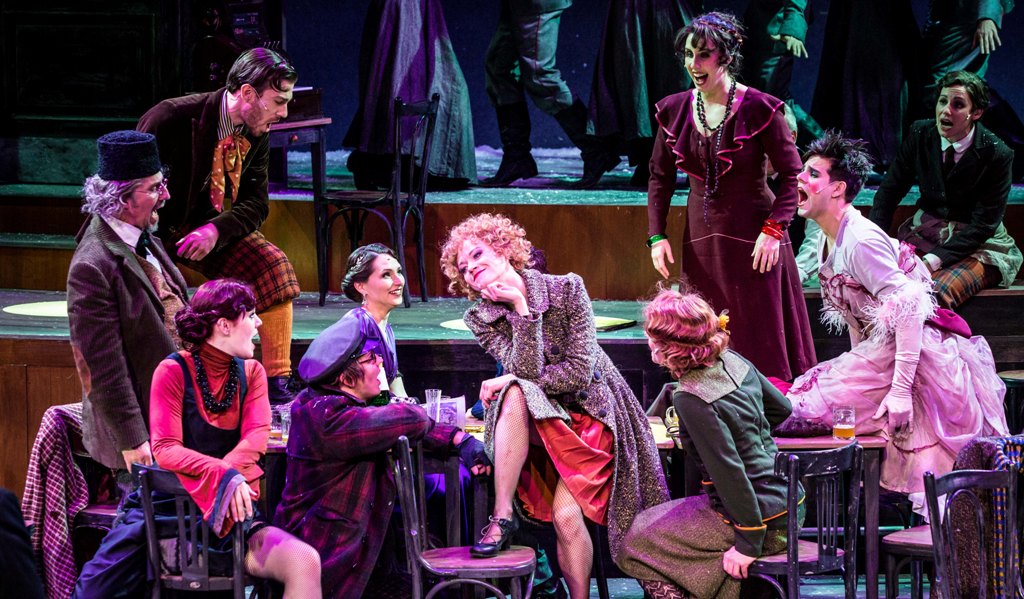 The ensemble in the new Munich production of “Die Faschingsfee” by the Gärtnerplatz Theater. (Photo: Marie-Laure Briane)

Whether it will be as successful must be in doubt, as the production is tailored to the flat-floored Alte Kongresshalle, which it seems to monopolize, with the audience on temporary staging on three sides of the acting area and the superb orchestra and conductor (Michael Brandstaetter) almost hidden from view behind the star-littered backdrop. This thrust stage arrangement not only means that every audience member is close to what is going on, but feels much more involved than in a traditional theatre.

The operetta is directed by the Gärtnerplatz’s Intendant, Josef Koepplinger, with tremendous energy and a great sense of the style needed for this piece, set in the last days of WW1 in an artists’ cafe peopled by a wide variety of interesting characters.  There is no chorus as such, everyone being integrated into the action and given an individual character, whilst the ten members of the ballet, dressed in grey Red Cross uniforms, plus red balloons, are given the task of unifying the action and commenting on it in mime. 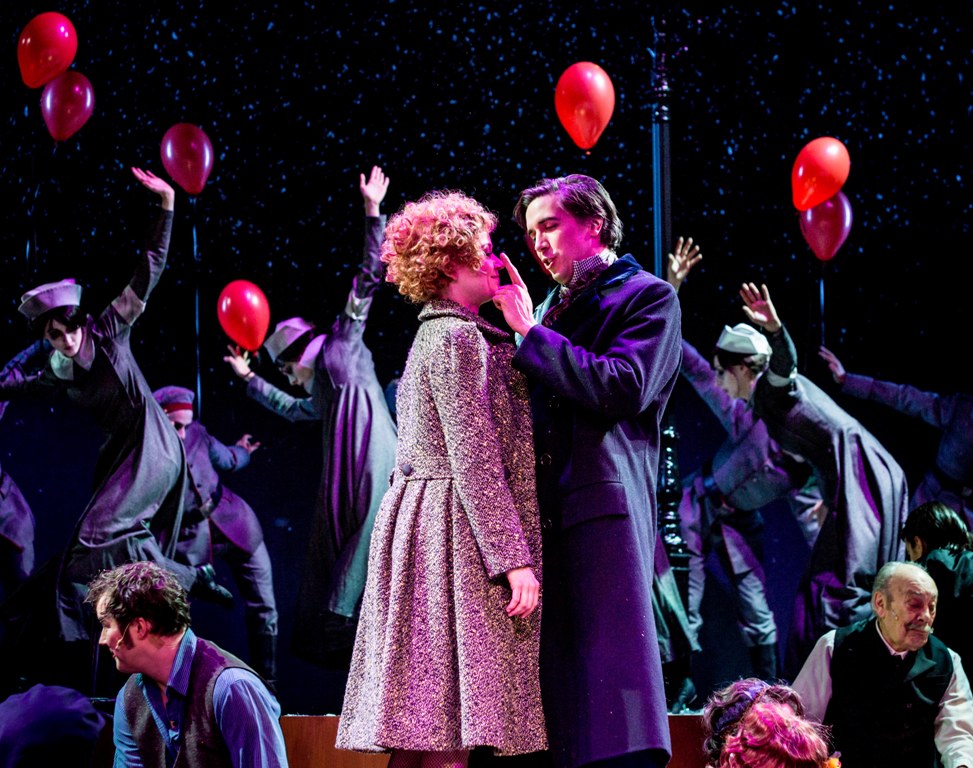 The plot concerns the widowed but still young countess Alexandra Maria, beautifully sung and acted by Camille Schnoor in a gorgeous costume (as are they all thanks to Dagmar Morell, the designer). Not only is she suave and beautiful, she is also the right age and her acting is totally convincing. She is charismatic and dominates the stage, even when just sitting listening. When Alexandra’s car breaks down outside the cafe, she meets the painter Viktor Ronai. Daniel Prohaska is totally convincing in this role, having the charm of a young artist who has just been awarded a 10,000 Mark contract for a fresco by Count Lothar Mereditt, (Maximilian Mayer) who is, unfortunately for Viktor, Alexandra’s ageing fiance!  There are no prizes for guessing who Alexandra eventually marries! 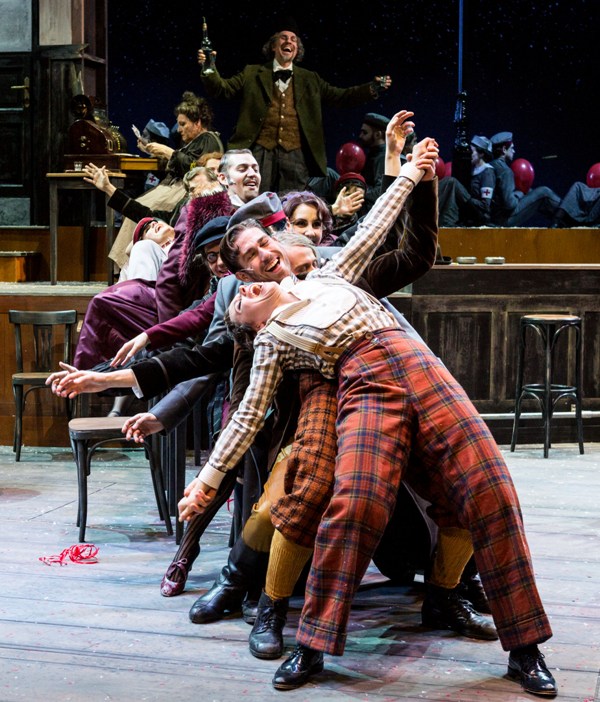 The dance ensemble in “Faschingsfee” in Munich. (Photo: Marie-Laure Briane)

The sub-plot concerns the romantic entanglement of  chorus girl, Lori, both violent and jealous, acted with verve and great accuracy of punch by Nadin Zeintl, even if her singing is not quite as strong, and Baron Hubert (Simon Schnorr), who can do nothing right in her eyes! He has just the right amount of ‘devil-may care’  needed for this role, his eyes twinkling even when he is being attacked by Lori – as he is most of the time. Each throws themselves into their role with gusto. 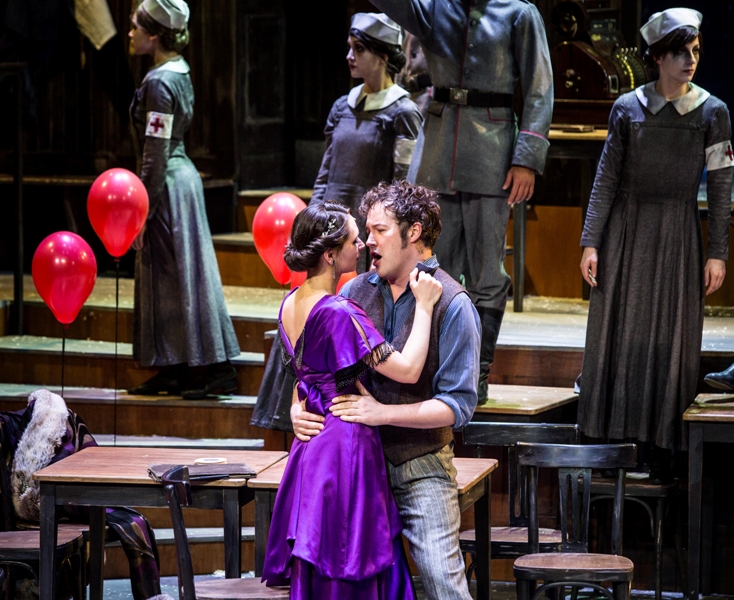 In fact there is not a weak member of the team, including heart stopping ‘cameo’ moments from Josef Ellers, a lyricist in drag, Dagmar Hellberg as an old flame of Count Ottakar and k/s Gisela Ehrensperger, who has one of the most moving songs of the evening. 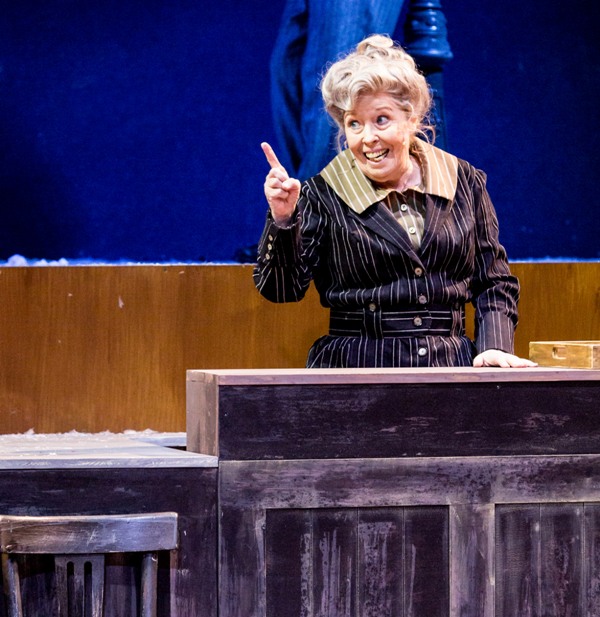 As I have already intimated, the single set, designed by Karl Fehringer and Judith Leikauf,  inhabits the Kongresshalle, taking full advantage of what might seem to less talented designers, obstacles.

Die Faschingsfee is one of Kalman’s early operettas, and as such has a plethora of wonderful waltzes, sumptuously orchestrated and done full justice to by the whole company. The show’s early history is too complex to be gone into here: it was seen in New York as Miss Springtime before being given in Vienna or Berlin. Not every number is a waltz: it just seems like that! (Listen to US dance band versions here.)

My only cavil is that the interval is taken half way through Act Two, which ruins the dramatic shape of the piece. In fact an interval is hardly necessary as end to end it is only 100 minutes in length!

Even if you cannot get tickets to see this wonderful, evocative, production (and if you can steal beg or borrow one do so!), the program is well worth acquiring and is a shining example of what all theatre programs should be: no advertisements (!), lots of color photographs of the production, and some very interesting articles: not just ones culled from other publications to fill space, but ones that are informative and relevant. Full marks! 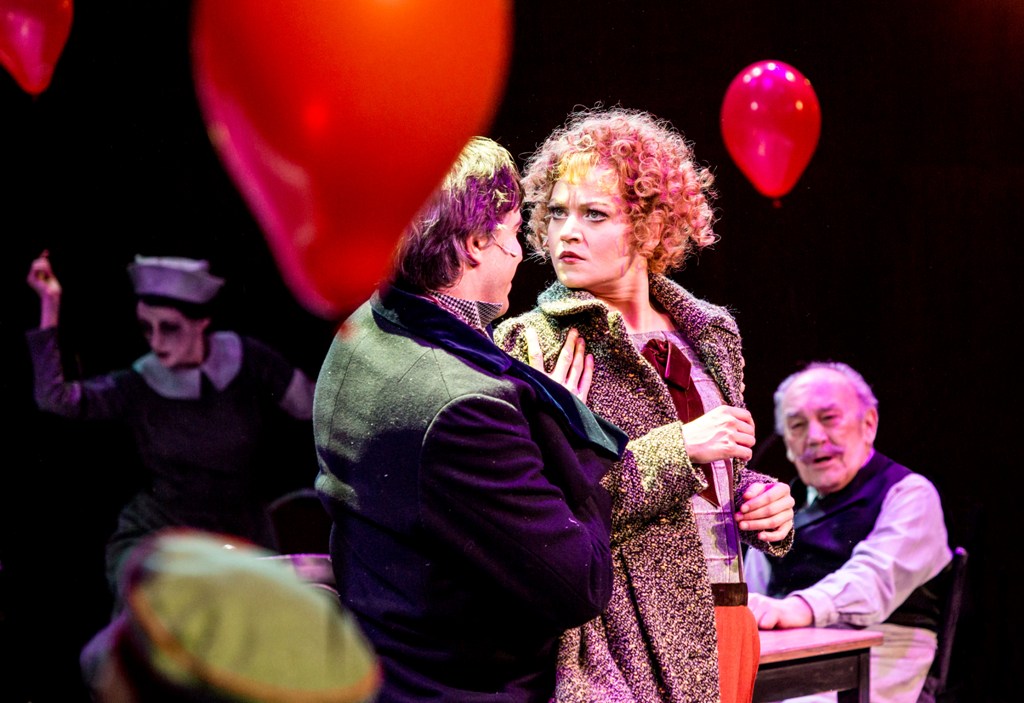 There is at present, only one German language recording (Laserlight 14165) of this romantic, melodious, amusing show, from the 1980s in stereo, but it does show its age! However it can be recommended as it contains most of the score, and enthusiastic period style performances from Melanie Holliday (Alexandra) and Eberhard Büchner (Viktor) with the Cologne Radio Orchestra conducted by operetta specialist Peter Falk. There’s also an Ohio Light Opera version in English available on Albany Records, under the title The Carnival Fairy. And for a special treat: there are recordings of Fritzi Massary as Countess Alexandra, a role she performed with enormous success in Berlin at the Metropoltheater after her Csardasfürstin triumph. And: there is a recording of the sumptuous overture by Emmerich Kalman himself, from New York 1940. It’s part of the CD Kalman Conducts Kalman from Operetta Archives. It’s simply mavrellous!