Although they worked together as a trio on only five shows over seven years, the influence of “Bolton, Wodehouse, and Kern” on the development of American musical theater was monumental. Sensing perhaps a need to fill the vacuum created by the war-induced absence of the Viennese and Hungarian operetta imports that had filled Broadway theaters since even before The Merry Widow, their shows featured not the exotic locales and the dukes and duchesses of operetta, nor the lavish spectacle of the Ziegfeld Follies, but rather the romantic and comic entanglements of everyday Americans, in current dress and modern dialogue. These shows forever changed the landscape of Broadway; Richard Rodgers, Cole Porter, George Gershwin, and numerous others credited these musicals with inspiring their own development and quest for a theatrical style. Although only two of the five shows actually premiered at the 299-seat Princess Theatre on 39th St., they are all referred to as “ Princess musicals”: Have a Heart, Oh, Boy!, Leave It to Jane, Oh, Lady! Lady!!, and Sitting Pretty. 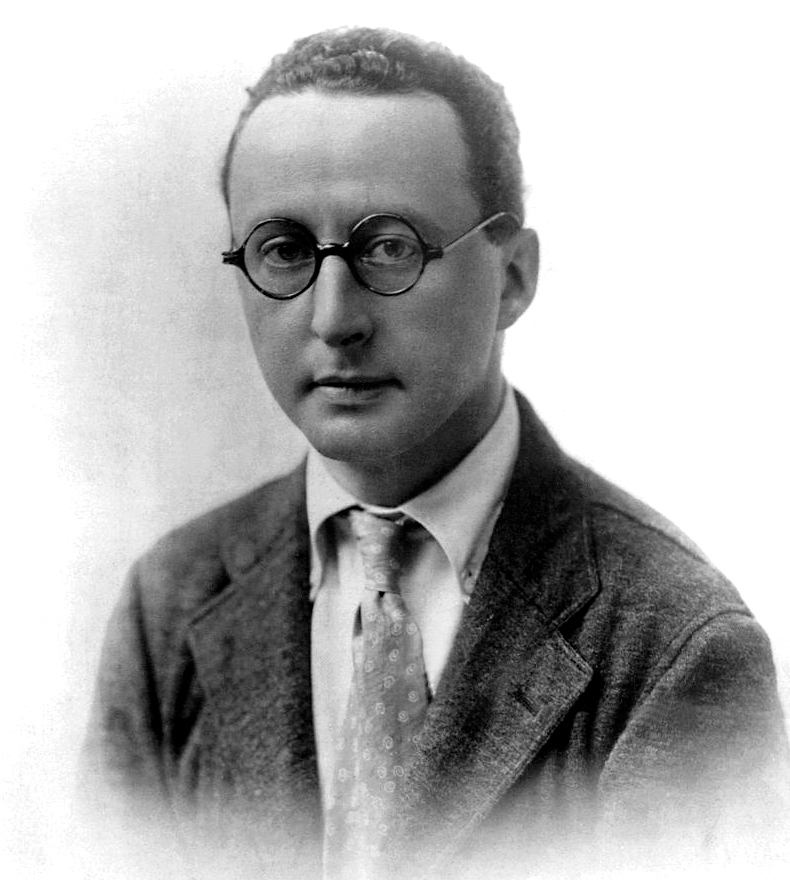 Jerome Kern was born in New York City on Mozart’s birthday (January 27) in 1885. His earliest theatrical compositions were songs written for interpolation into Broadway and London West End musicals, more often than not for imported operettas for which the producer sought to add local musical color. His first complete Broadway score was The Red Petticoat in 1912; over the next quarter century, he penned music for more than 40 shows, including Sally, Show Boat, The Cat and the Fiddle, and Roberta. 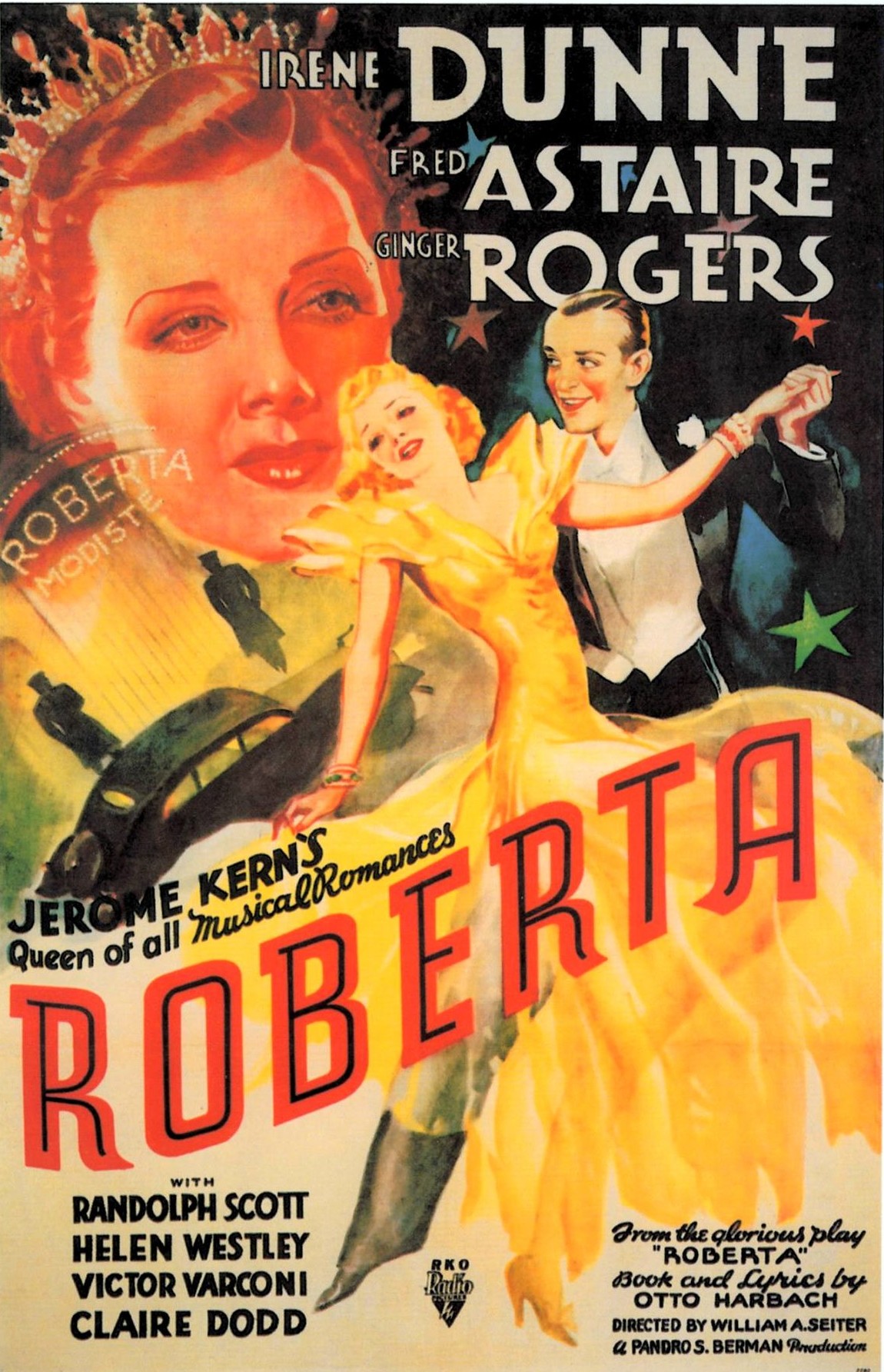 Pelham Grenville (P. G.) Wodehouse was born just outside London in 1881. While honing his comic prose writing, which led in 1915 to the first appearance of his lovable and enduring Jeeves character, he wrote lyrics for West End musicals, including one in 1905 for a song, “Mr. Chamberlain,” with music by Kern. His first full Broadway assignment was the English lyrics for Emmerich Kálmán’s Miss Springtime, in 1916. 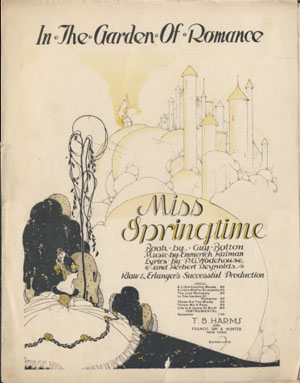 Sheet Music for the Song In the Garden of Romance from the Sheet music cover for Kalman’s “Miss Springtime,” the US version of “Faschingsfee.”

Guy Bolton was born to American parents in 1882, just northeast of London. With only straight plays thus far to his credit, he teamed with Jerome Kern in 1915 for the musical Ninety in the Shade, which closed after only 40 performances.

At the opening night of the next Bolton/Kern collaboration, Very Good Eddie, the composer introduced Bolton to his former collaborator Wodehouse. By the end of the evening, the three had agreed to work together. Their first full-show collaboration was Have a Heart, which opened at the Liberty Theatre on January 11, 1917. For Jerome Kern, it kicked off what theatre historian Gerald Bordman called his annus mirabilis—five musical openings in less than eight months, including Oh, Boy! and Leave It to Jane. 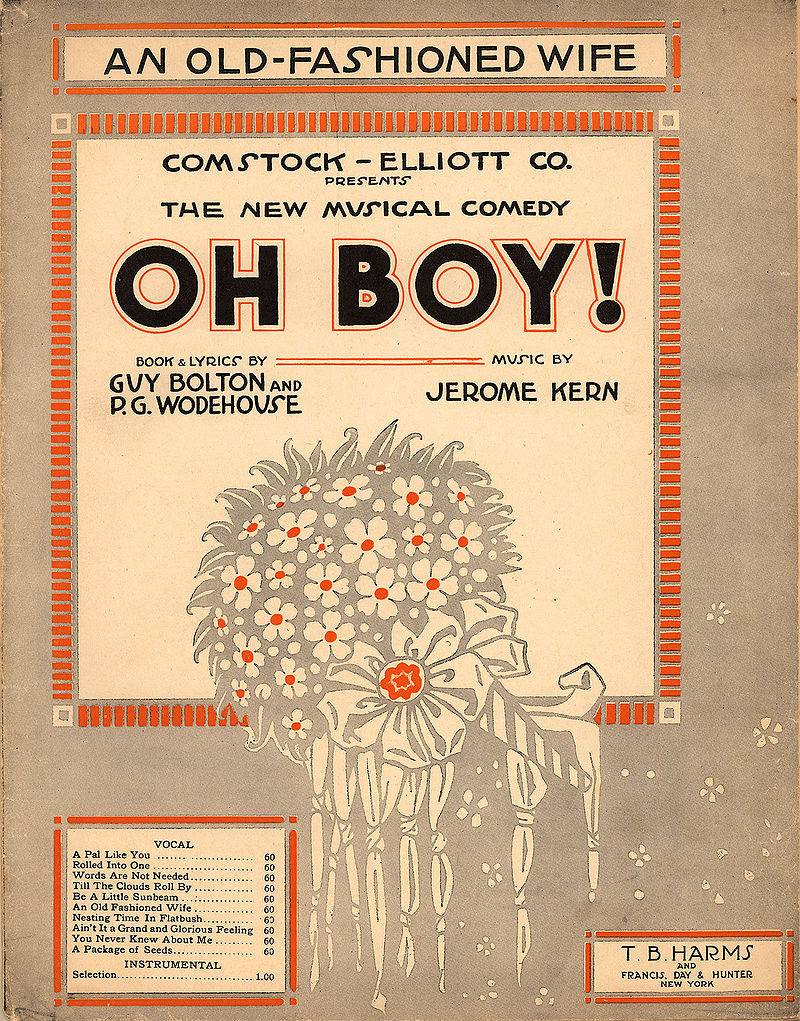 The comparatively short 76-performance run of Have a Heart tells only part of the story. In the two years following its Broadway opening, with a Company A and a Company B touring simultaneously, it played in no fewer than 36 states and five Canadian provinces. It is arguably the most musically engaging of Kern’s Princess-style shows, with a dazzling succession of winsome tunes, many quite innovative in their melodic, rhythmic, and harmonic palettes. The hit song was the irresistibly catchy second-act duet “You Said Something” for characters Ted and Lizzie. But historians and Kern himself have singled out “And I Am All Alone,” sung by the estranged couple, Ruddy and Peggy. In its unexpected harmonic progressions and intensity of feeling, it is in a class with Kern’s groundbreaking 1914 “They Didn’t Believe Me.” As an embarrassment of riches, this Ohio Light Opera production includes several songs—all of them gems—that were cut, or not yet present, in the Broadway opening. 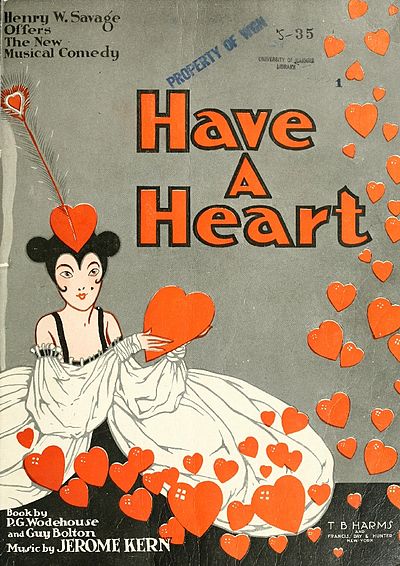 Shoppers at Schoonmaker’s Department Store are outraged when there is not a salesgirl to be found. When the staff finally shows up, they are none too happy about having to cut short their break to serve the customers. Ted Sheldon (Stephen Faulk) quizzes elevator boy Henry (Kyle Yampiro) about any openings for employment—he would give anything to work at the same job as his paramour Lizzie O’Brien (Emily Hagens), who appears and immediately begins bickering with Ted. Detective Baker (Royce Strider) arrives seeking a counterfeiter; he has come to meet up with his counterpart investigator Lizzie. Left alone, Lizzie makes it clear to Ted what he must do—namely make her a fortune—if they are ever to wed. No sooner has proprietor Rutherford “Ruddy” Schoonmaker (Nathan Brian) appeared than Ted inquires about a job. Ruddy hires him to deal with complaints—not those of the customers, which don’t interest him, but rather those of the salesgirls, whose condition he is trying to better. Ruddy’s estranged wife Peggy (Sarah Best) enters and runs into Captain Owen (Spencer Reese), a confidence man who has come to repay a debt to Ruddy, but winds up trying—albeit unsuccessfully—to convince Peggy that he is the one for her. Meanwhile, Ted asks Ruddy about the reasons behind the divorce. Ruddy explains that Peggy caught him at the Ocean View Hotel with former employee Dolly Brabazon (Tanya Roberts) and assumed the worst. Owen corners Ruddy, pays back the money owed, and tells him that he is planning to marry a girl whose soon-to-be former husband was a jerk. 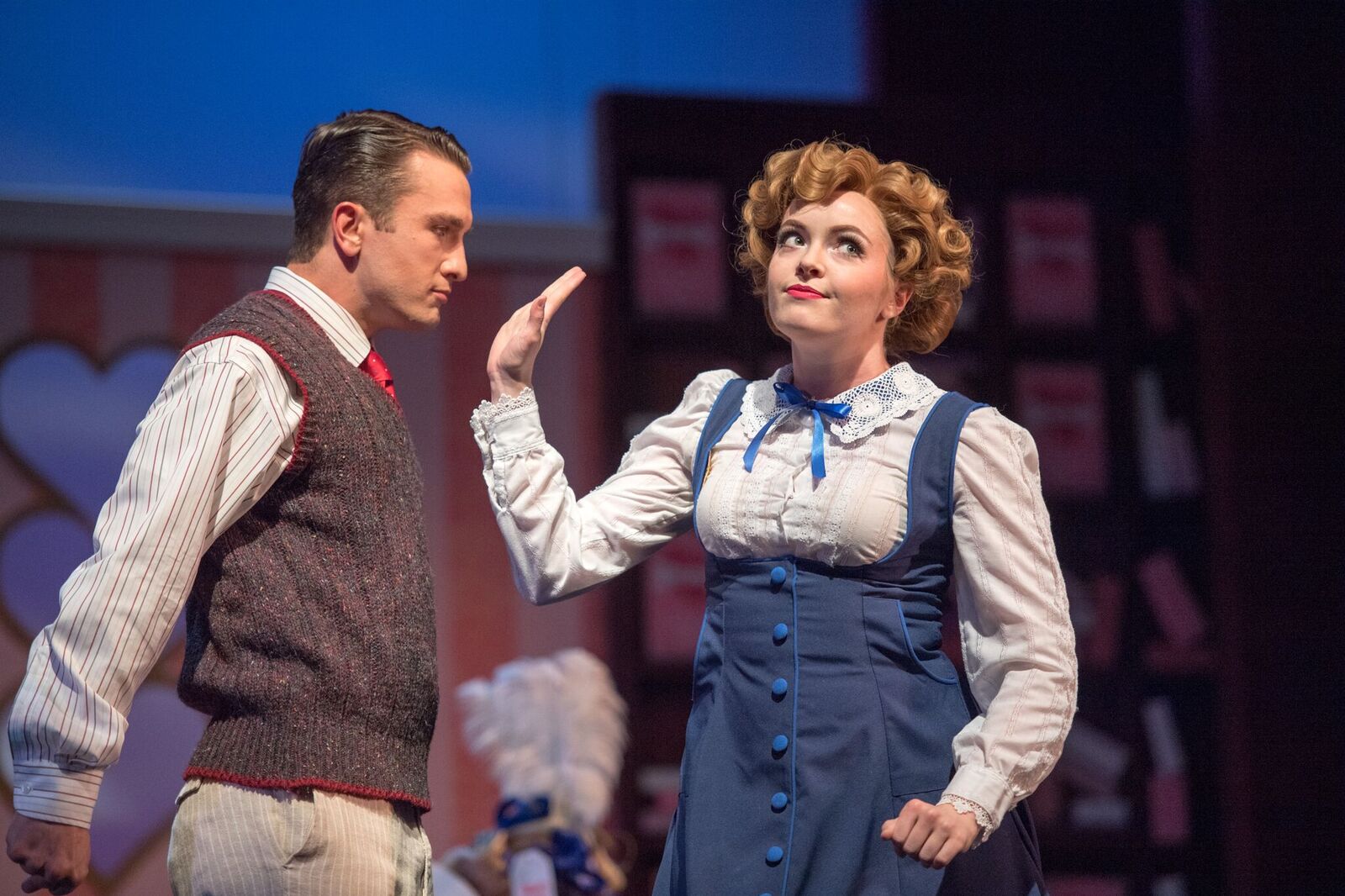 Scene from “Have a Heart” at Ohio, with a dazzling Stephen Faulk. (Photo: Matt Dilyard)

After the others have exited, Peggy and Ruddy begin reminiscing about earlier good times together. Ruddy reveals to Ted that Dolly, now a movie star in Hollywood and believing that Ruddy is in love with her, is coming to the store later that day—big trouble for Ruddy. Peggy’s aunt (Julie Wright Costa) and uncle (Mark Snyder-Schulte) arrive and ask Henry for the whereabouts of Lizzie, whom they have engaged to spy on Ruddy. When Henry confesses to Ruddy that he himself is in love with Dolly, Ruddy does everything to convince the elevator boy to court the film star and get her out of his hair. Peggy, convinced by Ruddy that he has not seen Dolly since that evening at the hotel, agrees to cancel the divorce proceedings and elope with him to the Ocean View Hotel. But when Dolly arrives with a stack of letters that Ruddy has sent her, and Peggy’s aunt and uncle catch Ruddy and Dolly in an apparent embrace, chaos ensues.

Ocean View Hotel entertainer Yossuf (Isaac Assor) regales the guests with an exotic tale of love in far-away Samarkand. Ruddy and Peggy arrive and register under the name “Smith,” ready to start their second honeymoon. Unbeknownst to them, however, Henry and Dolly have taken a table in the restaurant and are mistaken for the Smiths by the maître d’hôtel (David Geist). Peggy’s aunt and uncle arrive in search of Ruddy and Peggy; they are assigned the room adjacent to that of the couple. And, to further complicate matters, Detective Baker shows up, as well as Owen, who tries to convince Baker that Ruddy is the counterfeiter. Left alone for a moment, Ruddy and Peggy confirm their reignited love and look forward to life’s road ahead. Ruddy, recognizing the dire need to get his letters back from Dolly, enlists Henry’s help in setting up a secret meeting with Dolly. Meanwhile, at Lizzie’s request, Ted has brought her to the hotel. Still bickering, they nevertheless admit to being unable to live without one another. 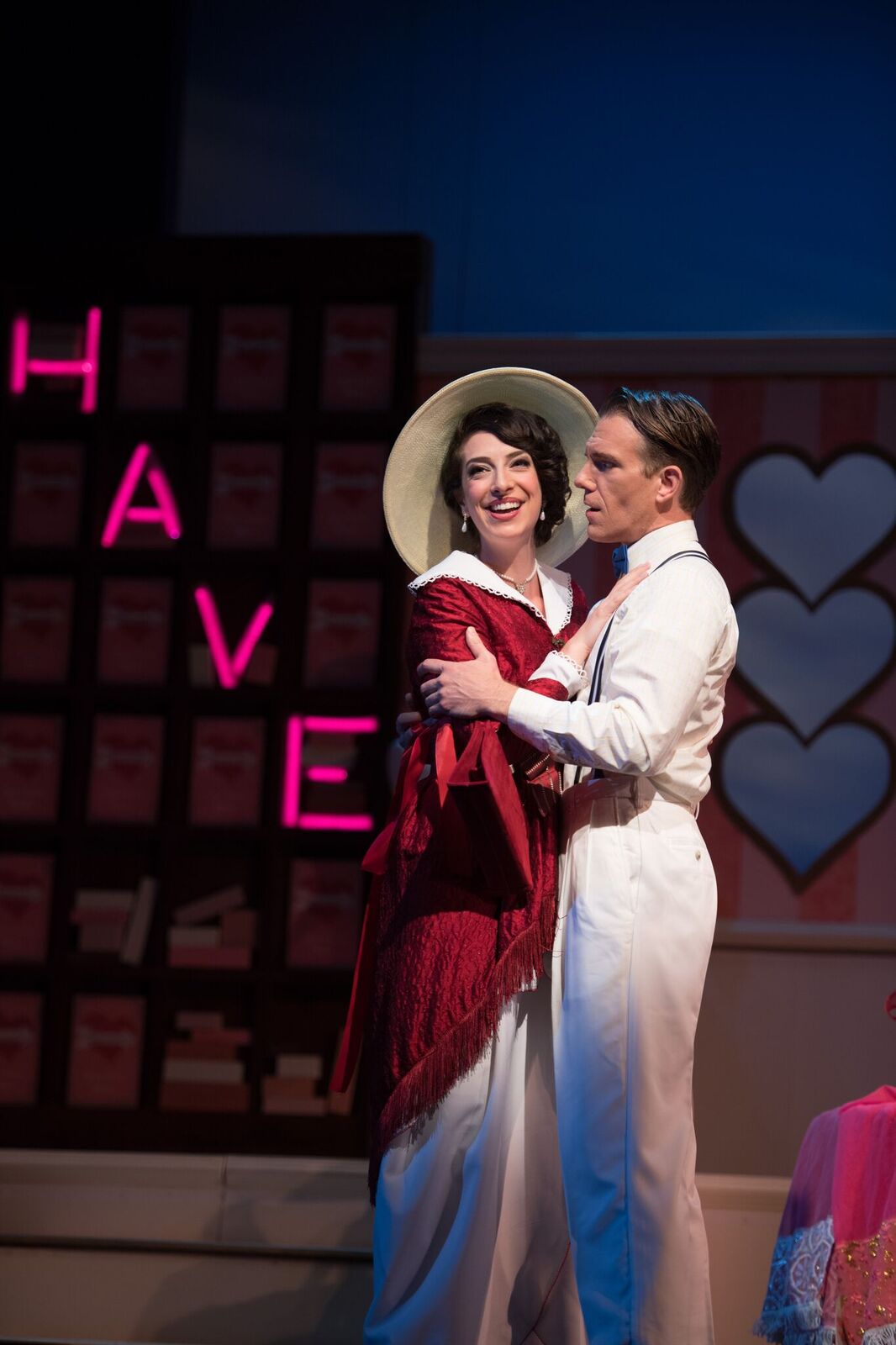 Scene from Jerome Kern’s “Have a Heart” at the Ohio Light Opera. (Photo: Matt Dilyard)

Finally, aunt and uncle, in the presence of their niece Peggy, accuse Ruddy of infidelity. Despite Ruddy’s denial, Peggy is confused—she seeks comfort in the dream playmates of her childhood. When she catches Ruddy and Dolly in their rendezvous, the situation seems even more hopeless. But, as usual … Henry to the rescue.

Jerome Kern’s “Have a Heart” at the Ohio Light Opera. (Photo: Matt Dilyard)

The Operetta Archives in Los Angeles have just released a live performance of Have a Heart from the Ohio Light Opera on DVD. For more information, click here or send an email. For a review of the DVD, click here.