Laurent Pelly’s celebrated production of Offenbach’s Barbe-bleue from the Opéra de Lyon has finally arrived on DVD. It offers Yann Beuron in the title role and comes combined with the 50-minute documentary Tales of Offenbach by film maker Reiner E. Moritz. And it gives you a chance to enjoy this once celebrated opéra bouffe on your home screen, as an alternative to the classic Walter Felsenstein version. This is, surprisingly, one of the very few filmed version of Offenbach’s Bluebeard parody. 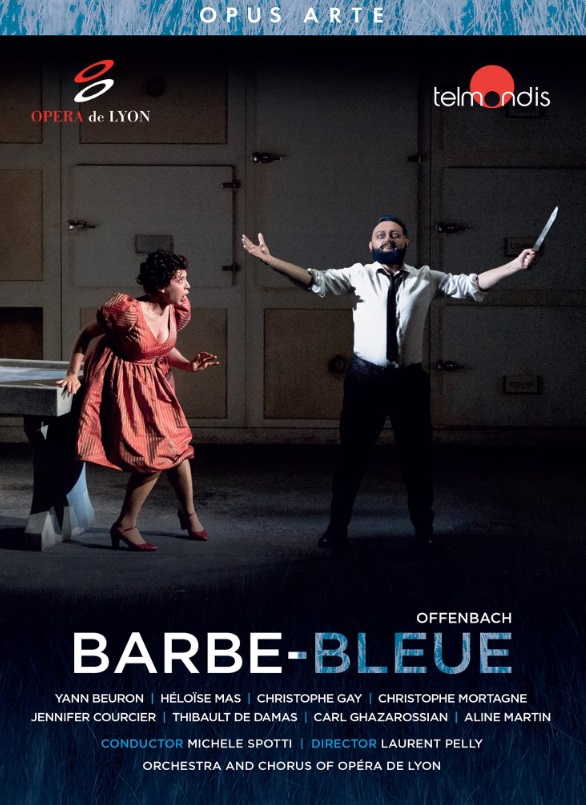 The DVD version of Jacques Offenbach’s “Barbe-bleue” from the Opéra de Lyon.

When Pelly’s production was shown on stage, Chris Weber went to see it and raved about it in an article for the Operetta Research Center. We re-run it here to whet your appetite for the DVD. This is what Mr. Weber wrote in 2019:

It is so easy to rip a performance apart. But what do you do if you see perfection? Alright, if I have to pick nits about this Barbe-Bleue at the Opéra Lyon there is the woman singing Queen Clementine, who has one lovely and poignant song about how she was taken as a 16 year old innocent and married the King, and has been miserable ever since. Somewhere there is a record put out by the old East German company of Offenbach songs sung by good singers I’d never heard of, and the sadness of her situation comes through so very well. On the same record, the great Karl Kraus, who put on one-man ‘performances’ of Offenbach in the German he translated himself in the 1920s and very early 30s, has someone sing his “Opportunisten Canzonette” about the bowing and scraping of the courtiers in the presence of the King, and also does a great job.

Last night, I thought of the cabinet officials of the current US president each in turn going around telling him and the world how great he was. You probably saw it. So some things never change. And indeed, that’s why a piece from 1866 still connects so strongly with audiences since.

But my mild criticism of the Queen last night only stands in relief against the excellence of everything and everyone else. I was so lucky to snag a wonderful seat: each of the remaining performances is sold out.

But luckily there were cameras set up. Opéra Lyon has put out DVDs before, and I hope this one joins those others. I only know that I was in heaven from start to finish.

Once in a great while you see something that makes up for the many mediocre performances which require you to bring your own imagination to fill in the many blanks.

I’ve lost count of how many times I’ve seen Barbe-Bleue since 1982′s East Berlin’s Walter Felsenstein production. That was like starting at the top. My first stand-up comedian was Chris Rock in 1997 trying out new material in a small club. “My God”, I said to myself: “what have I been missing all these years?”

But then as I saw other comics I realized how lucky my first experience had been. It’s been like that with Barbe-Bleue. I saw it last exactly six years ago when the late, great Nikolaus Harnoncourt conducted a semi-staged version in his home town of Graz, Austria. It was recorded and shown on Austrian TV.

At age 83, three years from his death in 2016, he was an institution. It didn’t hurt that he was descended from the Holy Roman Emperors: such things are important in Austria. But he made his name as a proponent of Early Music starting in the 50s.

But as he turned 80, he began to concentrate on sorts of music he loved; music that was far from what he was associated with. And being so highly venerated, he was able to do what he wanted. So, one of the last things he did was Ritter Blaubart as it is known in German.

He said that Offenbach was far too underrated as a musician and wanted to help his reputation. What I saw him do in 2013 was good, but Lyon Opéra last night simply was on another level. Everything meshed; it all came together in perfection.

I’ve now used that word three times, but I don’t know what else to say. I had to dig deep about that one singer to find any flaws at all in it. The director, Laurent Pelly, is apparently a big deal in France, but I had not heard of him. The conductor, Michele Spotti, was just perfect, as was his orchestra.

Overall, it was one of those far too few nights in the theatre where you feel lucky to be alive and where you are. And you feel: privileged.

I only hope the world can see this if they put out the DVD. And I know that seeing it live in the theatre is no perfect substitution for a DVD. But still, if it even captures half of the greatness I saw last night, I will be happy.

Whether it capture half the greatness, or more, is something you can now check out for yourself.

To read the full article by Chris Weber about his travels in France, where he also attended other operetta performances, click here.