Lydia Thompson [Eliza Hodges Thompson] is one of the theatre’s ‘legends’, and as in the case of other such legendary figures, the truth of her life and career has become, down the years, fictionalized to a stage where it was rather difficult to exhume the truth. But here it is. 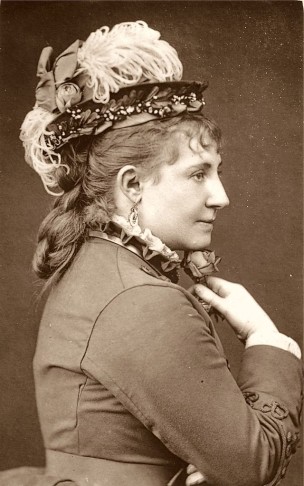 Lydia Thompson in a formal portrait.

‘Lydia’ was (in spite of all that has been written to the contrary) born in the parish of St Paul’s, Covent Garden, on 19 February 1838, the second daughter of Cumberland-born Philip Thompson, sometime publican of London’s ‘Sheridan Knowles’ public house in the now defunct Brydges Street, other-timesan account agent, other-times probably something else, and his wife Eliza née Cooper, previously the widow Griggs. Mythology says that mother Eliza was ‘a Quaker lady who was fond of the stage’. She was, in fact, whether Quaker or not, a pub landlady. Mythology also says, with meaningful whiffs of a gentlewoman in tight straits, that ‘Lydia went on the stage after her father died’. Well, that she certainly did, for Philip Thompson gave up the ghost in 1842, when Eliza junior was just four years old. Mother Eliza, however, with enormous promptitude, tied herself up with another publican, Edward Hodges of the Canonbury Tavern. Whose surname makes you wonder just whose child Lydia (like her younger brother, Alfred Hodges Thompson) really was. But the young Lydia wasn’t so precocious as to hit the stage at four. She was actually quite fourteen years old (and not ten or eleven as often related) when she joined the dancing chorus at Her Majesty’s Theatre in 1852. 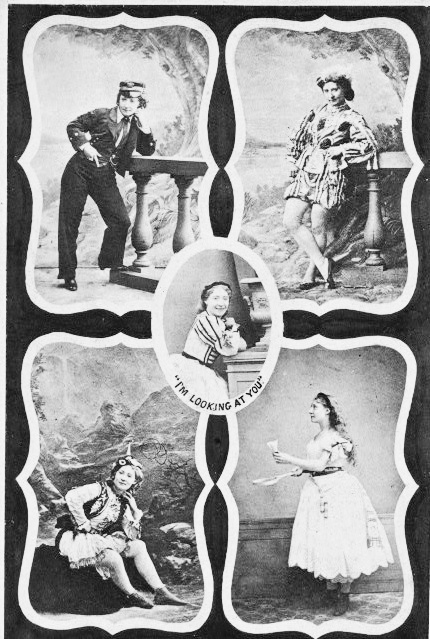 Lydia Thompson in a variety of different roles, cross-dressed and in women’s attire.

She appeared thereafter with the kiddie-show the ‘Living Marionettes’ at the Linwood Gallery (1853), but she first won critical and public notice playing the part of Little Silverhair (with pieces of silver thread woven into her hair) in the pantomime Harlequin and the Three Bears at the Haymarket Theatre at Christmas that year. In 1854 she featured at the Haymarket as a solo dancer in the Grand Oriental Spectacle of Mr Buckstone’s Voyage Round the Globe, before going on to play a season at the St James’s Theatre where her appearances included the burlesques Ganem, the Slave of Love and Charles Selby’s The Spanish Dancers in which she caused a small sensation with her imitation-cum-parody of the extraordinary Spanish dancer Perea Nina. At Christmas, she returned to the Haymarket in the title-rôle of the pantomime Little Bo Peep. 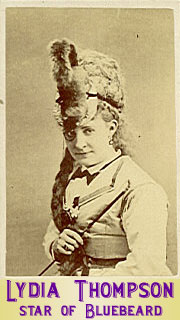 In 1855 she crossed to Europe and for more than three years performed her speciality dances before audiences which, if the reports are to be believed, included both Russian and German students who pulled her unhorsed carriage through the streets of Moscow and Berlin respectively in homage to her talent and sex appeal. She appeared billed as `first danseuse of the Drury Lane Theatre, London’, with obvious success both as an act and also as an interpolated item in such theatre pieces as Karl Gross’s Eine kleine Kur in Hungary (Budai Színkör), Russia (where she was ‘personally introduced to the Emperor’ and the St Petersburg Theatre burned down publicity-worthily during her stay), Germany (Berlin went mad for her ‘saylorboys dance’), Austria (where the Theater an der Wien produced a Schwank called Miss Lydia in memoriam), France, Scandinavia – ‘Miss Lydia Thompson the danseuse formerly well known in London has after a most wonderfully brilliant tour of Germany, visited Copenhagen (Casino), Stockholm (King’s), and lately astonished the good people of Riga, Finland, with her Highland fling, hornpipe &c. She is a favourite wherever she goes but Germany appears to be her trysting place..’ – and as far afield as Constantinople, before eventually returning to London. 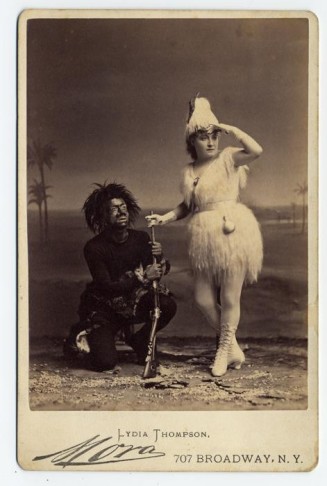 There she was re-engaged at the St James’s Theatre under Chatterton, where her rôles included `a Mysterious Stranger’ in Lester Buckingham’s Virginus burlesque, Valentine, the magician’s son (`who will introduce a Sailor’s Hornpipe, les Juinea, grand Pas Seul, and Pas Demon’) in the hugely successful ballet-farce Magic Toys, Dolly Mayflower in the drama of Black-Eyed Susan and Young Norval in the ballet-burlesque My Name is Norval. In 1860 she appeared at the Lyceum where she played again in her favourite vehicle, Magic Toys, as Abdallah, Captain of The Forty Thieves in the Savage Club burlesque, in the farce The Middy Ashore (‘in the course of which she will dance her famous sailor’s hornpipe’), as Fanchette in George Loder’s The Pets of the Parterre (Les Fleurs animées), in the drama The House on the Bridge of Notre Dame and at Christmas as Mephisto in the fairy extravaganza Chrystabelle, or the Rose Without a Thorn. In 1861 the Lyceum cast her in a soubrette rôle in the drama Woman, or Love Against the World in a comedy-with-dance-solo roles in The Fetches, and as Blondinette in Little Red Riding Hood, and in 1862 she mixed the dances and the plays with an appearance in the Brough burlesque The Colleen Bawn Settled at Last but, having married in 1863, she then took a little time off from the stage to give birth to the daughter who was to become the actress Zeffie [Agnes Lydia] Tilbury.

She was widowed fifteen months after her marriage when, whilst she was playing in The Alabama at Drury Lane, her riding-master husband was rolled on by his horse in a steeplechasing accident.

By that time, however, she was already back on the stage, In the years that followed, Lydia mixed London engagements with appearances, most often in burlesque, in the major (and some not so major) provincial towns. She made what would prove the most far-reaching such appearance at the Theatre Royal in Birkenhead in 1864, playing the burlesques Perdita and Ixion for manager Alexander Henderson. She subsequently played at Henderson’s new Liverpool Prince of Wales Theatre in a series of rôles including Brough’s Ernani alongside the Iago of Lionel Brough (1865), the title-rôle of the new burlesque Papillionetta, and Mercury in Paris (1866).

She returned to the West End at the famous Prince of Wales Theatre under Marie Wilton performing a ‘Rifle Dance’ as Max in the burlesque of Der Freischütz (1866).

She also appeared in pantomime and as Sophonisba in Drury Lane’s production of Delibes’ Wanted Husbands For Six (Six Demoiselles à marier), but for Christmas 1867 she again visited Henderson’s theatre in Liverpool where she appeared as Prince Buttercup in The White Fawn, Massaroni in the burlesque The Brigand and Prince Florizel in Perdita.

In early 1868 she created the rôle of Darnley in the burlesque The Field of the Cloth of Gold at the Strand Theatre. The show was a remarkable hit, but Lydia did not stay with it till its end. After 104 nights she quit the cast, and three days later she left England for America. Along with her went manager Alexander Henderson (to whom she was subsequently married), a trio of British burlesque actresses and a chief comedian, all of whom who within weeks would be famous. 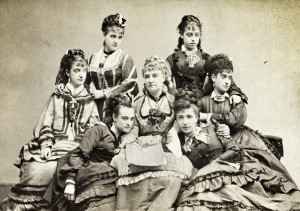 Lydia Thompson, surrounded by her troupe of “British Blondes.”

After a well-publicized arrival, Lydia Thompson made her first appearance on the American stage under the management of local manager Samuel Colville and of Alexander Henderson at Wood’s Museum and Metropolitan Theater, New York, on 28 September in Burnand’s burlesque Ixion. She made an enormous effect with her extremely sexy (but never vulgar) comic performances, her dazzling dancing, and her extraordinary merry and warm stage presence, Wood’s Museum became the hottest ticket in town and what had been intended to be a six-month tour eventually developed into one of more like six years. 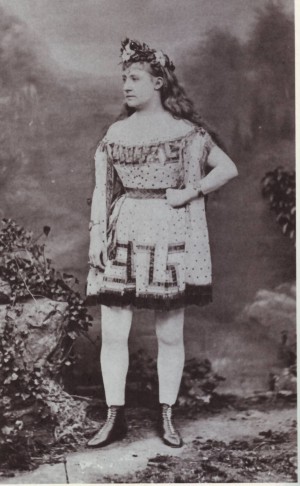 Within nights, Lydia Thompson became the unquestioned burlesque queen of her period, leading her company of ‘British Blondes’ (several of whom were not one or the other) around the country – with frequent returns to Broadway – playing pieces such as Ixion, The Forty Thieves, Bluebeard, Aladdin, Robin Hood, Kenilworth, Mephisto, Lurline, Sinbad, La Sonnambula, Robinson Crusoe, Ivanhoe a burlesque La Princesse de Trébizonde and Pippin (i.e. Byron’s The Yellow Dwarf). If the blondes’ trademarks were short trunks and shapely thighs, many of them were, however, by no means devoid of talent and several, including Pauline Markham, Alice Atherton, Camille Dubois, Carlotta Zerbini, Eliza Weathersby, Alice Burville and Rose Coghlan went on to fine careers. Amongst the male members of her company were such top comic talents as Harry Beckett, Bill Cahill, John L Hall, Willie Edouin and Lionel Brough.

Nevertheless, the company thrived – to begin with, at least – on a slightly scandalous reputation which Lydia’s managers fostered finely, winning nationwide publicity with the tales of her ‘lesbian attacker’ and of her public horsewhipping of the ungentlemanly proprietor of the Chicago Times who had published a piece reflecting on the virtue of the ‘blondes’.

In 1874 she returned to Britain and played in London and the provinces in Bluebeard, Robinson Crusoe, Piff-Paff (Le Grand Duc de Matapa), Oxygen, The Lady of Lyons, Pluto!, Carmen and other burlesque entertainments, but in the years to come she made regular return trips to America, where she remained a hugely popular and always newsworthy figure in the musical theatre. 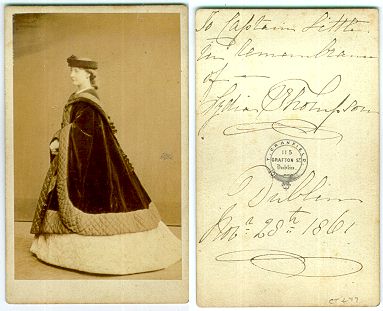 Her days of playing in burlesque were done when in 1887 she took a turn in direction and mounted a revival of Alfred Cellier’s comic opera The Sultan of Mocha in London, but her voice proved far from up to the task when she starred in the French vaudeville-opérette Babette (1888, Antonio) and in later days she found herself in no position to produce, and jobs harder to come by. Although she appeared in America in 1894 as an actress in The Crust of Society, and George Edwardes, hearing of her plight, used her briefly the following year in An Artist’s Model, she was badly enough off in 1899 for a benefit to be staged for her at the Lyceum Theatre. She made her last stage appearance in 1904. 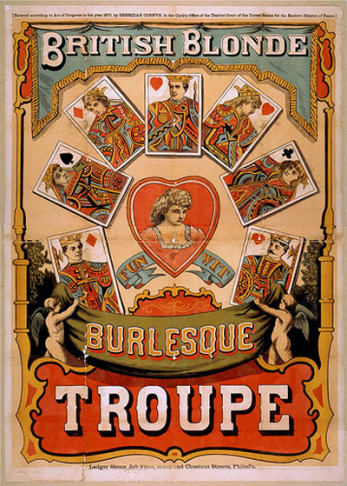 A phenomenon in the American theatre, where she gave general popularity to a superior brand of song and dance show with extravagant comedy which remained popular for many many years, at home she was – although recognised at her peak unqualifiedly as the ‘queen of burlesque’ – just one of a number of fine leading burlesque actresses of the period. However, her skilful management, the adept casting of her troupe, her knack for publicity, her own exceptional charms and talents, and the fact that she spent the most blooming of her blooming years on the American stage, built a special place for her in American theatre history.

Lydia’s half-sister, Clara THOMPSON [Clara Rose Hodges], one of the children of Edward Hodges and Eliza née Cooper, ex-Griggs, ex-Thompson, made a very considerable career as a vocalist and actress both under her own name and under her married name of ‘Mrs Bracy’ (she was the wife of tenor ‘Henry Bracy’ né Dunn), in Britain, Australia and America. Daughter Zeffie Tilbury played mostly in the non-musical theatre, but can be seen in a supporting rôle as the Princess in the Hollywood version of Balalaika (1939).

Several other theatrical Thompsons claimed, over the years, to be related to the meteoric Lydia, but it seems that Clara was the only genuine sibling to go on the stage.