Would Brother Jacob have been amused? In any case, the Parisian Opéra-Comique (with a hyphen, meaning the actual opera house, instead of the French opera genre with spoken dialogue, funny or not, which is written without a hyphen) is celebrating the bicentenary of Offenbach’s birth with a grand new production – after the composer, who spent many years playing the cello in the pit of this institution, learning everything there is to learn about musical theater, was kept away from the actual stage for the longest time. Only at the age of 41 was he allowed, in 1860, the present Barkouf there, the sinister story of a dog on the throne. This piece, as the recent revival in Strasbourg demonstrated, is a fabulous opéra comique. But because of censorship problems, illnesses, anti-Semitic press campaigns etc. it flopped originally. And Offenbach himself never set foot in the current luxurious, gold-glittering auditorium of the Salle Favart (as the house is officially called, even though no Parisian would call it that), because this third version of the Salle Favart wasn’t inaugurated until 1898. 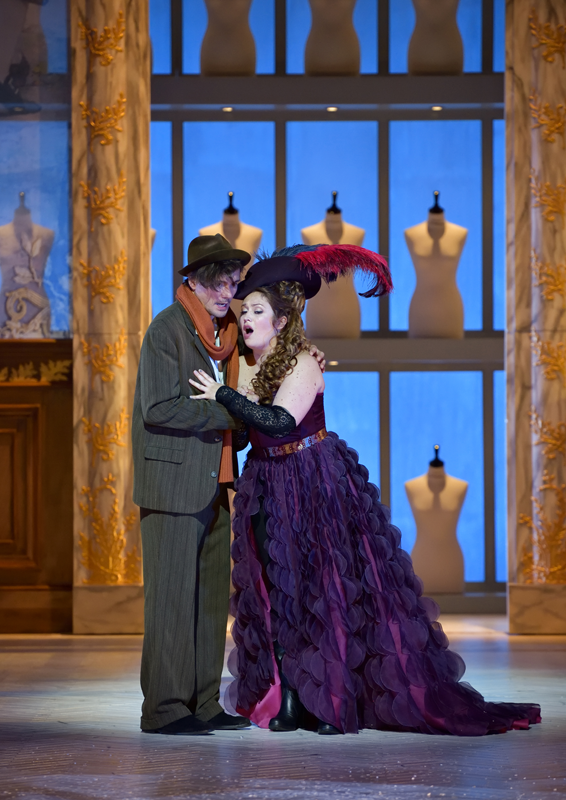 Who are the name-givers, the Favarts? He, Charles Simon Favart (1710-1790) was a theater author and opera composer who gave important impulses to the new “people’s” genre; he later took on the direction of the new theater. Today, his name is merely remembered by a few theater historians. His lasting contribution to opera history is that he wrote the direct libretto precedent for Mozart’s youthful Bastien und Bastienne. 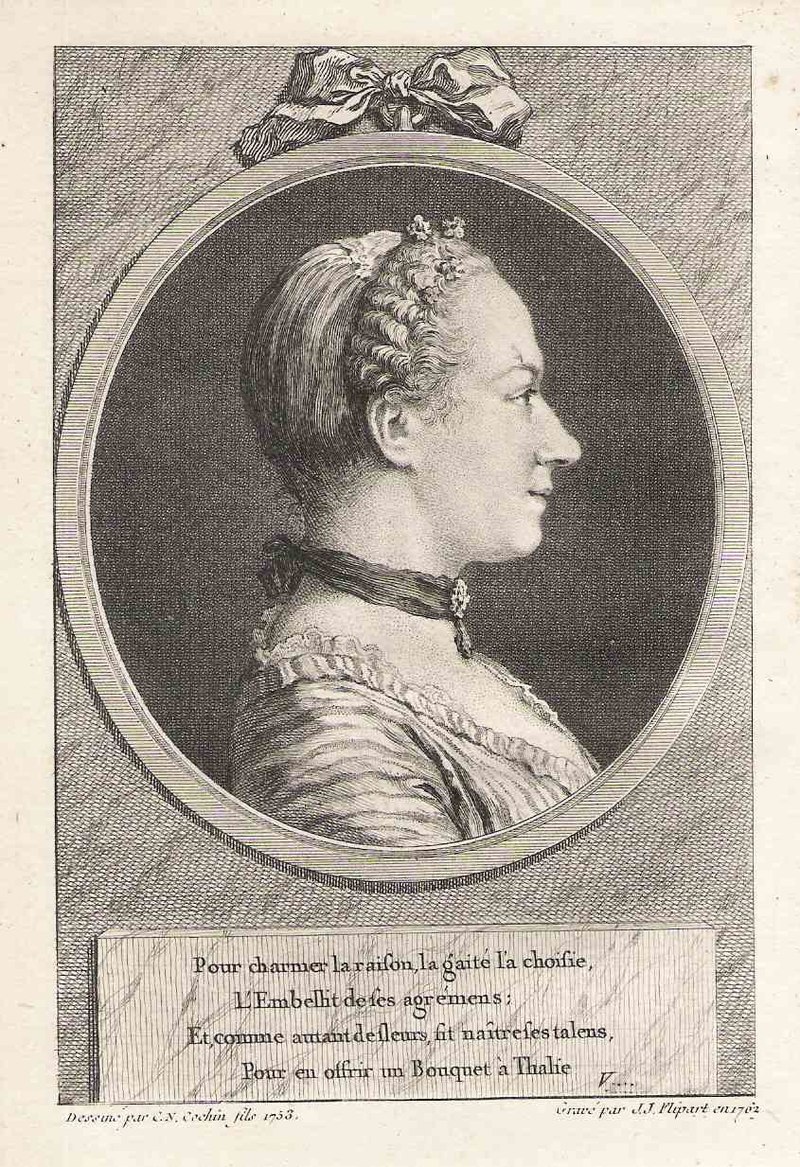 His wife, Justine Favart (1727-1772), was not just the co-author of his plays published in 10 (!) volumes; she was also an important and versatile actress. She was one of the first to wear costumes that fit the roles, so she did not play a shepherdess in a silk evening gown. That must be the reason why Anne Kessler, actress at the Comédie Française, in her debut as stage director re-located the entire story of Offenbach’s Madame Favart to the tailor’s workshop of the Opéra-Comique. As a three-story iron construction this forms the set for the entire production. (How original!) 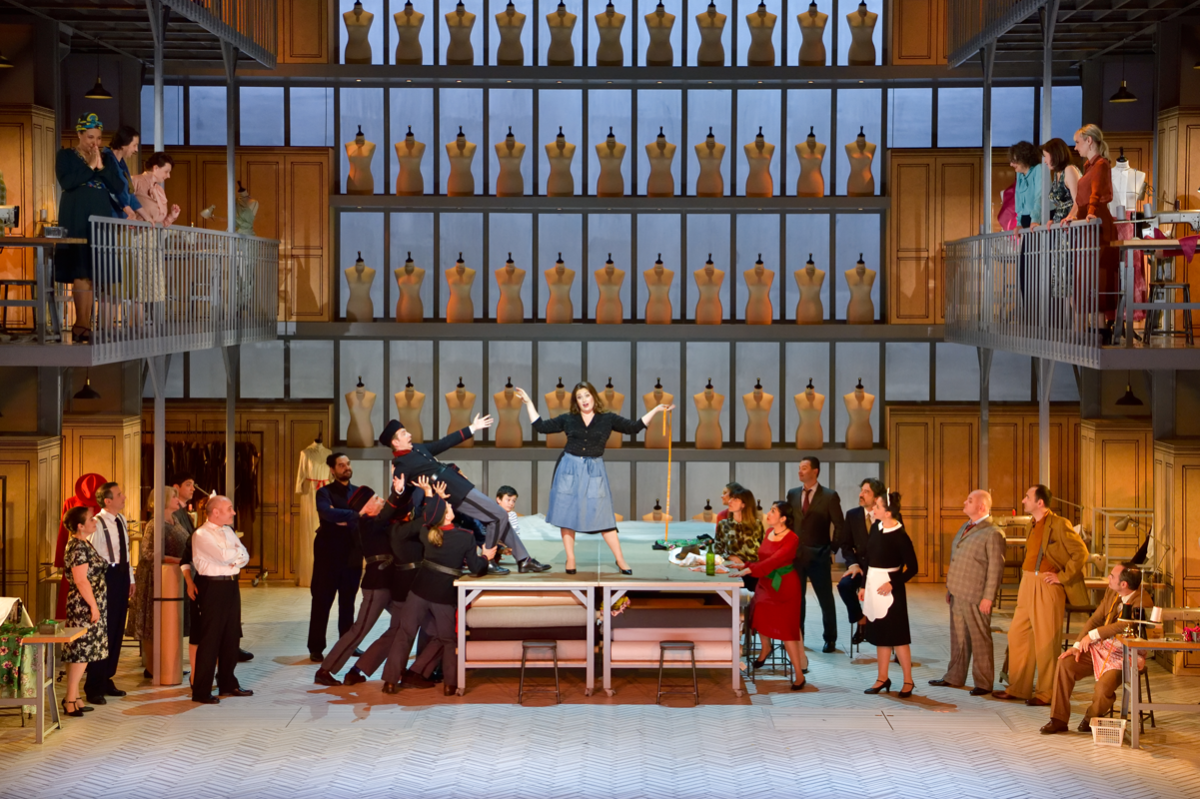 This late Offenbach piece is one of his nostalgic and romanticizing opéras comiques, which did not actually premiere at the Opéra-Comique, but at the Folies-Dramatiques in 1878. Presenting the show now, as a festive birthday event – co-produced with the Palazetto Bru Zane foundation – is a kind of celebration of the theater’s own history, and maybe a belated atonement for past neglect of Offenbach. It could have been a bit more inventive as a production, if I may say so.

On the positive side there is the sparkling conducting of Laurent Campellone who creates an opulent champagne mood with the Orchestre de Chambre de Paris. This is a highly rhythmic, bouncy and feather-light Offenbach sound that caresses the melodies, the waltzes and the gallops.

It’s a colorful score with a libretto by Alfred Duru and Henri Chivot, a lot more restrained (in terms of naughtiness and obscenity) than other Offenbach shows, with a exuberant cake maker’s aria and a wine grower’s aria, a quartet reminiscent of Mozart and a crazy Tyrolian duet. There are delicate buffooneries, disguise scenes, Rococo allusions and an out-and-out tenor aria for the buffo (Éric Huchet as the preposterous, testosterone-driven Marquis de Pontesablé). But for the most part, Offenbach is slightly sentimental here, trying to win over the new bourgeois audience who were not as liberal minded and fun-seeking as his high-class fans in the Second Empire. Offenbach celebrates the happiness of domesticity, and almost (but not entirely) leaves out his notorious frivolities. 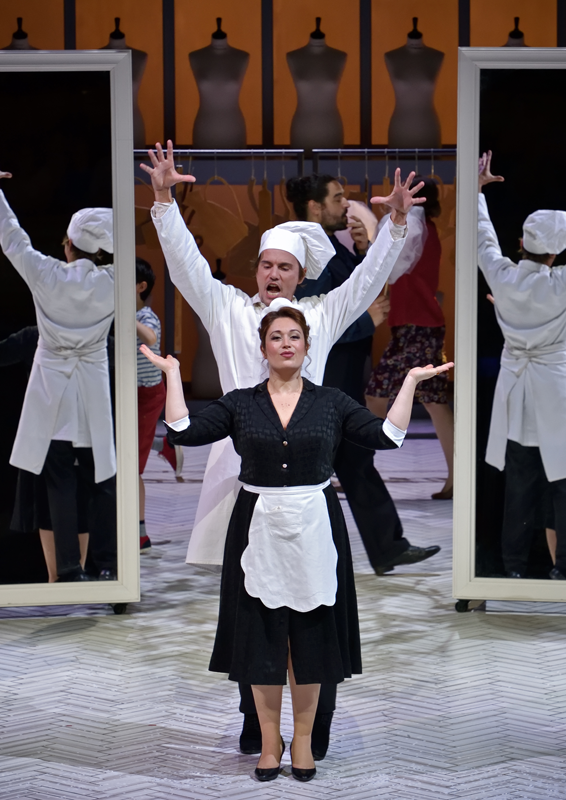 There’s a secondary couple, Suzanne and Hector, who want to get married but are persecuted by the Marquis de Pontsablé, he’s after Suzanne’s virginity; at the same time he works as detective for the Maréchal de Saxe. A jovial innkeeper and a stuffy father compliment the group of vulgar characters that turn the three acts into a veritable farce – with lots of funny hide-and-seek moments.

As I already mentioned, in this Opéra-Comique production everyone has the pretend that they are stepping back into a tailor’s workshop, trying on the costumes of their roles instead of actually playing these roles. Some wear flowery crinolines that also serve as monstrous flower bouquets and chandeliers – don’t ask me why. 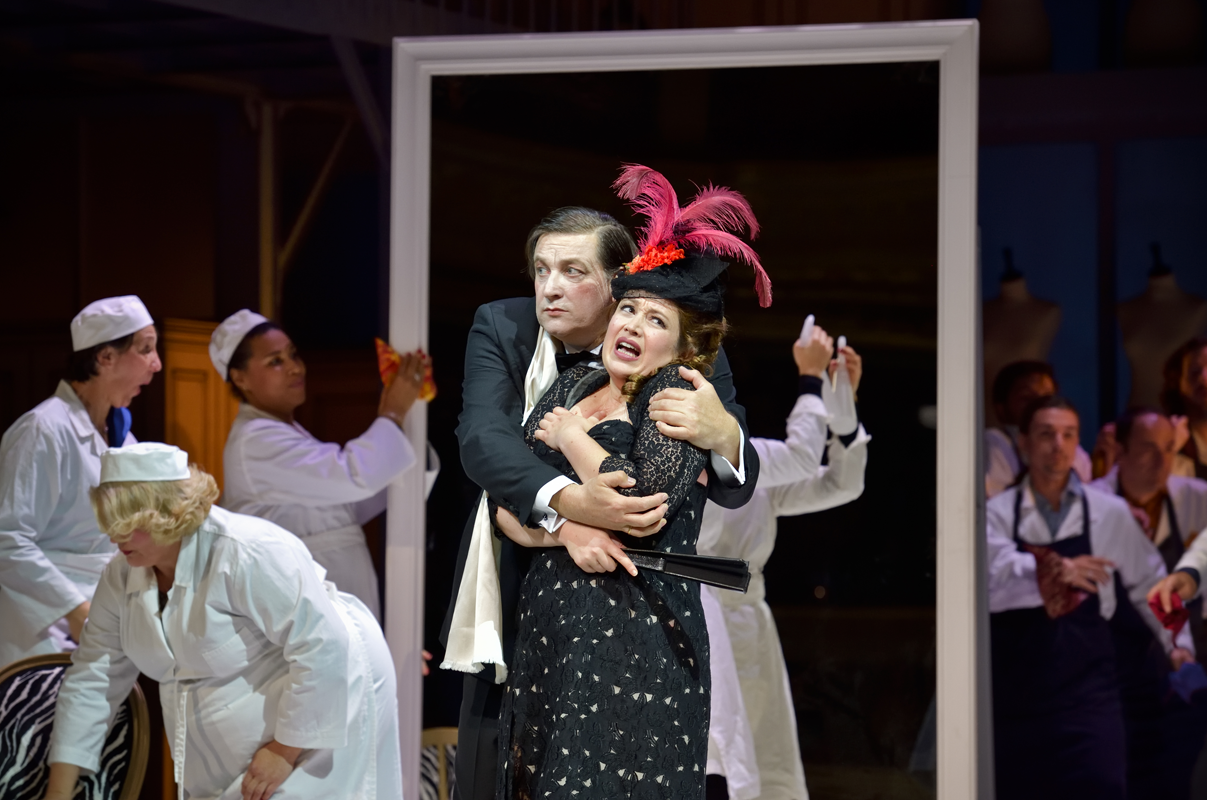 Anne Kessler has quite a few such distracting ideas. She should have focused, instead, on directing the actors better and getting the dialogue off the ground. Instead, this dialogue is presented very à la française in a permanently exaggerated way, with screaming almost throughout. It’s not particularly gracious. But in the end, after the hunted Madame Favart performs for Louis XV and creates a sensation, her husband is granted the license to open the Opéra-Comique; and in the final scene a giant see-through image of the present-day foyer of the Salle Favart comes down.

Marion Lebègue is Madame Favart, a sturdy middle aged comedienne, more down-to-earth than intellectually refined; she’s especially convincing as the wicked aunt, and she sings with a robust mezzo soprano voice. Christian Helmer is her husband, with a nondescript bass. François Rougier as a career orientated military man called Hector offers a pleasant tenor and agile acting. Which allows beautiful soprano Anne-Catherine Gillet as Suzanne to steal the show from everyone even though she’s only a secondary character in this story. 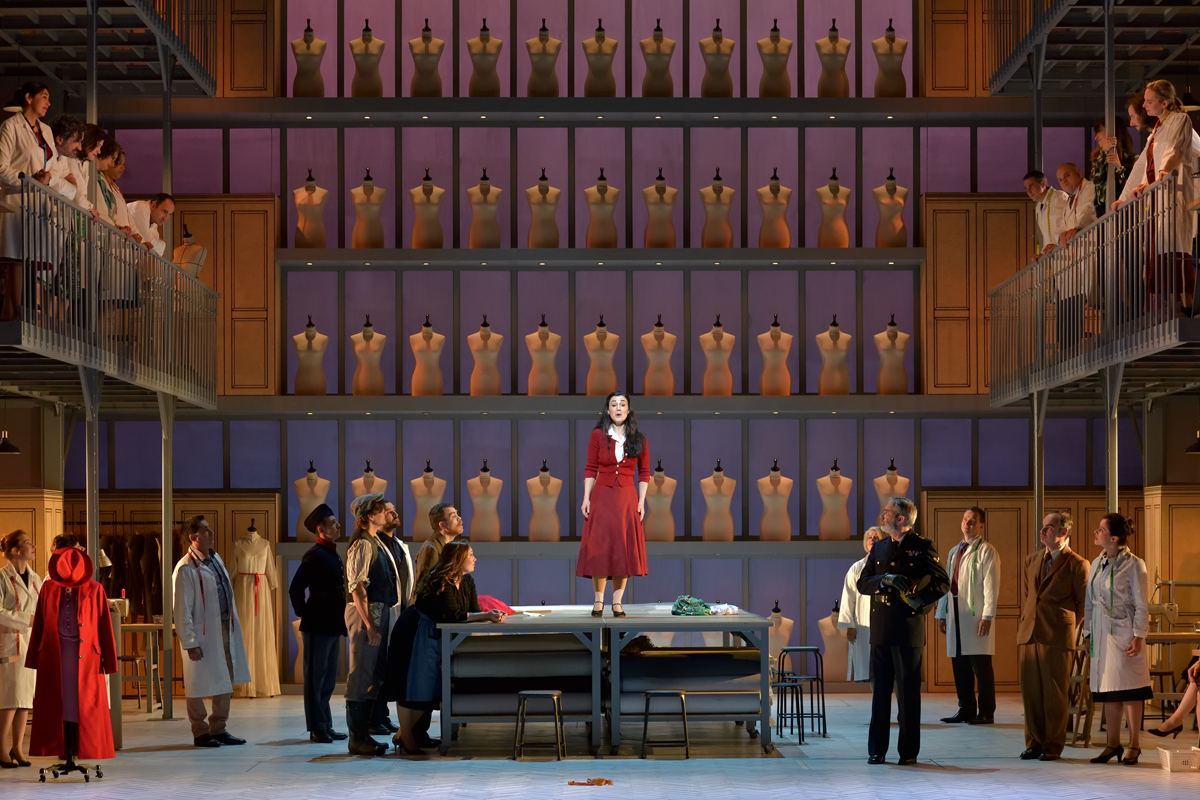 The mad-cap Éric Huchet was also in Maître Péronilla three weeks ago, a Spanish flavoured opéra bouffe that premiered in 1878 as well, but before Madame Favart. Palazetto Bru Zane presented it in a concert version for their 2019 Paris festival, brilliantly conducted by Markus Poschner; it was recorded for CD.

Thus, you have two unknown Offenbach pieces from the later part of his career in revivals in Paris. Which is an interesting selection to mark the bicentenary, even if Madame Favart was not the preferred choice of Palazetto Bru Zane. The production will move onto Limoges and Caen.