The art of the suggestive song is not restricted to any particular historic era; it is, however, limited to a certain kind of performer: a performer who is able to transport the fun of being suggestive, who can make you understand what the ‘real’ meaning is, and a performer who has that cheeky undertone in his or her voice. There are many ways such suggestiveness can be achieved, and obviously the approach has changed over time. Also, the songs have changed. Sometimes to double entendre is more explicit, sometimes it’s more sophisticated and hidden, sometimes it’s downright pornographic, sometimes it’s jaw-droppingly awful. Many famous performers past and present have excelled in the art of suggestive singing, be it Hortense Schneider in 1860s Paris, Fritz Reutter or Fritzi Massary in 1910s and 20s Berlin, be it Cole Porter in the 30s and 40s, or later artists such as Detlev whose Detlev’s Schwulitäten LP from the 1970s can really make you gasp, with delight. Now, the label BOBBY Music has released a CD entitled Männe, hak’ mir mal die Taille auf! which is a collection of 18 cabaret songs by famous operetta composers, all of them supposedly suggestive, and all of them from pre-WW1 times, all of them newly recorded by modern-day classical singers with so called “legit” voices. 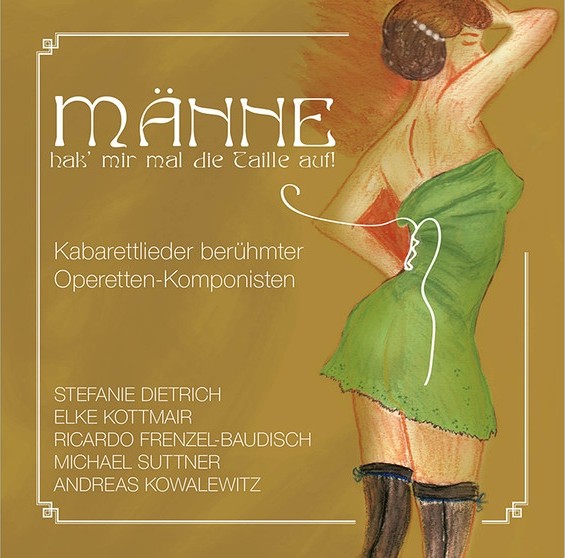 What you find in the delicious song list are compositions by Jean Gilbert, Franz Lehár, Victor Holländer, Ralph Benatzky, Oscar Straus and Paul Lincke. The songs have glorious titles such as “Ich denk mir nichts Schlimmes dabei” (I am not thinking anything bad while doing this) or “Dirnenlied” (Song of a Whore), and they deal with “Moderne Treue” (modern fidelity), among many other topics.

The songs were selected by Stefan Frey and Wolfgang Aschenbrenner, and recorded at the Funkhaus München, Studio 2, for the Bavarian Radio. At the piano, there is Andreas Kowalewitz.

There four soloists – two male, two female – who make sure there is a variety of styles and vocal colors: Elke Kottmair, Stefanie Dietrich, Ricardo Frenzel-Baudisch, and Michael Suttner.

What is immediately evident, from track 1 onwards (“Herr Meier, wo bleibt denn bloß mein Reiher?” by Jean Gilbert, 1912), is that these singers might have pleasant voices, but none of them is ever vocally suggestive. Not in a way that would make you smile at the lyrics by Julius Freund, Welisch & Bernauer, Fritz Grünbaum and others. It’s as if this entire dimension is missing from the delivery here. And, there is a pronounced lack of character in the voices, acoustically speaking. There is, all in all, too much of a ‘chaste’ approach to these cabaret works: it’s as if some modern singers decided to dutifully record some historically relevant material, without having any real connection with it. To get back to the aforementioned Detlev: the way he sings about cats sitting before a “hole” waiting for the mice to devour is not something you’ll find on these recordings from Munich. Which is sad, because many of the songs could probably be very funny. And they are definitely interesting.

There are some first-time-on-record tracks, e.g. Benatzky’s “Colombinens Untreue” or his “Kux and Aktie.” But if you compare the version presented here of Benatzky’s “Piefke in Paris” with the recording made by Daniela Ziegler and Adam Benzwi, years ago, you realize what is lacking.

I personally enjoyed the tracks with young tenor Ricardo Frenzel-Baudisch most. He is very flexible, vocally and stylistically, and he has a great naturalness in his singing that points towards musical comedy – rather that “I am an opera singer and will now sing cabaret lieder.” His “Marquise von Lavalliere” (Benatzky) can actually compare and compete with the Ziegler/Benzwi version.

There are also various English language tracks, e.g. “I’ve got rings on my fingers” by Maurice Scott/Julius Freund (1909), “The rest of the week she’s mine” by John W. Bratton/Chas. H. Taylor, and “Who paid the rent for Mrs. Rip van Winkle?” by Fred Fisher/Alfred Bryan.

The four soloists presented these songs in a concert too; and I hope the program worked better live and with an audience. After having browsed through the 1970s selection of various suggestive recordings in the archive of the Schwules Museum* recently (e.g. Werner Röglin’s “So ein Tratsch” set to Strauss’ Tritsch Tratsch Polka), I find it hard to fully appreciate these stale modern interpretations that are neither truly historic, nor truly modern either. 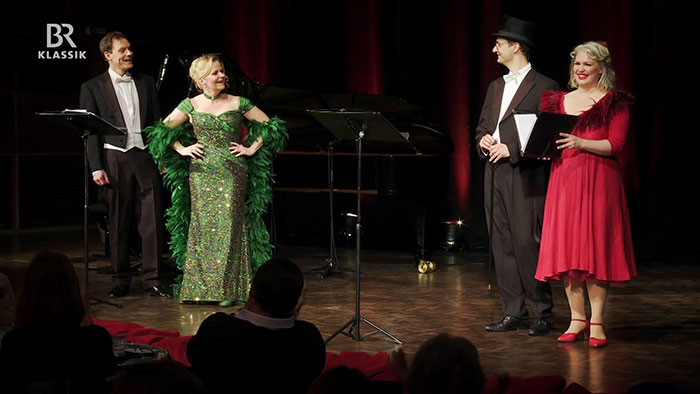 There is a booklet with an essay by Stefan Frey, explaining the background of all the songs. But the essay is only printed in German, and there are no lyrics in the booklet, neither in English nor in German.

On the plus side, it is reassuring to notice that the operetta world in Germany is exploring new, comparatively unknown repertoire. And, also, that young artists are interested in “erotic” songs again. I am saying “again” because, originally, that used to be all that operetta artists were ever interested in. When that stopped, after 1933, the art of suggestive singing was somewhat lost in the realm of operetta. It lived on elsewhere, right to this very day, if you think of Lady Gaga, Madonna, Georgette Dee, Desirée Nick and others. The challenge for the future is to bring these two worlds back together again. This disc, Männe, hak’ mir mal die Taille auf! is a first attempt with mixed results. But they point in the right direction.