It’s a small book, but full of interesting content: Swing tanzen verboten. Unterhaltungsmusik nach 1933 zwischen Widerstand, Propaganda und Vertreibung. If that title rings a bell, that is because there was an exhibition in 2014 in Linz at the Tabakfabrik, curated by Marie-Theres Arnbom. She is also the writer of this book, published by the Armin Berg Verlag. 200 pages with some lesser know aspects of operetta history, e.g. “Letzte Zuflucht Shanghai” (last escape Shanghai). 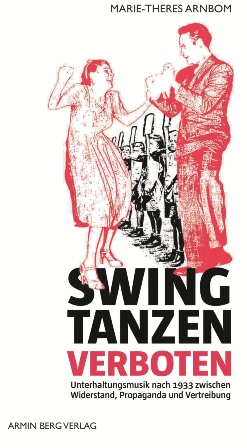 If you know the writings of Marie-Theres Arnbom, or the catalogue of the Vienna operetta exhibition at the Theatermuseum (Welt der Operette), or various essays from this research website, you will recognize a lot of recycling – of quotes, phrases, particular facts. But that does not have to be a bad thing, necessarily. Because in this book version, the very complex story of operetta in general, “degenerate” jazz operetta in the 1920s in particular, and operetta after 1933 is broken down into various short chapters of two to four pages. They are like spotlights, dealing with a very broad spectrum of topics. There are chapters on operetta in London – from Fritzi Massary in Noel Coward’s Operette (1938) to the Blue Danube Club to Ivor Novello’s Dancing Years and the appearance of Nazis taking the hero (Novello) off to prison. The song “Countess Mitzi” from the Coward show was popular with later sopranos too, Joan Sutherland among them.

There are many photos, throughout. All of them are b/w, and the print quality is not luxurious. There are very limited picture captions, which is a shame, because in this historical context as much info as possible would have been welcome. As for the layout, that is on the DIY side. But still, it’s a wonderful introduction to artists such as Béla Laszky (1867-1935) and many other often overlooked people.

While talking about concentration camps, Arnbom also discusses the Dutch camp Westerbork and Willy Rosen and Max Ehrlich. She also includes, in that chapter, Otto Wallburg and Camilla Spira from the original Weiße Rössl cast, who were both deported to Westerbork – and performed Rössl there.

Talking of The Netherlands: Johannes Heesters and his infamous visit to Dachau is also included, with photos.

You’ll recall that he and the Gärtnerplatz ensemble Munich were invited to Dachau to perform that other Benatzky operetta, Axel an der Himmelstür, for the camp officers.

At the back of the book, there are 50 pages of short biographies.

This is obviously a topic – 40 years of operetta history, spanning from roughly 1910 to 1950 – that would deserve a large size book, with expanded essays on each aspect only briefly dealt with here, and with larger and more historic images. It’s a task a small publishing house like the Armin Berg Verlag cannot fulfill. So one should be thankful that this little paperback packs in so much information that is easy to read … you can start with any chapter!