The aspect that initially drew my attention to this brand new re-release of The Merry Widow in “hi-fidelity stereo” was Lisa della Casa in a “pretty in pink“ outfit on the original 1962 cover, re-used here for the CD. She looks as if she’s about to step onto the set of Mad Men – and what a Prince Danilo Jon Hamm would make! Instead, you get Metropolitan Opera “star” baritone John Reardon as Danilo Danilowitsch, which is very different. But you also get Tony Award winning Franz Allers conducting, the musical director of the original My Fair Lady and Camelot. He lifts the score off the ground in a rather unique way. 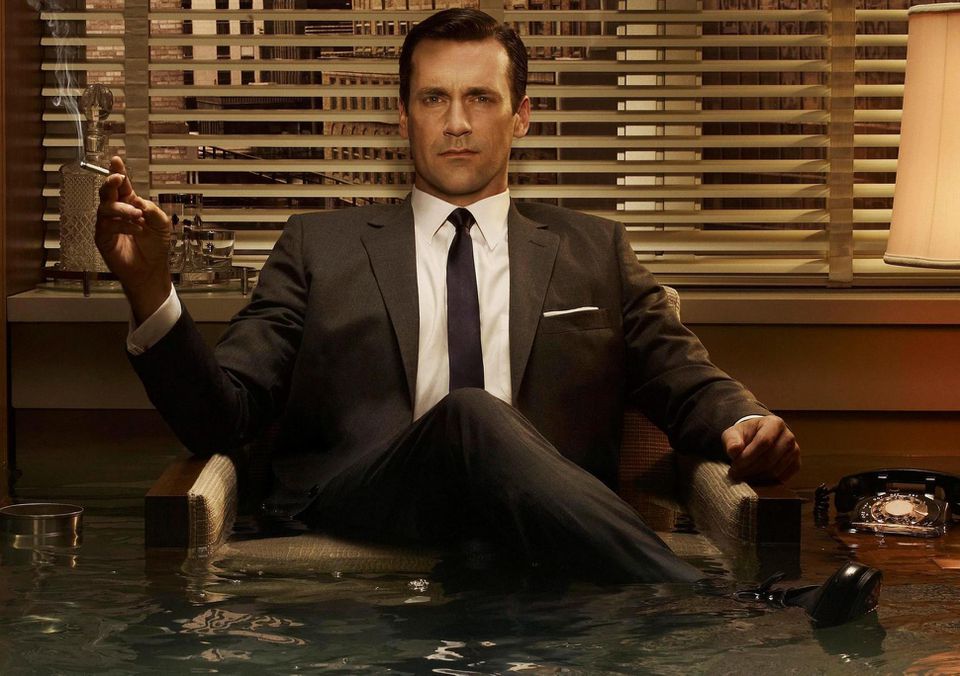 This being the early Sixites and the USA, you get an interpretation in sync with the notorious Richard Traubner definition from Operetta: A Theatrical History: “Flowing champagne, ceaseless waltzing, risqué couplets, Graustarkian uniforms and glittering ballgowns, romancing and dancing! Gaiety and lightheartness, sentiment and Schmalz.” This is already evident in the translation used, it’s by Merl Puffer and Deena Cavalieri, “with reminiscences of earlier translations” by Christopher Hassall and Adrian Ross, as Kurt Gänzl writes in The Blackwell Guide to the Musical Theatre on Record (1990). 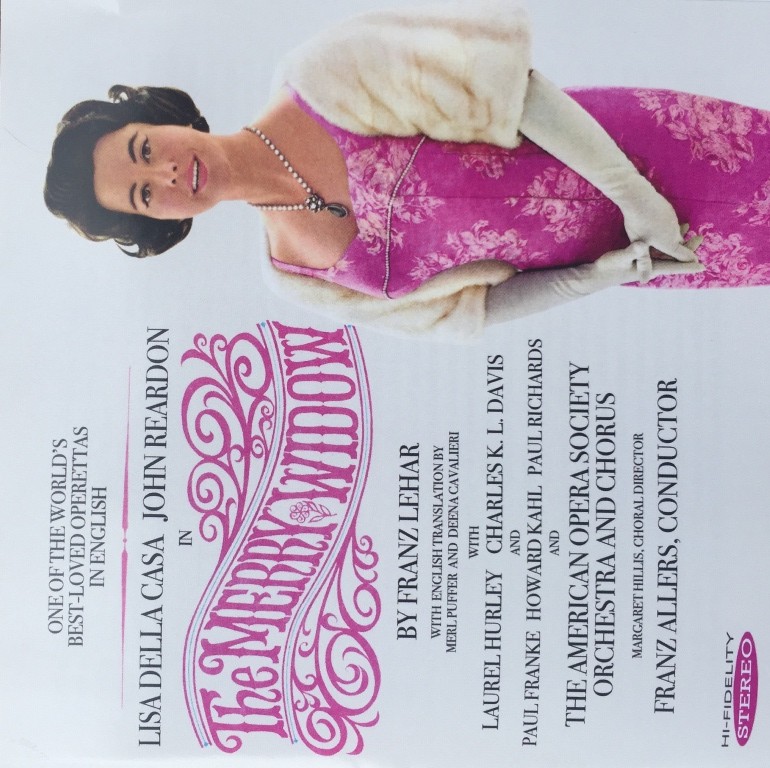 Lisa della Casa on the cover of “The Merry Widow” re-release by Sepia Records.

Mr. Gänzl claims that della Casa “mixes a smoothly accomplished voice and a certain amount of sprightliness;” but always with that polished and distanced 1960s “hairspray glamour.” Della Casa has obviously not studied famous predecessors in the way her rival Elisabeth Schwarzkopf did for her EMI recordings, so there are no hints of Mizzi Günther or Fritzi Massary to be heard here. Which is a pity, putting Schwarzkopf in a different league altogether, also with regard to her handling of the words. (Admittedly, Schwarzkopf has the original Victor Léon-Leo Stein libretto to sing, which is also in a different league than the watered down new English version.)

But della Casa sings a luminous “Vilja,” and she sounds ravishing throughout, with an interesting way of breaking the vocal lines with natural sounding parlando.

On the original vinyl release, Franz Allers wrote the liner notes, claiming “Part of The Merry Widow charm may be its cosmopolitan atmosphere; it does not concern Viennese people, but citizens of the mythical Kingdom of Pontevedro, and those citizens’ doing at their embassy in Paris. The story is as cosmopolitan as Imperial Vienna itself, not the sentimental ‘City of My Dream,’ but the city of glamour, passion and intrigue.”

Truer words have rarely been spoken. And Allers’ conducting certainly has a lot of glamour, with noticeable sensualness (e.g. in the love duets between Valencienne and Camille, with languorously floating solo violins), but also with a forward bounce and crispness that is refreshing. Sadly, in 1962 the record company CBS thought that “glamour and passion” should translate into hiring soloists from the Metropolitan Opera. You get Laurel Hurely as Valencienne who performed Musetta at the Met, and you get Hawaiian tenor Charles K. L. Davis as Camille, who sang in Don Giovanni on television with Leontyne Price. The rest of the cast are also Met regulars.

A commemorative plaque for Franz Allers at the Bayreuth Festival where he worked in 1927 before becoming a famous Broadway conductor. This plaque was part of the exhibition “Verstummte Stimmen – Die Bayreuther Festspiele und die ‘Juden’ 1876 bis 1945.” (Photo: Christian Michelides / Wikipedia)

Can you imagine what this album would have sounded like if Allers had brought Rex Harrison or Richard Burton along to sing Danilo, and Julie Andrews as Hanna? And Olga San Juan (from the original Paint Your Wagon) as Valencienne – with this glorious backing by The American Opera Society Orchestra & Chorus? Well, it didn’t happen.

As Kurt Gänzl says: “Since all the other values are well cared for, from a clear-voiced group of rather young-sounding Pontevededrian diplomats to an agreeably unforced orchestra under Franz Allers, this comes out as one of the most accomplished of the English-language recordings.” On the cover of the new Sepia Records CD we read: “One of the world’s best-loved operettas in English!”

Allers conducted The Merry Widow again at the New York Lincoln Center revival two years later, in 1964, with Patrice Munsel mixing “some semi-spoken lines which sound more like Mae West than Merry Widow with a lusty, true soprano in a performance that may not be kosher but is really effective,” writes Gänzl. Bob Wright is her Danilo: “a little mature, but in a fine, dashing portrayal in the healthy American line of unplummy baritone heroes.” Add to that the “Women” team performing “lustily.” I wish Sepia would re-release that album as well, just for comparison.

There are a few more English language Widows around, the famous Decca version from 1950 has Wilbur Evans as a “splendid pre-operatic” Danilo and Kitty Carlisle as Sonia/Hanna (“enjoyably natural, transposed down and without top notes, which maters less that you would expect”).

And, yes, there’s also the 1977 version with Joan Sutherland doing mad-scenes with Lehar’s music, which is a one-of-a-kind recording and as such special (also the orchestrations and conducting).

With all that said, Lisa della Casa brings a superstar glow to her performance and such poised singing (and such gentle top notes) that it’s good to have her Hanna Glawari on CD again. And it’s certainly a treat to hear the way Franz Allers handles this music in the “cosmopolitan” way it deserves, with all these lush orchestral details and with such natural flair, instead of the heavy-duty efforts of later conductors such as Herbert von Karajan or Franz Welser-Möst trying too hard to “lift” the music to “higher” classical regions. Where they do not belong.

Why the new Sepia release has to finish with two “Ave Marias” sung by Lisa della Casa – with the choir of the Hamburg State Opera – remains a puzzle. It certainly kills the spark with which Allers finishes the act 3 finale. (Is this to be something like an alternative “Vilja”?)

What is still needed is a recording of the original London and the original Broadway version of The Merry Widow. Both were hugely successful, both had slightly different music (such as “Butterflies” as a dance number and the comic “Quite Parisian,” included on the Sutherland disc). Both versions are completly ignored by modern-day conductors and stage directors, as if it were too much effort to do a little research and invest work in reconstructions.

At least Truesound Transfers have released the original 1905 Vienna cast album and the 1907 original Berlin cast, they might serve as role models for any Franz Allers of today – in both cases the Danilo is pretty close to something like Jon Hamm doing Lehar. Just saying. (To read more on that Truesound Transfers album, click here.)