Anyone seriously interested in Offenbach will also be interested in Meyerbeer, and the various other composers successful in the first half of the 19th century. Their music is what Offenbach deconstructed and used as the basis for his own operas bouffes. So a grand revival of the once grand operas should be noted by operetta fans. Most certainly when the work in question of Les Huguenots, one of the most popular operas of its time, that inspired Offenbach to write one the most breathtaking finales of his entire oeuvre, in Ba-ta-clan.

Giacomo Meyerbeer, engraving from a photograph by Pierre Petit.

The Deutsche Oper Berlin is continuing its Meyerbeer cycle next season with this 1836 Meyerbeer blockbuster, after having already presented Vasco da Gama (L’Africaine) and the pastoral Dinorah. (The latter thankfully as a concert performance, without any of the usual wild stagings the company has become notorious for.) So, now follows part 3.

It will be a production by David Alden – which is the bad news first. The exciting news, however, is that Juan Diego Flórez will sing Raoul de Nangis, the Protestant gentleman. That is spectacular and inspired casting one would wish to hear more often at the DOB.

His partners for this production – which opens on November 13 – are Patrizia Ciofi as Marguerite de Valois, Queen of Navarreand Olesya Golovneva as Valentine, daughter of Le Comte de Saint-Bris, a Catholic gentleman. Other highlights in the cast include Jana Kurucová as the page boy Urban. Ante Jarkunica will be Marcel, who gets the big “Piff Paff” number that Offenbach referred to, again and again. (Most famously in Gerolstein.)

There will be eight performances altogether until February 2017. They offer a chance to hear the famous Luther chorale ensemble (“Ein feste Burg ist unser Gott”) and the following duet in which the lovers Raoul (Catholic) and Valentine (Protestant) pray to the Lord above, just before they storm off to be die together, as their idea of a “Liebestod.”

Offenbach used this Luther chorale in his “chinoiserie musicale” Ba-ta-clan (1855) where a group of French citizens stranded in China sing it – in a very different way – while they await their execution by revolutionary forces; only to be spared and sent back home to Europe the very last minute. 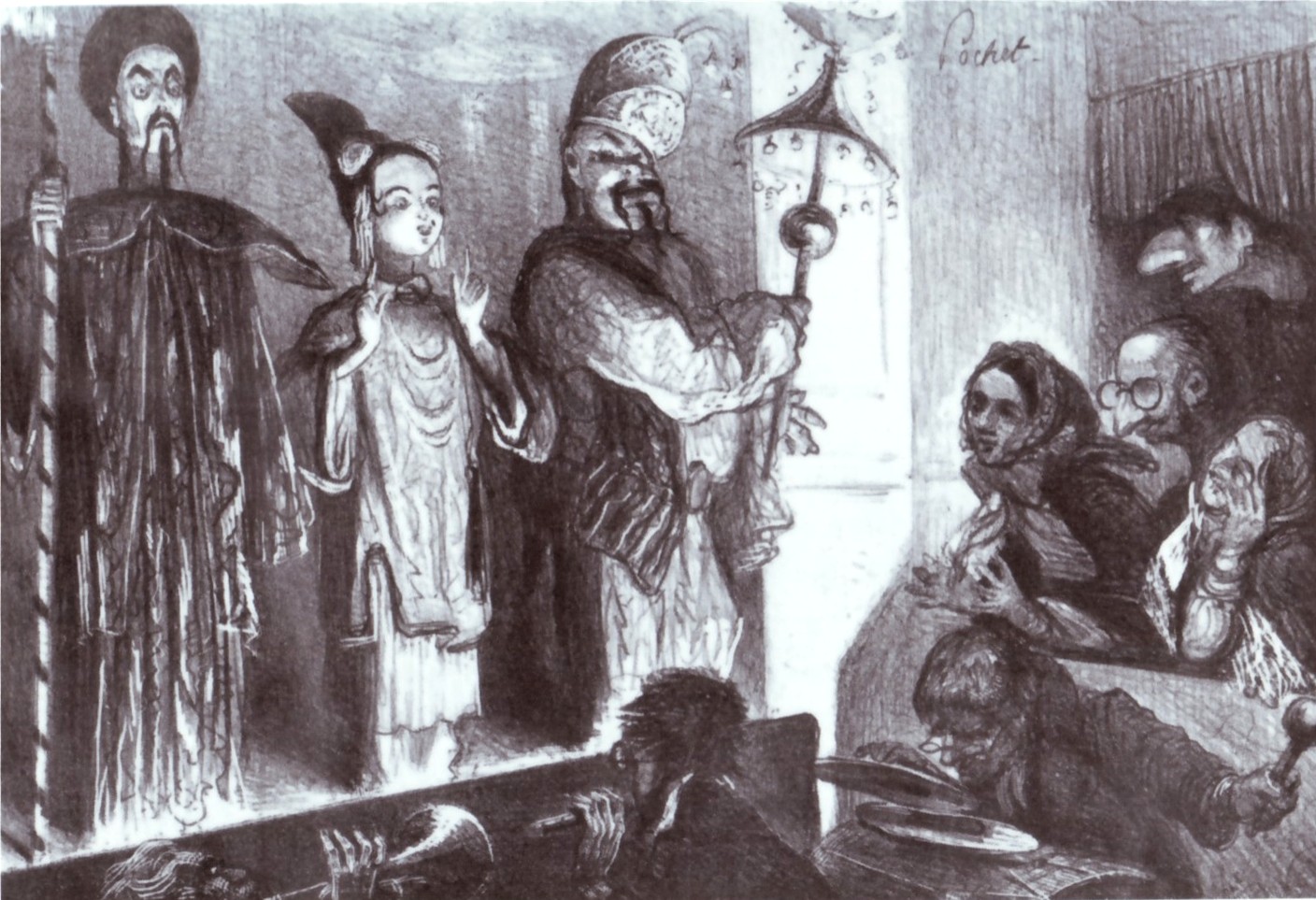 The protagonists of Offenbach’s “Ba-ta-clan” awaiting their execution; original 1855 production.

Last year, the Ba-ta-clan achieved a different kind of notoriety when Islamic terrorists blew up a Paris discothèque originally named after this Offenbach show; as a gesture against Western decadence.

In the following season, the Meyerbeer cycle at the DOB will come to a close with a new production of Le prophète. Interest in other French operas from that era has not been voiced yet, sadly.

By the way, there was a very famous Huguenots production at the Deutsche Oper Berlin in 1987, staged by John Dew and starring the young Richard Leech as Raoul, as well as the late Pilar Lorengar as Valentine (she was later replaced by Lucy Peacock). It will be a challenge for the new production to make forget the vocal splendor of that old production, as well as the visual brillance of some of the old scenes, e.g. the notorious swimming pool episode. It was conducted by Stefan Soltesz, who many will remember from his recent operetta outings at the Komische Oper.