If you like Burlesque – in its historical form – you might enjoy Hostel Hermannstraße as performed by Ades Zabel and his cross-dressing company at the BKA in Berlin very much. Because those actors revive an old tradition, and they give it a brand new 21st century meaning. It’s fun to watch them turn classical gender roles for men and women upside down, and celebrate the process of doing so with rousing music, ranging from Andrea Berg “Schlager” to “Happy” by Pharrell Williams. 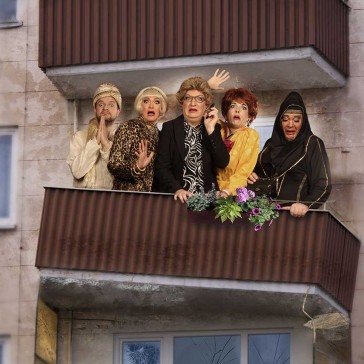 You might remember operetta diva Lydia Thompson and her British Blondes. When she went to America in the 1860s to perform Ixion – a romp set in classical Greece where all the male characters were performed by actresses, and the one female character was performed by a man, Miss Thompson’s husband – she caused a theatrical sensation. Audiences flocked to see this gender-bending way of performing, especially because the ladies on stage were so totally not like “respectable” women were supposed to be. In a time when women’s role in society was seriously being re-defined, the British Blondes showed the world what “power girls” can look and act like – by taking on male parts and showing men an emancipated parody of themselves. The music for Ixion and other burlesque shows was arranged from already existing material, a lot of it by Offenbach. (In contrast, operettas had brand new scores especially composed for the occasion.)

Fast forward 150 years, and you get Biggy von Blond as a modern day “Berlin Blonde.” She is part of Ades Zabel’s troup that performs regularly at the Berliner Kabarett Anstalt (BKA). The latest offering of this all-male group performing a nearly all female character-show is Hostel Hermannstraße. At the center of this modern-day burlesque stands the character of Edith Schröder who turns her apartment building in trendy but trashy Berlin-Neukölln into a hostel – to rip off tourists and make money for her old age.

It’s quite a mad cap show where all sorts of “ladies” have to help get the hostel running. By doing so, they show women in the audience an over-the-top version of how power women today can behave. By always being obviously male actors, the question how men today should behave, is also indirectly adressed. There are no immediate answers, just like Lydia Thompson didn’t have any either. But the questioning is the interesting part.

The performance of the small group is superb. They present the story – in a brilliant and fluid staging by Bernd Mottl – with crazy vigor and slapstick humor. Plus, they relish all the sexual jokes in the story. Also, they sing marvelously, in true burlesque fashion.

One of the highlights of the show is Stefan Kuschner as Muslima “Hatice.” Her solos are spectacular. And what was even more amazing: there were two veiled Turkish ladies sitting next to me who went absolutely bananas when Mr. Kushner performed his belly dance and parodied a typical Turkish woman’s behavior.

It’s great to see that the burlesque tradition is alive and well, and sells out nightly at the BKA. Mottl has already directed various operettas, Madame Pompadour and Bluebeard among them, but sadly never with Ades Zabel & Co. It would be a real step forward if these contemporary burlesquers could cross over onto the operetta stage and show – in the right operetta! – how much gender-bending fun can be had with characters from classical Opera-bouffe and early operetta.