Last week-end, there were various Gay Pride Marches in the USA, but also in Europe. Our colleagues at Playbill.com took the opportunity and started a poll asking their readers: “What Is Your Favorite LGBT-Themed Show?” The results were published now, with such blockbusters as La Cage aux Folles and RENT high up on the list. It made us at the Research Center wonder if we could come up with an operetta list to equal the Playbill poll. So we’d like to ask you, as operetta fans, to name your favorite LGBT-themed show. 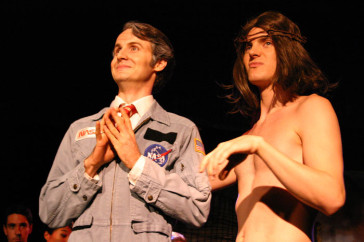 Of course, finding “gay” characters and themes in operetta – a genre from the 19th century when homosexual acts were still a criminal offence in many countries – is a bit tricky. Still, the sexually liberated world of opéra-bouffe and early operetta did allow authors to insert gay topics, if only for comic effect. You might remember the hilarious same-sex love affair in Offenbach’s L’île de Tulipatan (The Island of Tulipatan)? Or the mad infatuation of General Kantschukoff with the cross-dressed Wladimir Michailoff, in Suppé’s Fatinitza? In later periods of operetta history, there were many buffo characters who can be interpreted as “Nance Characters”, such as Benjamin Kidd in Romberg’s The Desert Song. (Remember the scene where he ends up in a Arab harem and is scared of all those lusty ladies? And how he flees from his Western fiancé who wants to bed him?)

In modern times, there are far more open representations of homosexuality on stage, for example in the brilliant The Beastly Bombing: A Terrible Tale of Terrorists Tamed by the Tangles of True Love. The Gilbert & Sullivan style show – about Al Qaida terrorists and White Supremacists, among other things – by Roger Neil (music) and Julien Nitzberg (book, lyrics) premiered in Los Angeles in 2006 and made its way to Europe, where it was seen in Amsterdam, in a successful production of Opera aan het IJ. It had two ultra-butch terrorists fall in love with each other, and a gay Jesus who seduces the President of the USA.

But these are only a few examples of Gay Characters in operetta. (And let’s not forget the Lesbians!)

Now it’s your turn to name your favorite LGBT-themed operetta. And, yes, you may list Patience too.