At the 18th edition of the Schönebecker Operettensommer there’s a brand new Maske in Blau to be seen. While the romantic lead roles are cast with typical opera singers such as Kirilianit Cortes as Armando Cellini and Martina Schilling as the exotic Evelin Valera, the director of this production, Thomas Enzinger, opted for a song-and-dance man like Uli Scherbel for the part of Josef Frauenhofer. 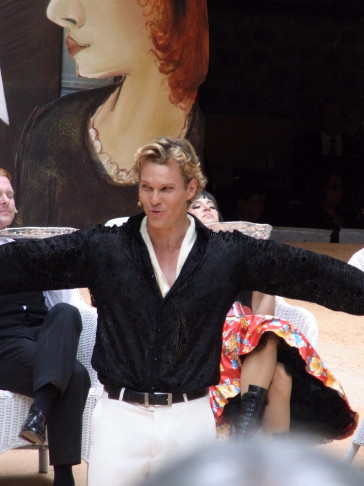 Uli Scherbel in a scene from “Maske in Blau”. (Photo: U. Scherbel)

Scherbel obviously has a very different background than the other classically trained singers – who might be great singing Mozart, but who cannot sweep the stage, dancing, like he does. While usually busy with big shows such as Ich war noch niemals in New York, and Gershwin’s Crazy for You at the Musikalische Komödie Leipzig, Scherbel has chosen Maske in Blau to try out a new genre – operetta. We caught up with him after the successful first night in Schönebeck, still hot and sweaty, and asked him how he experienced the first steps into a new world.

What is it like to sing operetta, as opposed to musicals?

I enjoy singing both genres, actually. The only difference is that I color my voice a little more “classically,” when you sing musicals, usually, a more poppy sound is required.  So it’s a question of vocal coloring. In terms of content of the songs themselves, I see no difference. I study the score and the lyrics with the conductor and the stage director, and then we come up with an interpretation, and that’s the same process, no matter what you sing.

Which operettas – other than Maske in Blau – would you like to sing on stage?

Definitely the White Horse Inn, the Merry Widow, Künneke’s Vetter aus Dingsda maybe – shows that involve a lot of dancing! When all three aspects come together, i.e. singing, dancing and acting, I love performing in operettas. 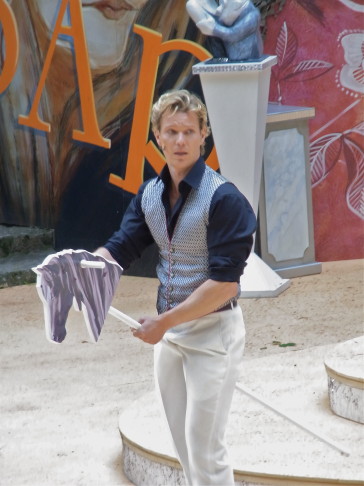 Another scene from “Maske in Blau”, with Uli Scherbel. (Photo: U. Scherbel)

Are the people in today’s operetta business different to your typical musical comedy crowd?

If they love both genres equally, then there usually is no difference between the groups. But a certain lightness and humor is essential to both these forms of popular musical theater. If the current makers of musicals and/or operetta have a secure feeling for staging scenes of seduction and flirtation, then a great production is guaranteed.

I believe that today, because of the internet, we have lost our ability to flirt – and to do so with charm, real charm. It’s an art we can learn – or re-learn, in this case – by performing operettas. Anyone who can handle “Ich küsse Ihre Hand, Madame!” can handle anything, and set an example for a new generation.