Last Friday at New York’s Town Hall marked a major event for historians of musical theatre. For one night only, on June 27, a historic re-creation of Cole Porter’s lost Paris night-club revue from 1928, The Ambassador Revue, was presented with a cast of five principals, four dancers, and an on-stage jazz band of seventeen. First of all, we have producer/director Ken Bloom and bandleader Vince Giordano to thank in equal measure for what was an amazing evening. 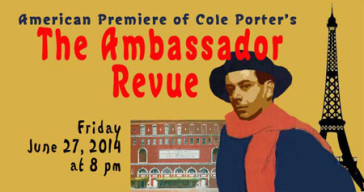 Poster for the New York performance of “The Ambassador Revue”.

It is so rare that we now get to hear any musical of this era with its original orchestration, that anticipation truly built to a fever pitch before we heard so much as the first note. But this is an unknown Cole Porter score, just before he hit his stride with 5 consecutive Broadway hits (1928-32): Paris, Fifty Million Frenchmen, Wake Up And Dream, The New Yorkers and Gay Divorce. The only comparable moments of thrills and wild anticipation I can recall in recent memory were discovering Pleasures and Palaces (Lyric Theatre of Irving, Texas), The Firebrand of Florence (Ohio Light Opera, then Collegiate Chorale in NYC), and Cotton Club Revue, St. Louis Woman and Face the Music (Encores). Vince Giordano and His Nighthawks (best known worldwide for their work on TV’s Boardwalk Empire) were playing Fred Waring’s original orchestrations, which had just been rediscovered since the Paris 2012 performance. In addition, a wholly unknown, lost Porter tune without lyrics was found, “Rippling Stream.”

The band with duo pianos (legendary Peter Mintun at one) at either side was onstage center, very much like Max Raabe and His Palast Orchestra, with a table and café chairs at either side of the proscenium, and three old-fashioned standing radio microphones across downstage.

Vince effectively ran the show, his count announcing the start of each musical number. Those first strains of jazzy Porter to the infectious, toe-tapping “Keep Moving” (this music only now just re-discovered) with eccentric tap dancer Ted Levy were heady stuff indeed. Next up was “The Lost Liberty Blues” sung by opera soprano Amy Burton, dressed as a desultory Statue of Liberty and a drooping torch. (This, “Looking at You” later used in Fifty Million Frenchmen, and “Pilot Me” were the only songs I knew at all.) But then the damned sound system started to screech, and it became sadly apparent that the evening’s vocals, racheted up to be heard above the band, would be a recurrent problem. Since we were sitting in the front center of the loge, I knew the sound for everyone behind us would be worse! I had to cup my ears to hear Porter’s lyrics. 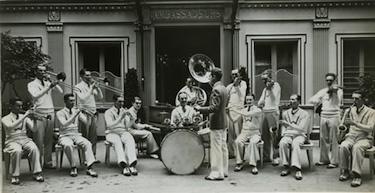 Fred Waring and The Pennsylvanians, part of the “Revue des Ambassadeurs,” pictured in front of the club in 1928.

The ensemble number “Omnibus” (American tourists oggling Paris) was better; it was familiar as “Do You Want to See Paris” from Fifty Million Frenchmen. Then hooray, Jason Graae did a spectacular version of “Pilot Me.” Why we’ll never know, but he alone among the 5 singing principals, had the best command of the stage, his material and the microphone. Every lyric of his was crystal clear. Jason won big laughs by simply titting his head, outspread arms and torso to one side and then the other to suggest an airplane. Tom Wopat followed with “In a Moorish Garden,” one of his three generic, sadly forgettable baritone solos; if only Brent Barrett hadn’t been doing Chicago, he’d have been far better. Well-known jazz singer Catherine Russell followed with “Almiro”, a tribute to her Brazilian dancer lover. Soprano Amy Burton followed with a charming “You and Me.” Then back again was Jason Graae with hoot of a silly novelty song “Fish;” in anyone else’s hands it would have been a throwaway, but like Porter’s later “Tale of the Oyster” Jason mined every shred of salacious humor from the song. Next up was a trio for the 3 ladies, Amy Burton, Anita Gillette and Catherine Russell, “Military Maids.” Alas, its lyrics of predatory females on the loose were pretty much sacrificed to the terrible speaker system.

In the 1928 production, Frances Gershwin (accompanied by her brother at piano on opening night) followed with a medley of early Gershwin tunes.

Here, we got Catherine Russell doing a gorgeous “The Man I Love”, with Porter’s spoken intro “I happen to be the sister of a rhythm twister…”, but there followed a medley of early Porter hits (“You’ve Got That Thing,” “Let’s Do It,” “Let’s Misbehave,” “Love For Sale” and “Night and Day”). Although welcome contextually, it was odd to hear songs we knew so well, performed instrumentally, with ensemble band vocals; trumpet player Bria Skonberg stepped up to do a French vocal of “Nuit et Jour.” But that medley added length to what would be a two hour evening with no interval.

The somewhat known “Looking at You” followed in the capable hands of Jason Graae; added originally to the Ambassador Revue when Clifton Webb joined the cast, it later re-appeared in Wake Up And Dream. 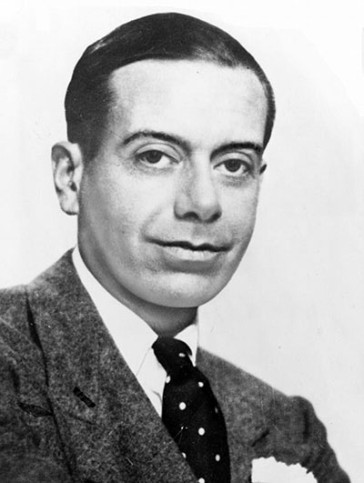 The woeful Wopat followed with a torchy “Blue Hours,” but even the added appearance of dancers Randy Skinner and Sara Brians did little to ignite. Anita Gillette did the cute “Alpine Rose,” a comedic wallfower comedy song; as capable as Anita Gillette was/is, there’s a limit to this old gal’s determined charms. Another rousing song & dance, “Boulevard Break” whose music had only just re-discovered, followed, a pre-cursor to Porter’s “Blow, Gabriel, Blow,” led by Catherine Russell and the 3 dancers. That totally unknown instrumental, “Rippling Stream” followed; what a charming tune! Graae & Gillette duetted with “Hans,” a cute novelty about an aging Hansel and Gretel; made me think of Dietz & Schwartz’s “I Love Louisa.”  Next, “Baby Let’s Dance” a fast-stepping duet for dancer Ted Levy & a gal. Catherine Russell & Tom Wopat tried to breathe some life into their plea for “An Old-Fashioned Boy” and “An Old-Fashioned Girl;” number demands some clever staging or starry charisma to make it interesting. For the finale, “Fountain of Youth,” in which Jason Graae led the entire company.

Happily, director/producer Ken Bloom expected to record the evening live for Harbinger, and it may make a better live recording, with the audible lyrics and sound amplification problems hopefully fixed (maybe they recorded the rehearsals too?).

The evening might have benefitted from more rehearsal, better casting (apart from Jason Graae), and a larger dance component. Skinner’s choreography was just OK, but as one white-haired gent paired with two much younger girls, it left you craving a real line of chorus girls. So we were left with an often magical, occasionally tedious, often inaudible revue of obscure Porter, wishing for what might have been. I wouldn’t have missed it for the world!

Editor’s Note: The original revival version was created by Christophe Mirambeau in Paris, 2012 in concert. Then there were performances in December/January 2014 in Rennes. The performances were broadcast on the radio, by France Musique. So, yes, there is a tape with full orchestra!