For many operetta fans, Offenbach’s Orpheus in the Underword is the masterpiece with which it all began, back in 1858. For the rest of the world it’s the show that first presented the notorious can-can, a tune that nearly everyone in the Western world knows. It’s become part of our cultural DNA. Something very few pieces of music achieve. Now, the Staatsoperette Dresden presents a 140-page book on this Orphée in what could turn into a little operetta series published by Thelem/TUD press. It’s part of the Technische Universität Dresden. Thelem was founded in 1998, while TUDpress was founded in 2005. They have produced and marketed more than 400 titles, mostly covering topics that are Dresden-related. 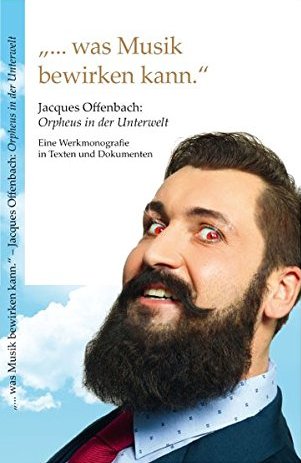 The cover of the Thelem Press book on Offenbach’s “Orpheus,” 2016.

There are nine German language essays in “…was Musik bewirken kann.” Jacques Offenbach: Orpheus in der Underwelt, edited by Heiko Cullmann and Michael Heinemann. They cover the general basics without ever going into any controversial or ground shaking new fields. Dieter David Scholz writes about “The Beginning of a Genre” [“Beginn eines Genres”], while the unavoidable Peter Hawig presents his musings on a world-hit [“Betrachtungen zu einem Welterfolg”] which correspond with his well-documented musings elsewhere. Jean-Christophe Keck discusses the rediscovered ballet music, Stefan Frey talks about the can-can and “other infernal dances,” Ludger Udolph analyzes the popularity of the Orpheus myth in the 19th century [“Panoptikum des Wahnwitzes”]. A topic that is expanded by Ulrike J. Sineknecht, Stefan Heinemann talks about L’Opinion publique before Mr. Keck compares the four different Orpheus versions in circulation. And, there’s a documentation of the press feud surrounding the world-premiere, back in 1858. 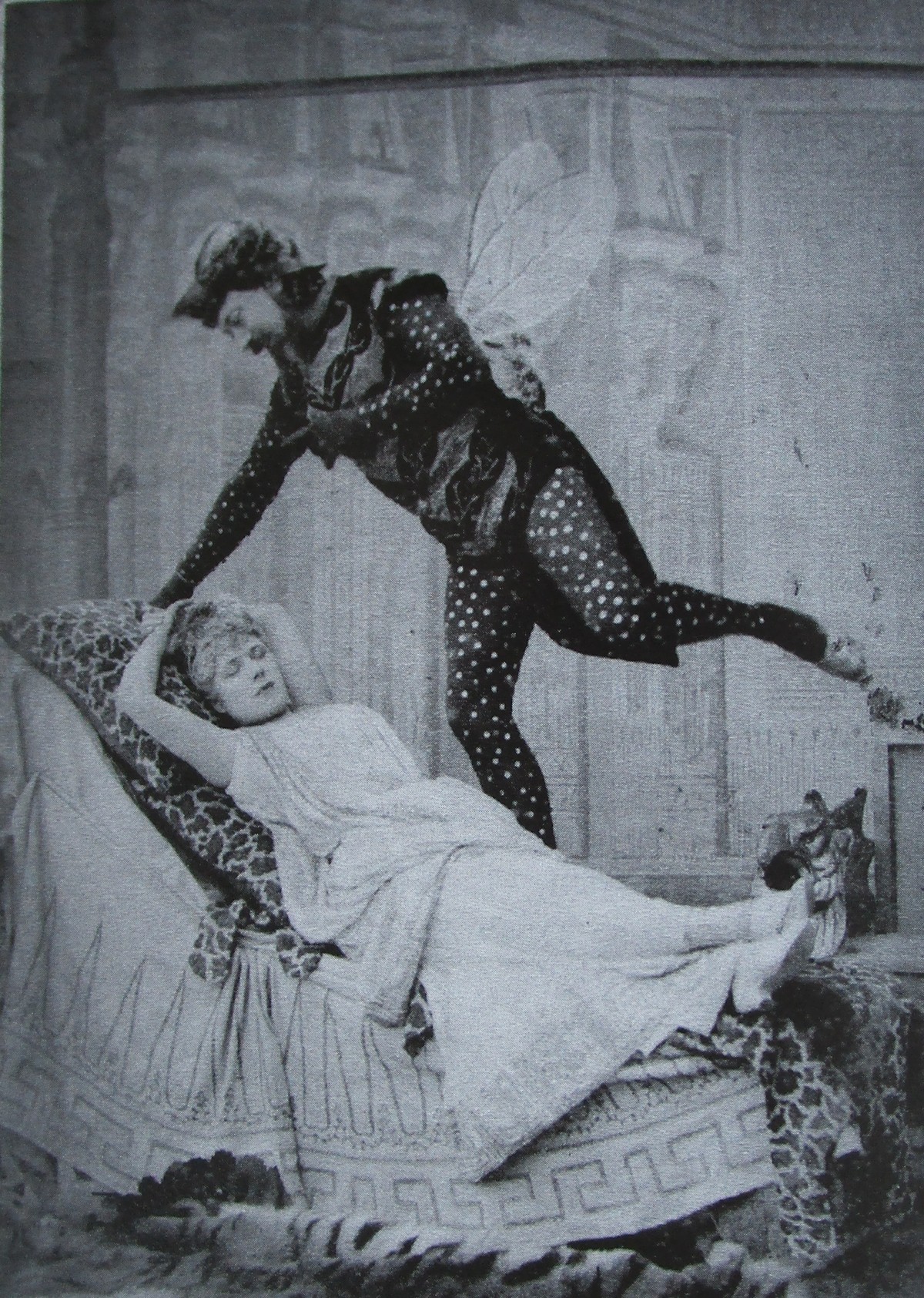 Jeanne Granier as Eurydice and Eugène Vauthier as Jupiter in 1887, photo by Nadar from the collection of Laurent Fraison. (From “…was Musik bewirken kann”, Thelem Press 2016)

Considering how radical these early operettas were, it’s kind of astonishing (to me) to witness the tameness of the various interpretations here. You’d never believe that Orpheus and Offenbach caused such a scandal in the mid-19th century when reading these essays (Stefan Frey’s excluded). You’d also never guess it from looking at the harmless cover photo of a bearded man wearing a red tie and slightly unfashionable blue shirt. But there is more to this book than the boring cover and middle-of-the-road texts: there are lots of amazing historical photographs.

These images are glorious, many will be familiar from other publications on Offenbach, some will be fairly new to most readers, e.g. those from the Collection Laurent Fraison. They alone make this book worth buying. And I wondered if we could not, please, have a coffee table book with all these glories in large-size and possibly in color? 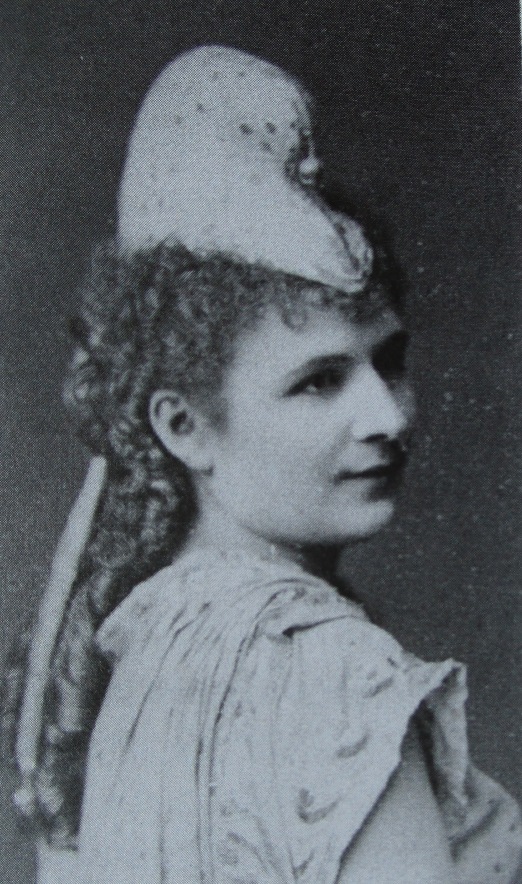 Elvire Gilbert as L’Opinion publique in 1874, photo by Ulric Grob from the Collection Laurent Fraison. (From “…was Musik bewirken kann”, Thelem Press 2016)

Some of the photos and prints had already been presented by the Musée d’Orsay in 1996 in their exhibition Offenbach, of which there is a must-have catalogue. Since this new Dresden book focuses on Orpheus alone, there is more material on that particular show than there was in the Paris catalogue that covered Offenbach’s entire career. 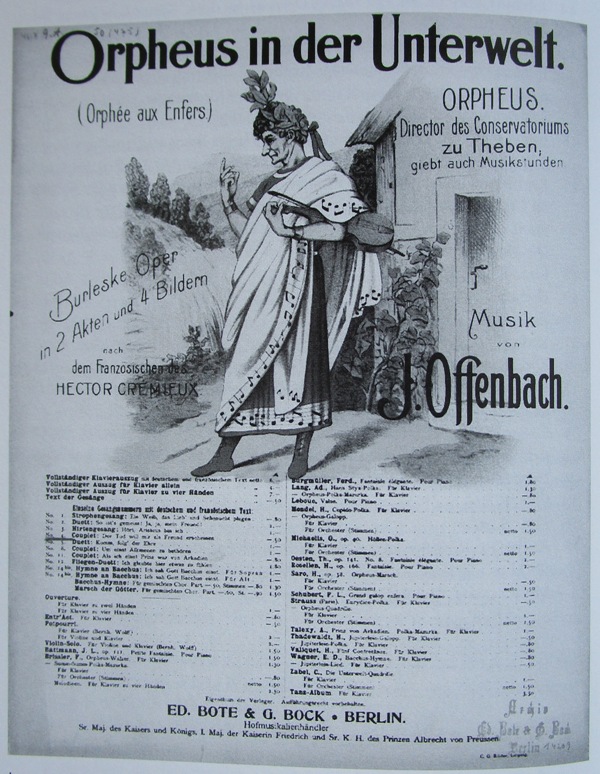 If this new “Werkmonografie in Texten und Dokumenten” is intended as a typical easy access study suited for all ages and people, then it is perfectly suitable for school use as a first introduction for German speaking teenagers. If you are already familiar with operetta and Offenbach, you’ll want more – more questions, more social context. This book reads as if Feminism and Gender Studies never happened, as if the genre operetta never had anything to do with breaking norms of social behavior, questioning gender roles, discussing power balances in erotic and political relationships, asking how we wish to deal with outcasts… And if you think you’ll get the famous Cora-Frost-as-Cupid-story in this book, you’ll be disappointed. (I was.) 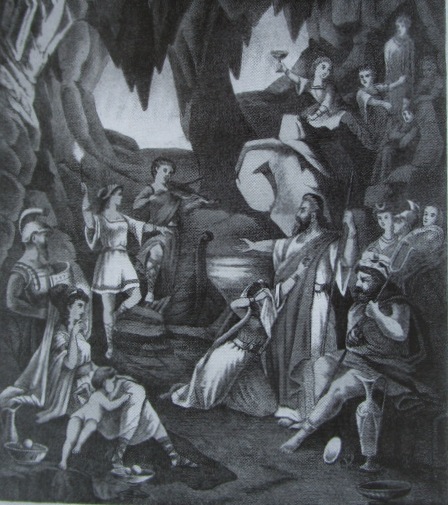 Cover illustration by Edouard Dorn for a piano transcription of Offenbach’s “Orpée,” from the Collection Laurent Fraison. (From “…was Musik bewirken kann”, Thelem Press 2016)

Nonetheless, I look forward to seeing what the Staatsoperette Dresden will come up with next and whether this will turn into a series. Possibly also in English, one day, for all the international visitors and operetta fans? Compared with what the international researchers presented at the operetta conference of the Komische Oper Berlin (also available as a book) this research seems severly “out of date.” But maybe that’s part of the Saxonian charm?