It’s a grand day in Moscow today, filled with military parades. Perhaps it’s the appropriate time to remember one of the greatest Russian operettas too, and especially a superb film version of that operetta: Dmitri Shostakovich’s Op. 105, Moscow, Cheryomushki about a district in Moscow full of cheap subsidized housing built in 1956. 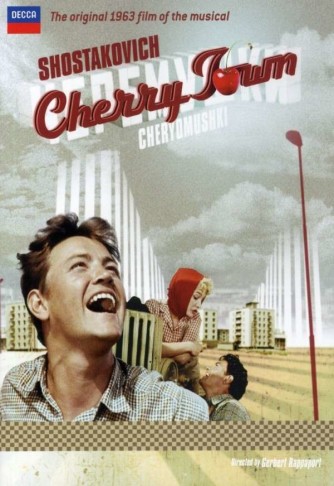 Cover for the Decca DVD release of “Cherry Town.”

The operetta is a kind of Russian “Street Scene,” only with a very socialist twist. That is hilarious to watch. The show premiered in 1959, with popular music filled with satiric elements. Because of the success, it was turned into a movie in 1963 by Gerbert Rappaport, for Lenfilm. It was released under the title Cheryomushki. Decca released the film on DVD as Cherry Town. But you can actually see the full movie on YouTube today.

This filmed operetta is a blast, actually. Some scenes are so wildly over the top, that you feel transported back to the madcap Offenbach days. One user on the International Movie Data Base writes: “The relatively slight plot concerns the initial struggles, and settling in, of several people into their new housing estate. They are principally a newly married couple as well as a blast engineer name of Boris – played here by the vaguely Danny Kaye-ish actor Vladimir Vasilyev – who has his bachelor eye on museum guide Lida (Olga Zabotkina), and the frustrations encountered by all. Despite the frustrations of incompetent officialdom – the estate manager Batabashkin is corrupt and his superior Drebyednystev is a bureaucrat whose second wife wants a bigger flat, expanding into that previously allocated to the hero and heroine – all eventually is settled good naturedly. ‘Cherry Town’ is a generic title apparently given by the appreciative inhabitants on any new housing estate and this one is a place full of flirtation, sun and song, mostly bright and breezy through the running time, even if as a filmed musical piece it misses the exuberance and smoothness of well-oiled American cinema. It’s more revealing to compare it to the just as romantic Russian favourite Ironiya sudby, ili S legkim parom (aka: The Irony Of Fate) made a decade later. There love is also discovered on housing estates that (its key plot point) look exactly the same, due to the central control over Soviet builds. Such conformity means that, no matter in which city you find yourself, only love brings the unexpected in a regimented environment. But with Cherry Town, love is just the icing on the cake.”

The operetta has been seen on stage quite frequently in the West in recent years. But, truth be told, it is very hard to top the visual and musical excitement of this movie version. It’s operetta glory all the way through. And together with The Beastly Bombing (2006) one of the few examples of a fully convincing modern-day operetta. So, yes, it is possible to write valid operettas after WW2.