He was Weimar Germany’s answer to Barry Manilow, the most popular entertainer and songwriter of his generation, writing hit after hit for some of Europe’s most celebrated performers. His face was on the silver screen and his voice emanated from every radio on the continent. He was, however, Jewish at a time when your fame, your talent, or your connections didn’t matter. He was Willy Rosen and, although the memory of this genius has been lost over the years, his story is remarkable, reading more like a Hollywood script than a work of narrative nonfiction. 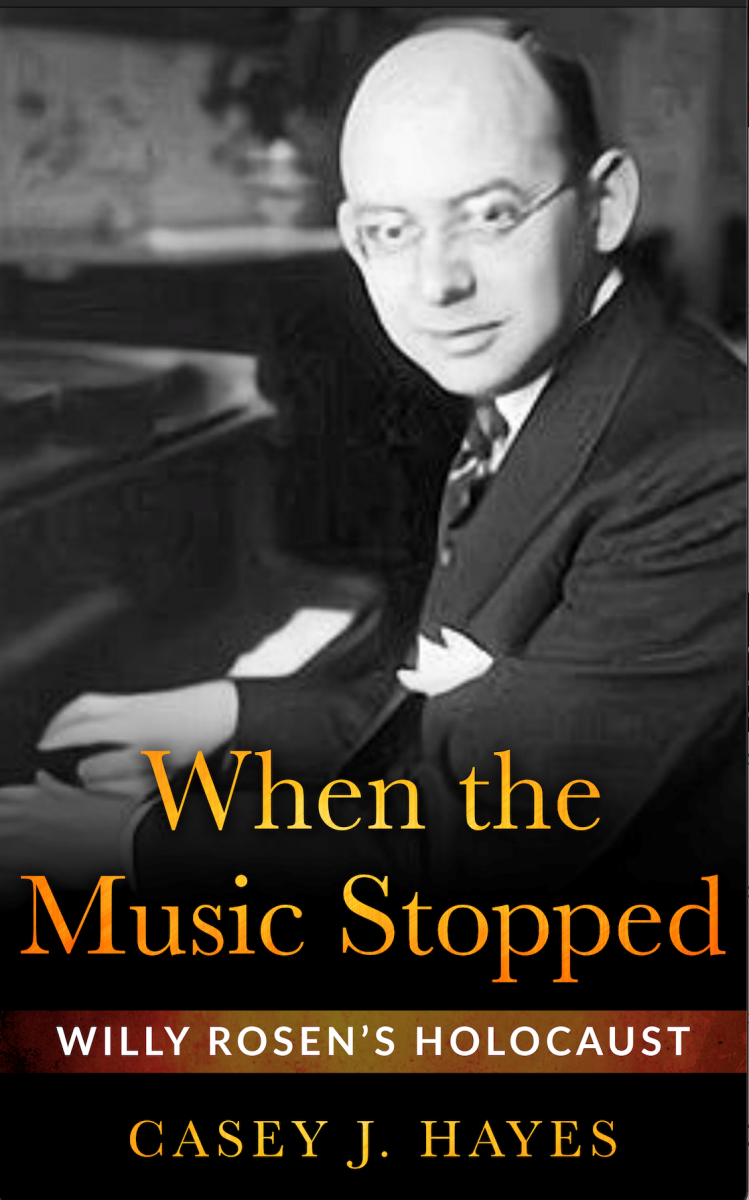 The cover of “When the Music Stopped…Willy Rosen’s Holocaust.”

Having spent over two decades as Germany’s most celebrated “One-man show,” Rosen was forced to flee to Amsterdam in exile and divorce his non-Jewish wife.

After the occupation of the Netherlands, Rosen was captured by the Nazis and forced to aid in the round up and deportation of 140,000 Dutch Jews; ironically out of the former theater-turned-collection center where Rosen headlined.

Being sent to the Westerbork Transit Camp, Rosen formed a theater troupe with several of Germany’s top actors, singers, comedians, and dancers, performing revue after revue, singing and dancing and playing for their lives in the hope of preventing the inevitable – deportation to the East.

For almost two years, Rosen and his troupe had the finest cabaret in Europe, and it was at Westerbork, a Nazi transit camp! Imagine being one of the performers before the war; you are the most recognized faces and voices in Germany, now reduced to performing every month for the Commandant of the camp and his never-ending parade of top SS and Gestapo officers.

Your only hope was that the performance would please them enough to allow you to live for another day. This was the pattern of their fragile existence until the Allied occupation of the Netherlands forced the closure of the camp, with Rosen and Company being deported to Theresienstadt and finally to their ultimate deaths in Auschwitz.

The upcoming book When the Music Stopped…Willy Rosen’s Holocaust by Casey J. Hayes takes the reader from Rosen’s earliest musical training in Magdeburg, through his earning of the Iron Cross in WWI to his ultimate rise as the Republic’s first Alleinunterhaltungskünstler, or “One Man Show”; singing, composing, acting and working alongside the likes of Claire Waldoff, Louis Davids, “Cuddles” Sakall, even heavyweight boxing champion Max Schmeling.

His enormous catalogue of over six hundred musical titles, a dozen movies and scores, and thousands of performances have been lost to history until now. This amazing man, his works, and his story deserve to be told.

When the Music Stopped…Willy Rosen’s Holocaust is the result of three years of research across Germany, Austria, and the Netherlands, where Hayes pored over archives to uncover the actual language, street names, addresses and song titles as well as life events of this remarkable man.

All events within the story are real, the dialogue recreated from research into the writings, both direct and indirect, of Rosen and his colleagues. The chapters follow a timeline. Beginning with Rosen being injured on the Eastern Front during WWI and receiving the Iron Cross, When the Music Stopped…Willy Rosen’s Holocaust reconstructs his youth through flashback and ends with Rosen’s death in the gas chambers of Auschwitz.

The remarkable life that unfolds between these events shows how the human spirit can create beauty amidst horror, how one must perform to live another day even as those around you are taken away.

The book comes out on 27 January, 2022, which is Holocaust Remembrance Day.

For more information on the Amsterdam publishing company, click here (the book is not yet listed).